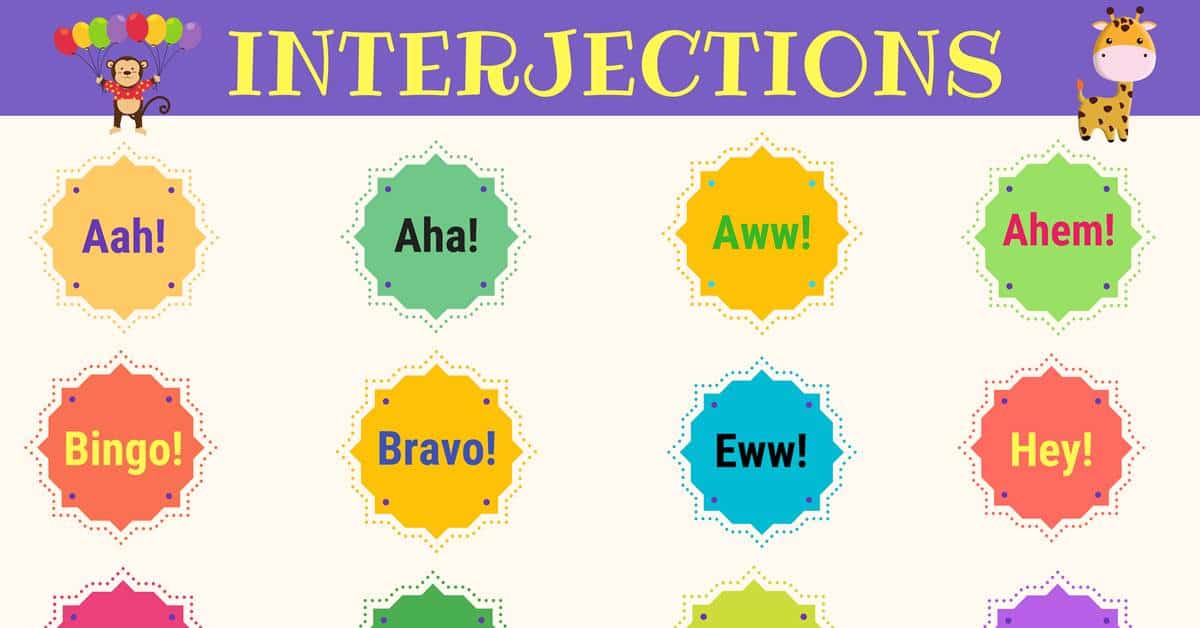 What is an interjection? If you are familiar with the English language, or just languages in general, you may have heard about interjections. Interjections are parts of speech that may be written or spoken and can have multiple uses — depending on the context, situations, and the intent of the users involved. But what exactly are interjections and how do you use them? This article will explore the definition of interjections, when to use them, and how they compare to exclamations, emoticons, emojis, and onomatopoeia.

What is an Interjection?

An interjection is a word or short expression that normally lacks a grammatical connection to larger patterns of speech. It is expressed as an utterance that stands by itself, one that can be emotional, directive, or exclamatory in nature.

An interjection is an exclamatory word or phrase used to express a weak, mild, or strong feeling or emotion. It is a part of speech in English grammar.

Interjections are normally defined by their short duration (usually single or double-word phrases) and reactive, or spontaneous, use. Examples include exclamatory phrases (“Oh!”, or “Ooh!”), swear words (“Damn!”, or “Dang!”), hesitation markers (“um”, or “er”), and responsive particles (“Yes!”, or “Ok”).

Additional interjections can include greetings (“Hey!” or “Hi there”), expressions of dismay (“Oh no!”, or “Aw, man”), and imperative/directive phrases (“Look!”, or “Do it!”).

Interjections can overlap with what are considered discourse markers (words that can manage the flow of discourse, i.e. “you know”, “well”, “I mean”, “then”), linguistic fillers (words to indicate a pause in thinking without completion of speech, i.e. “uh”, “um”) and profanities.

When To Use Interjections

Using an interjection is a great way to bring life to a conversation. The interjection can be anything from a greeting to a curse or an exclamation. They can be used as independent sentences in response to a comment or situation and are great for making you sound like a native English speaker.

Formal conversations (and settings) call for less interjection use overall. There is an emphasis on listening, discussion, and the completion of thought in full phrases. Socially suitable interjections (“Oh”, “My word!”, “Yes”, and “Quite”, for example) are considered acceptable in formal settings.

In texting, interjections can be used with varying degrees of frequency — depending on relationship types and context.

Interjections would be more common in texts among friends, romantic partners, or casual acquaintances, but this can also depend on the type of relationship between those texting.

A short “Ok”, for example, might be appropriate in texting for one situation (say, during the day-of correspondence in planning a party) but may seem rude if given during a heart-to-heart discussion.

A degree of familiarity may be needed before interjections are more frequently used in texts. Among friends, interjections in texts may follow the conventions of discussions with these friends in-person.

If there is work correspondence or texting to superiors, limited, more formal interjection use is recommended — though this may vary, as well.

In writing, interjections can be used as speech patterns in fictional prose (‘”Wow!”, she exclaimed.’), as quoted speech in non-fiction news articles (‘”Got it!”, the union workers shouted’), in poetry, personal essays, biographies, or in advertising (“Save!”, “Look!”).

Interjections are generally not acceptable in non-fiction, informational, technical, academic, or scientific writing.

Casual e-mail correspondence — a back-and-forth among work colleagues or friends, for example — may be more conducive to interjection use than e-mails between employees and superiors.

Advertising and marketing e-mails may use volitive interjections to attract customers.

Exclamations are longer, more meaningful phrases (“What a wonderful day it is!”, or “This is incredible!”) whereas interjections tend to be one or two-word phrases with simpler expressive meanings (“Oooh!”, “Argh!”, or “Oh, no…”).

If you use interjections in texts or e-mails, exclamation point (“!”) use is strongly discouraged. This is because expressive meaning is often implied with the interjection itself.

This can, however, vary depending on casual business use (“Thanks!”) or strong emphasis among casual friends (“Darn!”).

In writing (fiction or non-fiction articles) for an audience, the exclamation point is necessary to show interjection as a part of speech.

Emoticons (“emotion icons”) are representations of facial expressions using characters (usually typed) to convey emotions. These can include the smiley face 🙂 or the frowning face :-(, among others.

Emojis (Japanese for “picture characters”) are small digital illustrations that can express facial expressions as well as objects, plants, and animals. Unlike emoticons, they are not comprised of typeface characters, but actual stylized illustrations.

In casual text slang messages among friends, emoticons and emojis are relatively common. They are, however, strongly discouraged for use in professional or formal emails and texts.

In this sense, interjections may actually be more common in formal/business e-mails or texts (such as in “Thanks!” or “Yes”) but limited use of interjections in these situations is still recommended.

Onomatopeia is the construction of words that phonetically imitate existing sounds, such as animal sounds (“Moo”, “Meow”, “Woof”) or other sounds (“Bang”, “Boom”, “Zoom”).

Interjections differ from onomatopoeia in that they are often singular words that have a determined meaning but do not imitate sounds. Interjections are exclamatory or can evoke emotion, while onomatopoeia is not meant to evoke meaning — only words that replicate an existing sound effect.

Examples of Using Interjections in Sentences

In this section, we are going to be looking at a variety of interjections and learning how we can use them in our day-to-day conversations.

“Aha! So you planned all this, did you?”

Ahem meaning: The sound of clearing one’s throat. Used to get someone’s attention, especially if they don’t know (or apparently forgot) that you’re there.

“Ahem! Can I make a suggestion?”

“Argh, get that cat off the table!”

“Bah, I never liked him anyways.”

Bingo meaning: Acknowledge something as right

“Bingo! That’s the one I’ve been looking for.”

Expressing surprise:v“Dear me! What a mess!”

Duh meaning: Expressing annoyance over something stupid or obvious:

“Duh, you should always lock up your bike.”

“Lima is the capital of…er…Peru.”

Hah meaning: The first syllable of “hahaha”, when something is just a little funny

Humph meaning: A snort, to express dislike, disbelief or annoyance

“Humph! That makes me so upset! The kitten is so mean!”

“Meh, there’s nothing great about it.”

“I switched the sugar and the salt! Muahaha!”

Ooh-la-la meaning: An often ironic (or just funny) way indicating that something is fancy or high class

“Ooh, what a lovely dress!”

Oomph meaning: A grunt made on sudden exertion. Also used as a noun to mean “power” or “energy” (“This song needs more oomph!”)

Oops meaning: Being surprised at or acknowledging your own mistakes

“Oww, you stepped on my foot!”

“Ouch, that hurt! Stop pinching me!”

Oy meaning: Mainly Jewish, Used to express self-pity, similar to “woe is me!“

“Pff, I once caught a fish twice that size!”

Psst meaning: Used to quietly get someone’s attention, often to tell them a secret.

“Psst. Let’s get out now before they see us!”

Shh meaning: Used to make someone be quiet

Shoo meaning: Used to drive away animals or small children

“Tsk-tsk, I think you’re wrong about that.”

Uh-oh meaning: Concerned for indications that something will happen

“Uh-oh, I think I just deleted all my work.”

Uh-uh meaning: Refusal, especially if your mouth is full or if you refuse to open it

Uhh meaning: Indicates a pause in, rather than the end of, a sentence

Wee meaning: Used by children when doing something fun, and often ironically by adults when something is fun but childish

Whoa meaning: Can be used to suggest caution as in here, and also stereo typically used by marijuana smokers to express dumbfounded amazement (“whoa, look at the colors!”). Originally a sound used to make horses stop.

Meaning: Used as a replacement for yeah, comes from Middle English

Meaning: Responding to a remark in a disapproving manner. It shows that you are offended or annoyed by a remark directed towards you.

“Yah! I didn’t say anything to him”

“Yay! Gilas is in for the Quarterfinals!”

“Yeah! She’s going with us tonight!”

“No school for five weeks – yippee!”

Yoo-hoo meaning: The often ironic/comical, seductive call of a woman to get someone’s attention

“Yoo-hoo, buttercup! Come give me a hug!”

Yuh-uh meaning: Childish affirmation often used to counter “nuh-uh!” (not to be confused with yoo-hoo).

“YEET! I can’t believe I just passed my driving test!”

“You’re so stupid! You’d trip over a wireless phone!” “Zing!” 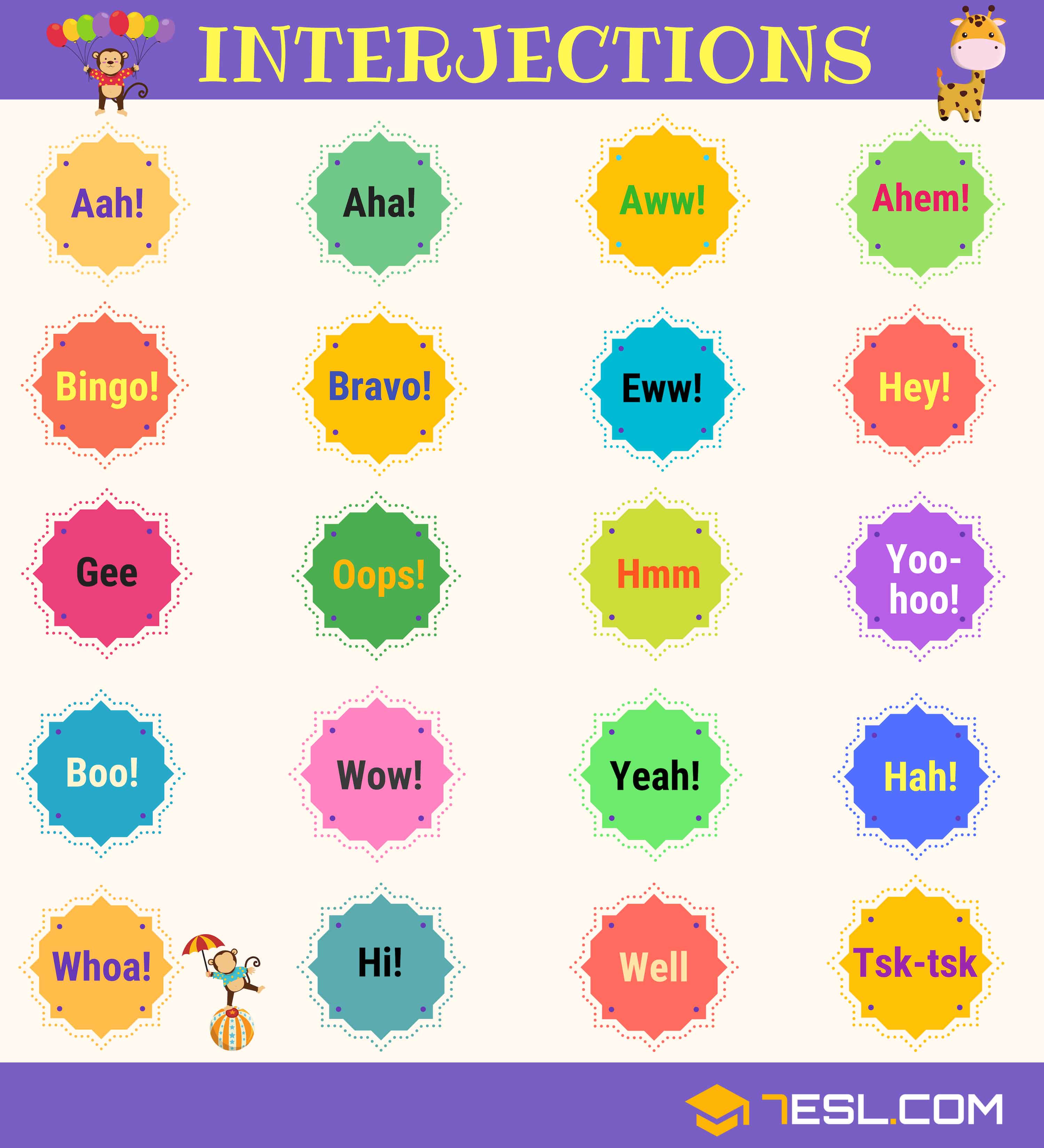 Examples of Interjections in English | Image 2 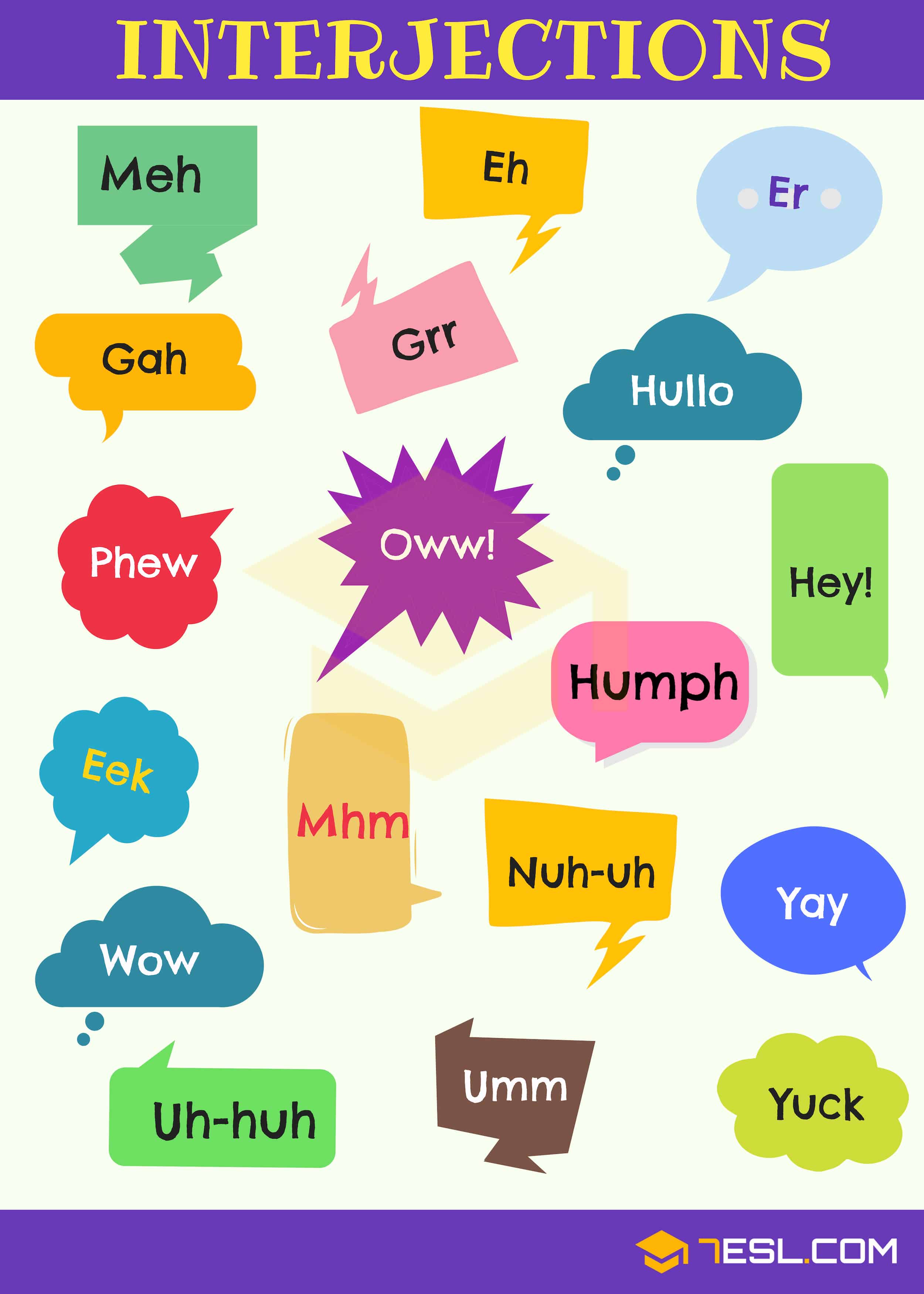 thank you soooo much!!great video great content,thanks for you guys work on it