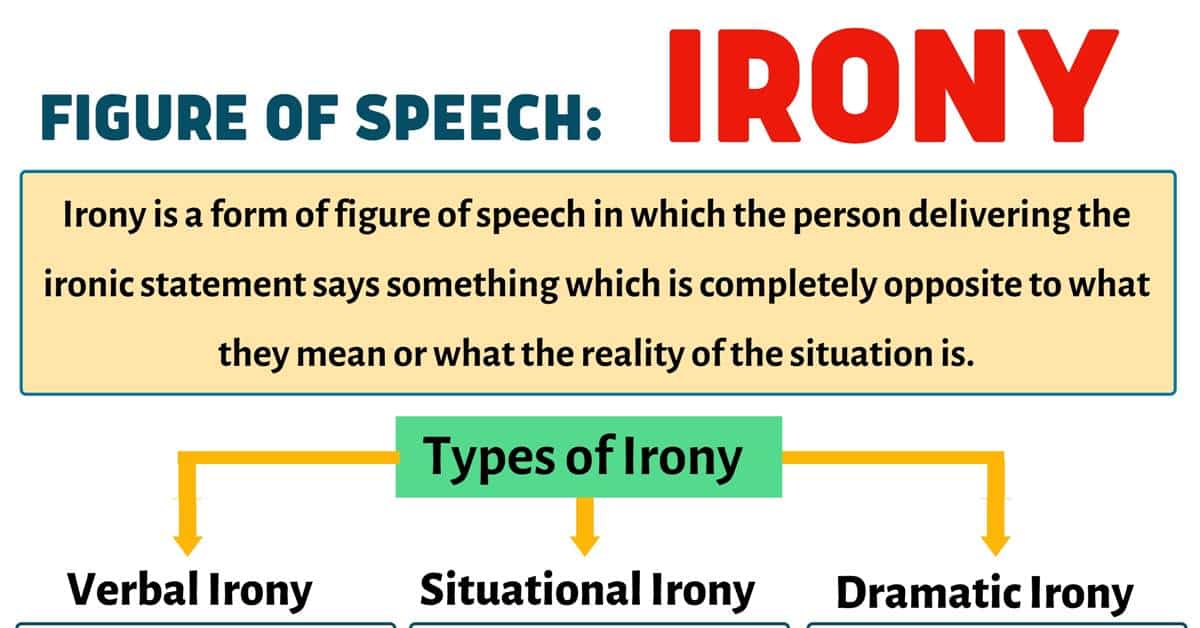 What is Irony? There may be many times that you will hear the use of irony in an English conversation or see it in written text, but it can be confusing to understand if you are not sure how it is used. In this article, we are going to look at what irony is and what different types of irony there are. We will look at examples of these different types of irony used in both the literature and in everyday situations.

Irony is a form of the figure of speech in which the person delivering the ironic statement says something which is completely opposite to what they mean or what the reality of the situation is. Irony can also be used to set the tone of a situation without the use of any speech at all.

Irony can be used in a sarcastic sense to display the opposite meaning of what is happening in reality.

What are the different types of irony?

There are three different types of irony, each of which is used in a slightly different way but all have the same meaning of showing the opposite of what is happening.

The first type of irony is verbal irony which is used in speech. It is used when a person wants to express something using speech which says the opposite of what they mean. For example, if it were a very cold day, a person using verbal irony might say something like; “Isn’t it warm today!”

The second type of irony is situational irony. This is used when a situation does not have the outcome which was expected in the first instance. For example, if a fire station were to burn down, this would situational irony as this is the building that is meant to protect from fire.

The final type of irony is dramatic irony which is when an audience knows a situation or information which the character is not aware of. In a real-life situation, it is applied when something happens and the person within the situation is unaware of the true reality. For example, if a person were to say “I am so glad that I wasn’t in that car accident”, only to be involved in a car accident moments later, this would be dramatic irony.

Examples of Irony in Speaking

We are going to look at irony in spoken language which you may hear day today.

Examples of Irony in Literature

There are many times in which writers will use irony within their work to give a contrasting or contradictory meaning to it. We will now take a look at some examples of times irony has been used in written work

Irony can be used in both day-to-day conversations and situations as well as being regularly used within written texts such as novels, plays and songs. 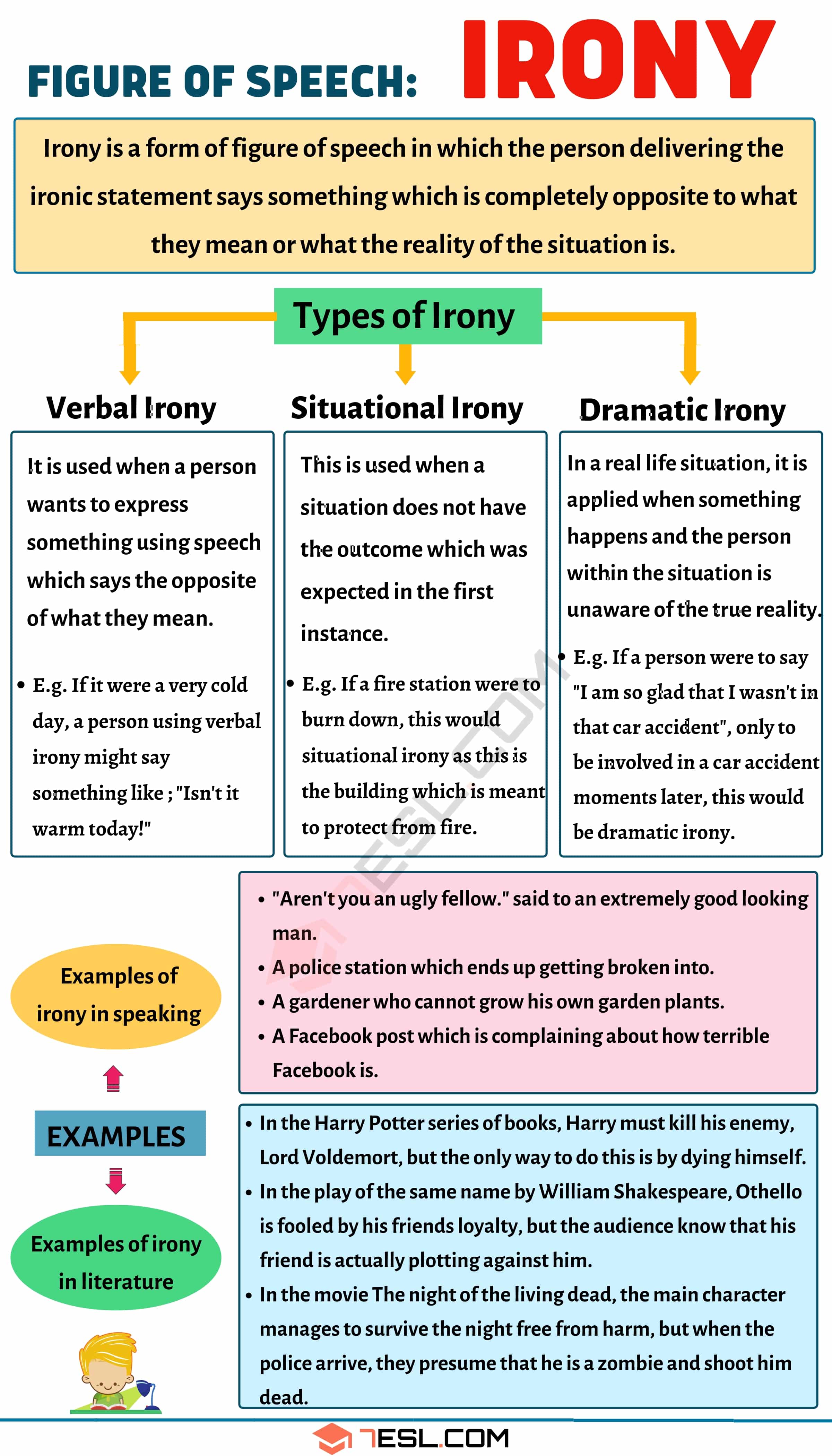 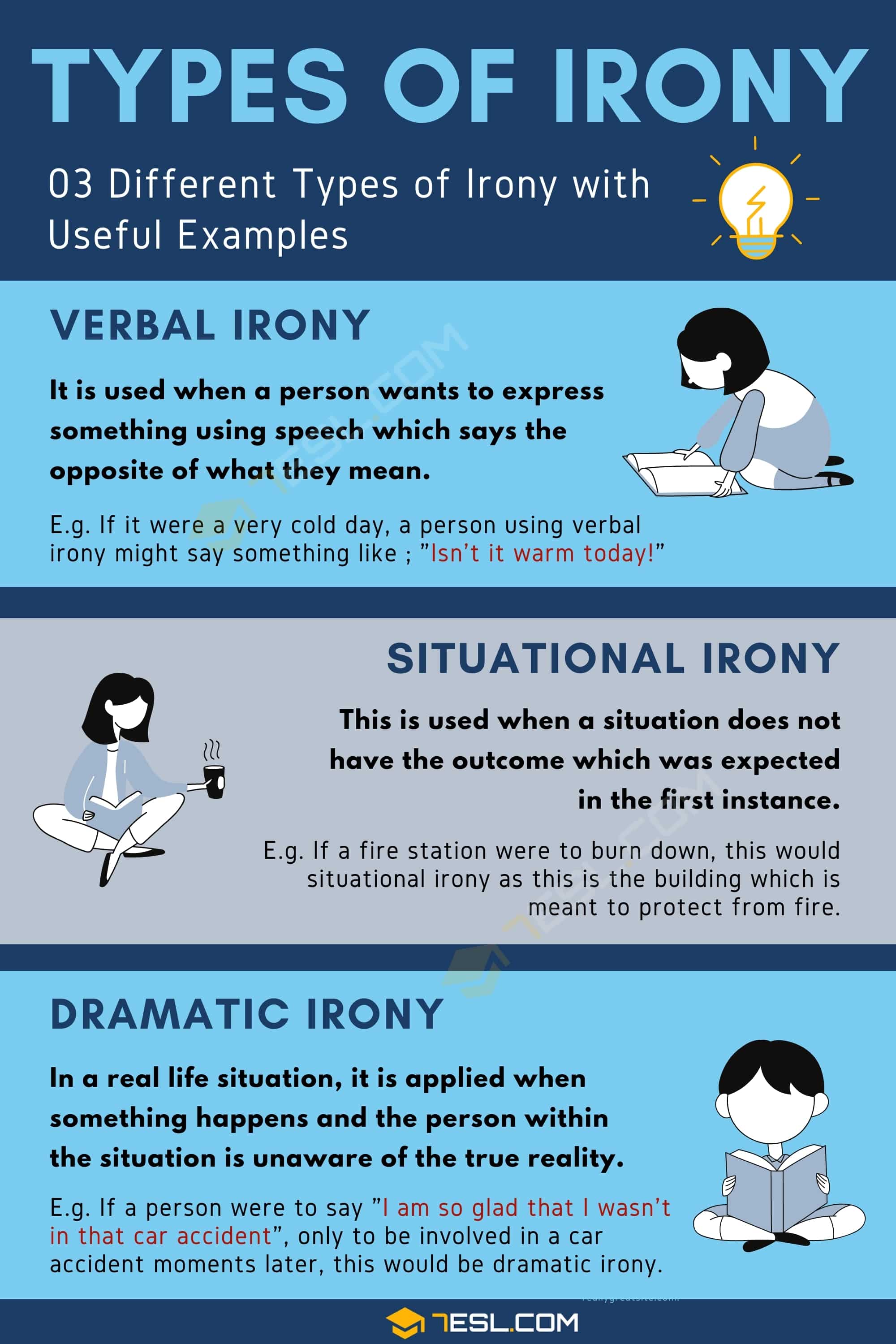 Hi!
I like your info graphic, but there is an error on irony page 2. Instead of situational irony twice, the last should be labelled dramatic irony.

It is not “Irony” to say “Isn’t it warm?” on a cold day, that is sarcasm. It would be ironic to say “The downhill skier worked up a sweat at 10º below zero.” Most of the offered examples of verbal irony are in fact examples of sarcasm. There is a difference between sarcasm and verbal irony, the latter has to have the element of situational irony in it or it is just sarcasm. “Well, this is just the best day ever.” said the bus driver as his bus broke down for the third time that day.– is just sarcasm, not… Read more »