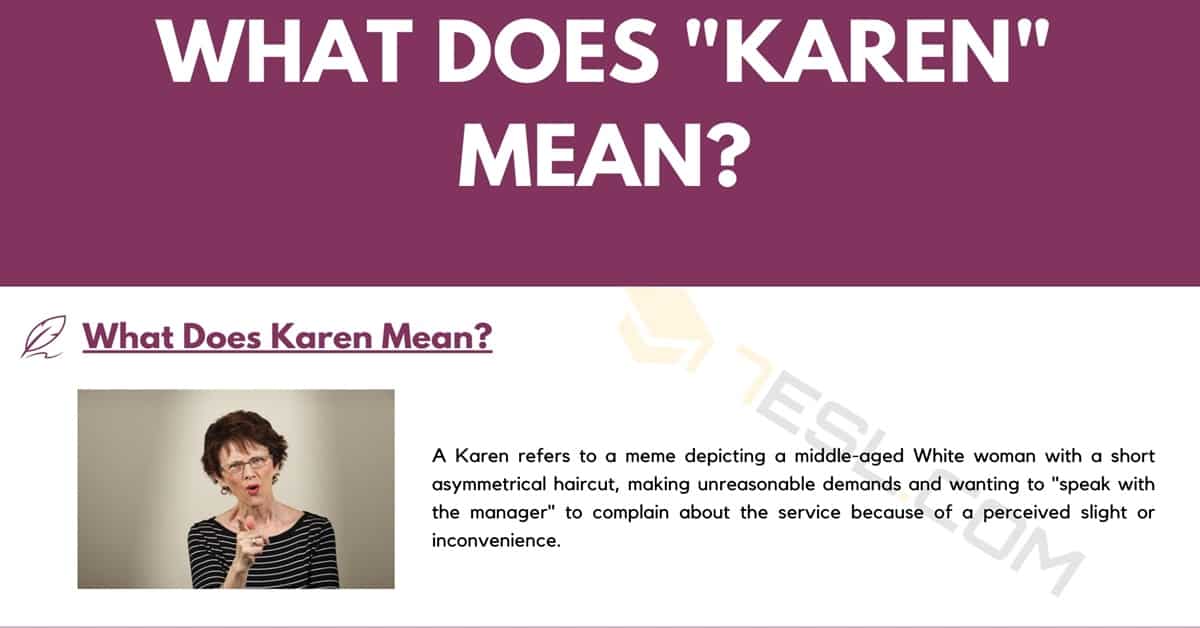 Though to slang term “Karen” has been in pop culture for several years, the term and meme emerged as a term to call out White women engaging in racist acts. In 2020, a year of heightened political, racial tensions, and a health crisis, the term Karen came into the mainstream for an obnoxious, privileged White woman becoming angry over a perceived slight. In this article, we will look at the slang term Karen and consider what it means.

What Is a Karen?

What Does Karen Mean?

The slang term Karen is a slang term for a White middle-class woman acting out from her place of privilege or entitlement to be demanding beyond what is normal. Someone acting as a Karen makes angry demands, often in a racist manner, and attempts to police the actions of others.

What Is a Karen?

A Karen refers to a meme depicting a middle-aged White woman with a short asymmetrical haircut, making unreasonable demands and wanting to “speak with the manager” to complain about the service because of a perceived slight or inconvenience.

Where Does the Slang Term Karen Come From?

The origin of the term is not fully known, though it originally described a privileged White woman and evolved into a term of disapproval.

One theory is that it comes from the 2004 film Mean Girls. In the film, the character Karen Smith is confused by how the character Cady could have come from Africa and be White, saying “So if you’re from Africa, why are you White?” In response, the character Ms. Norbury shouts, “Oh my god Karen, you can’t just ask someone why they’re White.”

Another origin theory says the term comes from Dane Cook’s 2005 “The Friend Nobody Likes” comedy sketch about the gal in the group no one likes is named Karen. Jay Pharaoh also used Karen as a punchline in his 2015 “Can I Be Me?”

Others attribute it to the Reddit user karmacop9 and his rants against his ex-wife named Karen. Yet another origin theory comes from a 2016 Nintendo ad with the character “antisocial Karen.” Some say it’s simply because Karen is a common name for older women.

Whatever the reason for the choice of the woman’s name Karen to portray an angry put-upon white woman, the slang term has been adopted by the Black community to satirize clueless, privileged, unreasonable white women acting out against Black people because of a perceived slight.

What are Other Meanings for Karen?

There are other potential meanings for Karen, including:

Karen has also evolved to be synonymous with the slur bitch and some consider it to be misogynistic.

Who Uses the Term Karen?

When Is It Appropriate to Use the Slang Term Karen?

Some would argue that it is never appropriate to use the slang term, Think of the nice people named Karen.

As the term has become mainstream, its meaning has become confused. The appropriate application of Karen is for a White woman who tries to use her place of privilege to demand her way. The proper meme for a Karen is a middle-aged White woman with a bobbed haircut, demanding to “speak with the manager.”

Examples of the Term Karen

An example of a Karen is the woman who called the police to shut down a child’s lemonade stand because the child didn’t have a permit, or threw a tantrum when required to wear a mask.

Examples of Karen in statements: The classic Karen statement is, “I demand to see the manager.” The counter-statement to call down the Karen is the slang put-down, “Calm down, Karen.”

A conversation example would be:

What Other Words Can Be Used Instead of Karen?

There may not be an alternative to using Karen since it describes a certain kind of person acting in a certain way. If we are honest with ourselves, other ways to refer to a Karen are terms like White privilege, White supremacist, White exceptionalist, privileged, entitled, and racist.

When we take a good look at ourselves to make a better society, perhaps slang terms like Karen will no longer need to be used.