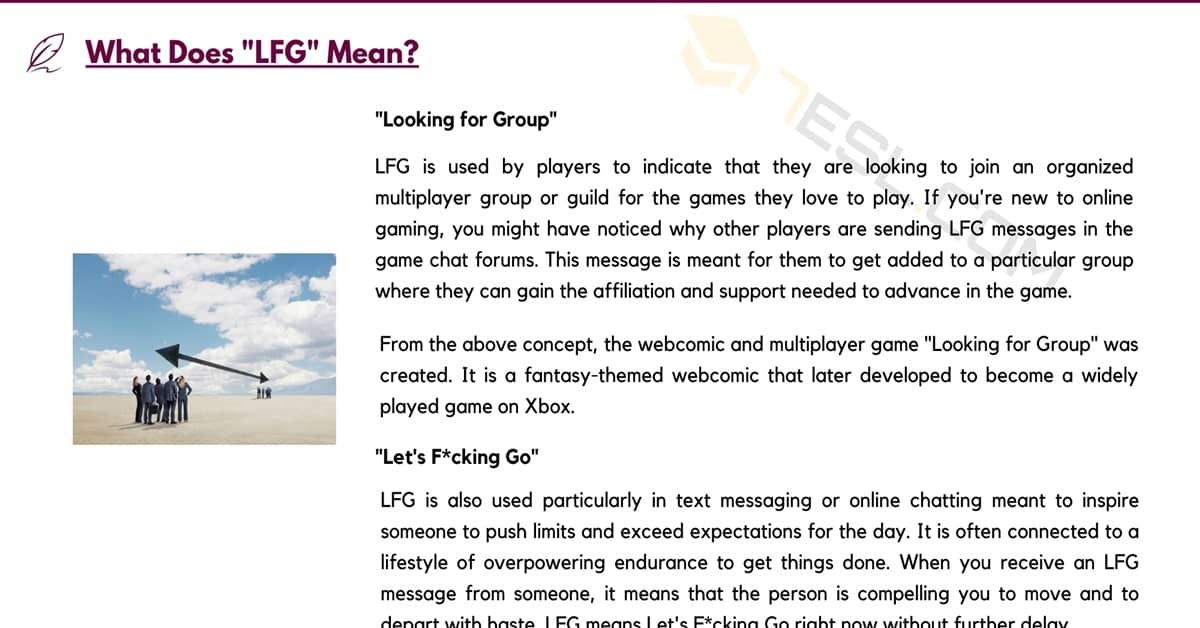 LFG is an initialism type of abbreviation that is also known as alphabetism. It is an initialism particularly common in the online gaming world but it can also be used in ordinary conversations in a different context.

What Does LFG Mean?

LFG is used by players to indicate that they are looking to join an organized multiplayer group or guild for the games they love to play. If you’re new to online gaming, you might have noticed why other players are sending LFG messages in the game chat forums. This message is meant for them to get added to a particular group where they can gain the affiliation and support needed to advance in the game.

From the above concept, the webcomic and multiplayer game “Looking for Group” was created. It is a fantasy-themed webcomic that later developed to become a widely played game on Xbox.

LFG is also used particularly in text messaging or online chatting meant to inspire someone to push limits and exceed expectations for the day. It is often connected to a lifestyle of overpowering endurance to get things done. When you receive an LFG message from someone, it means that the person is compelling you to move and to depart with haste. LFG means Let’s F*cking Go right now without further delay.

Online gaming has consistently been on the rise and ever-evolving. As social and mobile gaming, as well as free-to-play and pay-to-play gained massive followings, groups and guilds have grown in multitude. The establishment of these groups has caused gamers to take advantage of the opportunity for affiliation. From this need arise the now widely used phrase “Looking for Group” to get the attention of leaders or group managers to include them in the league.

It is unclear when LFG first came to be used to intensify an urge to move or go. All the same, the phrase has become less vulgar and more publicly acceptable. It has now become an effective way to make someone move with excessive speed or urgency so that everyone can go on and start the day.

Although online games are played by people of all gender and age, it is evident that younger generations are the ones using LFG the most. Thus, the initialism LFG is commonly used by teenage gamers.

In this context, LFG is commonly used by mature adults who lead a busy lifestyle. LFG is particularly common to those who value their time and consider busyness as a trendy status symbol.

When to Use LFG?

LFG is used when a player seeks to join an established group for affiliation and support.

It is used to compel someone to move faster in order to go somewhere or achieve a common goal.