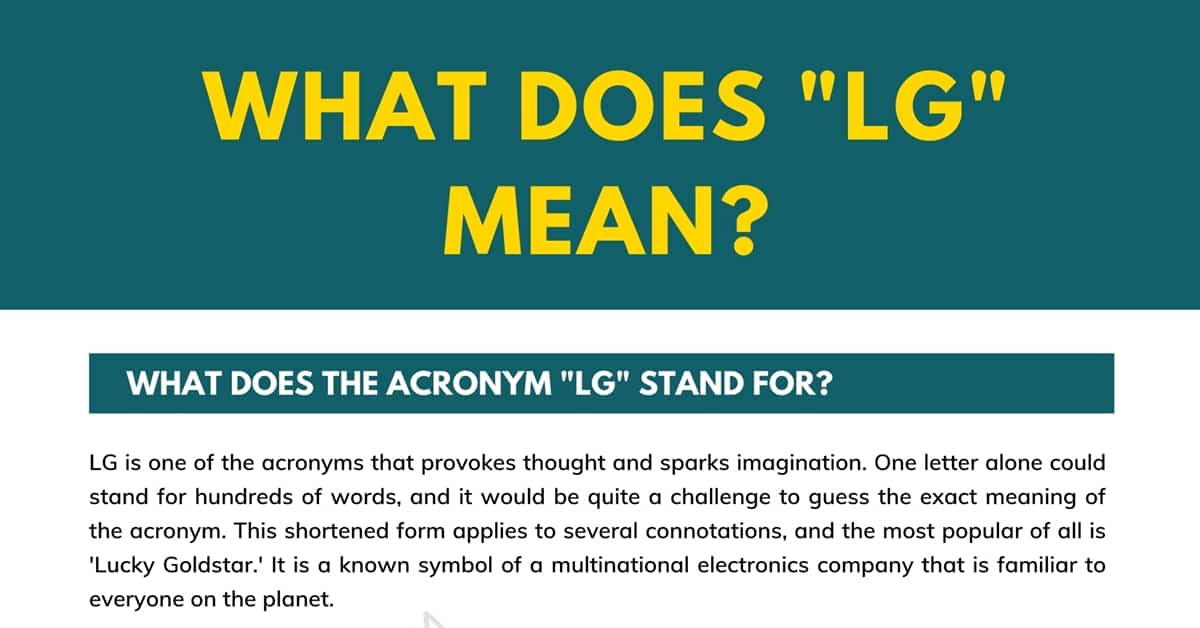 What does the acronym “LG” stand for? In this article, we will shed some light on the “LG”. We will not only help you understand what it actually is but also how it functions.

The abbreviation is a shortened form of a word or phrase used in informal writing. An acronym is a type of abbreviation formed using the initial letters of a longer name or phrase. The usage of these shortened forms of words is mainly for convenience both in oral and written language. To know what acronyms stand is more than just for trivial purposes. It helps you in taking advantage of the convenience the shortened forms offer. Also, it allows you to communicate faster and understand the world better.

What Does “LG” Stand For?

LG is one of the acronyms that provokes thought and sparks imagination. One letter alone could stand for hundreds of words, and it would be quite a challenge to guess the exact meaning of the acronym. This shortened form applies to several connotations, and the most popular of all is ‘Lucky Goldstar.’ It is a known symbol of a multinational electronics company that is familiar to everyone on the planet.

The acronym also stands for ‘Little Girl.’ LG refers to a young girl who has the habitual gesture of a stereotypical teenager. A girl between the ages of 10 and 14 years old portraying a fancy image to attract popularity. Well-manicured hands, flawless makeup, expensive shoes, and bags are the visible characteristics of an LG.

Origin of the Acronym “LG”

The company LG Electronics uses the tagline ‘Life’s Good.’ People confuse this tagline as the real name of the company. However, it is only a catchphrase that they use in advertising. The acronym LG still stands for ‘Lucky Goldstar.’ LG Electronics is a company formed by the merger of two different companies, Lucky and GoldStar. From this merger, a multinational conglomerate corporation was established.

LG is also an acronym commonly used in parts of Asia and Australia. This time, it has nothing to do with electronics but with a fancy girl. Abbreviating the words Little Girl helps deliver a more precise connotation of the subject. LG has become more of a slang that does not necessarily have a literal meaning.

The lower ground is an extra floor below the main floor. Commonly, the LG button is in place on elevators in buildings that have lower-ground.

It is a company that offers warehouse management solutions and similar services. You may have probably seen their logo while on the road, especially on highways.

The term is used for any merchandise that is of poor or inferior quality.

It is an acronym for the professional geologists who passed all the licensure requirements. The symbol is common in organizations, NGOs, and universities.

Other Words to Use Instead of “LG”

Aside from LG Electronics, the abbreviation “LGE” is also in use, especially in written language. In oral language, the acronym “LG” is still preferred over “LGE”.

What Does LG Stand for? | Infographic