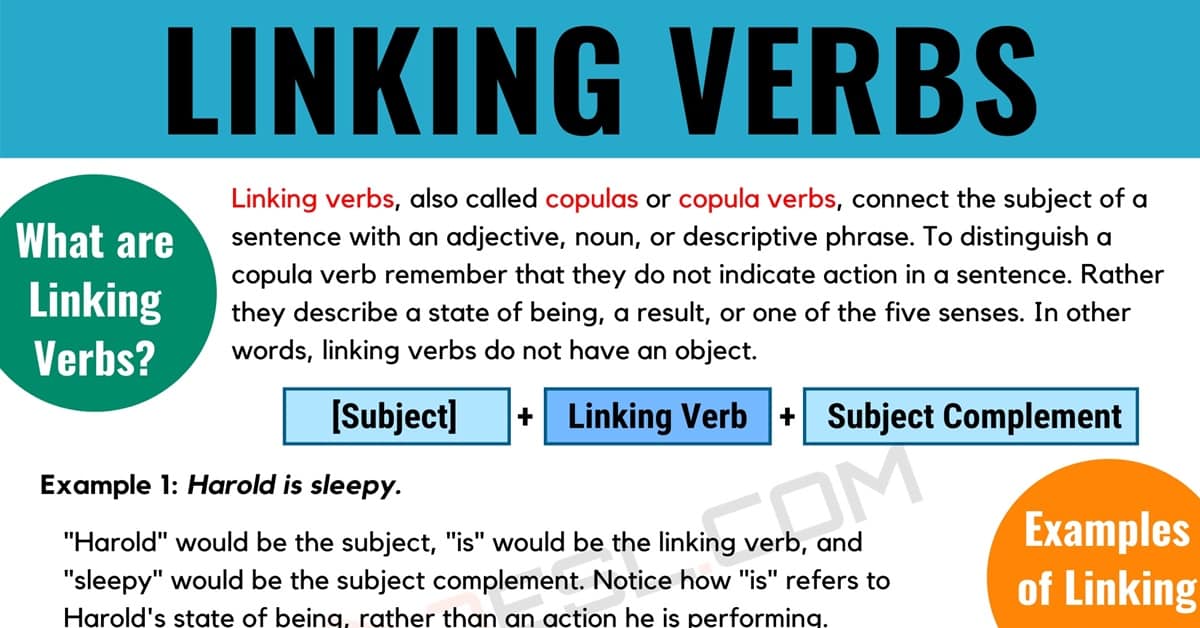 We use many parts of speech in language to express our ideas. In English, verbs are used to express actions. Even though verbs have one job, they can perform it in a variety of ways. For example:

Here “Mary’ is the subject of the sentence, “picked” is the verb, and “a bouquet of flowers” is the object. This type of verb is known as an action verb. Action verbs are popular in writing because they sound direct. Alternatively, we can use a different form of the verb like this:

“Mary” is still the subject, but “is picking” sounds more like a state of being than just the action itself. “A bouquet of flowers” is still our object. This is a gerund, presenting Mary as currently doing the action now. We can also use verbs to associate the subject of a sentence to a specific identity. When used this way, they are called linking verbs.

What Is A Linking Verb?

Linking verbs, also called copulas or copula verbs, connect the subject of a sentence with an adjective, noun, or descriptive phrase. To distinguish a copula verb remember that they do not indicate action in a sentence. Rather they describe a state of being, a result, or one of the five senses. In other words, linking verbs do not have an object.

In grammar we understand that the object is whatever is receiving the action of the subject. Since linking verbs do not suggest action, there is no receiver. Instead, what follows a linking verb is known as the subject complement.

The subject complement is the descriptive word or phrase that the linking verb connects to the subject of the sentence. It can be a noun, adjective, or phrase. Generally, the structure of a sentence with a linking verb will be:

Let’s take a look at a quick example:

Starting to get it? How about this next one:

“Ice” is the subject here, “feels” becomes our copula verb, and the phrase “cold to the touch” would be our subject complement. Working with linking verbs really is that painless.

These are a few common linking verbs found in English:

Some of these verbs can be used as action verbs. It’s important to be able to distinguish between action verbs and linking verbs so you can understand what the author is trying to convey.

Remember that linking verbs are themselves not action words. Compare the usage of “appeared” in both the sentences below:

In both A and B, “Daisy” is our subject.

Look at how “appeared” is being used in sentence A. It’s describing an action that Daisy has accomplished. “Onstage” is where Daisy appeared, and the prepositional phrase afterwards adds some more detail of the scene.

However, “appeared” in sentence B is describing Daisy’s current state of being, how she is perceived by others. The subject complement, “troubled” describes more about how Daisy appears.

A simple way to identify a linking verb is to replace the verb in question with “seems.” If the idea makes sense, then the verb is a copula; if not, then the verb is something else. Let’s try this technique with the above sentences:

Although sentence A makes sense grammatically when we use “seems,” this verb is not a linking verb because “onstage” is not modifying Daisy’s identity. Instead “onstage” is a location and Daisy took action, or “appeared”, to get there, which is the proper idea of sentence A. With sentence B, the original idea of the sentence is kept intact. “Seems” links Daisy’s state of being to “troubled.”.

This is an easy way to identify what you should be looking for after the verb. For more complex sentences, you can replace the verb with any of the linking verbs from the list above and read to see if it clarifies its status.

Now’s the time to practice what you have learned so far. See if you can identify which words in the following sentences are the subject, the linking verb, and what the subject complement is. Check the end of the article for the answers.

Practice with finding out whether the verb is a linking verb first, then find the subject complement. If you can do this, you’ll feel more confident in reading and writing in one of the hardest languages to learn. 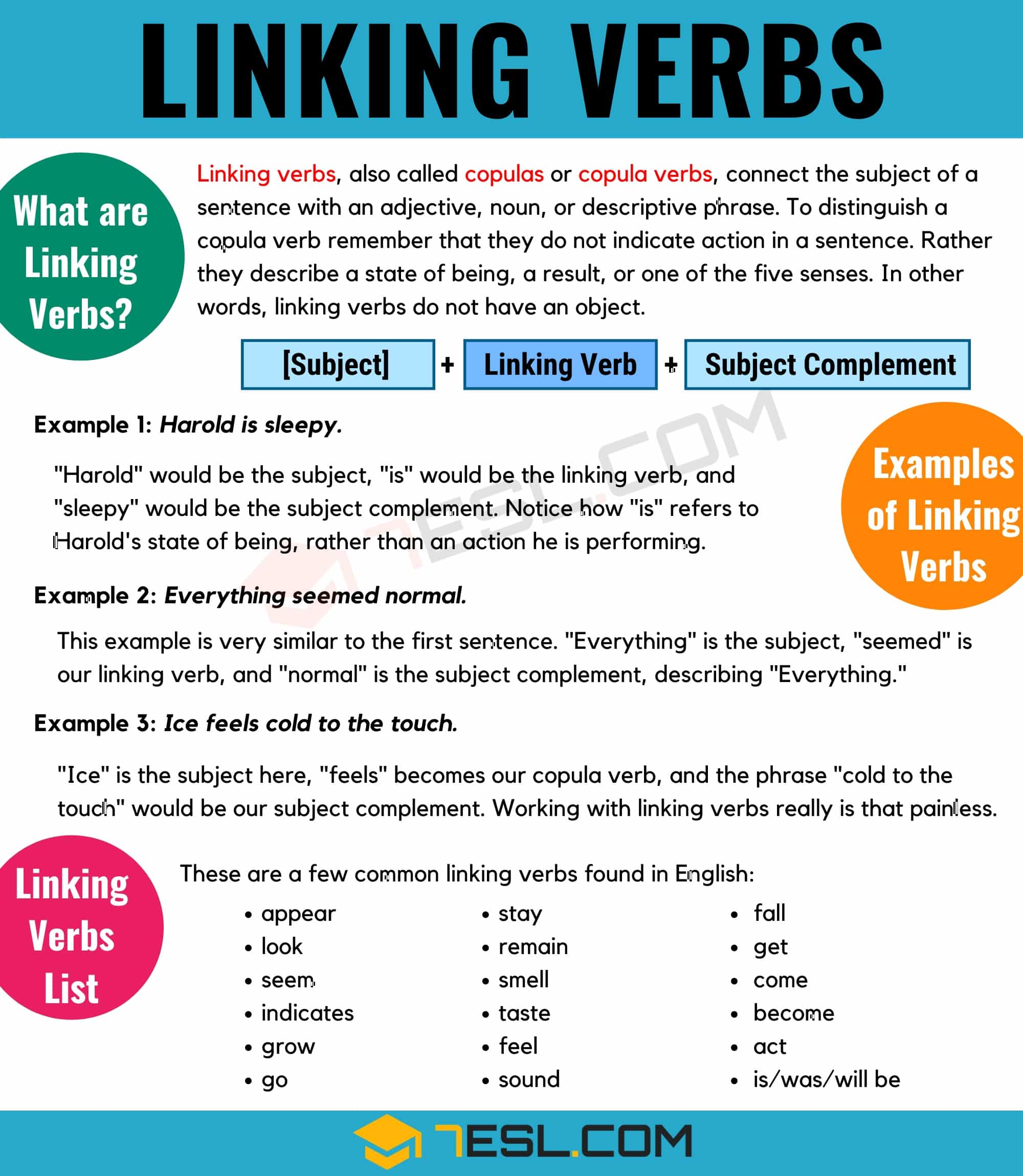 7 esl is really a perfect platform for the learners of the English language.

Great resource on linking verbs! I have trouble convincing even college-educated native English speakers to not use an adverb to modify a linking verb/copula.

Mary is picking a bouquet of flowers.

Unlike how it’s explained, ‘picking’ is not a gerund; a gerund is defined as a verb which functions as a noun. Rather, ‘picking’ is a present participle.

7 ESL is really helpful to the teachers and the students. Thank you so much.