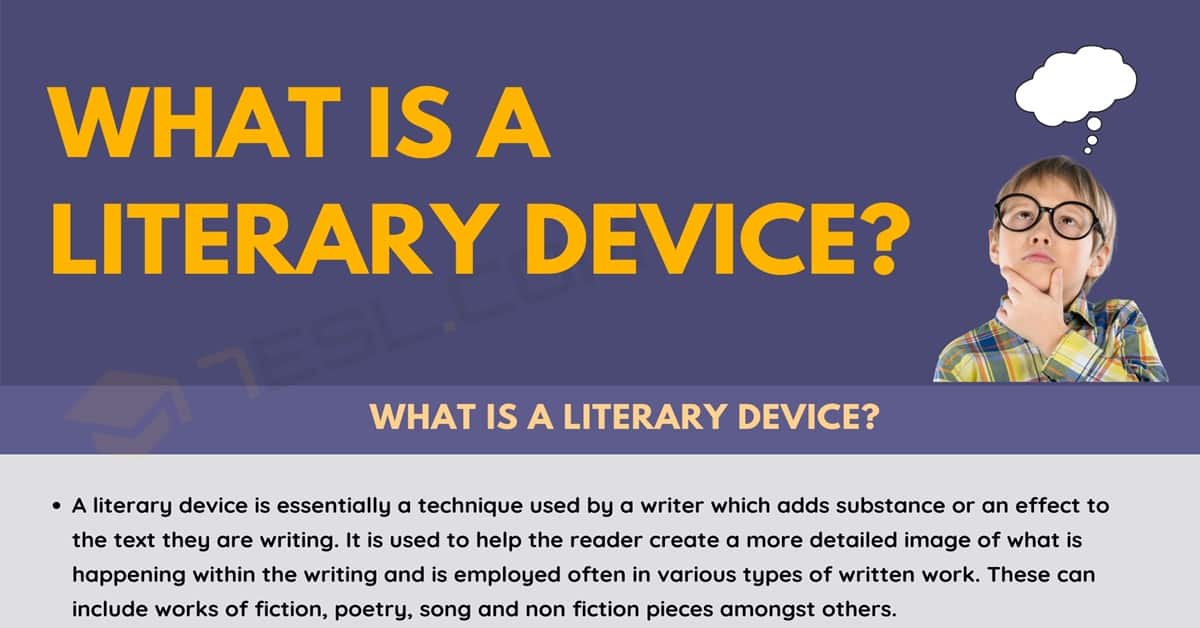 What Is A Literary Device?

A literary device is essentially a technique used by a writer which adds substance or an effect to the text they are writing. It is used to help the reader create a more detailed image of what is happening within the writing and is employed often in various types of written work. These can include works of fiction, poetry, song and non fiction pieces amongst others.

There are many different types of literary devices, some are used more often than others but each one has its own effect on the writing and is used in a specific way.

Why Do Writers Use Literary Devices?

As we mentioned previously, a literary device is used to paint a picture for the reader. They can add an effect such as sarcasm, rhythm or detail to a piece of writing as well as creating many other effects which further pull the reader in.

They are a great way to assist the reader in gaining a deeper understanding of what is being said in the writing and are also used as a way to emphasise a point or to make it more clear. Many literary devices are put in place in order to convey certain information, especially if the writer wishes to do so in a more creative fashion, therefore making the text much more appealing and interesting to the reader.

Literary devices are an excellent way for writers to make their readers connect with the character within a story on a much more profound level and they can create a deeper meaning to these characters and their situations.

What Are The Most Common Literary Devices Used In Writing?

When thinking about literary devices in the English language, you are confronted with a lot of them, all offering different ways to influence the text. However, there are some that are used more often than others, and in this section, we will be looking at some of the most commonly used literary devices, what they are used for and how we can apply them in writing.

One of the literary devices that you will see very frequently in writing is alliteration. This literary device is used to add rhythm by the use of repeated sounds at the beginning of adjacent words or words which are very close to one another in a sentence. Let’st take a look at some examples of how alliteration works.

Similar to the simile, a metaphor is used to make a comparison but rather than making a direct comparison, it does so indirectly. The metaphor makes a non literal comparison between two things which are not directly related. There are many examples of this literary device used throughout various texts, so let’s take a look at how it works.

This type of literary device is used to talk about something that may be construed as offensive and so the writer will use a variant on the wording in order to make what is being referred to, more palatable. Euphemism is another one of the literary devices which is closely associated with Shakespeare but is also used by many other writers. Let’s take a look at some examples of this.

Anaphora is a form of literary device in which the writer uses a repeated phrase at the beginning of consecutive sentences. The reason for doing this is to make a stronger point by using the repetition to almost drill the point into the readers mind. This form of literary device is often used in the writing of speeches, especially those designed to motivate or convince the audience. We are now going to look at some examples of how anaphora is used.

This is a very commonly used literary device which you are likely to come across in many texts when reading. Hyperbole is the used of a statement which is not meant to be seen as literal by the reader. It is used to emphasise something and to exaggerate something in order to stress the importance. Here are some examples of sentences which feature the use of hyperbole.

Irony comes in various forms and is often used in literature to express a meaning opposite to the one which is being construed. The three types of irony are verbal irony in which someone says something but in reality, means the opposite, situational irony in which an event occurs which was the complete opposite of what was expected to happen and dramatic irony where the reader is aware of a situation that the character is not and therefore see the characters behaviour in a different light. Let’s take a look at an example of each of these.

Out of all the literary devices, this is one which you will see a lot more than you first realise. Onomatopoeia is a literary device which uses words to describe a sound, and these words actually sound like what they are describing. There are many examples of this literary device being used in written works, let’s take a look at some of the things you might see.

An oxymoron is a literary device which uses two words to make a phrase which comes across as contradictory. This type of literary device is usually used for a humorous effect but also in order to put an emphasis on what is being said, by grabbing the readers attention with the contradiction. Here are some examples of how oxymoron can be used.

Synecdoche is a literary device which uses a part of something to refer to the whole. It is used to give a more descriptive picture of what is going on. Let’s look at some examples of synecdoche being used. 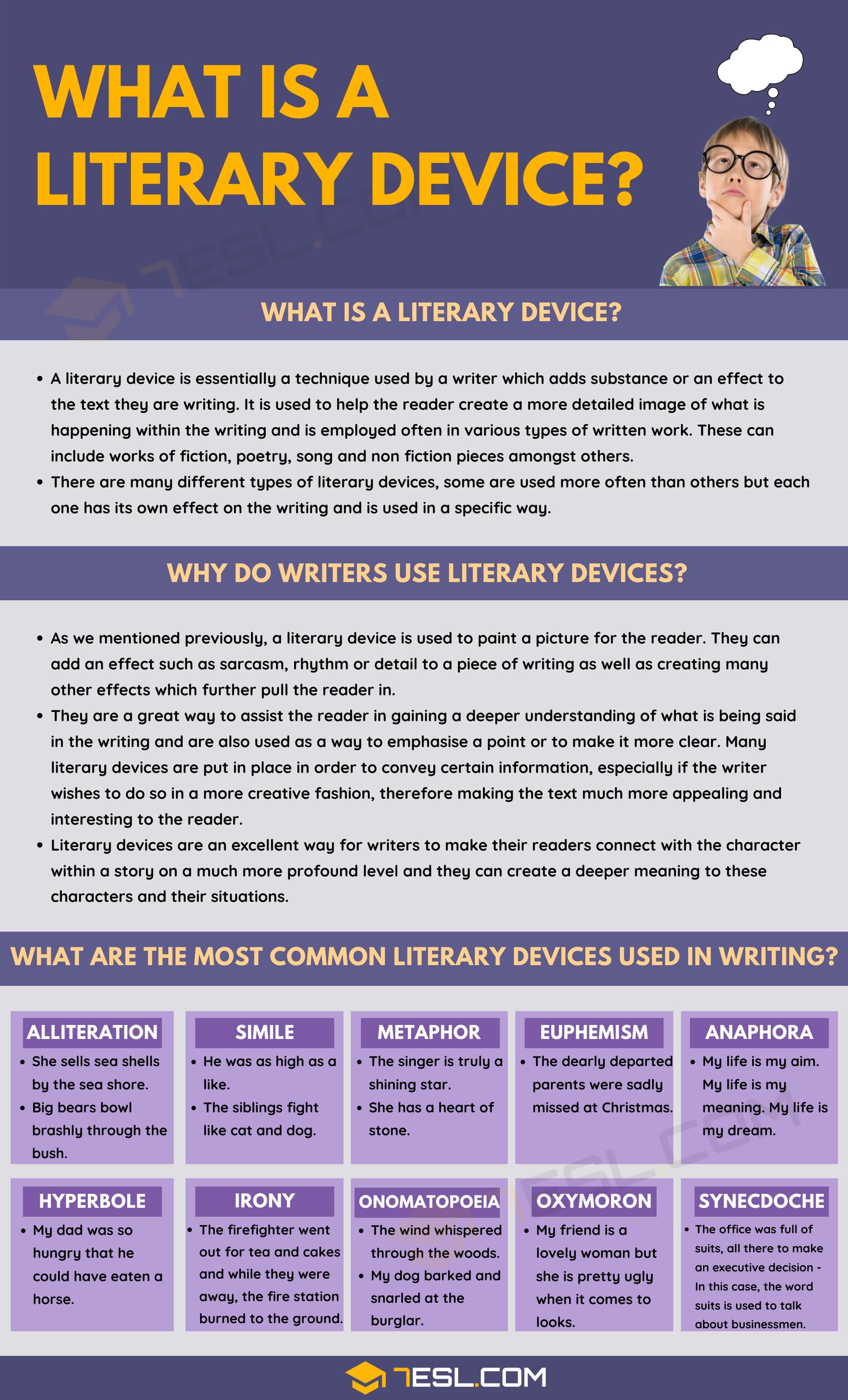 Cool! I used this for school! It worked!