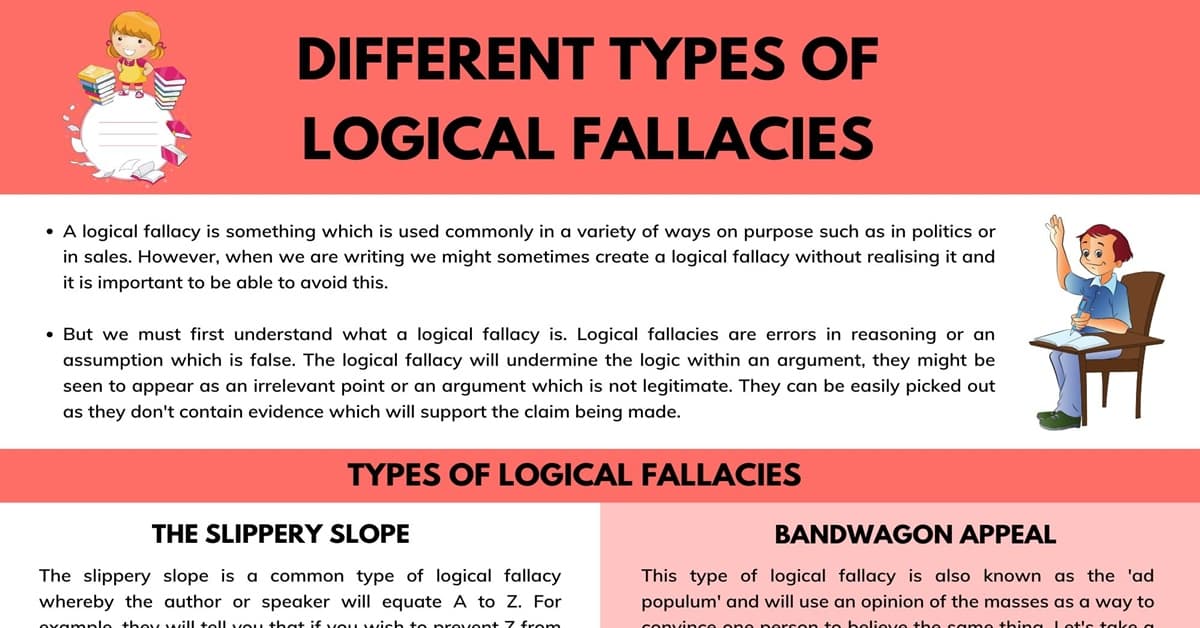 What Is A Logical Fallacy?

A logical fallacy is something which is used commonly in a variety of ways on purpose such as in politics or in sales. However, when we are writing we might sometimes create a logical fallacy without realising it and it is important to be able to avoid this.

But we must first understand what a logical fallacy is. Logical fallacies are errors in reasoning or an assumption which is false. The logical fallacy will undermine the logic within an argument, they might be seen to appear as an irrelevant point or an argument which is not legitimate. They can be easily picked out as they don’t contain evidence which will support the claim being made.

The slippery slope is a common type of logical fallacy whereby the author or speaker will equate A to Z. For example, they will tell you that if you wish to prevent Z from happening then A must never occur, despite these two things being completely unrelated in most cases. The writer assumes that if situation A were to occur, then B and C and D and so on would naturally follow. Let’s take a look at an example of this.

If we are to ban air travel because of its negative effect on the environment then eventually the authorities would ban every type of motorised travel. Therefore we should not ban air travel.

You can see that the argument is not at all logical and just because one extreme thing is occurring in the argument, it cannot be automatically presumed that this will create a snowball effect.

In this type of logical fallacy – hasty generalization, the writer or speaker will jump to a conclusion before they understand all the facts which are relevant to it. In the following example, we see that the writer is making an evaluation of his new job based on the first morning spent there which is not a clear indication of the truth of the situation.

Despite it being only noon on the morning of my first day at my new job, I can sense that this is going to be too much hard work.

In this form of logical fallacy the speaker or writer will assume that A is a result of B owing to the fact that A took place after B. An example of this might look as follows:

I ate lunch at that new cafe and this evening I am ill, that cafe must not be clean.

The assumption that eating at the cafe was a cause of illness is not logical since there could be a huge variety of reasons that the writer is sick. Just because one event happened after another, it does not mean there is an automatic connection between the two.

Someone using genetic fallacy will assume that the background of an idea, person, place, etc determines its nature or worth. An example of this might be as follows:

All German people are bad because the leader of that country started the second world war.

One cannot link the entire population of Germany with being bad simply because of one persons behaviour in history.

Begging the question – This is a form of logical fallacy where the claim that is being made is backed up within itself. Let’s take a look at an example of this.

Dirty and bacteria ridden water should not be ingested.

The circular argument does not prove the argument but rather restates its. This is done by using two claims which mean the same thing but by not giving any specific evidence to back this up. Here is an example of what this might sound like.

Van Gogh was an excellent artist because he painted well.

Both of the claims in this sentence mean the same thing but neither give us any real evidence to back them up. Both of them require further data to be proven to be correct.

This type of logical fallacy brings the argument down to one of two choices making it overly simple. A good example of this might be as follows.

We either have the choice of stopping the use of motor vehicles or ruining the planet.

This sentence tells us that there are only two options however there is no mention to the wealth of other choices that could be considered such as reducing the use of motor vehicles or using cleaner versions of these.

A form of logical fallacy which is used to attack someone’s character instead of their argument or opinion. Let’s take a look at an example of this.

The strategies of Greenpeace are not effective since they are just a bunch of lazy, unclean tree huggers.

The writer here does not describe which strategies he is referring to nor does he try to look at the positive points, rather he simply makes a personal attack on the character of those within the group.

This type of logical fallacy is also known as the ‘ad populum’ and will use an opinion of the masses as a way to convince one person to believe the same thing. Let’s take a look at an example of this.

If you were a true Brit, you would back the views of the Queen.

The writer here makes the reader feel as though they want to be ‘a true Brit’ however being a true Brit does not necessarily mean that one should have the same views as the monarch, as the author of this sentence would suggest. There is no logical connection between the two ideas.

This type of logical fallacy, red herring, is used in order to evade the issue at heart, it is used as a way of steering clear of the opposing argument instead of addressing it. An example of this might be as follows.

The rising levels of mercury within sea food is not safe, but what are fishermen going to do to provide for their loved ones?

The writer of this sentence does not tackle the issue at the heart of the problem but rather turns his attention to another point.

The straw man is used as a way of making the opponent’s view overly simple and then attacking the argument which now appears hollow. Let’s look at an example of this.

Those who do not support the minimum wage rise which has been proposed clearly dislike the poor.

The writer is implying that the opposition has a view which is not necessarily true and creating an emotional response within the audience. Just because the opposition does not agree with the wage rise, this has no bearing on his feelings towards a certain group of people.

Reductio ad absurdum shows an opposite of the claim that has being made and how it would draw nothing but an absurd conclusion, therefore, disproving the theory.

I am taking my driver’s test tomorrow, so please do pray for me. If a lot of people pray about this then God will allow me to pass the test with ease.

The false equivalence fallacy is one which shows up regularly in day to day conversation as well as in written pieces such as newspaper articles and other media.

Learn more about the definition and examples of the false equivalence fallacy here.

The final type of logical fallacy that we will look at is one where the writer or speaker will compare a minor misdeed against something much more major. This gives the impression that both are as bad as one another. Let’s take a look at an example of this.

The person who took my seat on the bus is as bad as Satan.

The author is making a comparison between a very mild thing and something completely evil, making such a comparison is neither fair nor accurate.

I have made a logical fallacy or error ; I am not sure how to categorise it. If you can help, it will be great! in my undergraduate thesis, there are four different enzymes binding same substrate with good binding affinities and involved in chemical reactions. I was trying to find out compounds that would be competitive inhibitors based on scientific literature. I reasoned out that if the family of compounds of competitive inhibitors, which were phyto-chemicals can bind in one enzyme binding site, it has potential to bind in other enzymes as well. But I realised my reasoning is… Read more »