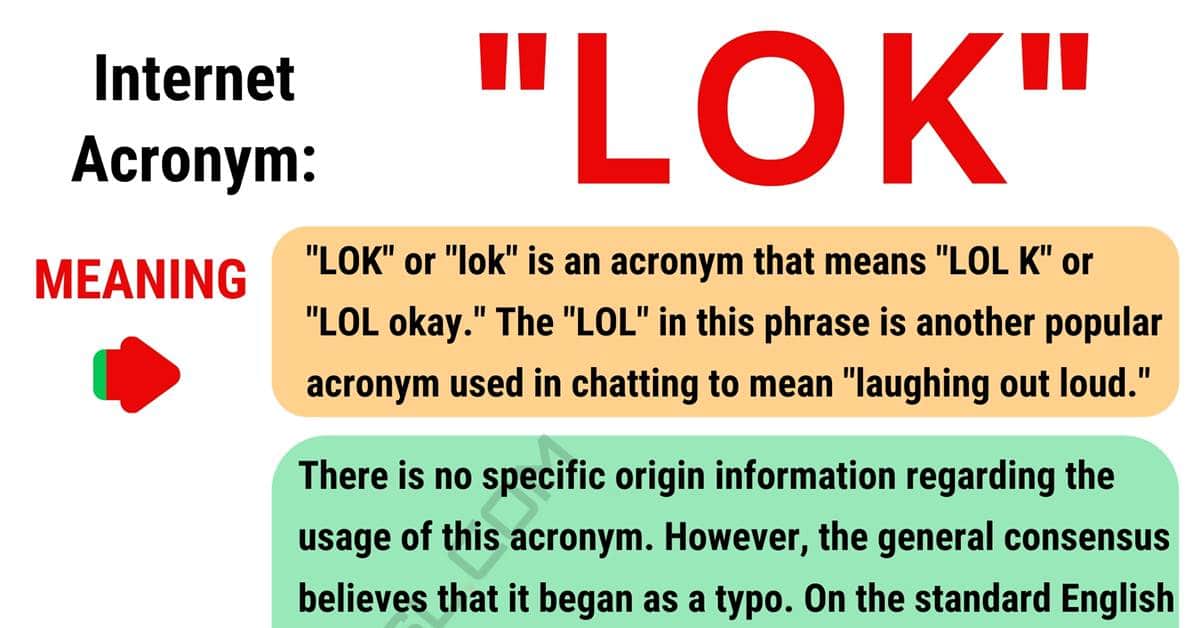 Internet and text chatting today relies a great deal on using acronyms in messages to hold a conversation. One of those acronyms used today is “lok” or “LOK.” In this article. you will find a one-stop place to find all the information you need regarding the usage of this acronym. You will find the meaning, information on its origin, and other meanings of the term. You will also see “lok” used properly in conversation so you will know how to use it in the future and see some suggestions regarding other ways you can say this while conveying the same meaning.

What Does LOK Mean?

“LOK” or “lok” is an acronym that means “LOL K” or “LOL okay.” The “LOL” in this phrase is another popular acronym used in chatting to mean “laughing out loud.”

There is no specific origin information regarding the usage of this acronym. However, the general consensus believes that it began as a typo. On the standard English QWERTY keyboard, the letters “L” and “K” are located next to one another. It is thought that perhaps someone mistyped the common acronym “LOL” and typed “LOK” instead. and when asked for the explanation the meaning above was stated. Since then it is hypothesized that the acronym itself became used in one location and spread over time to other geographical locations on the internet and through text.

Although most other meanings of this acronym are affiliated with company names and to reference the names of certain gaming titles, there are some other phrases that the acronym “lok” can relate to. Two of the other phrases that “lok” can be short for are “lots of kisses” and “level of knowledge.” You will need to look at the context the term is being used in to correctly decipher if the acronym is being used in its most common way or in one of these two alternative meanings.

There are several alternative ways to say the acronym “lok” and convey the same meaning. Some of these alternatives include:

Meh…..
I read so many dumb and uninformed comments (and sometimes whole threads) that I’m beginning to suspect that “LOK” should stand for “Lack Of Knowledge”.
😉