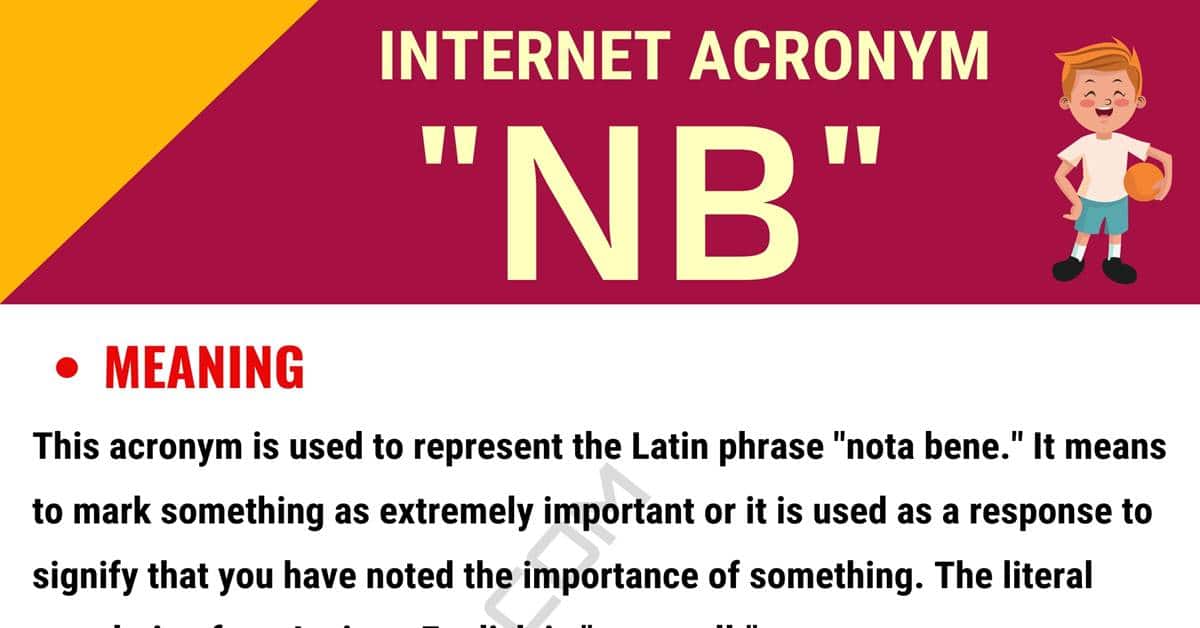 The acronym “NB” is not used as much anymore as it used to be in the history of literature. Chances are if you have signed any kind of legal documents lately or agreed to any License Agreements on the internet, this is most likely where you encountered the acronym. If you were left wondering what the meaning of this acronym could be, then you have arrived at the right page. Below, you will not only find the meaning of this acronym, but you will also learn about its origin and see some other phrases that this acronym could represent. You will also see some example conversations aimed at highlighting the proper usage of this acronym to help you better understand how it is used. Lastly, you will discover some synonyms for the phrase this acronym represents.

What Does NB Mean?

This acronym is used to represent the Latin phrase “nota bene.” It means to mark something as extremely important or it is used as a response to signify that you have noted the importance of something. The literal translation from Latin to English is “note well.”

The acronym comes from the term itself and the term “nota bene” has been derived from two older Latin words. The first is the word “notre” meaning “to note”. The second is the word “bene” meaning “well.” The phrase is used widely in written works throughout the history of literature and is especially used in legal documents. Areas of importance are highlighted with this acronym to draw attention to it and to make sure people read what is contained there. You may see the term appear on the internet in License Agreements and other legal information. You may also see it used by people when they want to draw your attention to something important as a sidenote or addition to their original posts.

There are many other meanings of this acronym suggested, so many that it would be nearly impossible to mention all of them here and some are simply made up for the amusement of others. However, some of the phrases that this acronym can also represent are “not bad,” “non-binary,” “nose breather,” “not bothered,” and “nervous breakdown.”

Other Ways to Say “NB”

There are a few other phrases that you could use to represent the phrase that this acronym is used for. Some of the other ways you could say “note well” include: