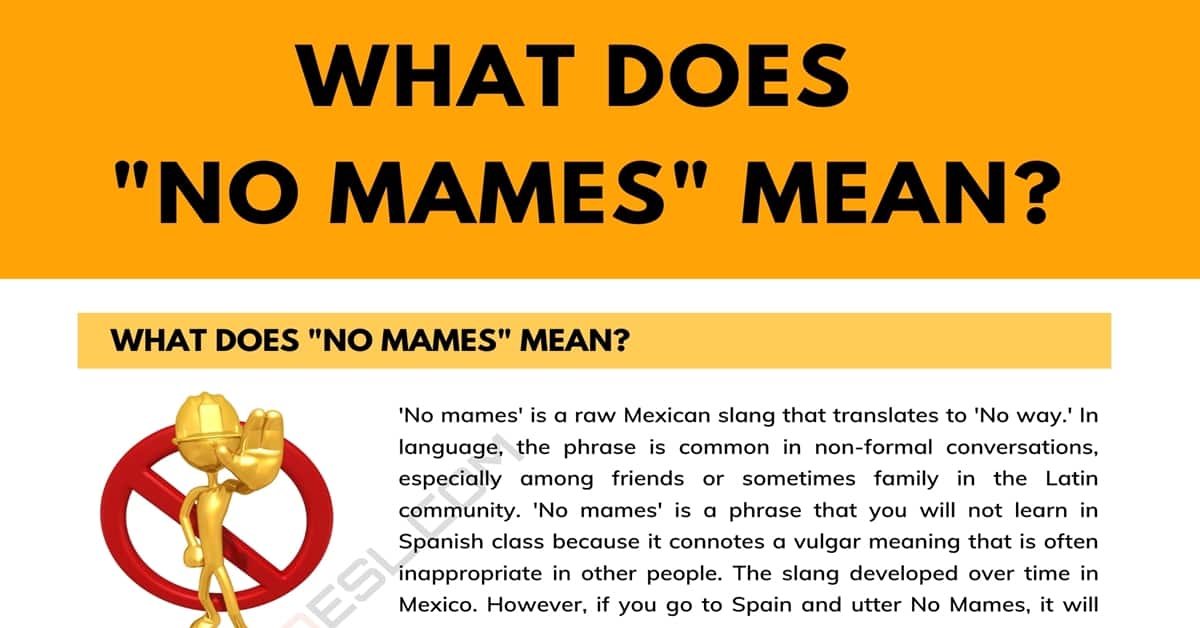 What does “no Mames” mean? We all know that idioms are not to be taken word for word. Deciphering its meaning can be difficult enough for native speakers. Let alone if you’re not a native speaker or if the idiom is in a different language. If you hear a specific idiom too often, then understanding what it means would be just the right thing to do.

What Does “No Mames” Mean?

‘No mames’ is a raw Mexican slang that translates to ‘No way.’ In language, the phrase is common in non-formal conversations, especially among friends or sometimes family in the Latin community. ‘No mames’ is a phrase that you will not learn in Spanish class because it connotes a vulgar meaning that is often inappropriate in other people. The slang developed over time in Mexico. However, if you go to Spain and utter No Mames, it will come out meaningless. Spanish as it may be, not everyone who speaks Spanish can understand the meaning of this term.

Origin of “No Mames”

The word ‘mames’ has its root from the Mexican verb ‘mamar’ that means ‘to suck.’ It can also have implications with a male human body part. For this reason, ‘no names’ should be uttered carefully because some people can take it as vulgar or rude. The usage of this slang can be traced back to Mexico as early as the 1990s. From there, it has spread in the Spanish-speaking communities across Latin American countries and into U.S. soil. It is inevitable for Mexican slang to reach the U.S. since these two countries share a border. As Mexicans cross the border to either spend a vacation, work or settle, they carry these colloquial terms with them. In August 2013, the slang rose to fame as the actor Diego Luna taught the slang to Conan O’Brien on his show of the same name.

Other Meanings of “No mames”

The slang ‘no mames’ has several other meanings and can be used in different contexts. ‘Don’t suck’ or ‘don’t suck it’ is another meaning of ‘no names.’ It becomes a stronger phrase in this context that can be effective in defending yourself from certain situations. But then again, it can be an offensive phrase that could cause any misunderstanding to aggravate. The other meanings of the slang are ‘stop messing with me,’ and ‘you’re kidding me.’

Who Uses the Slang ‘No Mames’

The slang is common in the Latin community, most especially among youths. It is also associated and refers to gang terminology. Gangs develop their language sometimes through adaptation. The unexplicit expression has penetrated the gang language and is also common among Mexican-American youths.

When to Use the Slang ‘No Mames’

The slang term can be used when you’re excited, angry, or when in disbelief. Like, when you got a surprise, you can say ‘no mames,’ and that would be appropriate in that context. If you received shocking news, or if you need to express your anger, ‘no names’ would be the phrase that you can use to relay your emotion.

Examples of “No mames”

“They thought that I would climb that mountain with them. No mames!”

Other words to use instead of ‘No Mames’

Chingar is a Spanish slang word that can be substituted with ‘no mames.’ In English, it means ‘don’t mess around with me’ or ‘don’t fuck with me.’ Just like ‘no mames,’ Chingar is also a strong and vulgar word.