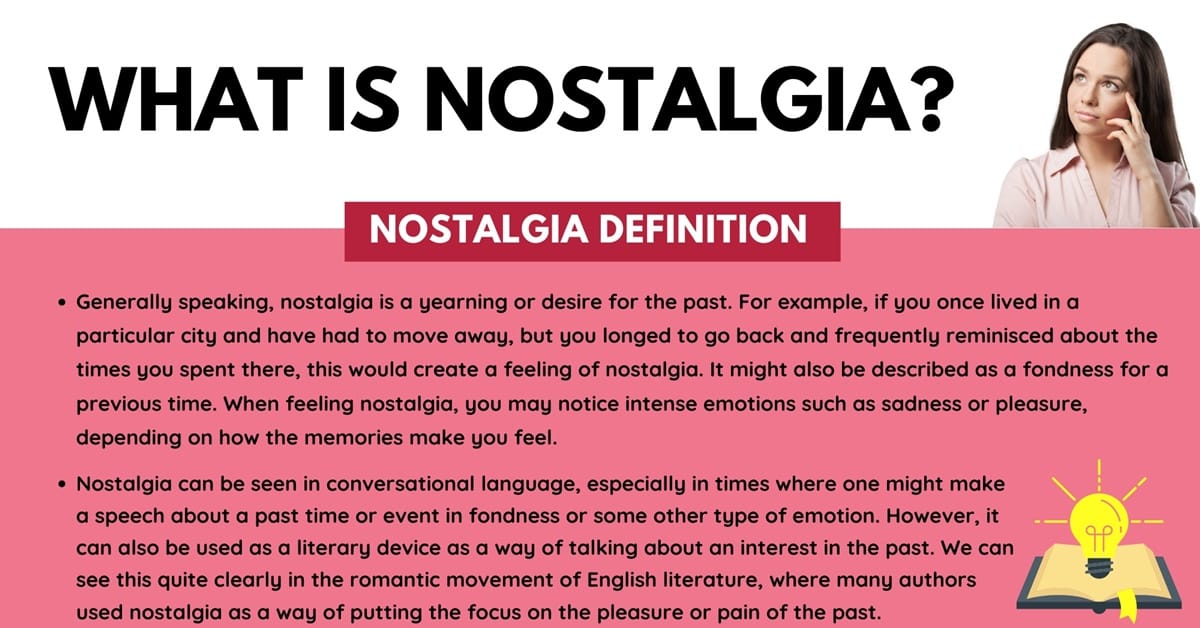 You may have come across the concept of nostalgia when studying the English language, but what does it mean? In this article, we are going to explore not only what nostalgia is but how it can be used in both spoken conversation and as a literary device. We are also going to be taking a look at some examples of nostalgia being used as a way to gain a greater understanding of its function.

Generally speaking, nostalgia is a yearning or desire for the past. For example, if you once lived in a particular city and have had to move away, but you longed to go back and frequently reminisced about the times you spent there, this would create a feeling of nostalgia. It might also be described as a fondness for a previous time. When feeling nostalgia, you may notice intense emotions such as sadness or pleasure, depending on how the memories make you feel.

According to the online Merriam Webster dictionary, nostalgia is a “pleasure or sadness caused by remembering something from a past time and wanting to experience it once again.” Therefore, it is worth noting that whilst some might call nostalgia a sickness of sorts, it is in fact the simple act of remembering or taking an interest in the past.

Nostalgia can be seen in conversational language, especially in times where one might make a speech about a past time or event in fondness or some other type of emotion. However, it can also be used as a literary device as a way of talking about an interest in the past. We can see this quite clearly in the romantic movement of English literature, where many authors used nostalgia as a way of putting the focus on the pleasure or pain of the past.

Examples of Nostalgia In Spoken Language

We might often hear people speaking in a nostalgic sense, this can be a way to express their feelings and emotions surrounding a particular time and can be used to effectively put the listener in the mind set of the speaker. We are now going to take a look at some examples of nostalgia being used in a spoken context.

Examples of Nostalgia In Literature

As we mentioned, nostalgia is frequently used as a literary device. The reason for doing this is similar to its use in spoken language, the writer is giving the readers the opportunity to feel and yearn in the same way that they or the character they are writing about does. It is an excellent way of expressing emotion. However, nostalgia is also used as a way to change the mood of a piece, turning it from sadness to pleasure or vice versa. Let’s now take a look at some examples of how nostalgia has been used in various pieces of written work.

Nostalgia can be used as a literary device which can allow the writer to discuss feelings of pain or pleasure when remembering events, places or people from the past. The idea is that feelings of nostalgia bring about intense emotions and this is a great way to engage readers in the writing.

We can quite often see the use of nostalgia in spoken language, especially when people are talking about events or things from their past and wishing that they were back there once again.