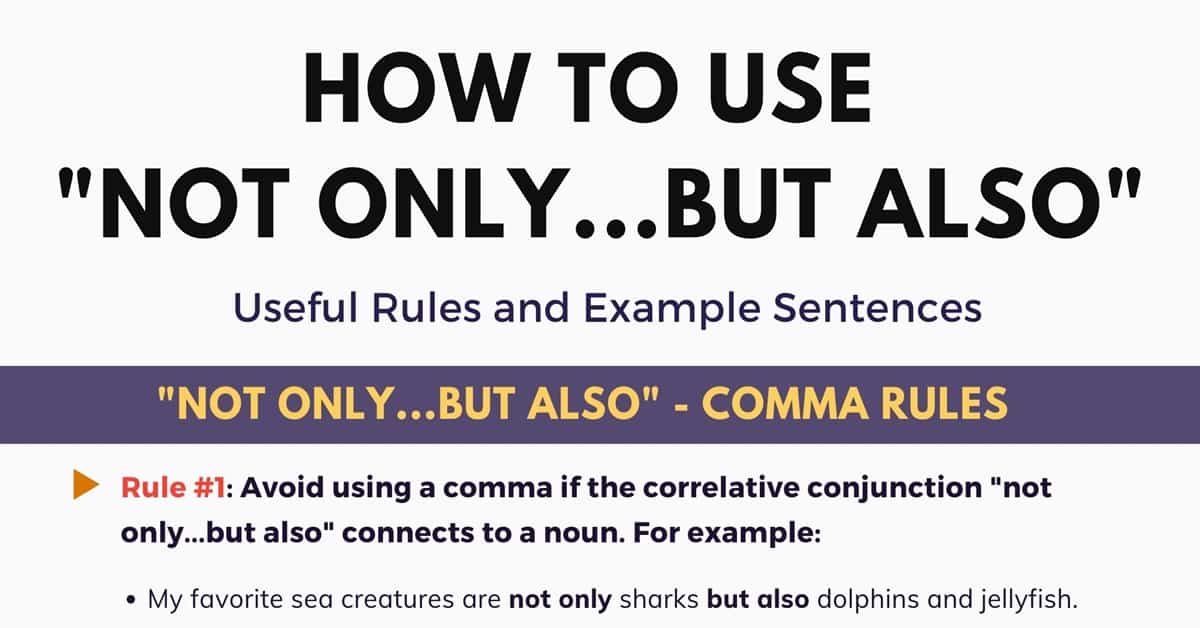 Not only but also | Comma Rules

How to Connect “Not only…but also” with a Noun

In this example, “but also” precedes the plural noun “dolphins”. The above sentence does not support the use of a comma.

Rule #1: Avoid using a comma if the correlative conjunction “not only…but also” connects to a noun.

How to Connect “Not only…but also” with a Clause

This example has a comma placed after “not only” and in front of “but”. A comma comes before the word “but” because the conjunction precedes an independent clause. A comma needs to be applied if the correlative conjunction connects to a specific type of clause.

Two different types of clauses can act in a sentence with correlative conjunctions: independent and dependent. Not all clauses operating in sentences with correlating conjunctions need to have a comma interjected into them.

Rule #2: A correlative conjunction needs a comma when joined to an independent clause.

If you remove the word “but” you are left with “also his pencils.” The second clause is dependent because it needs the first clause to form a complete sentence. In this instance, you would not put a comma in front of the word “but”.

Rule #3: Do not use a comma with a correlative conjunction linked with a dependent clause.

Not only but also | Forming Rules

Rule #1: Not only…but also is used in the middle and end of the sentence.

To emphasize the Noun

To emphasize the Verb

To emphasize the Adjective

To emphasize the Adverb

Rule #2: Not only…but also is used at the beginning of the sentence.

Not only but also | Infographic

Here is a question.
Not only Sue but also May studies four hours a day to make____(herself or themselves) ready for the test.
The blank which answer is correct? Thank you.

I think herself would be the correct answer, but honestly I’m not sure my friend.
because in the “neither … nor … / either … or …” structures we decide to bring plural or singular verb/pronoun based on the last item so I think in this structure,we use the same too.