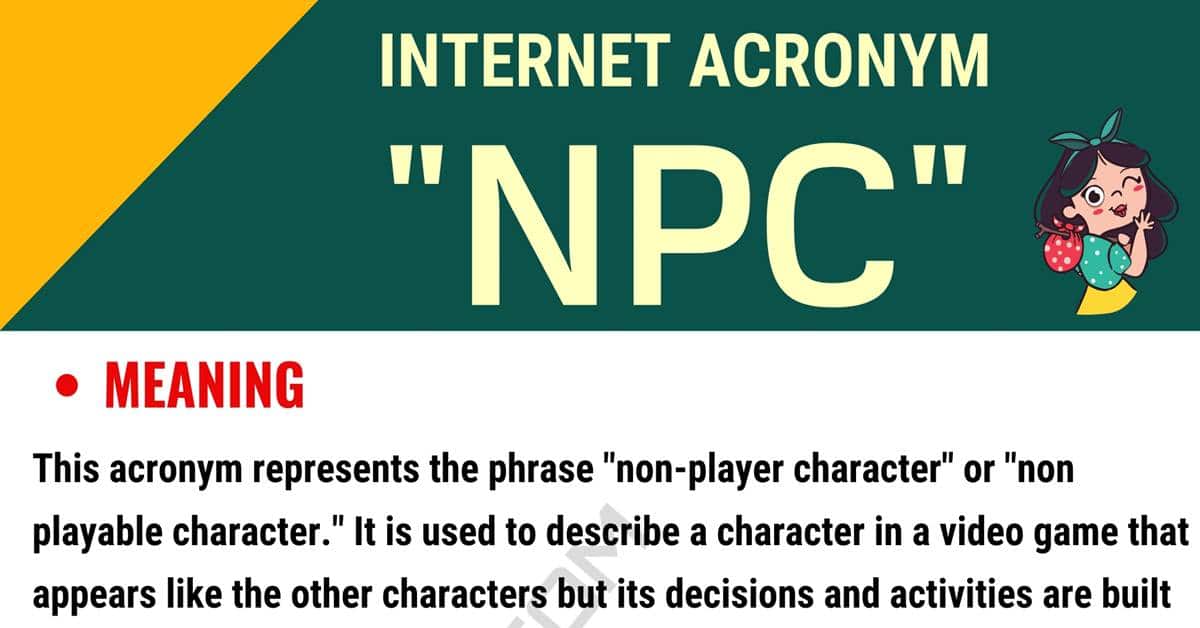 What does NPC stand for? If you are an avid gamer, then you probably already know what this acronym means. If you just started gaming or are not a gamer then that is the reason you are probably on this page because you are wondering what it means after hearing other players mention the term. Here you will find the meaning of this term, information about its origin, and other meanings that this acronym can represent. You will also find some example conversations that highlight the usage of this phrase in the hopes that it will help you to better understand its definition. Finally, you will see some synonyms for the acronym or the phrase that it represents most popularly.

What does NPC Mean?

This acronym represents the phrase “non-player character” or “non playable character.” It is used to describe a character in a video game that appears like the other characters but its decisions and activities are built into the code for the game and are not made by an actual person playing the character.

Many people are familiar with these types of characters from playing video and computer games. However, what many people don’t realize is that this term was used long before the invention of video games. The term was first used to describe characters in tabletop games like Dungeons & Dragons where certain characters were controlled by a gamemaster or referee. This means the term has been used at least since 1972 and possibly even longer.

This term can also stand for some other phrases too. Some of the other phrases that this term can represent are “not politically correct,” “non-psychotropic cannabis.” and “National People’s Congress.” The term can also be used as a descriptive standalone word to describe a social justice warrior or a liberal. It denotes someone who appears not to have the ability to think for themselves and just “goes along with the crowd.” The term can also be used to describe an extra in a play or movie to fill in a crowd of people.

An online conversation between two users on a game forum.

Other Ways to Say “NPC”