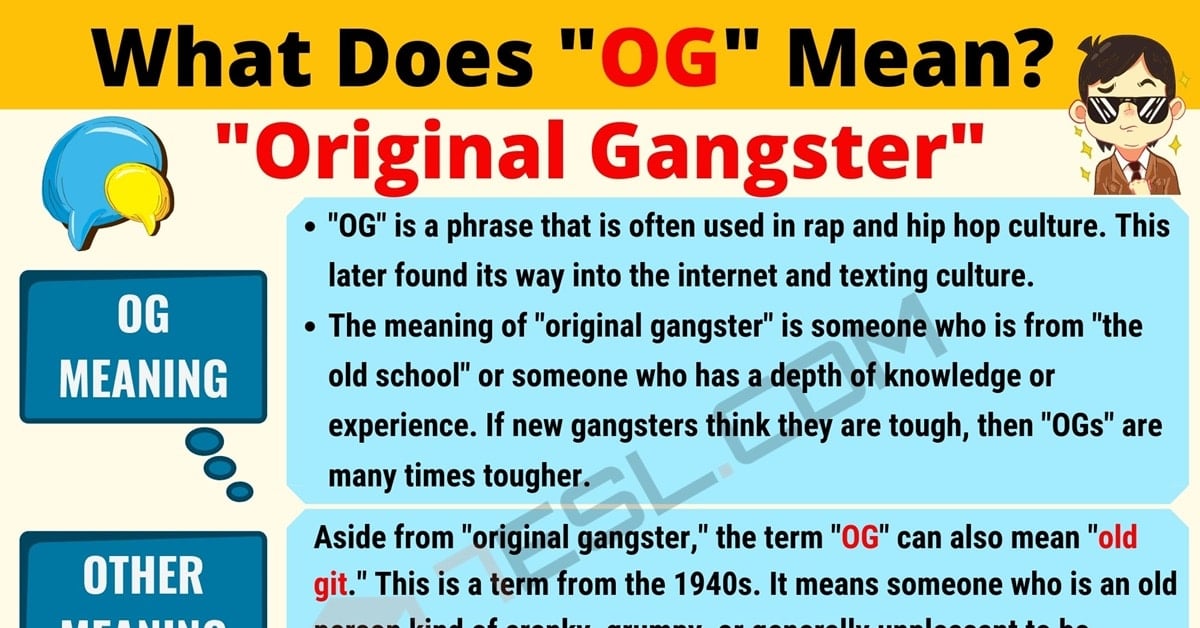 What Does “OG” Mean?

It is a phrase that is often used in rap and hip hop culture. This later found its way into the internet and texting culture. The long-form of “OG” is “original gangster.” The meaning of “original gangster” is someone who is from “the old school” or someone who has a depth of knowledge or experience. If new gangsters think they are tough, then “OGs” are many times tougher.

Although “OG ” used to mean “original gangster,” current social media norms dictate that someone who is an “OG” is an original, iconic representative of a specific specialization or achievement. It can be taken to mean “the original,” in short.

Where Does the Term Come From?

While the term “gangster” is used in this context, the way it is currently used has little to do with actual gangsters, street gangs, or organized crime.

Now, many use it in general speech or in on-line communication to show that someone is an authority on something or has exceptional skill in a certain area.

On social media, a wide range of different people and ages use “OG.” A sampling from Twitter shows people from teens to their 40s using the term. It’s generally used with a little bit of irony or levity when used in this currently-common context. If it’s used seriously, it is more likely to mean “original gangster” or “intimidating founding member.” Sometimes, younger people who use it simply mean “the original,” with no other connotations attached.

When to Use the Term “OG”

You can use “OG” when you mean “the original” of a specific area. Keep in mind that as with most slang, “OG” should typically only be used in informal settings. It’s a fairly common term, so most people who speak English natively or spend a lot of time on websites that use a lot of English slang will understand what you mean when you say “OG.”

Let’s take a look at some examples in action.

In this first example, we can see that two gamers are talking about their skill with regards to a certain video game. Gamer 1 comments that he is playing a lot but is never really gaining skill. Gamer 2 tells him to consult NightStalk3r. Here he uses the term “OG” to show that he is either a very skilled player or someone who has been playing the game for a long time. Either way, Gamer 1 can possibly learn a lot from this “original gangster.”

This conversation over office messaging software by two employees shows another use for “OG.” Coworker 1 wants to take a vacation but thinks that the company is too busy to let him do so. The current supervisor is strict and will probably deny his request for time off. Coworker 2 gives the suggestion that she should ask the boss of the supervisor. Here, the internet slang term is used as a noun. It means someone who is in a position of authority or has been in the organization for a long time.

On social media platforms like Twitter, “OG” is most likely to be used in passing sentences, in declarations, or in bios, as opposed to in full conversations. This is partly because of how social media is set up, with so much of it designed to be one person at a time talking to all their followers, and partly because the term is often used as part of a title or label.

The following are some examples of how “OG” might be used on social media platforms.

In this context, the person is saying they are one of the first or foremost experts on beauty.

In this case, the person is saying the new cast isn’t as good as the original Avengers.

In this context, it’s used a little closer to its original meaning, to imply that someone was the person who established an intimidating role.

All of these uses still basically come down to the same thing, with “OG” being replaceable with “original.”

Aside from “original gangster,” the term “OG” can also mean “old git.” This is a term from the 1940s. It means someone who is an old person kind of cranky, grumpy, or generally unpleasant to be around.

Alternatives to the Term “OG”

If you want to use “OG” but aren’t sure about your usage or aren’t in the right situation for it, there are alternatives you can use instead.

For most slang, including “OG,” you can be more literal and precise about what you’re trying to say as an alternative. You could instead say “the original,” “the first in this position,” or any other descriptive phrase that fits the given situation.

You can also use “original gangster” if you aren’t in a position in which you should avoid mention of gangs, even if the mention is dated or indirect. This is usually used in the same way that Mr./Mrs. are used, as a title and with a little respect, whether that respect is sincere or sarcastic. 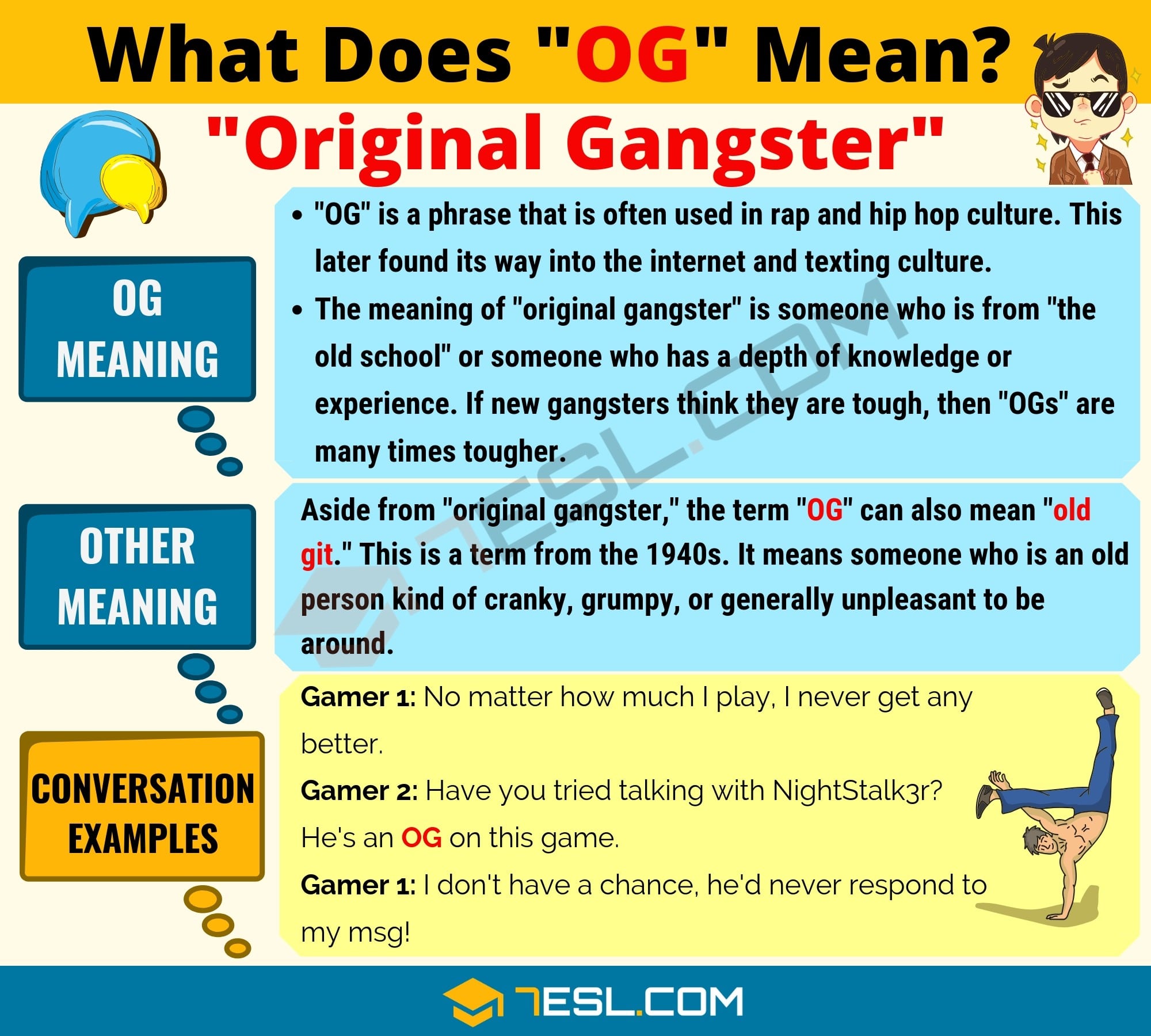 When I walk down the some people call me “OG”. What does that means in the street?