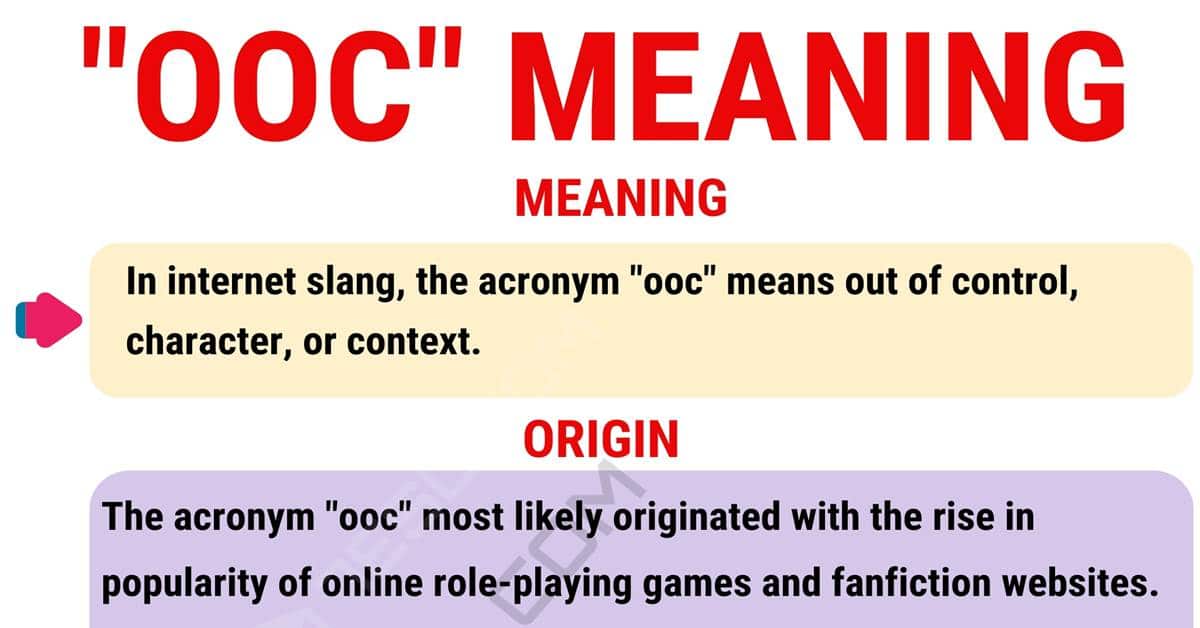 What does “ooc” mean? Online chatting and texting sometimes require that someone relate a message or thought quickly. To expedite the texting and chatting process, acronyms were developed to stand for particular phrases. One of the acronyms to sprout up on the internet for this purpose was “ooc.” Here in this article, you will be able to find the meaning of this acronym and other meanings if any are available. You can also find some information regarding its origin and see the acronym used properly in hypothetical online/text situations. Lastly, you can check out the suggestions offered to learn some other ways to say the phrase associated with this acronym that still states the same message.

What Does “OOC” Mean?

In internet slang, the acronym “ooc” means out of control, character, or context.

The acronym “ooc” most likely originated with the rise in popularity of online role-playing games and fanfiction websites. Although not specifically stated, the acronym “ooc” is popularly used in these games and sites to indicate that someone has stepped out of character. In other words, they are acting like themselves and not as the character they are supposed to be portraying. It is uncertain if this term existed before the invention of the internet and these types of sites. The opposite of “ooc” is “bic.” This is typically used in instances where someone must step away from the keyboard for a moment for one reason or another. Before leaving the keyboard they would type something like ((OOC – going to the bathroom)) to let the other in the game know they would be stepping away in real life. When they return to their keyboard they would type simply BIC.

The acronym “ooc” does not appear to have any other meanings in the world of internet slang. However, “ooc” is the acronym for a few other phrases such as “out of curiosity,” “out of course,” “out of coffee.” “out of clan,” or “out of code.”

An online chat exchange during gameplay on Twitch.

The best alternatives to the widely used acronyms are to type what you mean out, such as: