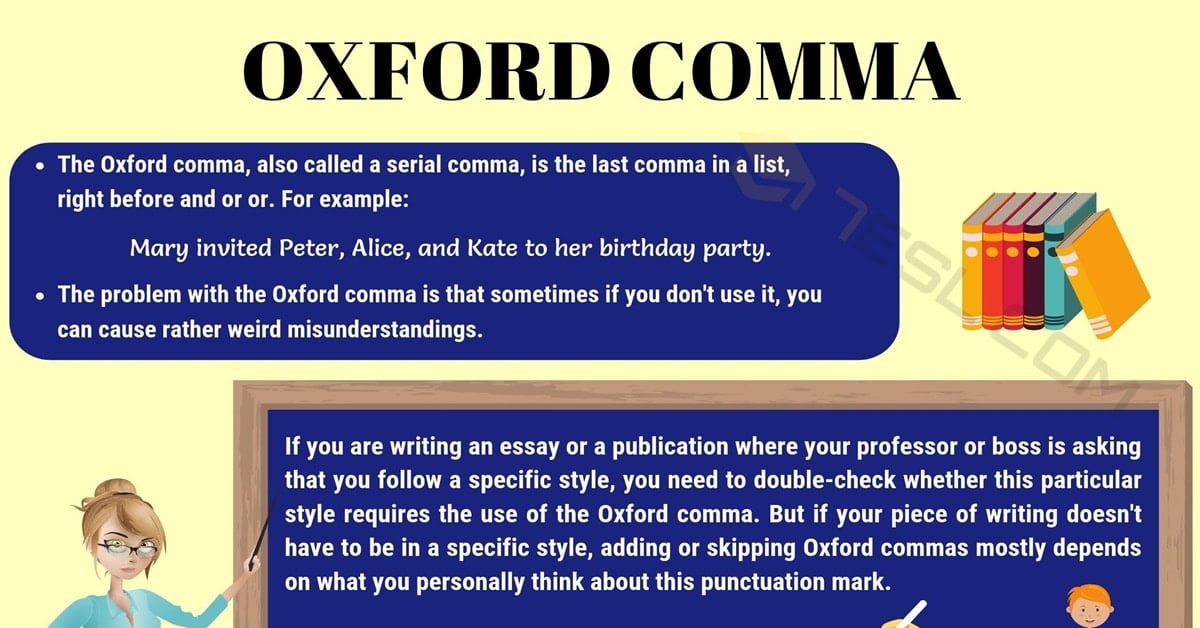 The Oxford comma is a punctuation mark that probably causes more confusion and argument than any other. Some people believe that it should be a thing, while many other people believe that it doesn’t serve any purpose, so they don’t use it. Style guides also cannot give a definite answer about whether it should or shouldn’t be used. But what the fuss is all about and what, exactly, is the Oxford comma?

The Oxford comma, also called a serial comma, is the last comma in a list, right before and or or. For example, take a look at this sentence:

The comma that appears right after Alice is known as the Oxford comma. If you were to use AP style, which is what the majority of newspaper reporters do, you wouldn’t need it. So, the sentence above, but written in AP style, would look slightly different:

How to Use the Oxford Comma Correctly?

The problem with the Oxford comma is that sometimes if you don’t use it, you can cause rather weird misunderstandings. For instance, compare these two sentences:

The only difference between these sentences is the fact that the one has an Oxford comma, while the other doesn’t. And still, what the reader will understand from each of the sentences can be very different. In the first case, Patricia is going to an event with her sisters plus Anna and Rebecca: two other girls, possibly her friends, classmates, or colleagues. However, in the second sentence, the meaning that the reader will get is that she will attend the event with her sisters whose names are Anna and Rebecca. Depending on what the truth is, you need to figure out whether you need or don’t need to use a serial comma.

With this particular sentence and all the similar ones, there’s one thing you can do to make matters clearer: rephrase it. Take a look at the following sentence:

The issue here is exactly the same as above: without the Oxford comma, it seems that Brad Pitt and Angelina Jolie are your parents. If this isn’t the case, simple rephrasing will do the trick without you having to use an extra punctuation mark. So, instead, you might say:

By slightly rearranging the order of the items in your list, you will make sure that the reader understands exactly what you are trying to say. Interestingly enough, if you add an Oxford comma after Angelina Jolie in the sentence above, the meaning will not change.

When to Use the Oxford Comma | Useful Tips

And now the big question is, do you use the Oxford comma or not? There is no definite answer to it. If you are writing an essay or a publication where your professor or boss is asking that you follow a specific style, you need to double-check whether this particular style requires the use of the Oxford comma. But if your piece of writing doesn’t have to be in a specific style, adding or skipping Oxford commas mostly depends on what you personally think about this punctuation mark. There are only a few guidelines that you should follow.

Firstly, always check if the presence or the lack of an Oxford comma is capable of creating any misunderstanding. If this is the case, consider rephrasing the sentence to make it clearer.

Secondly, make sure that, if you’re using the Oxford comma, it’s necessary. For example, look at this sentence:

If you were to add the Oxford comma after the biscuit, it would seem that your list has three options: something sweet, a biscuit, a bar of chocolate. However, “something sweet” is the “title” of a list that consists of two alternatives. So, an additional comma is not needed.

Finally, try to be consistent. If you start your text by using a serial comma in your first list, don’t forget to use one in your second and third list as well. 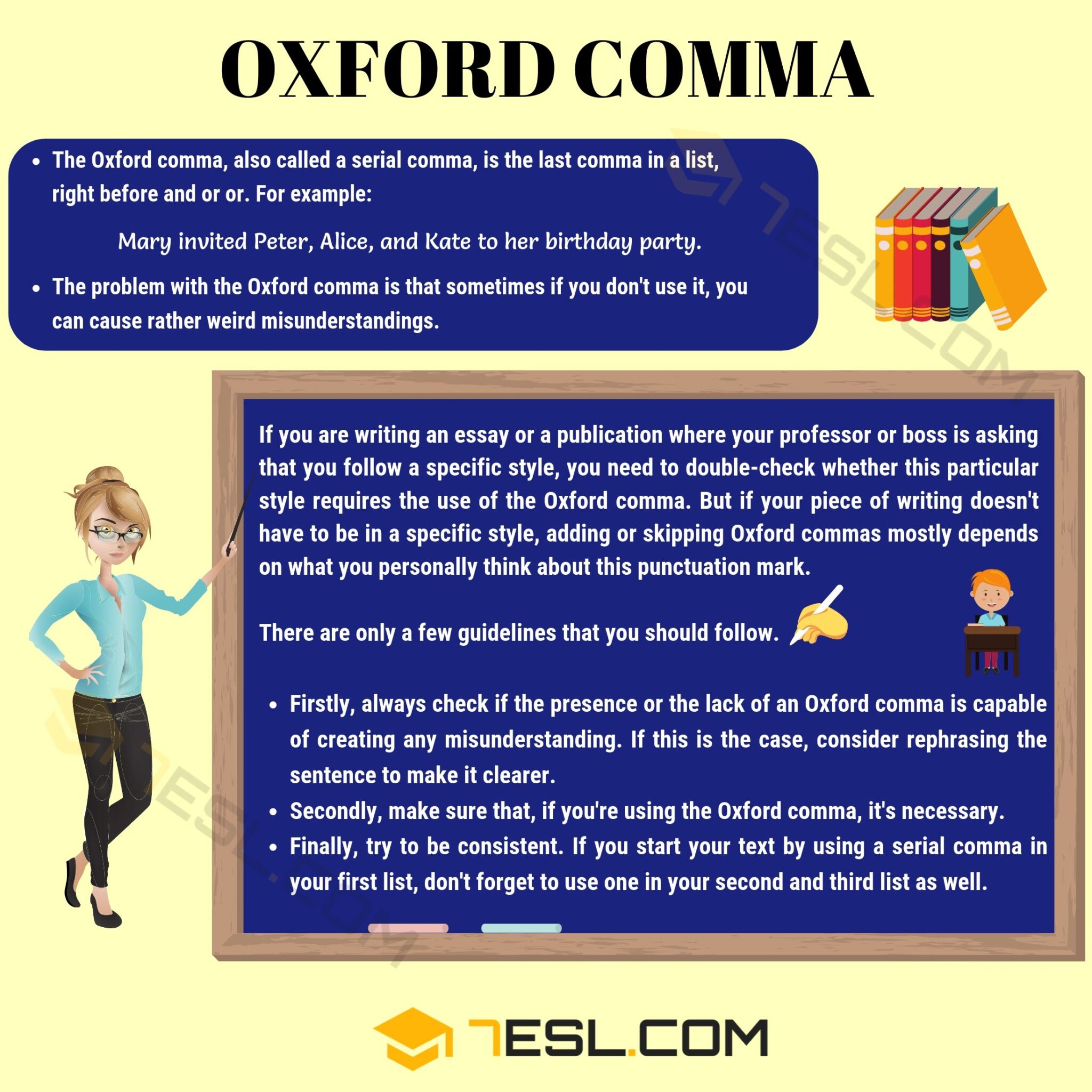 I am the…first … comment,but not the…least,I hope!
All your issues or articles are perfect!
Thank you,very much!
Many wishes from Athens,Greece.