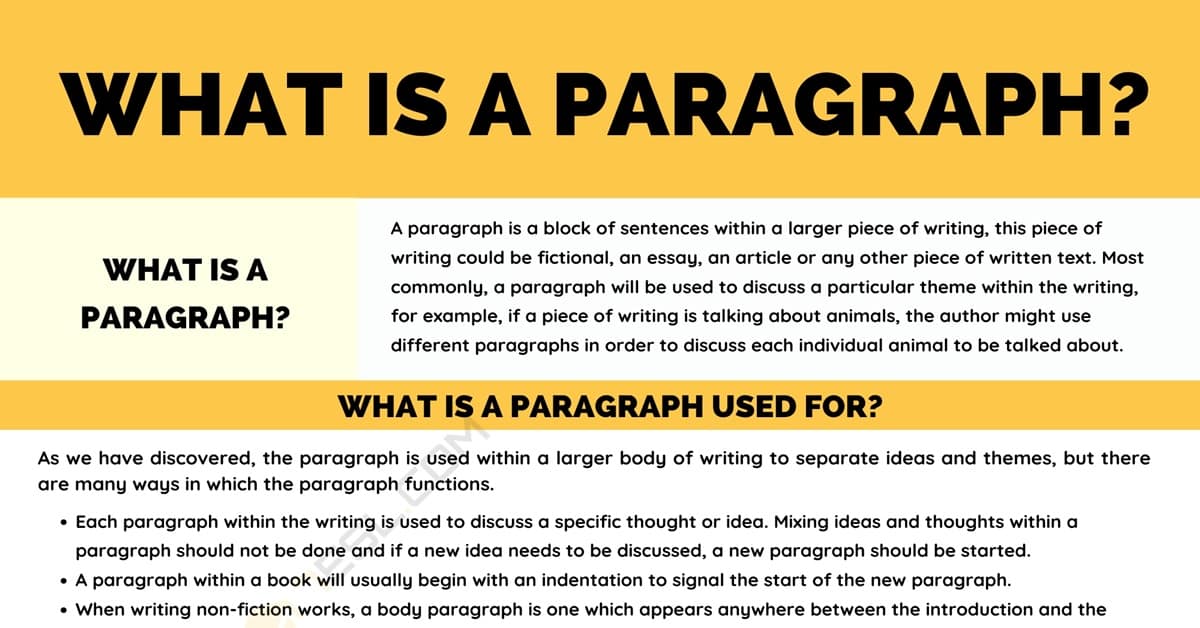 When it comes to writing, there is a multitude of things to consider. The term paragraph is often heard but what exactly is a paragraph and how are they used effectively within writing? In this article, we are going to be looking at the definition of a paragraph as well as how they are used. We are going to be taking a look at some examples of the paragraph to gain a better understanding of their function.

What Is A Paragraph?

What Is A Paragraph Used For?

As we have discovered, the paragraph is used within a larger body of writing to separate ideas and themes, but there are many ways in which the paragraph functions. Let’s take a look at some of the things that a paragraph does and the rules that need to be followed when writing one.

How Long Should A Paragraph Be?

Whilst there is no set rule for how long a paragraph is ‘allowed’ to be, there are suggestions that a good paragraph should not exceed five sentences.

The length of the paragraph will depend highly on what it needs to discuss and the information within it. There are certain things that each paragraph should adhere to, let’s take a look at these rules.

How Should A Paragraph Be Organized?

This type of paragraph is used as a way to tell a story and should be written in chronological (time) order. Let’s see an example of a good narration paragraph.

A man from North Carolina was met with quite the surprise last year whilst river fishing: a piranha. The man reeled in a 1lb 4 ounce fish that has an unusual bite, he could not correctly identify it but a fisherman nearby was able to. At first, he couldn’t believe that he had caught a piranha. He said ‘That’s no piranha, they don’t live around here.’ And he was right, the piranha is usually native to South America and the state of North Carolina has prohibited keeping the fish domestically and bringing it into local waters. This carnivorous fish had likely ended up here as a result of an illegal owner had released it into the river. Officials are hoping that this was the only one in the river but the locals are now wary when entering the water.

A description paragraph will give specific details which appeal to the sense such as how something smells, looks, tastes feels or sounds. This type of paragraph should be ordered in terms of appearance or by topic.

My mother is a tall woman with broad shoulders and a short, cropped hairstyle. Often people mistake her for being male, and this irks her somewhat because she prides herself on her feminine rituals. She always smells of roses due to the excessive amount of perfume she uses and her skin feels like a newborn baby’s. Her silky voice is soft and shows off her caring nature. Despite her imposing build, her femininity exudes from every part of her.

The process paragraph is one which is used to explain something in steps. It is usually laid out and organised as a sequence. Let’s take a look at an example of this.

To prepare the sauce firstly, you should add the chicken stock to the pan along with two cloves of garlic. Secondly, after the mixture has begun to simmer you should sprinkle in the oregano and basil and allow the sauce to cook for two minutes. Finally, you can add in some cornstarch to thicken the liquid and it is now ready to pour over the meat.

This type of paragraph will explain the particular parts of the topic, separating them into groups. Here is an example of a classification paragraph.

First dates can be categorised as clingy, boastful, awkward or successful. The successful first date will be made up of both people expressing ideas about who they are, what they like and so on. These dates usually end in a plan for a second meeting. A clingy date will end up with one person almost begging to hear information about the other person. But the non-clingy person will not be interested. On a boastful date, one person will talk exclusively about their own talents or skills. The second person is not asked about themselves. An awkward first date will usually involve a lot of silence with both people unaware of how to act. Whilst there are many dates happening every day, they usually fall into one of these categories.

An illustration paragraph is one which is used to give examples and show how the examples can be used to prove the author’s point. Let’s take a look at an example of this type of paragraph.

A wrestler will put in a lot of time and effort to be able to be considered to be great or even good. A wrestler will run 5 miles each morning and will lift weights with his team each morning. Practising the sport can be done fro around 2 hours per day and can include takedowns or other technical work. The wrestler will also take part in live matches which involve intense conditioning afterwards. A lot of serious wrestlers are required to put in even more hard work by performing 100 takedowns and stand-ups each day, in order to make themselves better. Strict workouts and good diet are the foundation of the lives of a lot of wrestlers by controlling their weight limit week by week. To be a wrestler, one must be mentally as well as physically tough. This is a sport for men, not boys.

This is so goood