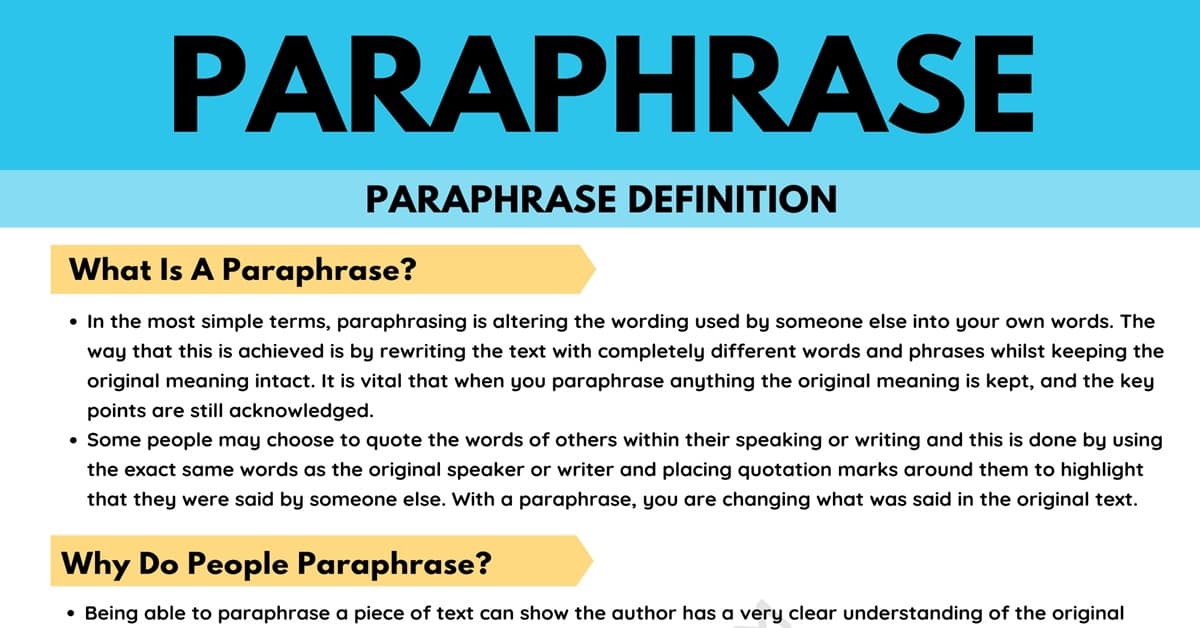 What is a paraphrase? You may have heard someone using the word paraphrase when talking about the English language, and this is a concept which is very commonly used. But what do people mean when they talk about paraphrasing? In this article, we are going to be looking at exactly what a paraphrase is and how it is used. We are also going to be taking a look at some examples of paraphrasing as a way to gain a greater understanding of the concept.

What Is A Paraphrase?

Some people may choose to quote the words of others within their speaking or writing and this is done by using the exact same words as the original speaker or writer and placing quotation marks around them to highlight that they were said by someone else. With a paraphrase, you are changing what was said in the original text.

It is important to remember that when you are paraphrasing something, that you provide references for the reader.

Why Do People Paraphrase?

There may be a variety of reasons why someone would opt to use paraphrasing over quoting. Let’s take a look at some of these reasons now.

When Is It Right To Paraphrase?

Sometimes simply quoting the words of another person is enough, however, there are times when it is preferable to paraphrase. Let’s take a look at what would make the ideal time to paraphrase:

There are some easy steps that you can follow at times when you need to paraphrase, let’s take a closer look at these now.

There are also some handy tips that can make paraphrasing very simple when you need to do it.

Now that we have a good understanding of what paraphrasing is and what it is used for, we are ready to start looking at some examples. Studying these examples will give you a better understanding of how the process works.

The composer, Beethoven lived and worked in the romantic era of music and as such his music falls into the romantic category, but most people would call him a classical composer.

The same can be said for J S Bach, who, whilst being commonly referred to as a classical composer, was, in fact, a baroque musician.

Beethoven, one of the most well-loved composers from history is often called a classical composer, however, his career fell in the romantic period. Hundreds of years before this there lived another famous composer who is often credited as being classical, J S Bach was a baroque composer with the style being evidently clear.

We can see in both pieces that the key points have been retained but the wording has been totally overhauled.

Let’s look at a further example.

In the time of the baroque era, there were nowhere near as many musical instruments available in the orchestra for composers to work with. If you listen to music from this time regularly, you will be able to hear that the harpsichord was a favoured instrument, almost fashionable at the time.

However, later down the line as more instruments became available, classical composers would make the most of this and you begin to hear more strings and wind instruments in the pieces.

As time progressed, even more, many of the romantic composers favoured the piano with many pieces featuring simply a piano and one other instrument, also known as a concerto.

Depending on what period of time a piece of music was written will highly depend on what instruments were used. This was mainly due to a lack of options in the earlier days of music, with composers being limited to their choices.

One of the most popular options in the baroque era was the harpsichord, giving the music of this period a unique sound that is easily recognisable to the discerning ear.

Moving through the years, more instruments entered into the various sections of the orchestra giving composers greater freedom with the sounds they could create.

The piano became a popular choice during the romantic era with many concertos being composed for this instrument along with one other, quite often a violin.

Paraphrasing is a great skill to have as it enables you to rewrite a piece of text using your own words whilst keeping the main points. There are certain techniques which can be used whilst paraphrasing that make it easier to do.

I love these. I appreciate for helping me

Of course, I do love my thoughts.