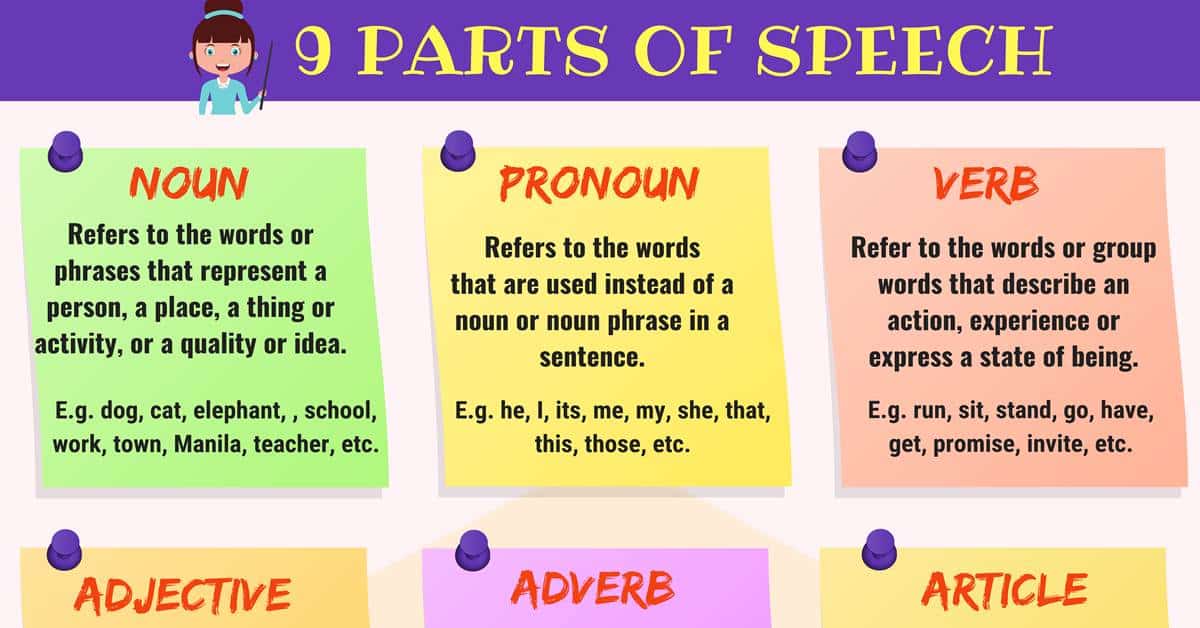 In the English language there are various parts of speech which are put together in order to form a sentence. Without these, the language would never be able to function.

What Are Parts Of Speech?

In the English language, there are around ten common parts of speech. These include nouns, verbs, adjectives, adverbs, pronouns, prepositions, conjunctions, interjections, determiners, and articles.

Though the meanings of these categories are explained in the following sections, just know that these parts of speech play a grammatical role, or serve a grammatical function in language, including sentence structure and meaning.

Closed word classes are parts of speech that are consistent and do not have newer words introduced to them over time. These include pronouns, conjunctions, determiners, and prepositions.

Open word classes are parts of speech that have newer words introduced to them over time. These include nouns, verbs, adjectives, interjections, and adverbs.

Different Parts of Speech (with Examples)

A noun is a word which gives a name to something, in some cases you might hear them referred to as a ‘naming word.’ There are various different subcategories of nouns such as the proper noun, the collective noun, the possessive noun and the common noun. Each one of these serves a different purpose, let’s look at this a little more closely.

The proper noun is used to name a specific item, for example the names of places or people or perhaps a movie or song title.

A collective noun is used to refer to a group of nouns, for example people or animal groups.

A possessive noun is used to show ownership of something, this is done by adding an apostrophe and an s, like in the following examples.

A common noun is the most simple form of a noun and gives a name to an item.

Determiners and articles are parts of speech that are used with nouns or noun phrases to clarify them. They are usually placed in front of nouns (or noun phrases) and can help specify their identity, quantity, distance (from the speaker), or specific number (among other things).

Determiners are a part of speech that are placed in front of nouns to clarify their reference. They include categories such as:

Articles are a sub-category of determiners that serve as a type of adjective to identify nouns. They may be:

A verb is one of the most important parts of speech and is a word which is used to describe an action. There are three main types of verbs which are detailed below.

An action verb does exactly what you might expect, it describes an action.

A linking verb is used to show a state of being rather than a physical action.

A modal verb is used to ‘help’ the main verb and can show the speakers thoughts or attitude about what they are saying. For example, words such as might, must, could and can are all modal verbs.

A pronoun is one which replaces a noun, and once again there are various different types of pronouns within the English language. Each one is used in a different way, let’s take a look at some examples of this.

A reflexive pronoun is used to refer to self, for example myself or yourself.

This type of pronoun is used to refer to a non specific person or item, you might see words such as anything, few, everyone or all.

A possessive pronoun is used to show possession or ownership of something, for example my, his, their or yours.

A relative pronoun is used to introduce an adjective clause. You might recognise these as words such as who, which, that or whose.

An adjective is a word which describes a noun or pronoun, there are thousands of adjectives within the English language.

An adverb is used to modify, or further explain an adjective, verb or another adverb. They can add more information to a sentence making it more clear and easier for the listener to imagine what is being described in detail. Most of the time, adverbs will end in the letters -ly but there are some exceptions to this rule such as the words very and never.

A conjunction is used as a way of joining two or more ideas or words together. Most commonly you will see the words for, and, not, but, or, yet and so used as a conjunction.

And, however, still, but, or, so, after, since, before, either, neither, because, unless…

A preposition is used in English to show a relationship between two words or phrases. You might recognise a preposition as being words such as in, before, on, at, to, between etc.

In, on, at, about, apropos, according to, after, along, above, except, from, near, of, before, since, between, upon, with, to, after, toward…

An interjection could also be thought of as a exclamation. They are used to emotion, reaction or excitement and have no grammatical link to anything else within the sentence they appear.

How To Determine The Part Of Speech In A Sentence

Parts of Speech and Sentence Construction

In sentence construction, parts of speech are present in what are known as the clauses of sentences. Clauses are groups of words that have a subject and a verb. The verb is also part of an entire verb phrase known as a predicate.

In its simplest form, a sentence can have one independent clause.

For example, the sentence “I walk to the store” contains one clause.

This entire sentence “I walk to the store” is an independent clause, expresses one subject doing one action — and is known as a simple sentence.

Knowing this, apply the fact that nouns and pronouns will often be the subjects or objects of simple sentences, while verbs will convey actions. So once again:

Complex sentences also contain a subject and a verb, but can not stand alone as independent clauses. For example:

“since the weather is sunny.”

Here, “weather” would be the subject, and “is” would be the verb. So, “I walk to the store since the weather is sunny” would be a complex sentence. The parts of speech in the second part here would be:

Parts of Speech in English | Pictures

In the English language, there are eight different parts of speech and each one serves its own purpose. Without them, we would not be able to form a coherent sentence and so it is important that we are familiar with what each of them is. In these images, we are going to look at each of the different parts of speech, what they are used for, and some examples of how they work within a sentence.

Parts of Speech in English Image 1 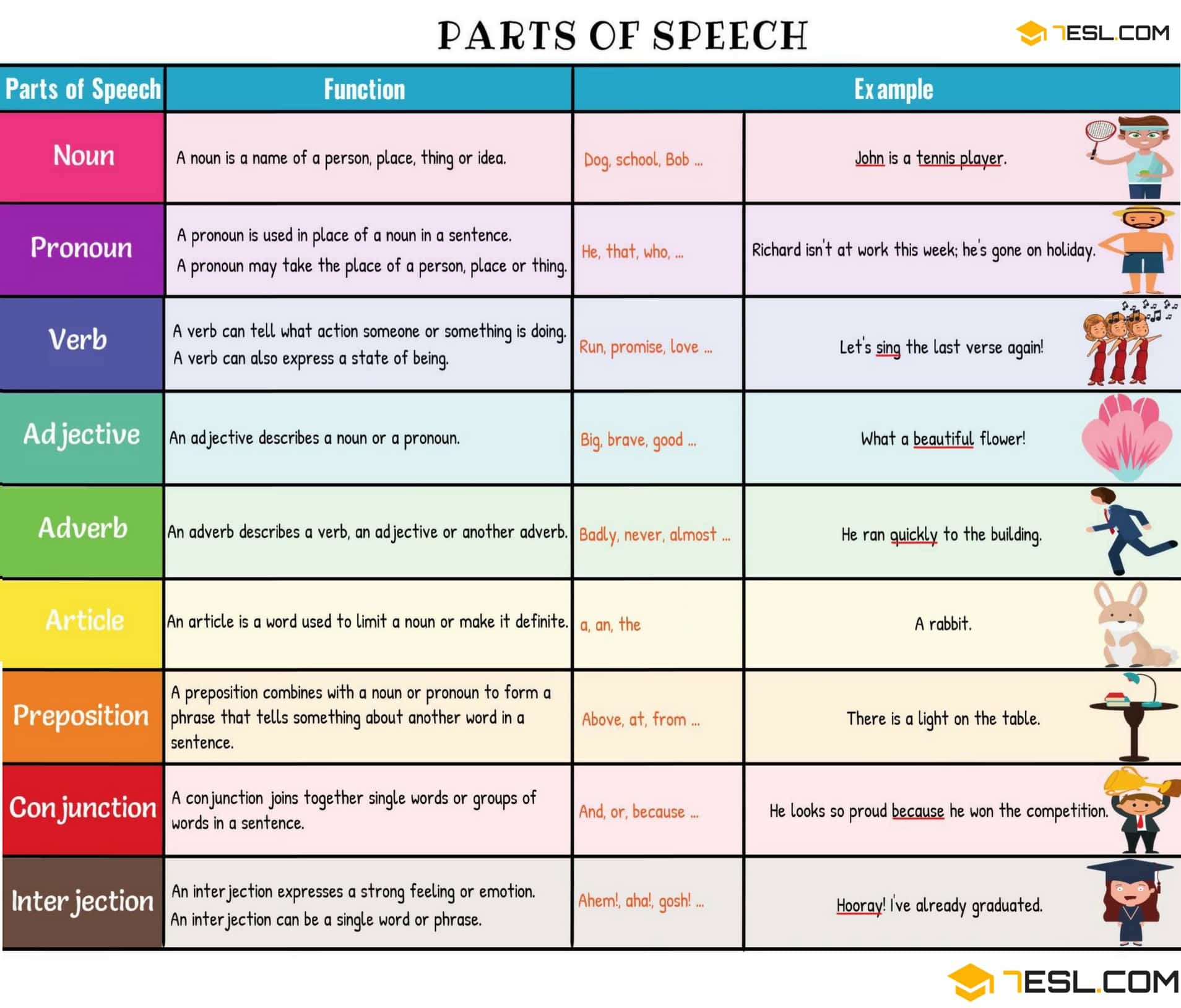 Learn all parts of speech in English with a useful video lesson.

These eight parts of speech can all be merged together to help you in creating grammatically correct and cohesive sentences in English. Whilst some are further split into subcategories, others function on their own, but each one is just as important as the next.

A. In the sentence “I ran to the tallest tree”, what part of speech is the word “tallest”?

B. In the 2000s, the word staycation described the act of staying home for a vacation. Since “staycation” is a noun and a new word, what class of words does it belong to?

C. In the sentence “I’ll have a few tacos”, what part of speech are the words “a few”?

It was help me in my h.w. that was given by my English teacher.