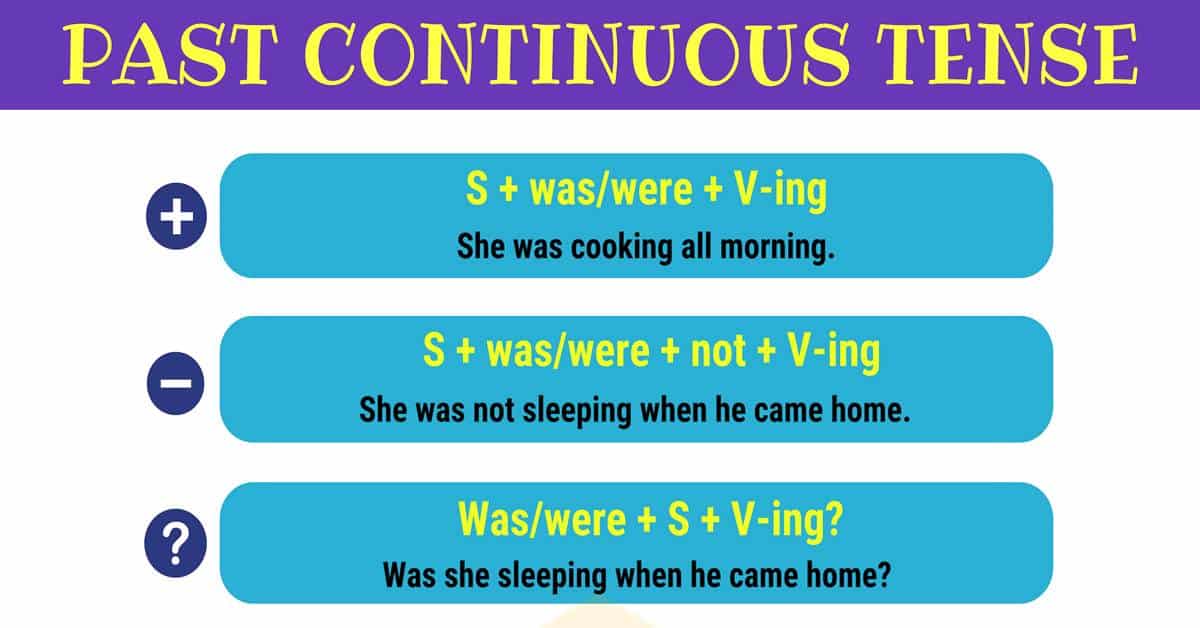 Past Continuous Tense! In this section, we are going to be looking at the function of the past continuous tense as well as the rules which we must follow when using it.

Learn how and when to use the Past Continuous Tense (or Past Progressive) in English with useful grammar rules, example sentences and ESL printable worksheets.

What is the Past Continuous Tense?

The past continuous tense is one which is used very frequently in the English language and is made up of an -ing verb preceded by the past tense of the verb ‘to be.’ For example ‘the animals were running gracefully through the field.’ This is an easy concept to understand and once you have mastered it, you will be able to speak much more freely about the past.

The past continuous, or past progressive, tense describes an action or situation that began in the past and is still going on in the present time.

The past continuous is easily formed by pairing up the verb to be’ with a verb ending in -ed’ instead of -ing’ (e.g. was talking).

The second section below has some great examples of how to use the past continuous tense in actual conversation. After studying those samples, continue reading to the end for some practice choosing the correct form of this verb tense to complete a sentence. When reading a book or article, it is often a great idea to keep a dictionary or thesaurus at hand, especially when encountering unfamiliar or irregular verbs.

The Past Continuous is used to describe actions that began in the past and often continued for a short period of time after the action started.

The structure of the Past Continuous Tense is:

At three o’clock yesterday, I was working in the garden.

Examples of the Past Continuous Tense

How to Use the Past Continuous Tense

The Past Continuous Tense Usage

The past continuous is used:

The past progressive is often used to denote an action that was interrupted by an event, or for two actions taking place in parallel.

I was working in the garden all day yesterday.

That could also be expressed using the simple past, as I worked…, which implies that the action is viewed as a unitary event (although the effective meaning is not very different).

To express interrupted action in the past

Often the past progressive is mixed with the past simple to show what was happening when something happened.

To describe repetition and irritation

He was always complaining in class.

For stative verbs that do not use the progressive aspect, the simple past is used instead.

At three o’clock yesterday we were in the garden.

Time Expressions Used with the Past Progressive Tense 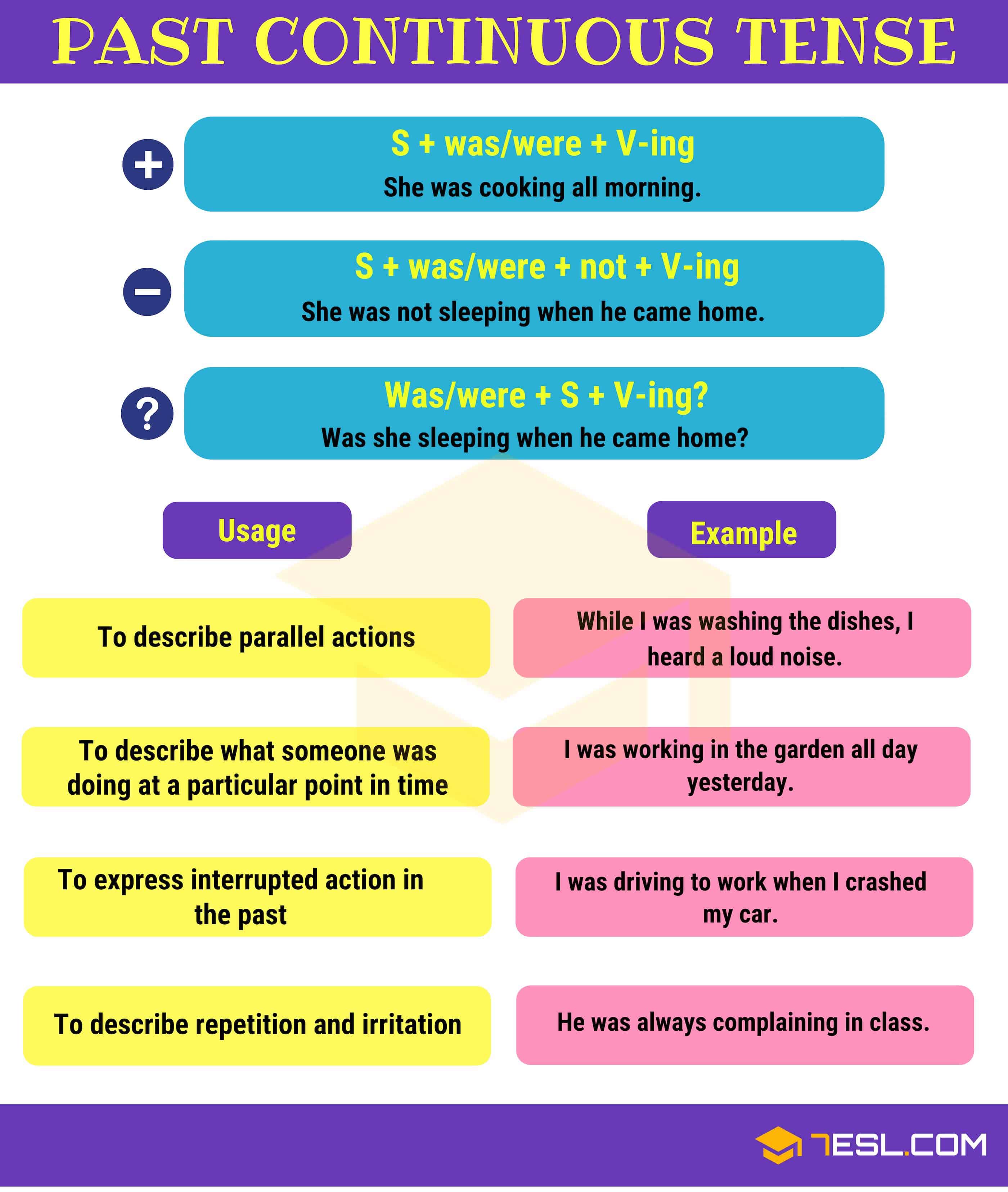 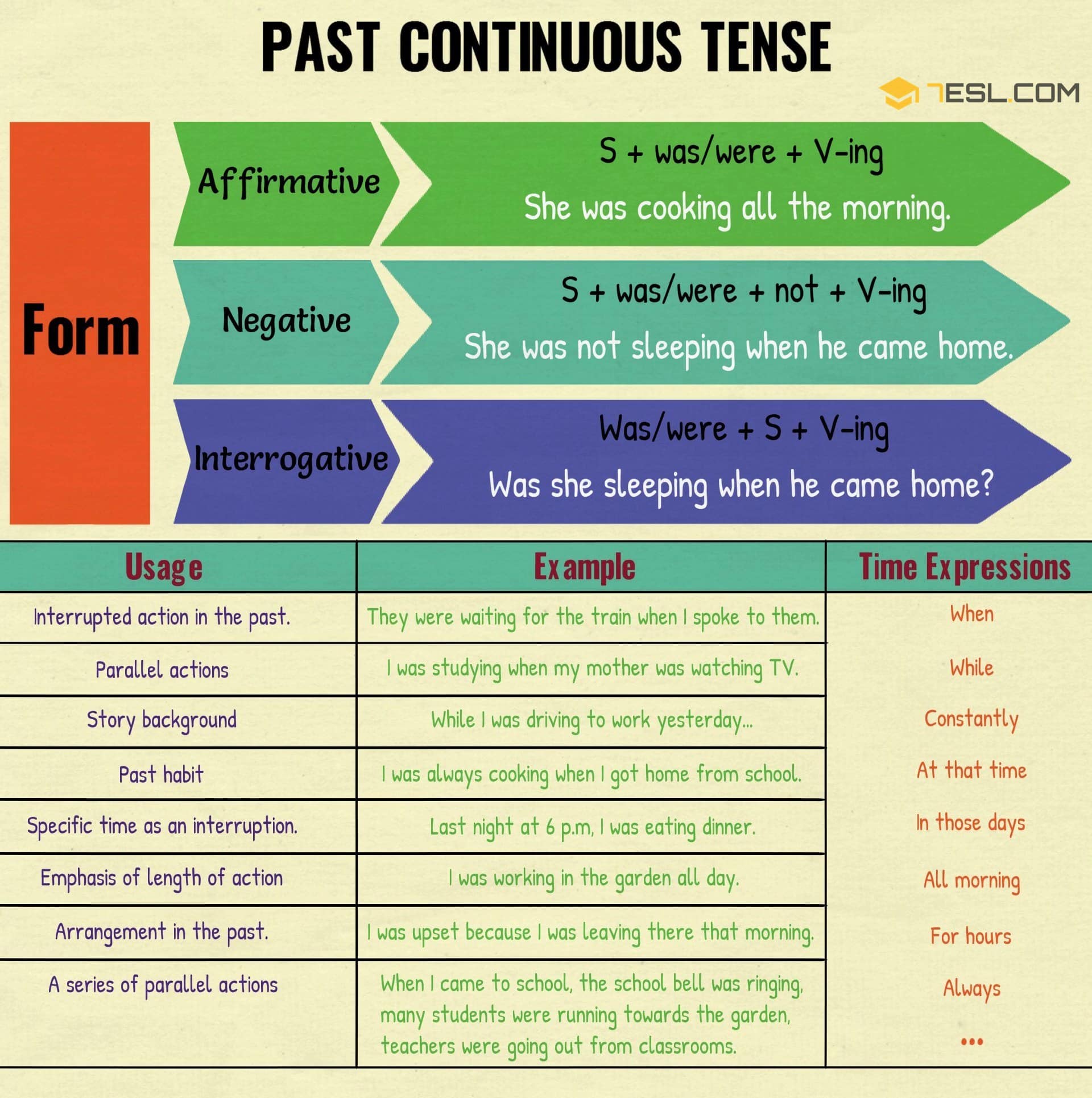 Instructions: Answer each question by selecting the right answer containing one or more words that best fill in the blank.

I want to distinguish between simple past and past continuous tenses

Very good site, but I know this

Great material! Thanks a lot for sharing!

Is past continous have structure for noun?