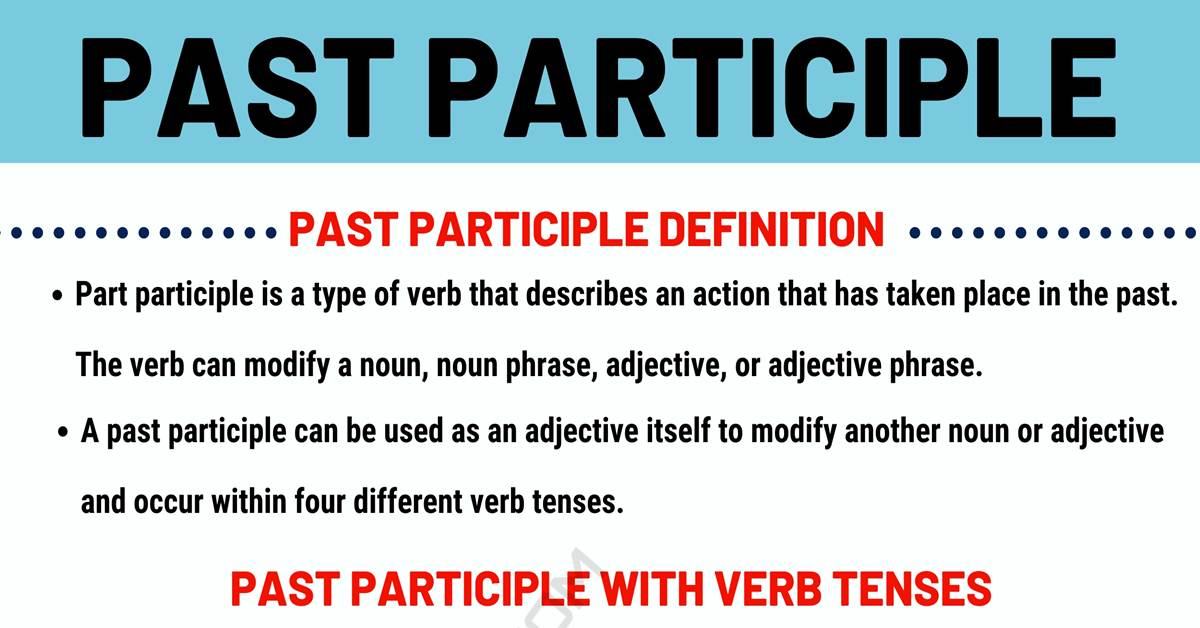 This article will go into detail about the different forms of the past participle, what each tense is meant to express, and to provide some examples making the study of grammar much easier. After reading through this, one will sound much more fluent whether English is a native language or a secondary language and, even better, one will feel comfortable taking part in the dreaded Internet grammar thread.

In the English language, there are a few grammatical structures that are used often, but the usage rules are not fully understood or, at least, cannot be easily expressed by most people. One such piece of grammar is the ‘past participle’, which is a type of verb that describes an action that has taken place in the past. The verb can modify a noun, noun phrase, adjective, or adjective phrase. Additionally, a past participle can be used as an adjective itself to modify another noun or adjective and occur within four different verb tenses (as shown below).

Past Participle with Verb Tenses

The simple past tense shows that an action occurred in the past and is done. This form of the past participle is equivalent to the verb past tense with no additional modifiers or helper verbs (e.g. ran).

The past perfect tense shows that action will finish before any additional steps can occur. This form of the past participle works hand in hand with the past tense of the verb ‘have’ (e.g. had run).

The past progressive tense shows some form of continuing or ongoing activity that occurred in the past but did not necessarily complete. This form of the past participle ends in -ing instead of -ed and works with the past form of the verb ‘to be’ (e.g. was running).

The past perfect progressive tense shows a continuing action that occurred and completed in the past. This form of the past participle ends in -ing instead of -ed and works with the past passive form of the verb have (e.g. had been running).

Forming the Past Participle

Regular verbs form the ‘general’ case for past participle usage and the majority of verbs are expected to follow the simple rule above. Unfortunately, there are some verbs that do not follow this case rule; usually, that is because English is an amalgamation of several different languages and some of the grammatical structures couldn’t quite bring every single word together into a single mnemonic.

However, as with most grammatical structures in English, there are exceptions to the general rule of thumb which we term ‘irregular.’ This is the tricky part of the language that requires memorization of the specific verb forms rather than remembering the general case as with regular verbs. Below is a list of some common irregular verbs and their past participle forms.

This list is not meant to be complete but to give some idea of how to create sentences using some of the most common irregular words in the English vocabulary. Other examples may be gleaned through regular reading of novels, stories, and non-fiction articles in conjunction with looking up unfamiliar words in the dictionary to see whether they fall into the regular or irregular category.

Below are several sentences that illustrate how to use a past participle in all the ways noted above.

Sentence: I performed the role of Iago in my high school’s rendition of Shakespeare’s play Macbeth.

Past Participle: had damaged

Sentence: My car had damaged the garage door when I pulled into the driveway too quickly.

Past Participle: was playing

Sentence: My son was playing piano in his school recital when the fire alarm rang, necessitating a speedy evacuation.

Past Participle: had been building

Sentence: I had been building my fort out of toy bricks one day when my little brother came in and smashed all my work to bits.

Sentence: I ran the whole mile without stopping as part of my physical fitness test.

Past Participle: had drunk

Sentence: My son had drunk two big glasses of water before bed which made it impossible to sleep through the night.

Past Participle: was throwing out

Sentence: My wife was throwing out important receipts all year making it impossible to complete a store return on time.

Past Participle: had been forgetting

Sentence: My son had been forgetting to complete his homework assignments for two weeks before I found out and helped him organize better.

As you can see from the examples above, the past participle when used with the correct verb tenses is a piece of grammar that is commonly used by everyone whether they know what it is called or not. The majority of the time it is used correctly, but it is the irregular verbs that cause the most confusion. With a little memorization, those types of verbs will roll just as naturally off the tongue. 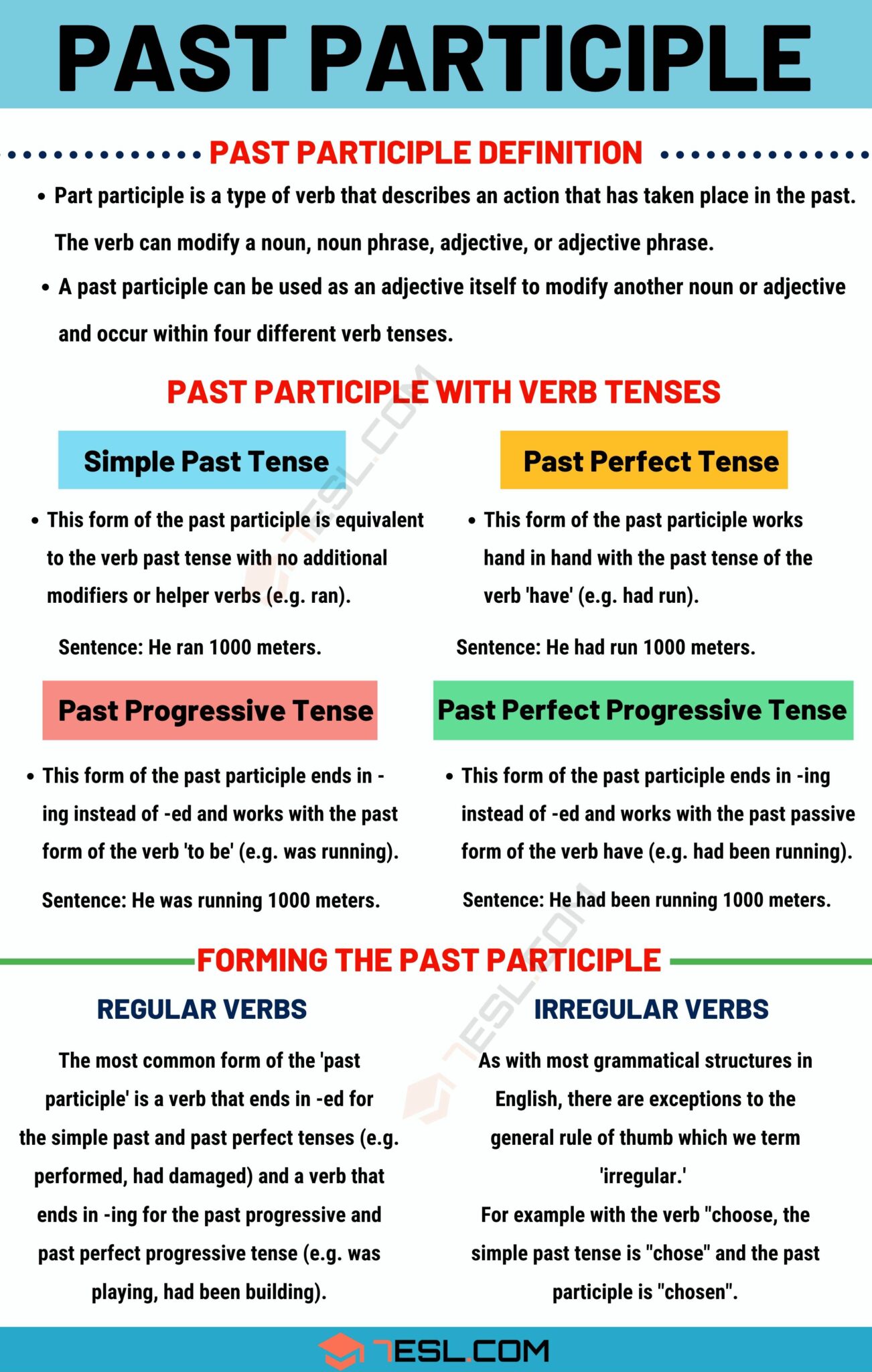 I liked it a lot.

Thanks, you did a great job.