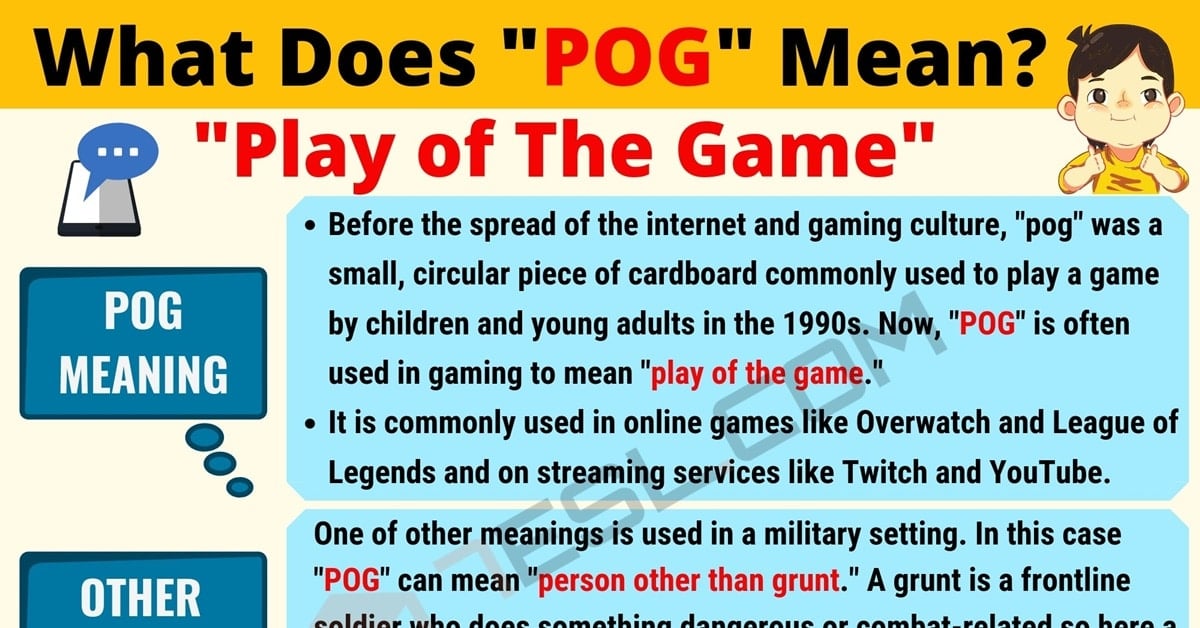 What does pog mean? If you’re an avid gamer, or just spent enough time goofing around on the web — you may have heard of the expression “pog”. According to some sources, this term is used to express excitement at epic (i.e. awesome) times. But what are the origins of the term “pog” and how exactly do you use this term correctly? This article will explore the beginnings of “pog” as a slang term, its other meanings, and some examples of the term in use.

What Does Pog Mean?

Since the PogChamp emoticon was released in 2012, the word “pog” has come to be a slang word itself, an adjective meaning “excellent“, “cool“, “remarkable“, or “awesome“.

“Pog”, in this sense, can also be used as a stand-alone interjection, essentially meaning “Cool!”. Finally, “pog” can be used as a verb, one that describes a surprised facial expression.

Before the spread of the internet and gaming culture, “pog” was a small, circular piece of cardboard commonly used to play a game by children and young adults in the 1990s. Now, “pog” is often used in gaming to mean “play of the game.”

“Pog” can also be used with “champ” to make “POGChamp.” This is sort of an abbreviation for “play of game champion.” This means that the player performed extremely well in a match and will be the best player in the game and get the “play of the game.”

The Origins of the “Pog” Slang Term

The “pog” slang term is a derivative reference from the PogChamp emoticon, essentially a thumbnail-sized picture (some 56 by 56 pixels) featured on the live streaming platform Twitch.

The PogChamp emoticon is a picture of Ryan “Gootecks” Gutierrez, an American Youtuber who has a Youtube Channel named “Cross Counter TV”. In 2010, Gutierrez and a co-host were featured in a blooper reel of the channel.

In one of the clips, when the camera jostles slightly out of place, Gutierrez makes a surprised expression, turning to his co-host. A still of this expression, zoomed-in to feature only Gutierrez’s face — was captured and added as an emoticon to Twitch in 2012.

This still picture became known as “PogChamp”, itself a reference to a 2011 video named “Pogs Championship” in which Gutierrez wins a game of Pogs. The PogChamp emoticon became synonymous on Twitch gaming live streams with “cool” game occurrences — giving birth to the slang term “pog”.

Examples of Using “Pog” in Conversations

As a verb (meaning “to make a surprised facial expression”):

Here are a few conversation examples:

For example 1, we have a young lady who streams games online. She announces her stream will be starting soon and states that she hopes to get “pog” three times in the upcoming stream. Stream Watcher 2 replies with support by using #pogchamp to say that he thinks she will be able to get the play of the game and be a champion.

The next example shows a texting conversation between two friends. They both watched the previous streamer play in her previous stream. Texter 1 thinks she did a great job. Texter 2 has doubts about how she performed. While they both agree she is a good player, Texter 2 thinks that she gets the play of the game a lot but does not have what it takes to be a great all-around player. This is something that commonly happens in gaming and e-sports where players often try to execute risky plays in order to get the play of the game. It’s an “all or nothing” style of play that can payoff but can also lose games.

Other Meanings of the Term “POG”

The word “Pog” originally comes from a juice beverage (one of Passion fruit, Orange, and Guava) that first appeared in Hawaii in 1971. A game based around Pog bottlecaps was termed “Pogs” in the early 1990s by the beverage’s company as a promotional gimmick.

By the mid-1990s, the game (known as “Pogs”) and the flat, round, cardboard pieces used in the game (collectively known also as “Pogs”, singularly known as a “Pog”) were extremely popular in the United States among schoolchildren.

The fad eventually died down, but the terms “Pog” (the gaming piece) and “Pogs” (the game/pieces) remained. The game itself dates to 1920s (or 1930s) Hawaii and is based around stacking milk bottle caps. It was not known as “Pogs” specifically until much later.

Other Meanings of “Pog”

It has a few other meanings as well. One of these is used in a military setting. In this case “pog” can mean “person other than grunt.” A grunt is a frontline soldier who does something dangerous or combat-related so here a “pog” is someone who performs some supporting duties but does not really fight or march like the others. 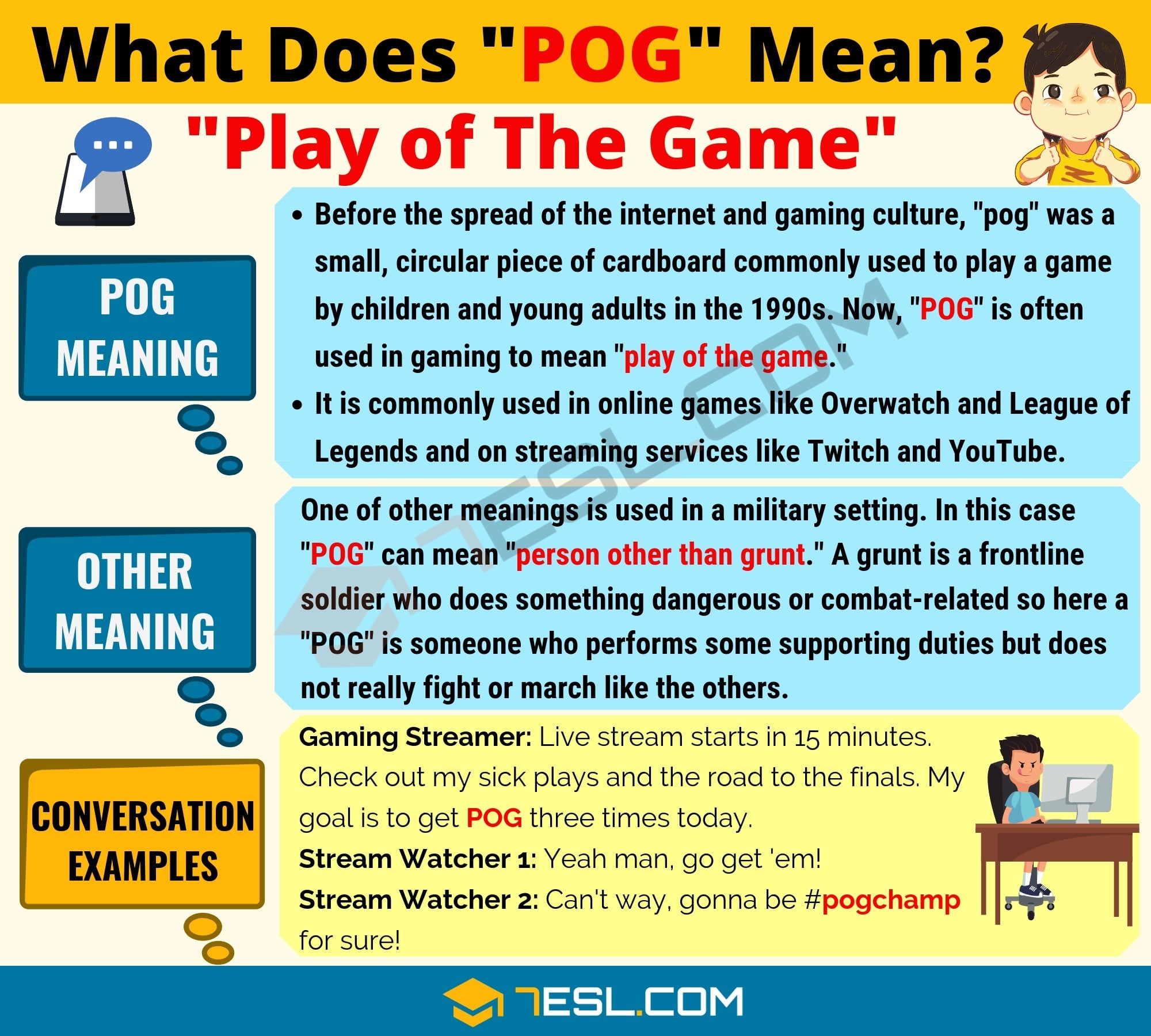 Other Ways to Say ‘POG”

This is not what it means at all

what does it mean im so lost

Pog is just a twitch emote

POG is from a game (also called milk caps) that was popular in the 1990’s. The name POG comes from the the bottles
of juice, Passionfruit, Orange, Guava (POG), that were originally used. POG became known on twitch because of POGchamp
which is from a 2011 video by Ryan Gutierrez (Gootecks) where he was playing POG and became the “champion”.

this is its official meaning although it is used in a different way. In the way it is usually used is more of a context like that is really cool but Pog is substitued for cool here.

This is completely wrong, POG is just the name of a famous twitch emote. A person with an amazed expression.

knowyourmeme say that the name of the twitch emote come from the abbreviation of “Play Of the Game”.

Thats not true either, its from a discussion with a videogame creator who made a face during the interview talking about a game called something with the word pog in it, i forget the full name

POG is from a game (also called milk caps) that was popular in the 1990’s. The name POG comes from the the bottles of juice, (Passionfruit, Orange, Guava), that were originally used. POG became known on twitch because of POGchamp which is from a 2011 video by Ryan Gutierrez (Gootecks) where he was playing POG and became the “champion”.

pog is a picture of gootecks

POTG is play of the game

POG is from a game (also called milk caps) that was popular in the 1990’s. The name POG comes from the the bottles of juice, (Passionfruit, Orange, Guava), that were originally used. POG became known on twitch because of POGchamp which is from a 2011 video by Ryan Gutierrez (Gootecks) where he was playing POG and became the “champion”.