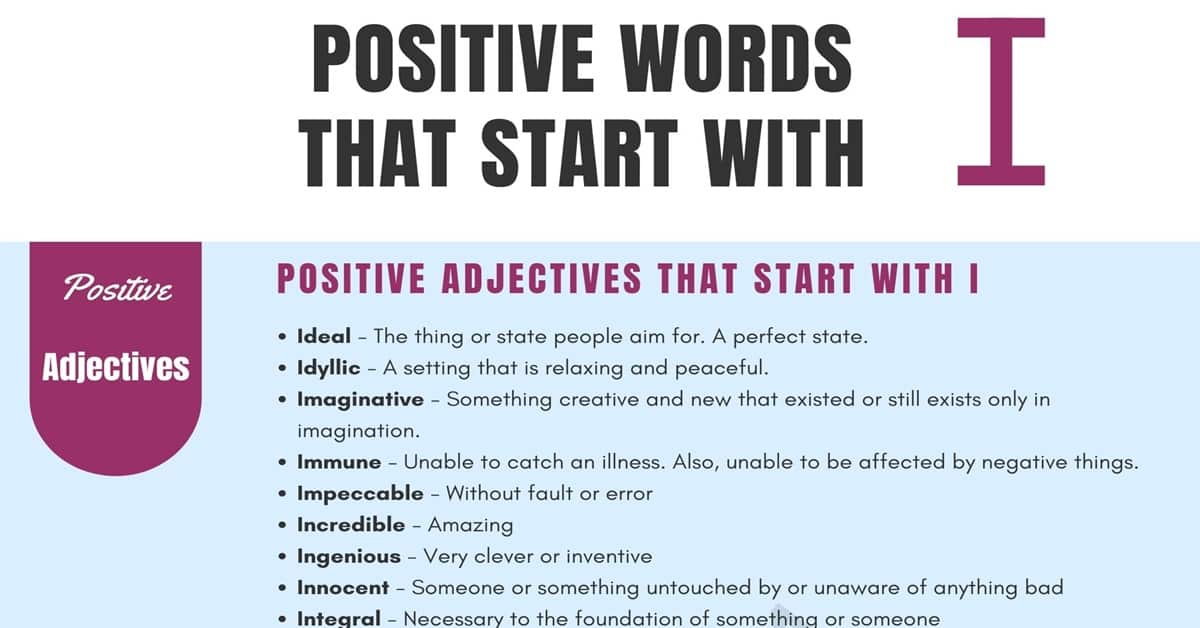 What are positive words that start with I? Positive words can be a fantastic way to increase your own positivity, as well as the positivity of those around you. They’re also a great way to make yourself look better for job applications and for other situations where you want someone to come away with an actively positive impression.

If you need any help finding the right positive word to use, you’re in luck! The following is a list of positive words that start with I. The words are sorted by what part of speech they are, including adjectives, verbs, and nouns. They’re also alphabetical for quick reference, and they include a brief definition.

Positive Words that Start with I

Positive Adjectives that Start with I

Adjectives are words that describe or modify a person, place, or thing. Positive adjectives are great for creating positive descriptions!

The thing or state people aim for. A perfect state.

She’s the ideal candidate for the job.

A setting that is relaxing and peaceful.

If you want old-world tradition in an idyllic setting, this is the hotel for you.

Something creative and new that existed or still exists only in imagination.

She was an imaginative and innovative manager.

Unable to catch an illness. Also, unable to be affected by negative things.

The immune system is our body’s shield against infection.

Without fault or error

He was dressed in a suit and an impeccable white shirt.

His face was a study as he listened to their amazing news.

Your invention is ingenious, but not very practical.

Someone or something untouched by or unaware of anything bad

Nobody would believe that I was innocent.

Necessary to the foundation of something or someone

Music is an integral part of the school’s curriculum.

To be without reproach, or without anything, someone could complain about or scold you for.

It may be a rather indigestible meal for some, but the performances that Gray elicits are irreproachable.

Positive Verbs that Start with I

Verbs are action words. They tell what the subject is doing. Using a positive verb makes the sentence do positive things!

To make a picture to go with words or an idea. Sometimes figurative, such as illustrating the benefits of a plan by painting a mental image.

The speaker said he would endeavor to illustrate.

To put quality into someone or something, typically positive.

He managed to imbue his employees with team spirit.

To make it so a person or animal is safe from a communicable disease.

There is still no vaccine to immunize people against the virus.

To communicate or make something known. Often, “to impart wisdom.”

I am about to impart knowledge to you that you will never forget.

To pleasantly surprise somebody, often with skill or behavior.

You can try your best to impress the interviewers but in the end, it’s often just a question of luck.

To make or cause more of

To start something. Sometimes used for a person starting with a new group or routine.

A language teacher should initiate pupils into the elements of grammar.

To fill someone with desire, hope, optimism, or motivation.

I hope this success will inspire you to greater efforts.

I will instruct my solicitor to proceed with the preparation of draft contracts.

To ask someone to join

She waited for him to invite her to dance, not wishing to seem bold.

Positive Nouns that Start with I

Nouns are people, places, or things. A positive noun means the focus of your sentence is positive, too!

A new or proposed thought or suggestion

I don’t have any idea what’s going on.

A person others look up to. Also, someone famous.

Fans waited for hours at the airport to catch a glimpse of their idol.

The process of the mind that thinks about new or creative things.

Don’t let your imagination run away with you.

The process of getting better

There is still room for improvement in your work.

The drive to get started on something. Often comes from within.

The process of making things better, sometimes with drastic changes.

We need to encourage innovation in the industry.

There has been a big input of resources into the project from the industry.

Being honest and truthful without needing to have consequences threatened

Separatist movements are a threat to the integrity of the nation.

Wanting to know more about a thing or person

She found it difficult to sustain the children’s interest.

This new invention will bring you great profits like a goldmine.

I hope this list of positive words that start with I was informational, interesting, and inspiring! Refer to it as often as you’d like!

Positive Words that Start with I | Picture

Positive Words that Start with I in English 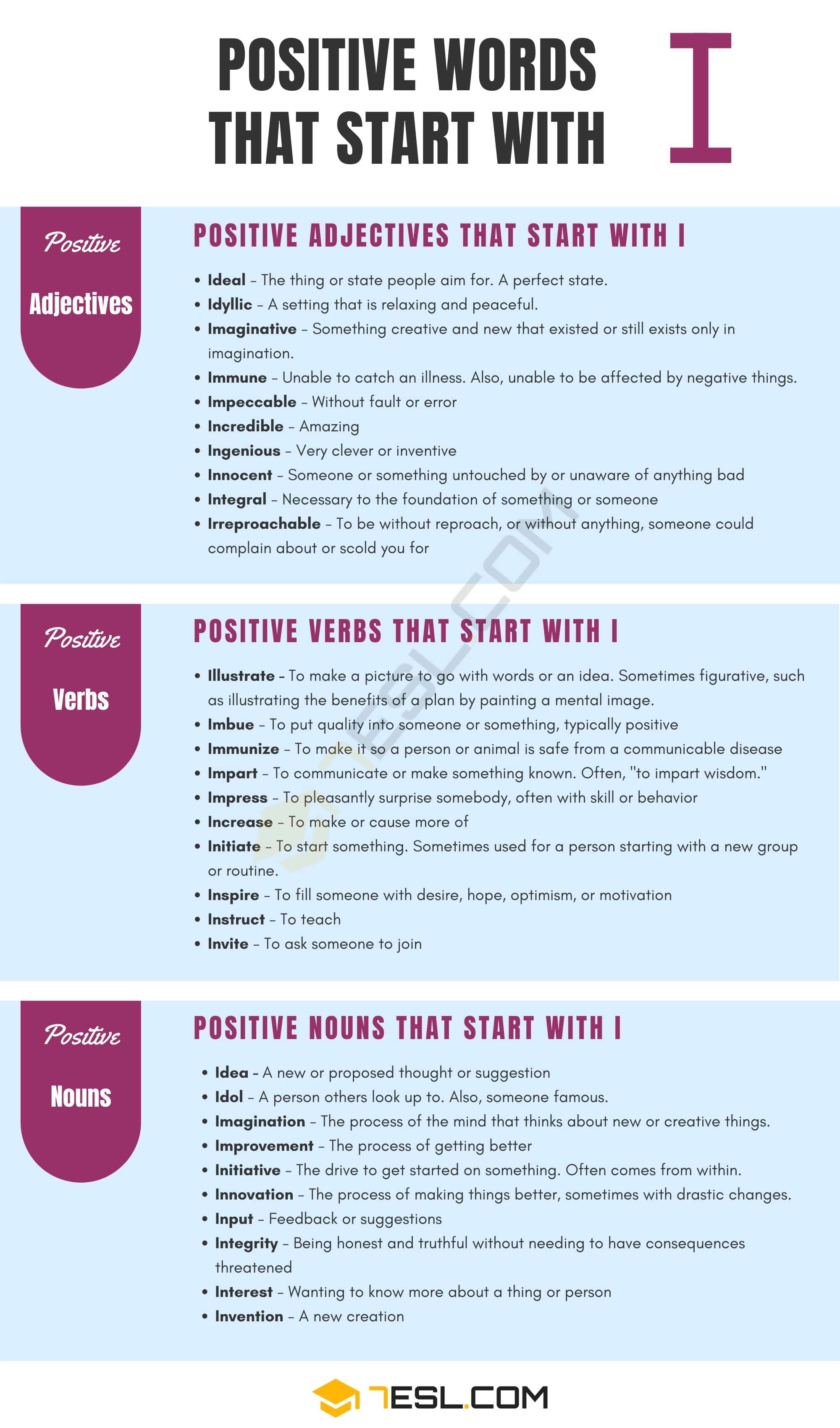 you lie a lot don’t you

everybody asks what da dog doin not how the dog doin 😔😔😔😔

what the dog doin