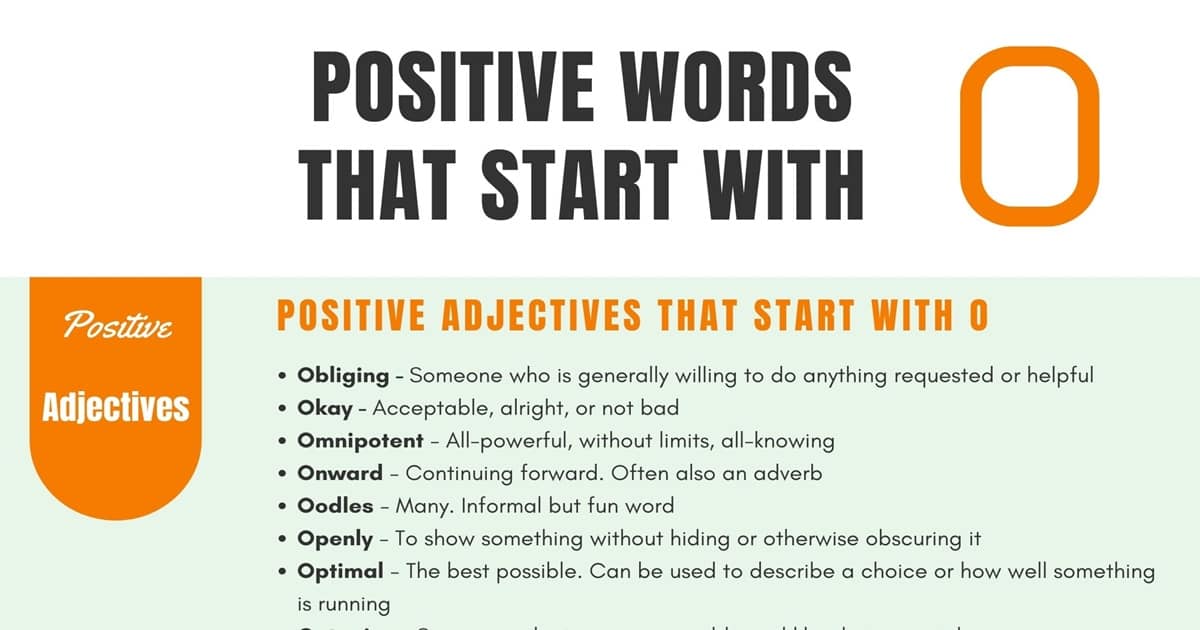 Often, it’s difficult to find just the right word to use. Luckily, we’re here for you with a list of positive words that start with O! To make things even a little more optimal, these words are sorted into categories according to whether they are adjectives, verbs, or nouns. They’re also alphabetized in each section, and they each include a common or applicable definition or two!

Positive Words that Start with O

Positive Adjectives that Start with O

Adjectives are words that describe a person, place, or thing. Positive adjectives are great at giving a sentence a positive slant!

Someone who is generally willing to do anything requested or helpful

He found an obliging doctor who gave him the drugs he needed.

Acceptable, alright, or not bad

That’s okay. Don’t worry about it.

Money is not omnipotent, but we can’t survive without money.

His life has a sense of purposive onward movement.

Many. Informal but fun word

The recipe calls for oodles of melted chocolate.

To show something without hiding or otherwise obscuring it

He stated his own views quite openly.

The best possible. Can be used to describe a choice or how well something is running

To make the optimal decision, I visually scan as many as possible of the various alternatives.

Someone who is very personable and likes being social

We’re looking for someone with an outgoing personality.

Clearly laid out or defined plans or shapes

The development and principle of the FPS system is outlined.

Her outstanding performances set a new benchmark for singers throughout the world.

Positive Verbs that Start with O

Verbs are action words. A positive verb really makes a sentence do something positive!

To watch. Often to make sure everything stays good

Astronomers were able to observe a galaxy still in the process of formation.

To get or acquire

The police are trying to obtain a more accurate picture of crime levels.

An explosion will probably occur at any minute.

To present somebody with an option

Can I offer you something to drink?

You must use force to open that bottle.

To choose to do something

You can opt to pay a flat rate for unlimited Internet access.

To put things into order for cleanliness or easy access

To be the start of something

Many of our foods originate from tropical forest species such as rice, cocoa, fruit, maize, and coffee.

To last longer than competition or goals

He can outlast anyone on the dance floor.

To conquer or surpass challenges or limits

We can and must overcome our shortcomings.

Positive Nouns that Start with O

Nouns are people, places, and things. A positive noun gives your sentence something positive to talk about!

An area of water and/or growth surrounded by desert. Also used figuratively for a good place or time when there has been a lot of bad

Playing with him was like being on an oasis in the desert.

A celebration or event

I put on my Sunday best for the occasion.

It is an ode to friendship along the ancient Silk Road.

The ointment is available from pharmacies without a prescription.

A little effort and push when you’re doing something

You need to put some oomph into your acting.

A chance for something, usually to do something good or noteworthy or exciting

Today is an opportunity to get better. Don’t waste it.

Students have the option of studying abroad in their second year.

The thieves replaced the original painting with a copy.

A view of the future, often positive. Even the less positive outlooks can help you plan, which makes them positive!

The outlook for the weekend is dry and sunny.

Applause in recognition of good work

He received a standing ovation from the entire chamber.

Obviously, we’re overly optimistic and offer the option to review this list of positive words that start with O whenever the opportunity presents!

Positive Words that Start with O with Meaning

Thanks it is super helpful! 😃🥳