Prepositions of Place! A preposition can provide us with information on the relationship between two words within a sentence, one such relationship is the placement of an object. For example, ‘the dog was in front of the window.’ This shows where the dog is and allows us to understand what is being talked about more clearly.

In this section, we are going to show you a detailed list of prepositions of place which will add to your vocabulary as well as giving yo the ability to create more detailed sentences and sound more fluent.

Learn the list of prepositions of place in English with useful grammar rules, examples, video lesson and ESL printable worksheets.

What is a Preposition of Place?

A preposition of place is a preposition which is used to refer to a place where something or someone is located.

Learn useful list of prepositions of place in English with meaning and example sentences.

At or to a higher place or position than something/somebody

Our friends in the apartment above us are really noisy.

One follows the other

He ran after her with the book.

Near or at the side of

The telephone is by the window.

Under someone or something

Jaime hid the letter beneath a pile of papers.

At the side of someone or something

We lay beside the pool to dry off in the sun.

The hotel is situated next to the lively bustling port.

There is a bush near the school playground.

The new shopping center is close to the railway station.

Something in or through the space that separates two things, objects, or places

There is a gulf between the two cities.

In the middle of or surrounded by other people or things

The girl quickly disappeared among the crowd.

Farther forward than someone or something else

They massed in front of the city hall.

At or towards the back of a thing or person

The horse fell behind in the race.

The shoe store is across from the bank.

Below or at a lower level than something, or covered by something

We slept under the open sky.

In a lower place or position than something else

He dived below the surface of the water.

Above or higher than something, without touching it

On something or covering it

She held the umbrella over both of us. 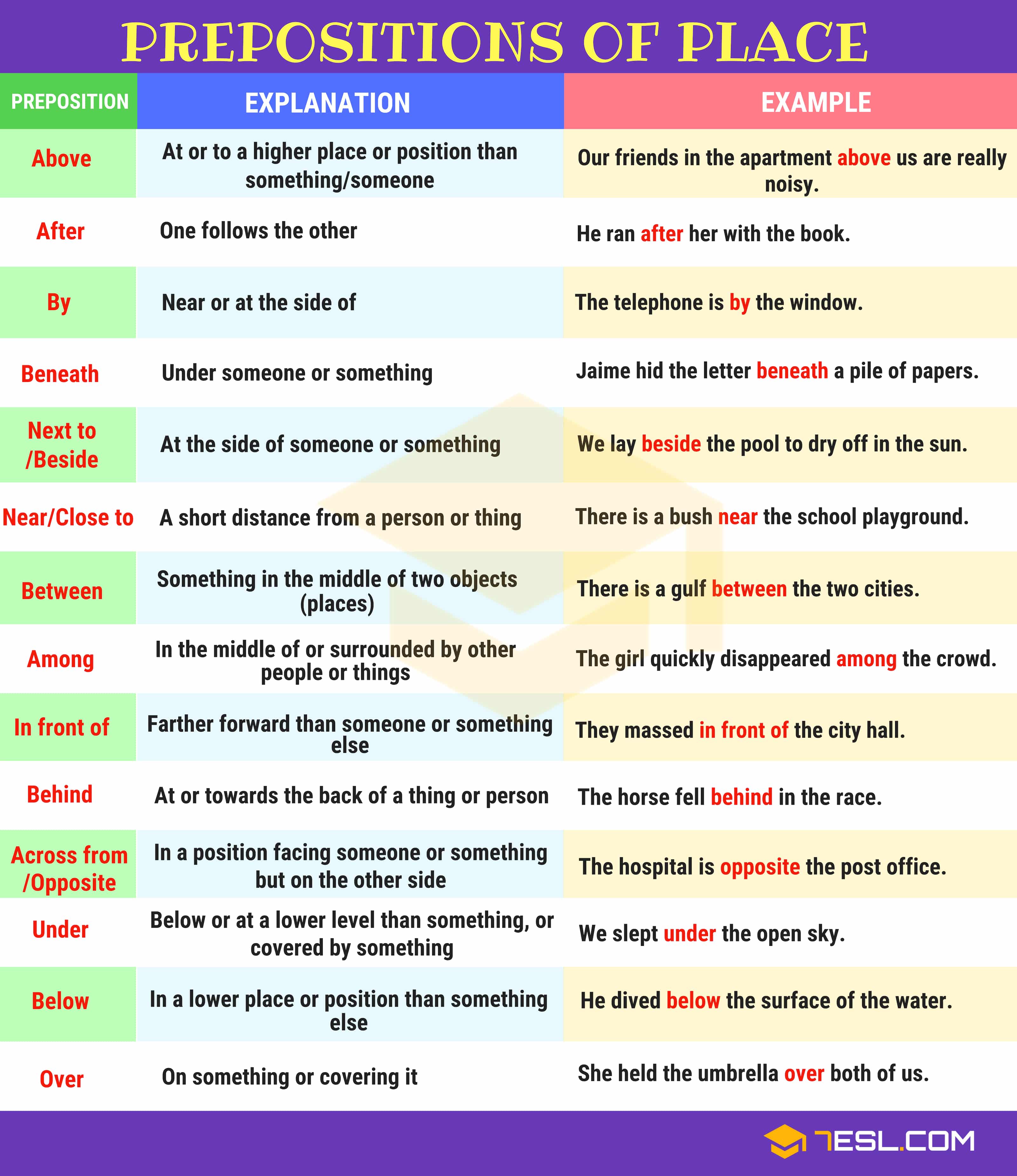 Prepositions of Place IN ON AT

In order to describe place, the prepositions at, on, and in go from GENERAL to SPECIFIC.

Prepositions of Place: IN

For describing place, the preposition IN is used for the largest or most general places. You can say that “I lived in London as a child.” And “He’s a very famous person in Chinatown.”

In a traffic jam

Prepositions of Place: IN | Picture 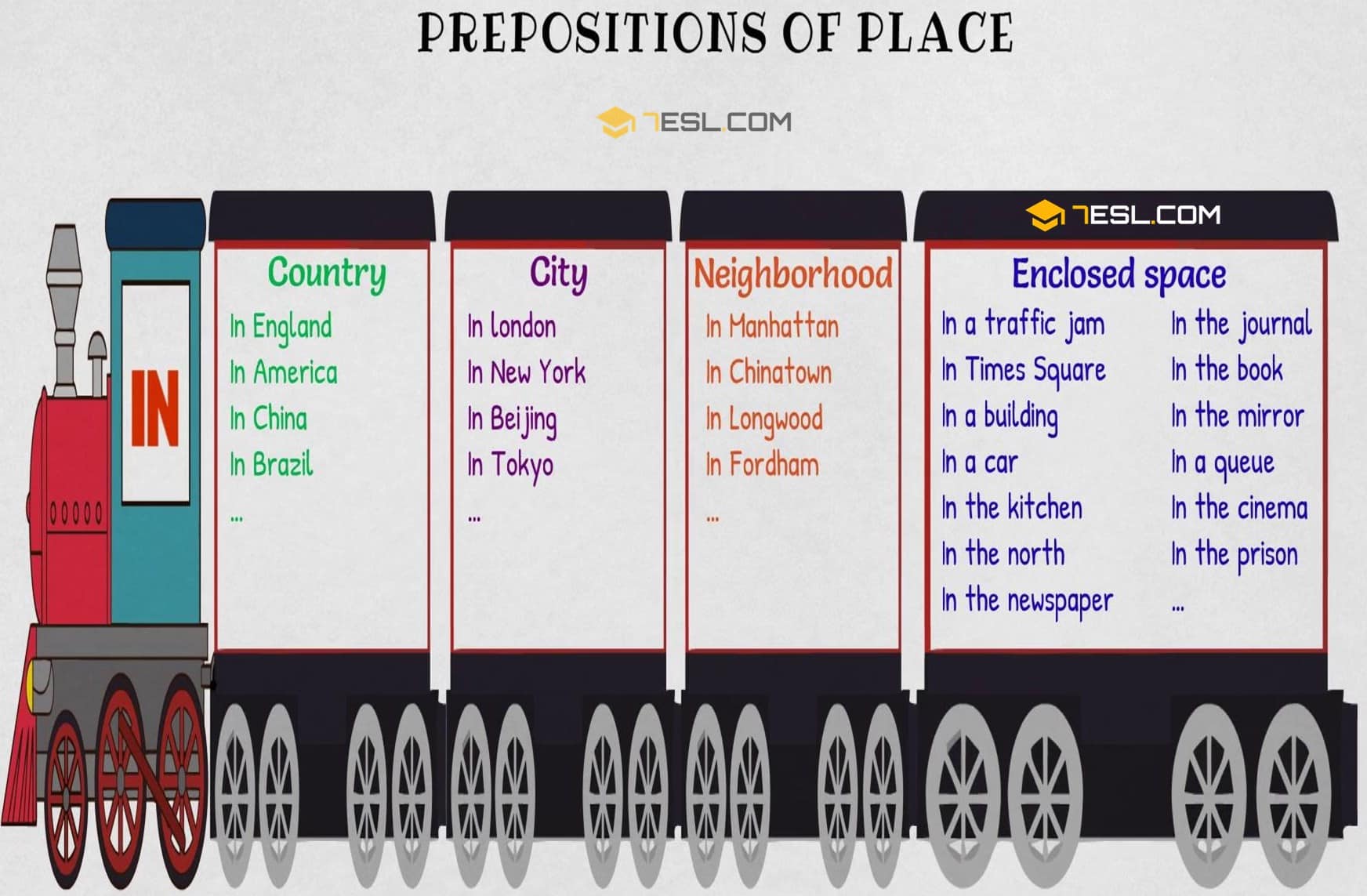 Prepositions of Place: ON

The preposition ON is used for more specific places, like certain streets. You can say that “He took a northbound trolley on State Street.”

On + Means of transport

Prepositions of Place: ON | Picture 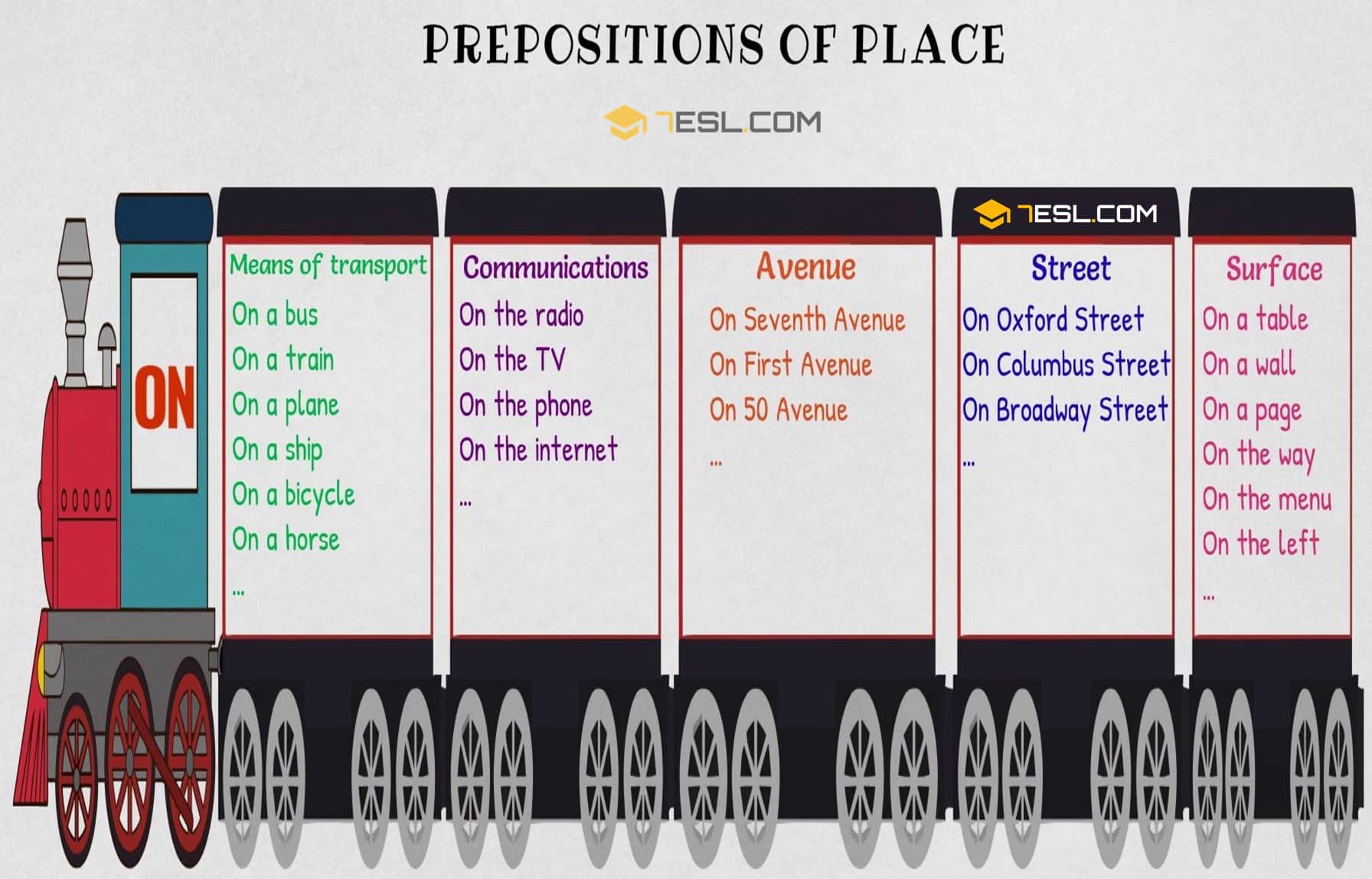 Prepositions of Place: AT

At + Exact Addresses or Intersections

At The Empire State Building

At the bus stop

Prepositions of Place: AT | Picture 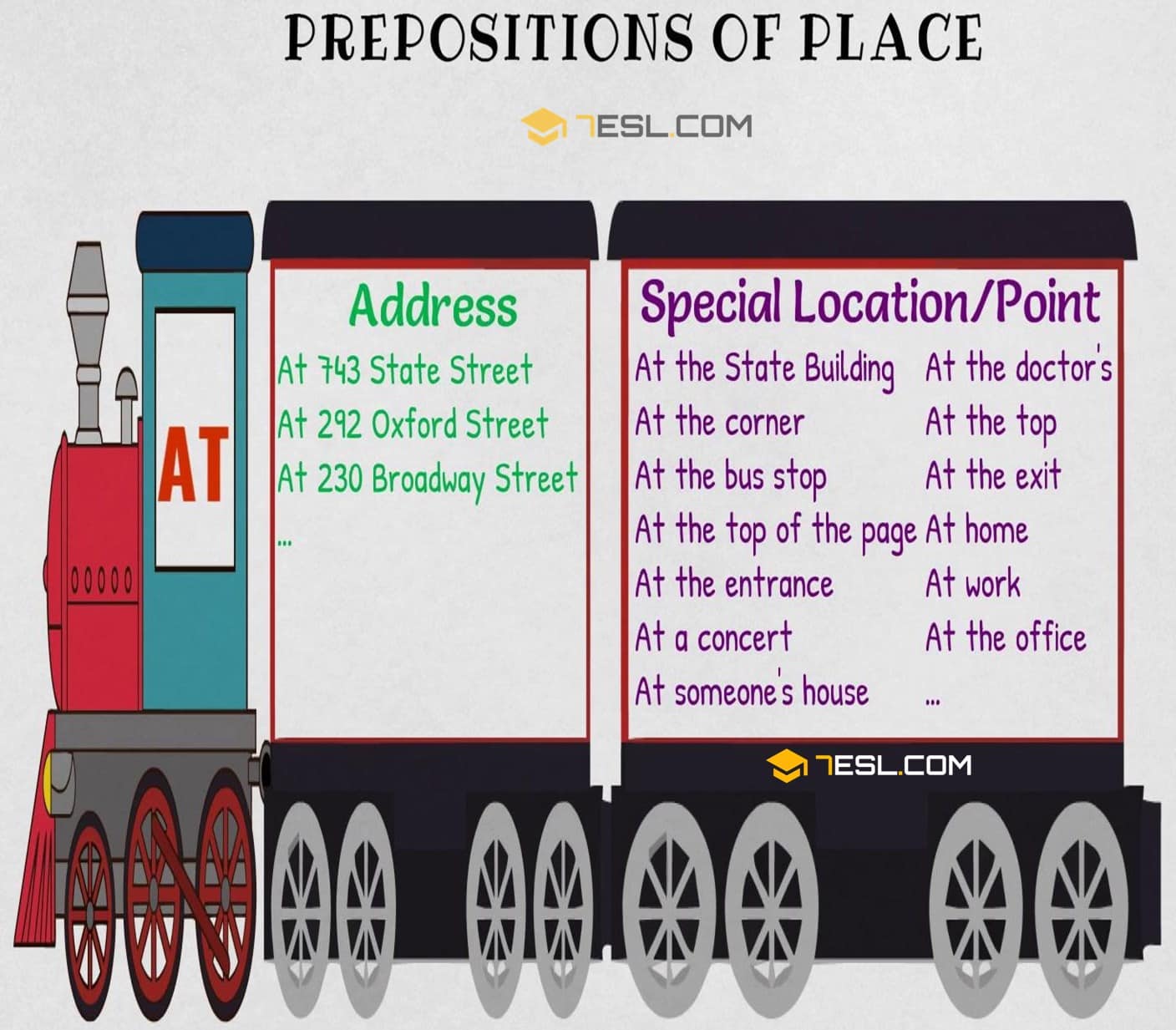 Prepositions of Place IN ON AT Images 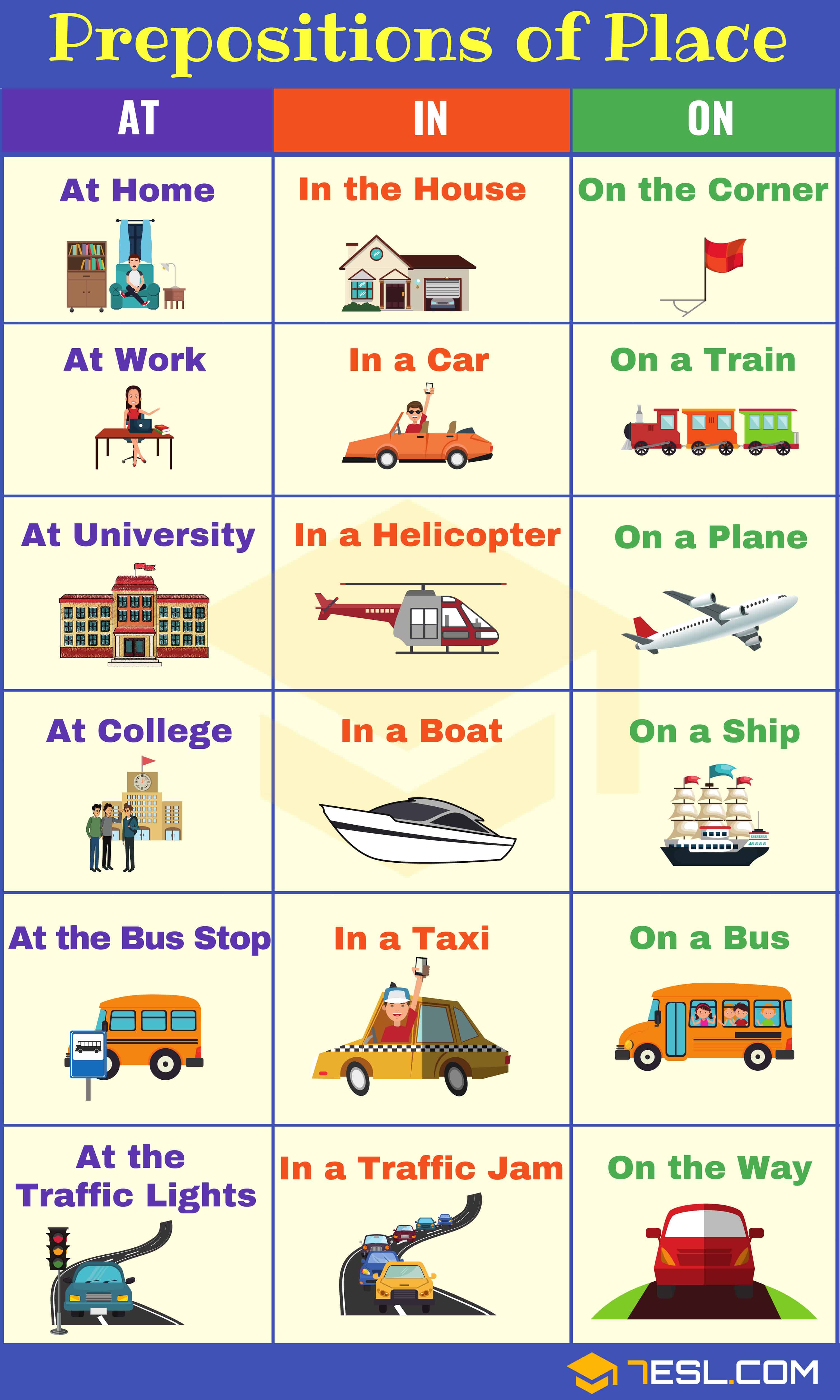 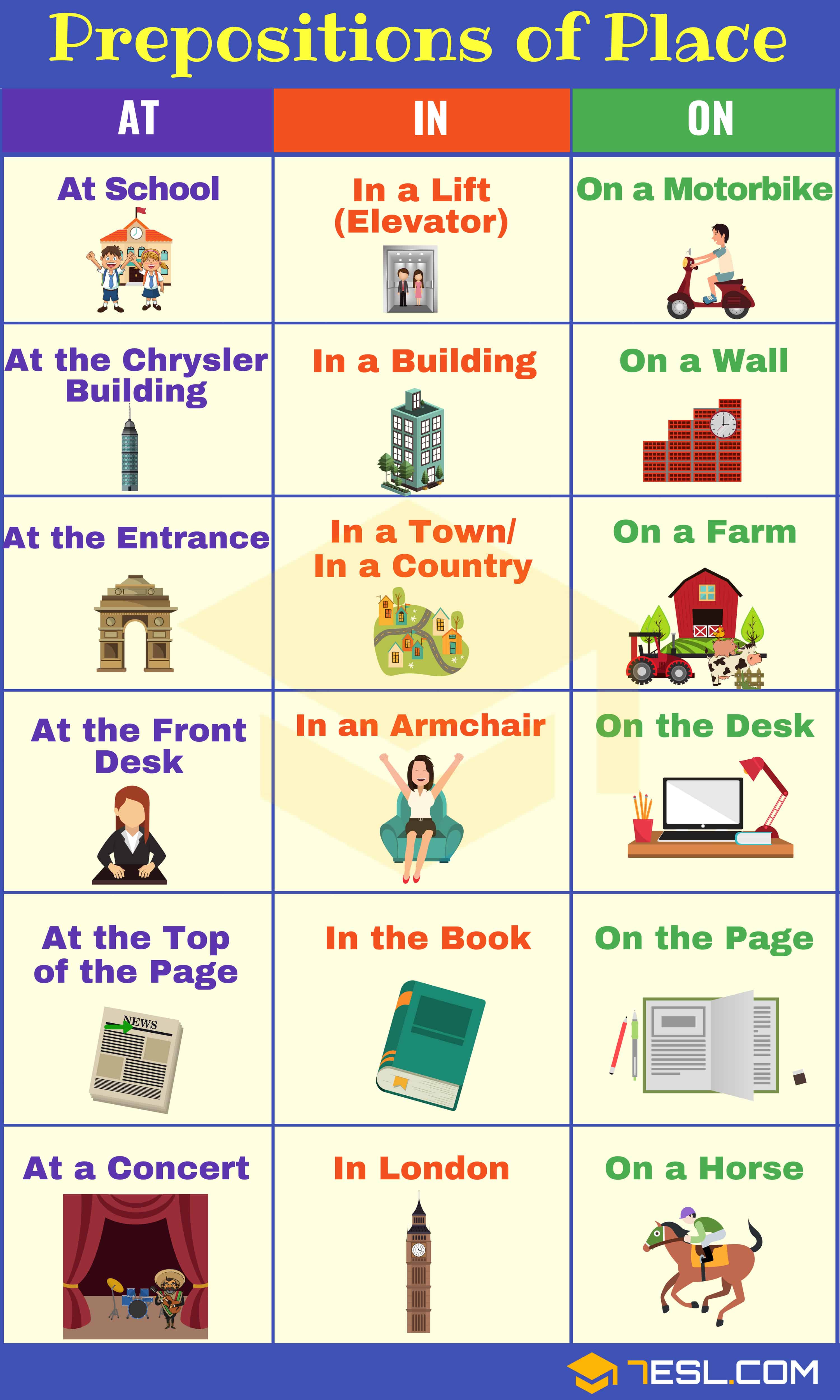 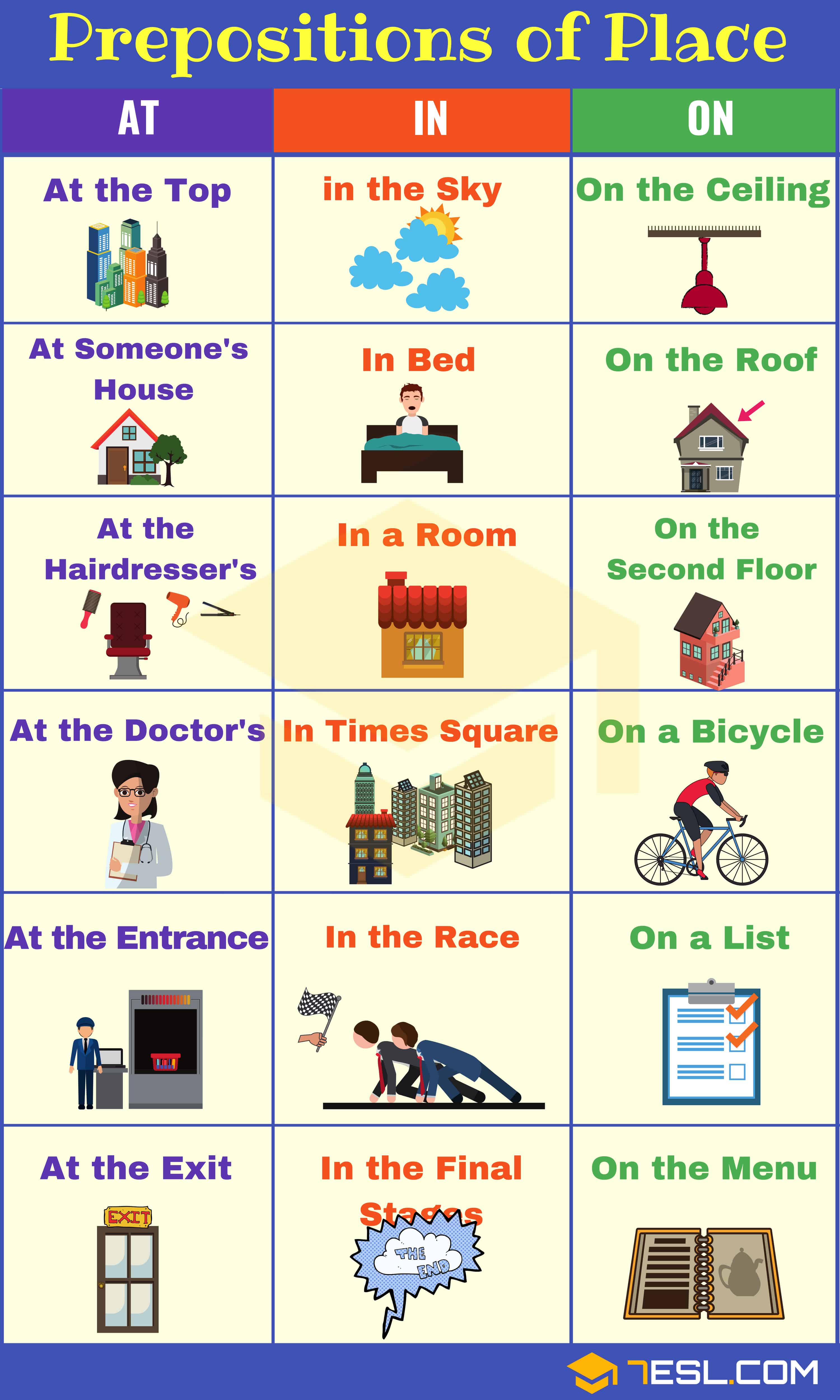 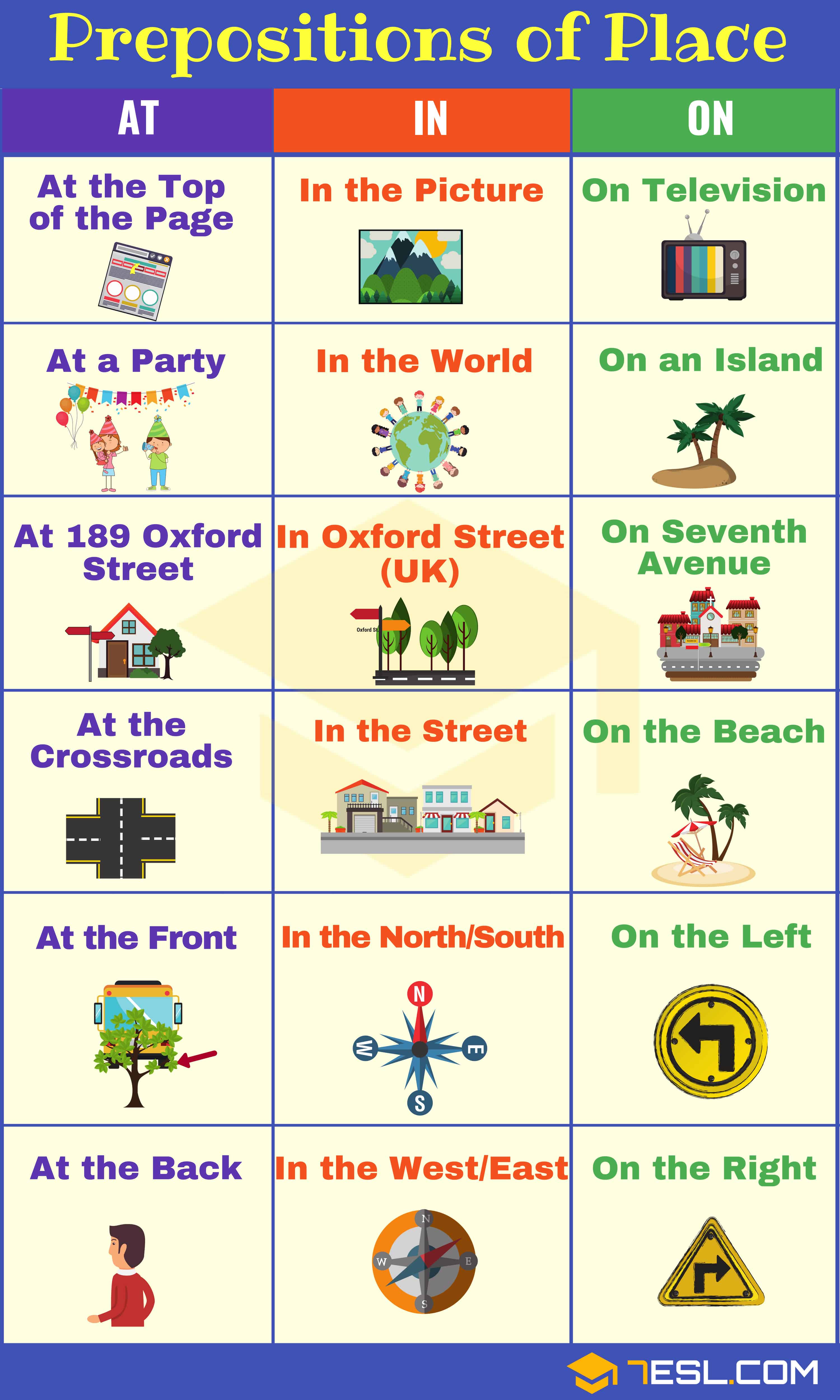 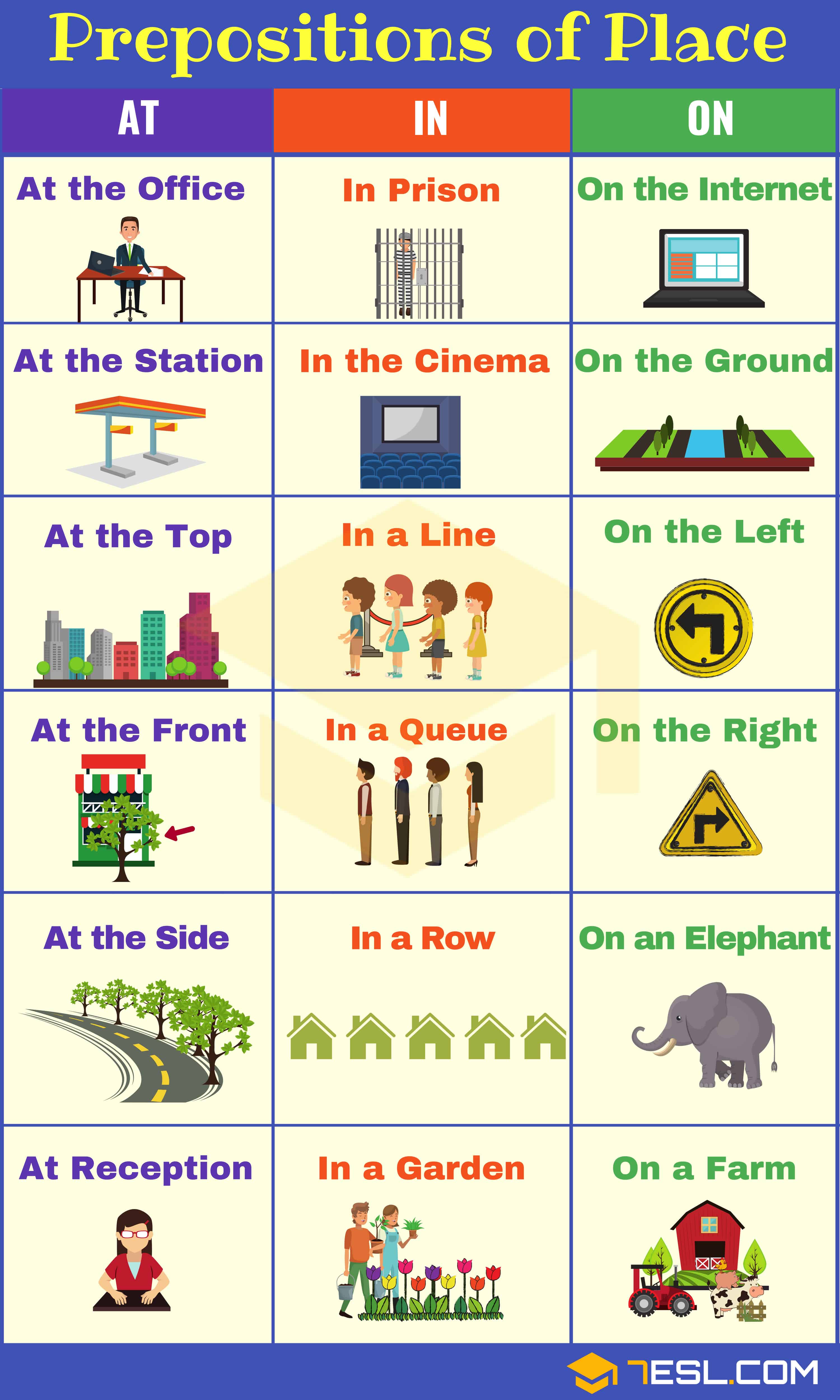 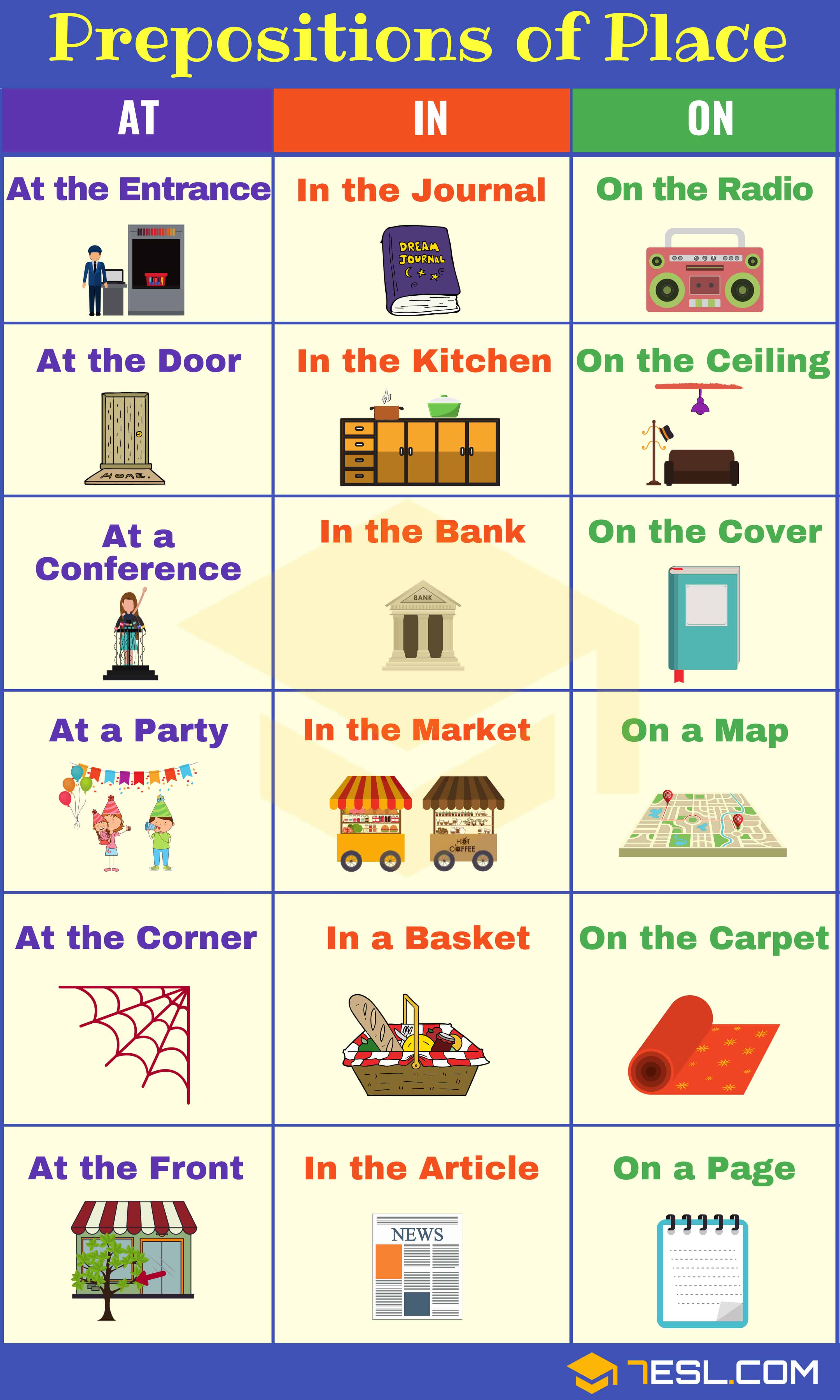 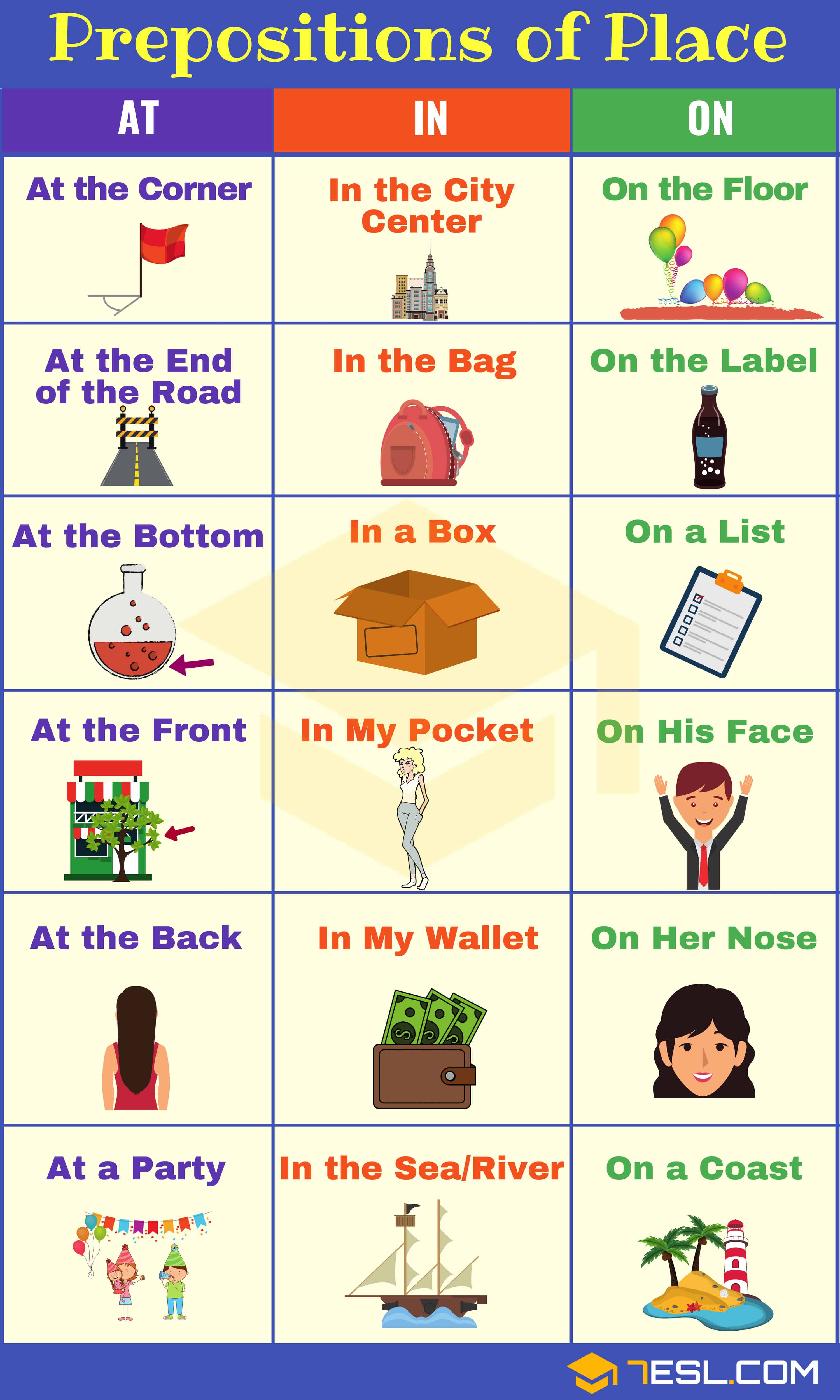 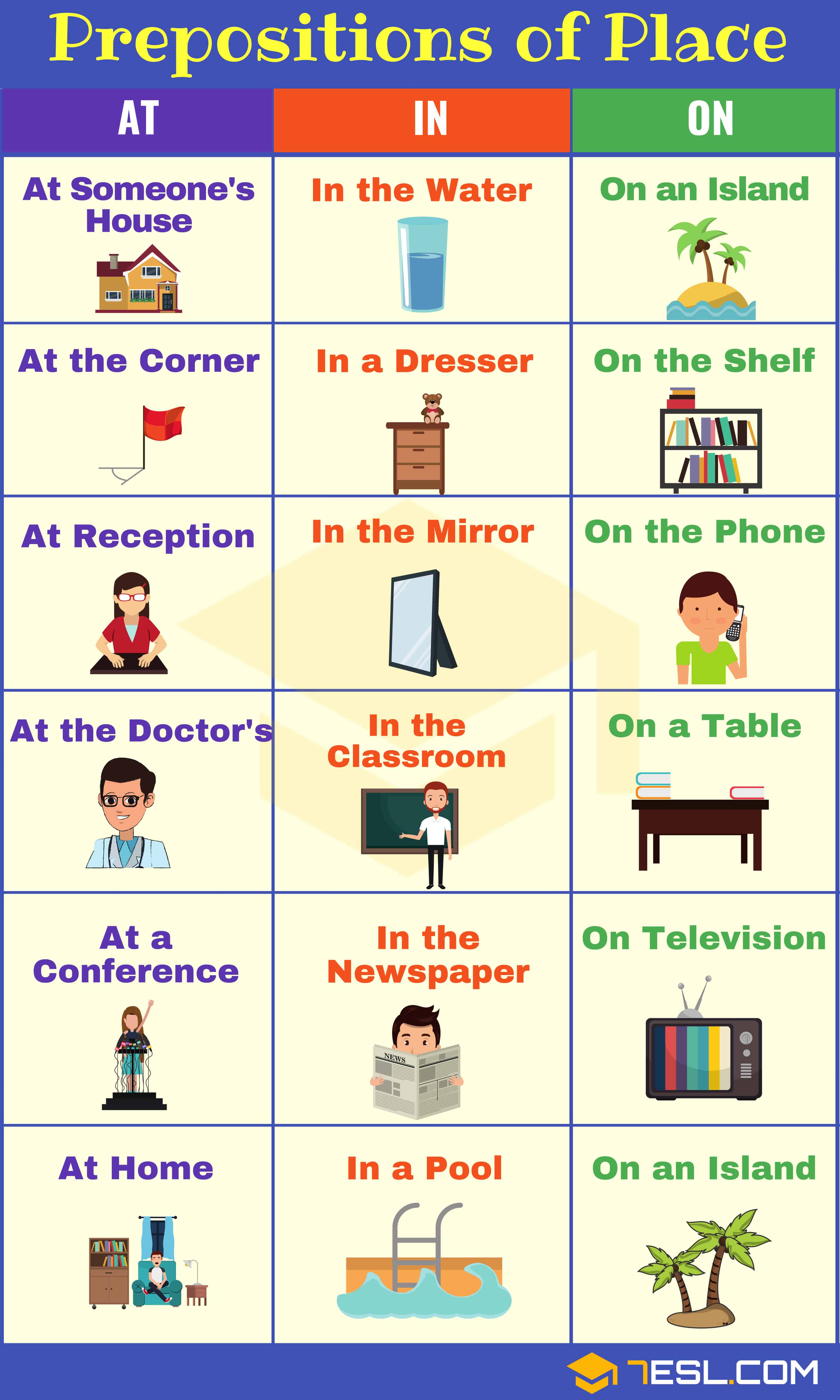