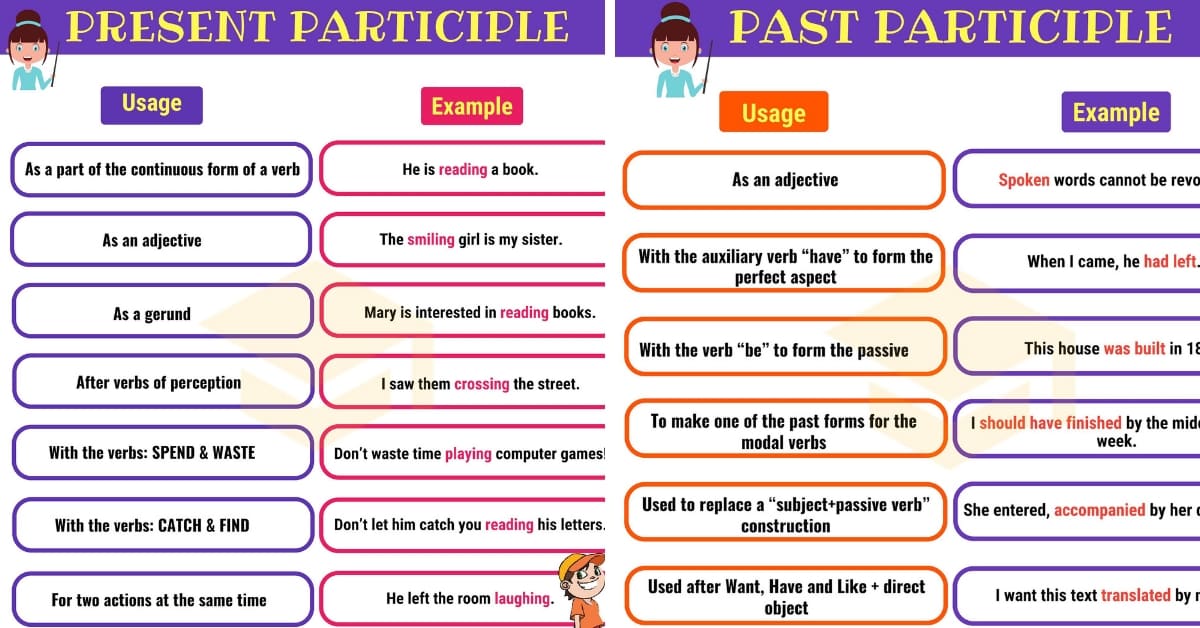 Participles! What is a participle? Learn participle definition and how to use Present Participle and Past Participle in English with examples and ESL worksheets.

What is a Participle?

What is a participle? A participle is a verbal that is used as an adjective and most often ends in -ing or -ed. They function as adjectives, thus participles modify nouns or pronouns.

There are two participles: The present participle and the past participle. They can both be used as adjectives.

The smiling girl is my sister.

The past participles of all regular verbs end in -ed. For example:

Harry has worked in this company for 5 years

Irregular verbs, however, have various past participle endings – for instance, thrown, ridden, built, and gone

Present participle, always ending in -ing, is created from the form of a verb used with the verb to be (am, is, are, was, were, been) as an auxiliary verb (progressive tense).

The Present participle is used:

They are playing football at the moment.

He is reading a book.

The smiling girl is my sister.

I saw them crossing the street.

I could hear them playing in the garden.

I’ve spent the whole weekend revising for my exam.

(With catch, the participle always refers to an action which causes annoyance or anger. This is not the case with find, which is unemotional.)

Don’t let him catch you reading his letters.

I found him sitting on a park bench reading a book.

He left the room laughing. 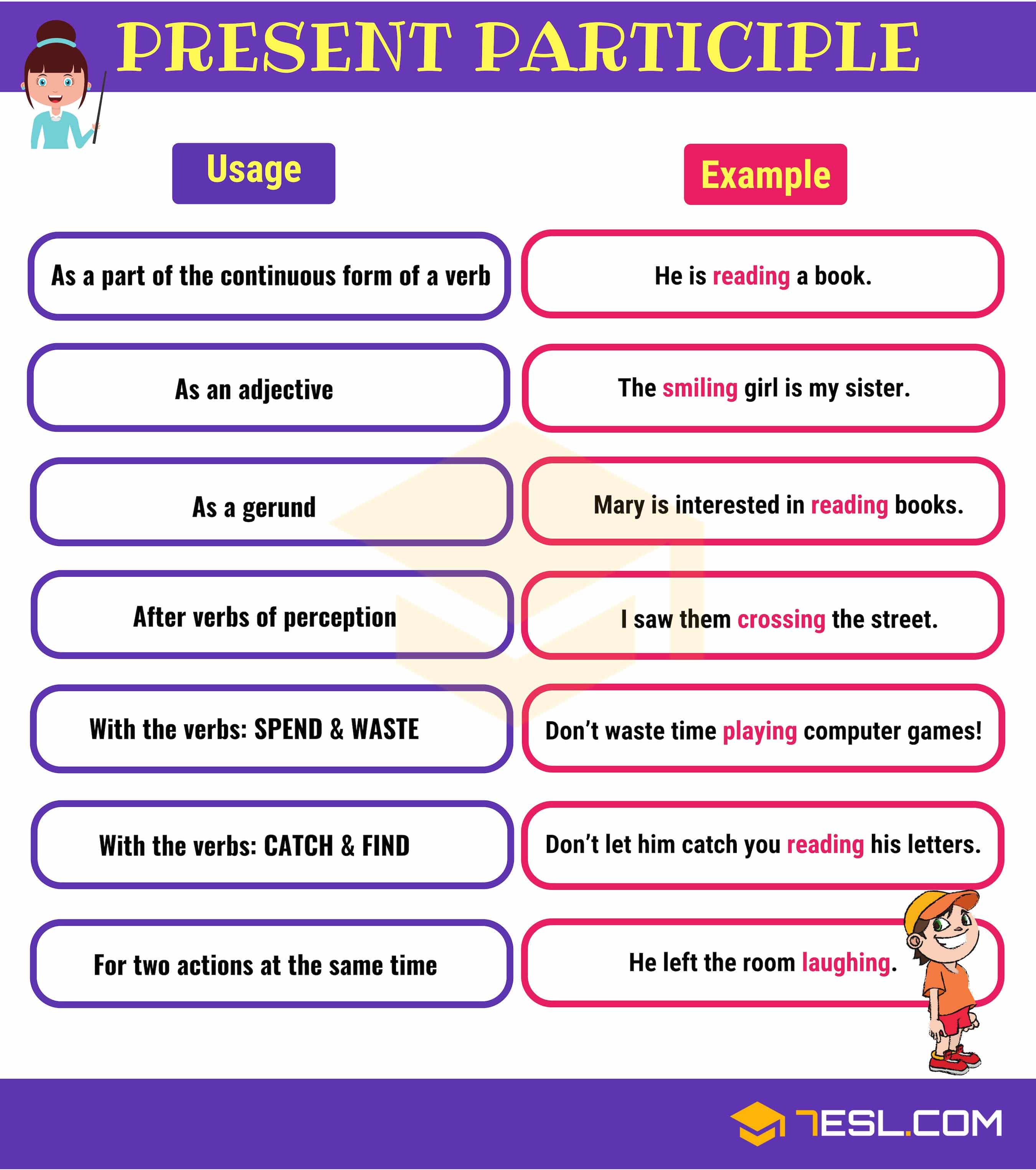 The Past Participle is used:

Harry has worked in this company for 5 years.

When I came, he had left.

The book was given to me.

The police could have charged them with threatening behaviour.

I should have finished by the middle of the week.

She entered, accompanied by her daughters.

I want this text translated by noon.

He made his presence felt. 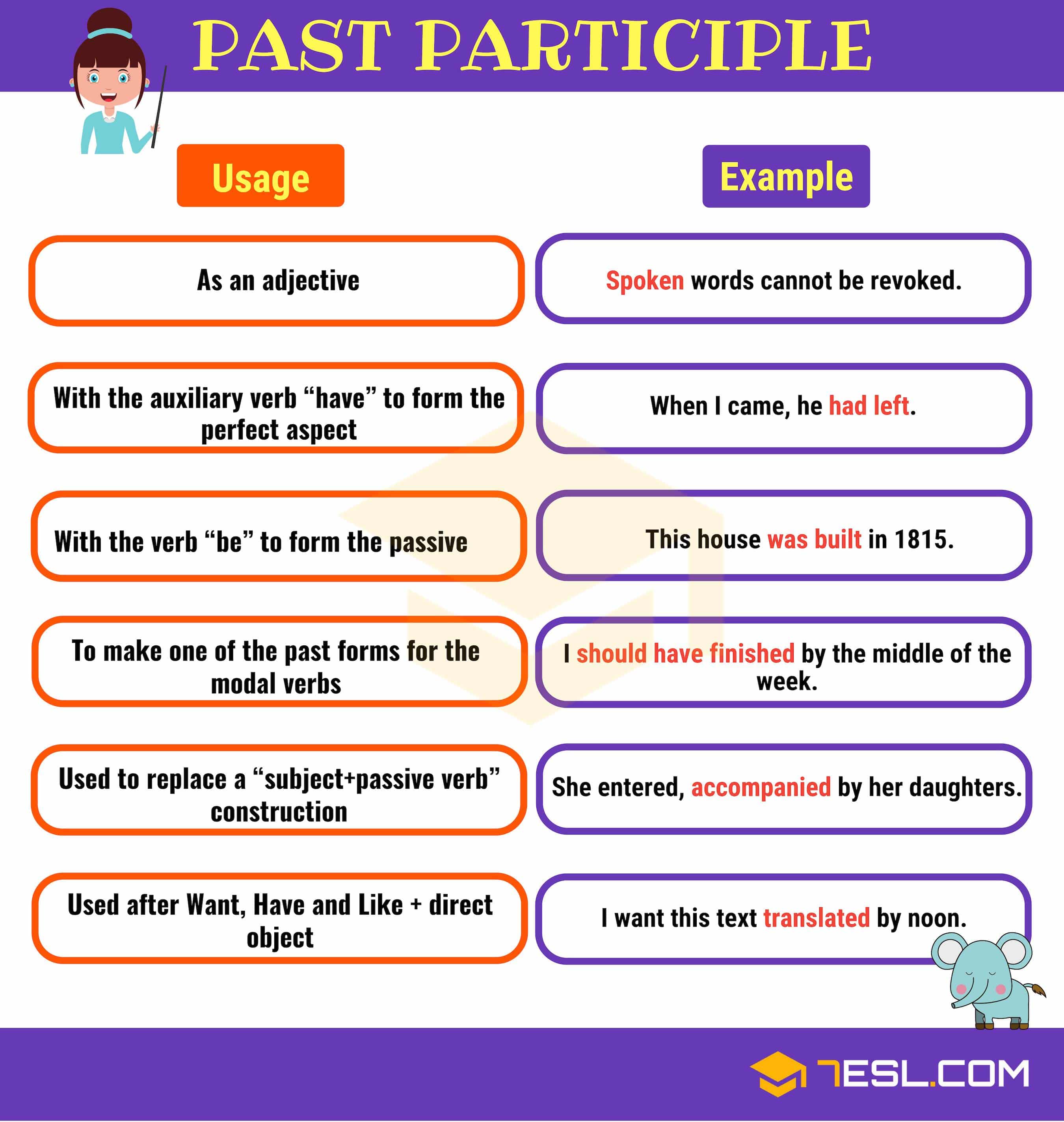 He found the house burning.

The past participle has a passive meaning:

He found the house burned.

The past participle is active in such examples:

The past participle is used to replace constructions of the type “subject+passive verb”:

The present participle is used if the absolute phrase is active:

The weather being fine, nobody wanted to stay at home.

The past participle is used if the absolute construction is passive:

All things considered,/This done, I think we should start immediately.

Thanks so much.
It is so useful