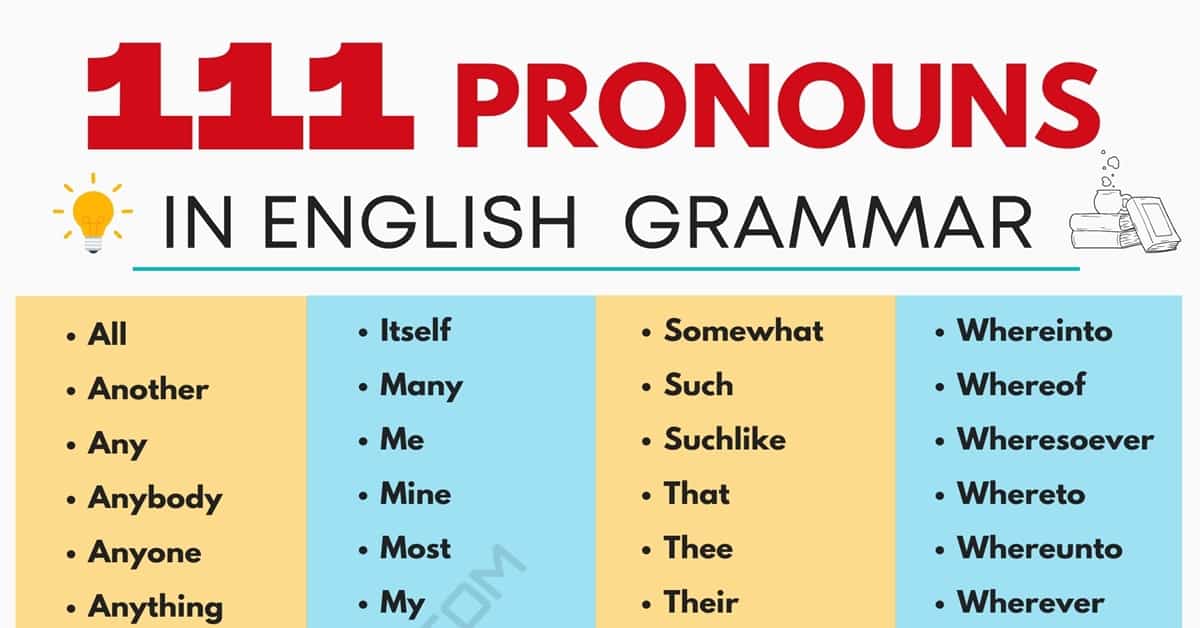 Many pronouns exist in the English language. Each pronoun category utilizes them in different ways. Find detailed pronouns list below for each subgroup of pronouns.

Types of Pronouns with Examples

What is a pronoun?

Pronouns substitute nouns in a sentence. It becomes repetitive to repeat the same noun throughout a text. To add variation to your writing you can employ pronouns to replace a specific noun. When writing a short story about your mom you don’t want to use the word mom in every sentence. Substituting a pronoun like “she” for “mom” can make your writing sound more diverse.

Only using a noun

Repetitive writing like this distracts readers from your tale. A story becomes exhausting to read when the same word finds purchase in every sentence. To fix this you can use pronouns like “she” and “her” as replacements for the word “mom”.

Using pronouns to diversify your key noun lets the words in your story flow better. It makes your content more readable.

What are the interrogative pronouns?

What are the personal pronouns?

Pronouns serve many functions. You can use the pronoun “it” to replace a myriad of things. For example, “it” could replace love, a bat, or the moon.

You can replace antecedents with a pronoun. Antecedents are nouns or noun phrases that you can find at the start of a sentence. The examples below italicize the antecedent and bold the replacing pronoun.

In some instances, you do not have to state the antecedents explicitly. When the context is clear you do have to state it. When someone is speaking you usually understand who the pronouns “I”, “me”, and “you” regard.

You can introduce a pronoun before stating the antecedent; however, in complex sentences doing so could result in confusion.

Relative pronouns link relative clauses to independent clauses. Some people refer to this class of pronouns as adjective pronouns. They get this nickname because they act like adjectives by describing nouns.

A relative clause is a type of dependent clause. You can use it to include extra details about something specific found in a sentence. Words like “what”, “who”, “which”, “whom”, and “that” are relative pronouns.

The relative pronoun “who” refers to human beings. In contrast, you describe animals/things as “that”.

If the introduced clause is nonrestrictive you need a comma. Nonrestrictive clauses act as an aside or more aptly like parenthesis. The commas let you know additional information is coming.

In contrast, restrictive clauses provide essential information. These clauses define the noun. Depending on the type of clause a relative pronoun introduces you may or may not need to employ a comma.

The difference between who and whom

“Who” and “whom” are the two relative pronouns that cause the most confusion. “Who” operates as a subject pronoun. Other subject pronouns include I, she, we, he, and they.

In contrast, “whom” works as an object pronoun. It functions like the words “me”, “them”, “him”, “her” and “us”. When the pronoun operates as a verb or preposition’s object use the object form.

The object form is not usually as perplexing as the subject form. The object pronoun usually follows the verb or preposition it modifies.

“Whom” creates confusion because it comes before the modifying preposition or verb.

Example of correct usage of whom

Example of incorrect usage of whom

You call pronouns that do not refer to a specific person, place, or thing indefinite. Examples of these non-particular pronouns include:

When these pronouns replace a subject the verb that follows is usually singular.

When the object and subject of a verb refer to the same person or thing you use a reflexive pronoun. Self and selves end this type of pronouns. Examples of reflexive pronouns include myself, himself, yourself, herself, itself, ourselves, themselves, and yourselves.

Intensive pronouns are the same as reflexive pronouns, but they perform differently. They underline the importance of something.

This emphasizes the fact the baker didn’t need help to make the cake.

Possessive pronouns fall into two categories: limiting or absolute. Limiting possessive pronouns include my, your, its, his, whose, their, our, and her. Use these words to show that the antecedent possesses something.

Apply the absolute possessive pronoun when something belongs to the antecedent.

Demonstrative pronouns depend on a specific reference. Without the proper context in place, you cannot understand these pronouns.

In addition, you employ “that” for singular far away items while “those” refers to many items far away. All demonstrative pronouns express distance either metaphorically or physically.

The reciprocal pronoun is used to show an action or feeling which is reciprocated, words in this category are one another and each other. 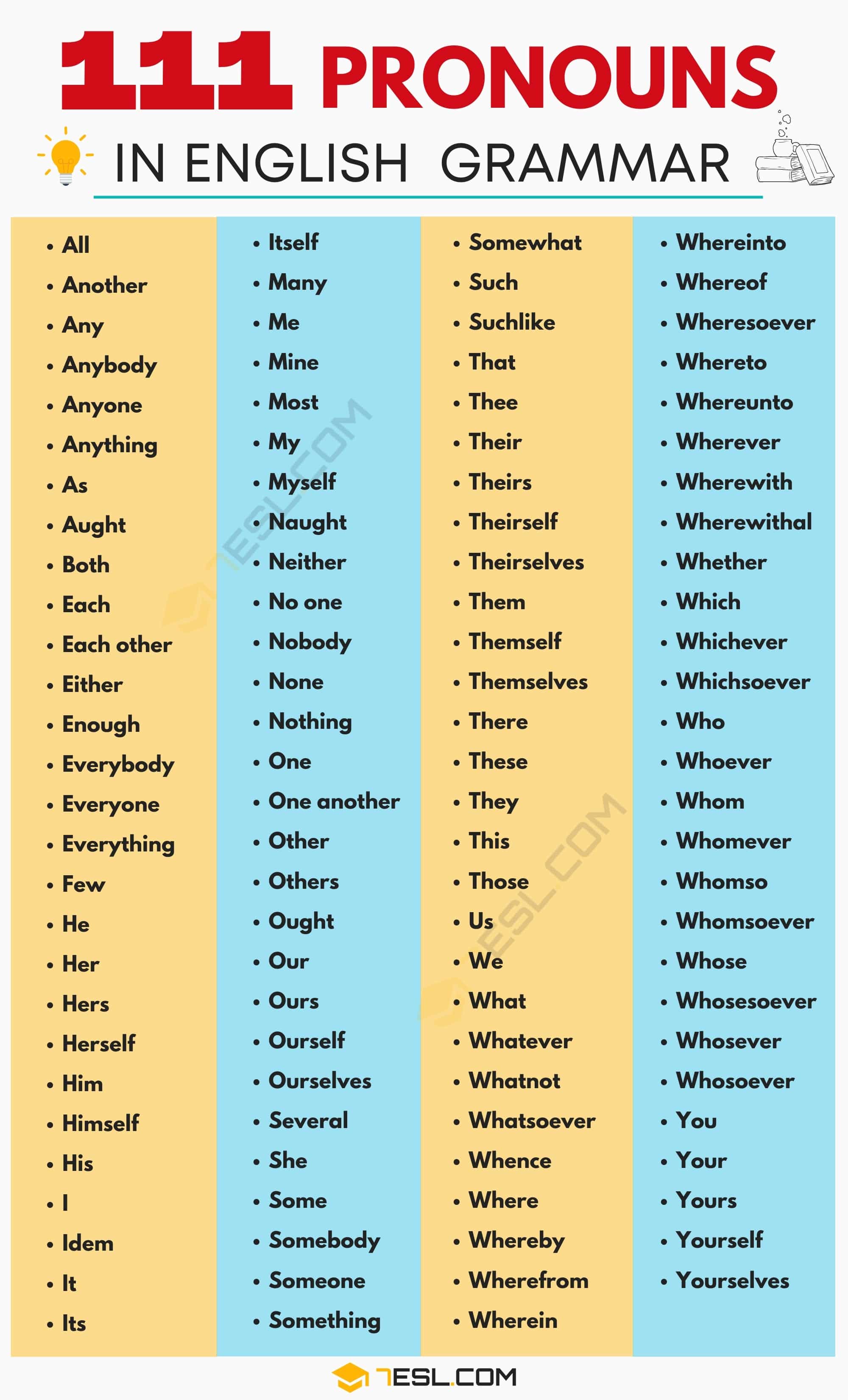 you should not put that name it is inappropriate # change it

No you are taking so much fees