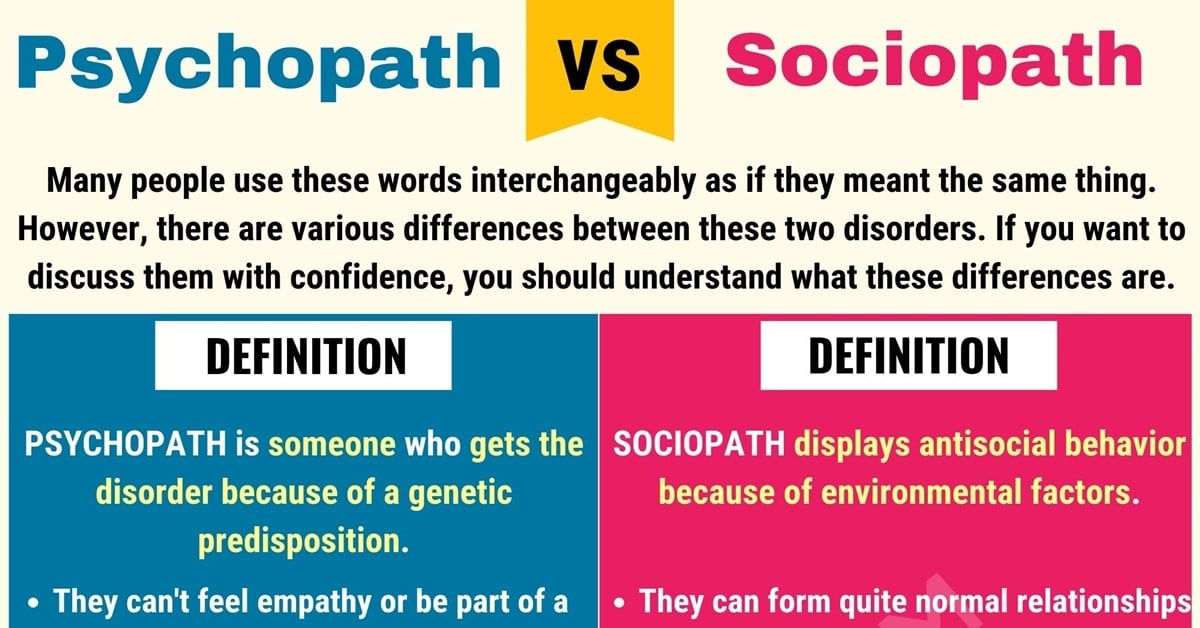 Psychopath vs. sociopath! When it comes to anti-social personality disorders, two words that you’re probably thinking about are psychopathy and sociopathy. Many people use these words interchangeably as if they meant the same thing. However, there are various differences between these two disorders. If you want to discuss them with confidence, you should understand what these differences are.

The first difference is that a PSYCHOPATH is someone who gets the disorder because of a genetic predisposition, while a SOCIOPATH displays antisocial behavior because of environmental factors, such as childhood trauma, or neglect from parents.

In addition, a psychopath can’t feel empathy or be part of a loving relationship; he can only pretend that he has these feelings towards someone else. A psychopath also doesn’t have a conscience and is unable to feel guilt. As a general rule, psychopaths are manipulative and only form relationships with those people whom they can take advantage of. They use people who think that they are their friends, and they don’t even feel bad about it.

In contrast, a sociopath can become attached to a specific group of people and really feel love, affection, and guilt, but he will be very hot-tempered and impulsive. Still, sociopaths can form quite normal relationships and even have legitimate close friends.

Psychopaths are excellent at understanding and mimicking human emotions. Even though they don’t experience the feeling that they’re supposed to experience in a certain situation, they can easily pretend that they do. That’s what helps them manipulate other people and their emotions, be trusted and have successful careers. This isn’t the case with sociopaths, whose impulsive behavior rarely lets them stay at one job for a long time and become respected members of society.

Because psychopaths don’t feel empathy, some of them become serial killers. However, a psychopath can’t be described as impulsive; if he’s going to commit a crime, he’s going to be very precise and plan it very carefully. In fact, psychopaths rarely commit violent crimes. When motivated by revenge or greed, they would rather manipulate people around them, though without breaking the law in any way. A crime committed by a sociopath, however, is unlikely to go unnoticed. The actions of a sociopath are usually unplanned and leave a lot of clues.

Still, it would be wrong to say that there are no similarities between people who have these two personality disorders. In many cases, psychiatrists call someone a psychopath or a sociopath only based on whether the disorder is hereditary or acquired, not basing the decision about which is which on the behavior of the patient.

The first symptoms of both disorders are the same: usually, it all starts with cruelty towards animals and lack of emotional response to their own actions, or actions of other people. However, if noticed and diagnosed in time, both psychopathy and sociopathy can be treated with psychotherapy and medication.

When to Use Sociopath vs. Psychopath | Picture 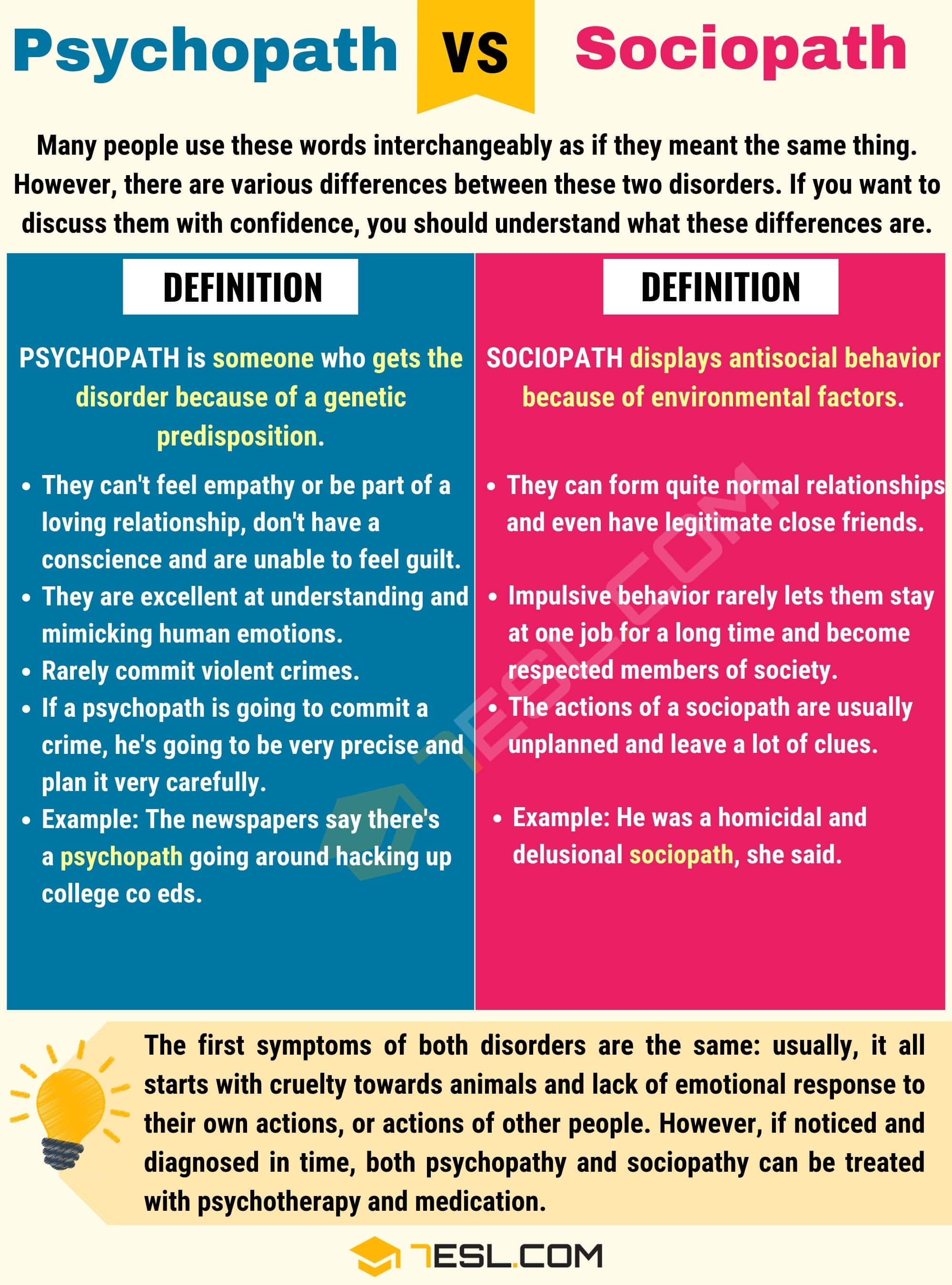 Hello, just a question, on a youtube video by someone who is quite famous, psych2go, they explain that your statement here is actually wrong and a sociopath is the manipulative one. Of course, they didn’t actually point out that you were wrong, rather by just explaining what a sociopath is. They also said that psychopaths were the hotheads, is this true?

I agree Kumaneko. I’ve always known sociopaths to be the less dangerous, yet still very manipulative ones. They hold steady jobs and can have relationships and do not hurt animals. Once they have changed over to psychopathy, which is based on environmental factors, the violent tendencies start to show. All psychopaths are sociopaths, but not all sociopaths are psychopaths. It’s like having an old tire on your car when you get it, but then a drive through a construction zone is what caused it to become flat. It was already a thin tire, but all it needed was the right… Read more »