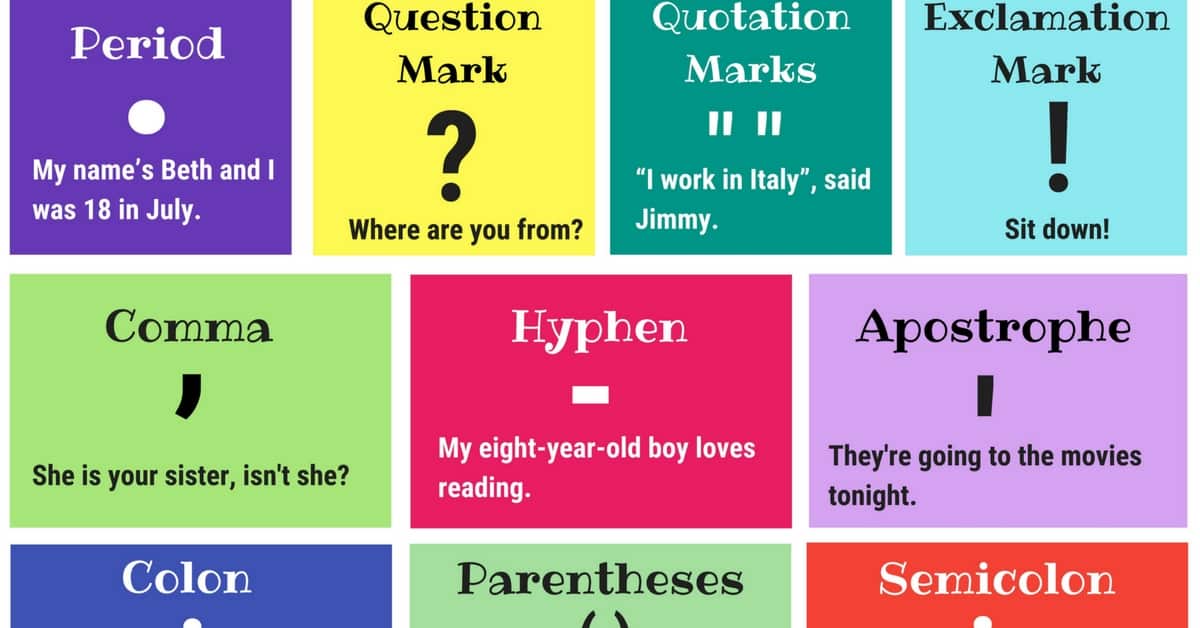 The English language has many punctuation marks, and you will usually learn to use many of them as you master the language. Still, there are some punctuation mark uses you might still not know about despite using and seeing them on a regular basis.

The following image looks at the 14 common punctuation marks used in the English language. 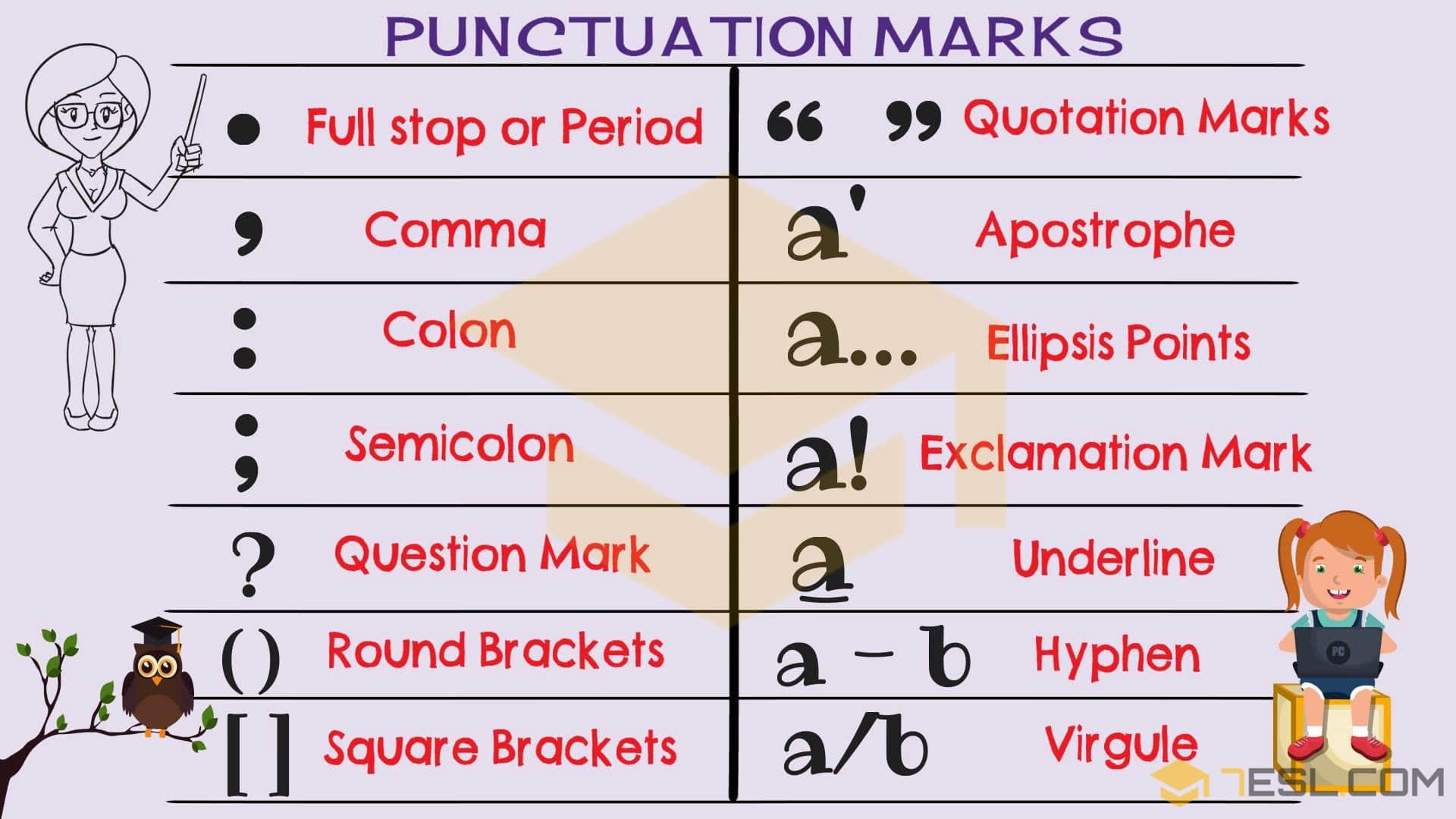 A full stop, also known as a period (.) in American English, is one of the most commonly used punctuation marks in the English language. Analysis of texts indicates that approximately half of all punctuation marks used are full stops.

We use a question mark (?) after an interrogative sentence in English.

We use quotation marks (” “) for direct quotations in English.

An apostrophe (‘) is used to show that certain letters have been omitted from a word. The punctuation symbol can also be used to show the possessive form of a noun, in addition to indicating the plural form of lowercase letters.

(1) Use an apostrophe in contractions

(2) Use an apostrophe to indicate possession

A comma (,) is used to show the difference between two separate ideas or elements within a sentence. Commas have other uses as well, as they can be used to separate numbers, and write dates.

The comma rules and examples:

(1) Add a comma when two separate sentences are combined

(2) Use commas between words in a series. Notice that a comma does not follow the last word in the series

Example: He was tall, dark, and handsome.

Example: As the day came to an end, the firefighters put out the last spark.

Example: No, thank you.

(5) Use a comma to set off a tag question from the rest of the sentence.

Example: She is your sister, isn’t she?

(6) Use a comma to indicate a direct address.

Example: Is that you, Mary?

(7) Add a comma when a participle phrase clause is used.

Example: Walking slowly, I could see the beautiful flowers.

(8) Use a comma to separate parts of the date. 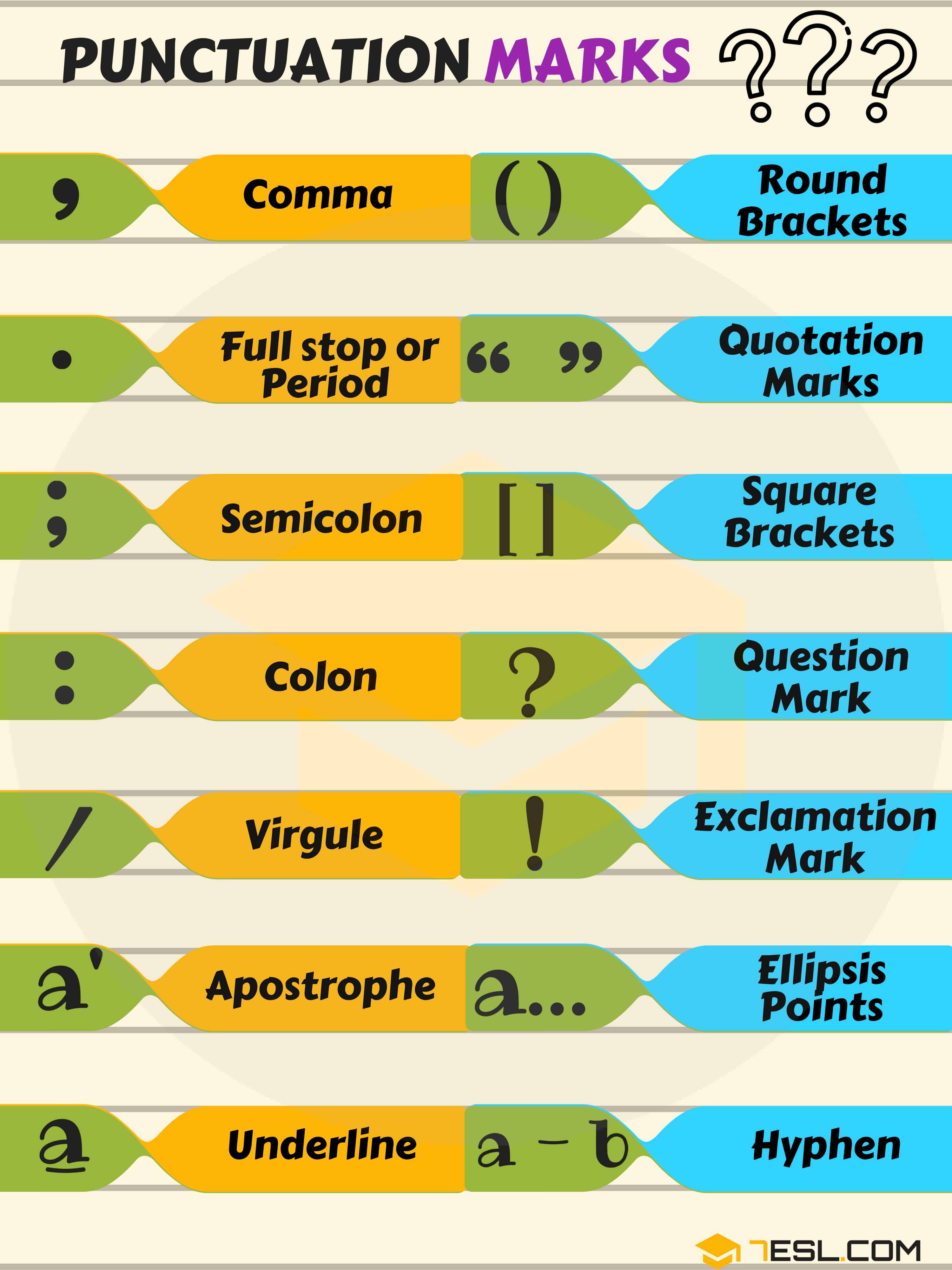 The hyphen rules and examples:

(1) Use a hyphen to join two or more words together into a compound term. Do not separate the words with spaces.

(2) To link prefixes to words.

For example: These things happened before the pre-enlightenment era.

For example: Unlike what some people might think, the twentieth-century was very different from other preceding time periods.

The dash is used to separate words into statements.

Slightly wider than a hyphen, the en dash is a symbol (–) that is used in writing or printing to indicate a range or connections.

Twice as long as the en dash, the em dash (—) can be used in place of a comma, parenthesis, or colon to enhance readability or emphasize the conclusion of a sentence.

Example: She gave him her answer—No!

We often use an exclamation mark (!) to show strong emotion or give a command.

A colon (:) is a fairly common punctuation mark with a varied number of uses. It can be used to introduce a quotation, an example, a series, or even an explanation. Secondly, it can be used to separate two independent clauses. Finally, a colon can be used to show emphasis.

A semicolon (;) is used to separate two independent clauses while still demonstrating that a close relationship exists between them. The semicolon does a better job of showing the connection between two statements than a full stop would.

Parenthesis, ( () ) are quotation marks that show additional thoughts about a statement. In many scenarios, they can be replaced by commas without any changes to the meaning of the sentence.

We also often use parentheses to set off less important details.

Example: The two brothers (Richard and Sean) were learning how to play guitar.

Brackets are squared off quotations ([]) that are used to show information of a technical nature. Even if this information is omitted entirely, the sentence would still make sense.

For example: Was he [the defendant] there when you arrived?

An ellipsis is usually represented by three dots (…), although it can also be represented by three asterisks (***). This punctuation symbol is used to show that there has been an omission of some letters or words. In many cases, ellipses are used to cut statement short to avoid unnecessary or irrelevant words that have no impact on the meaning of the statement being made.

We often use an ellipsis to show that parts of sentences are left out.

A slash, which is also known as a forward slash, a virgule, or even an oblique dash, has a number of uses. The slash can be used to separate lines in a song or poem when they are written in a continuous line. The slash (/) is also used in place of the word or. The slash can also be used to show two contradictory notions.

The slash punctuation rules and examples:

(1) Use slashes to separate parts of the internet (web) addresses and file names for some computer programs.

(2) Use slashes for fractions

(3) Use a slash to separate the day, month, and year in date.

(4) Use a slash to show the word “per” in measurements.

(5) Use a slash to separate lines of poetry or rhymes in regular text.

Example: Twinkle, twinkle, little star, / How I wonder what you are. / Up above the world so high, / Like a diamond in the sky.

(6) Use a slash to show alternatives in a sentence. 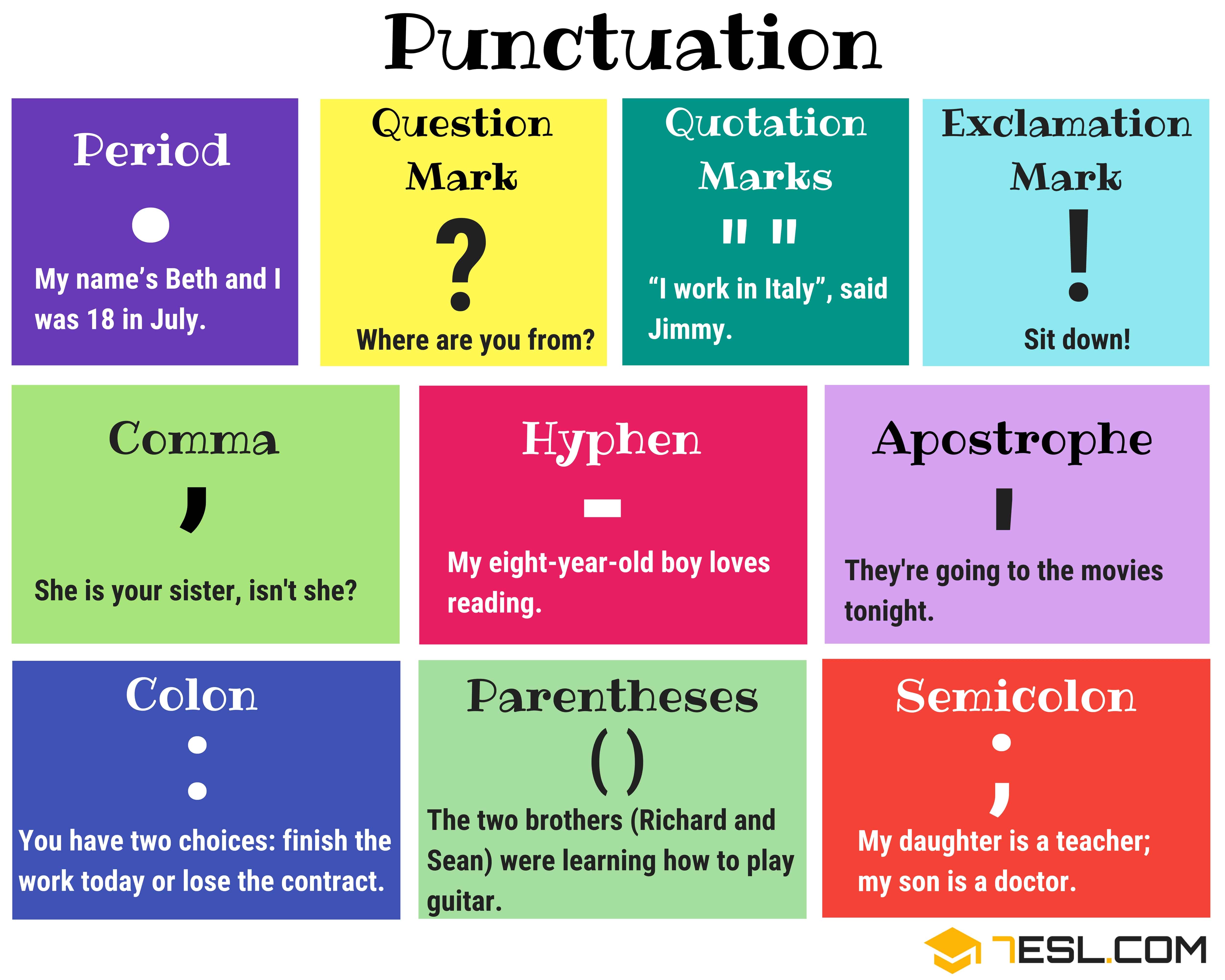 Though British and American English have lots of similarities, when it comes to punctuation styles, there are some differences.

Differences Between Punctuation in British and American English 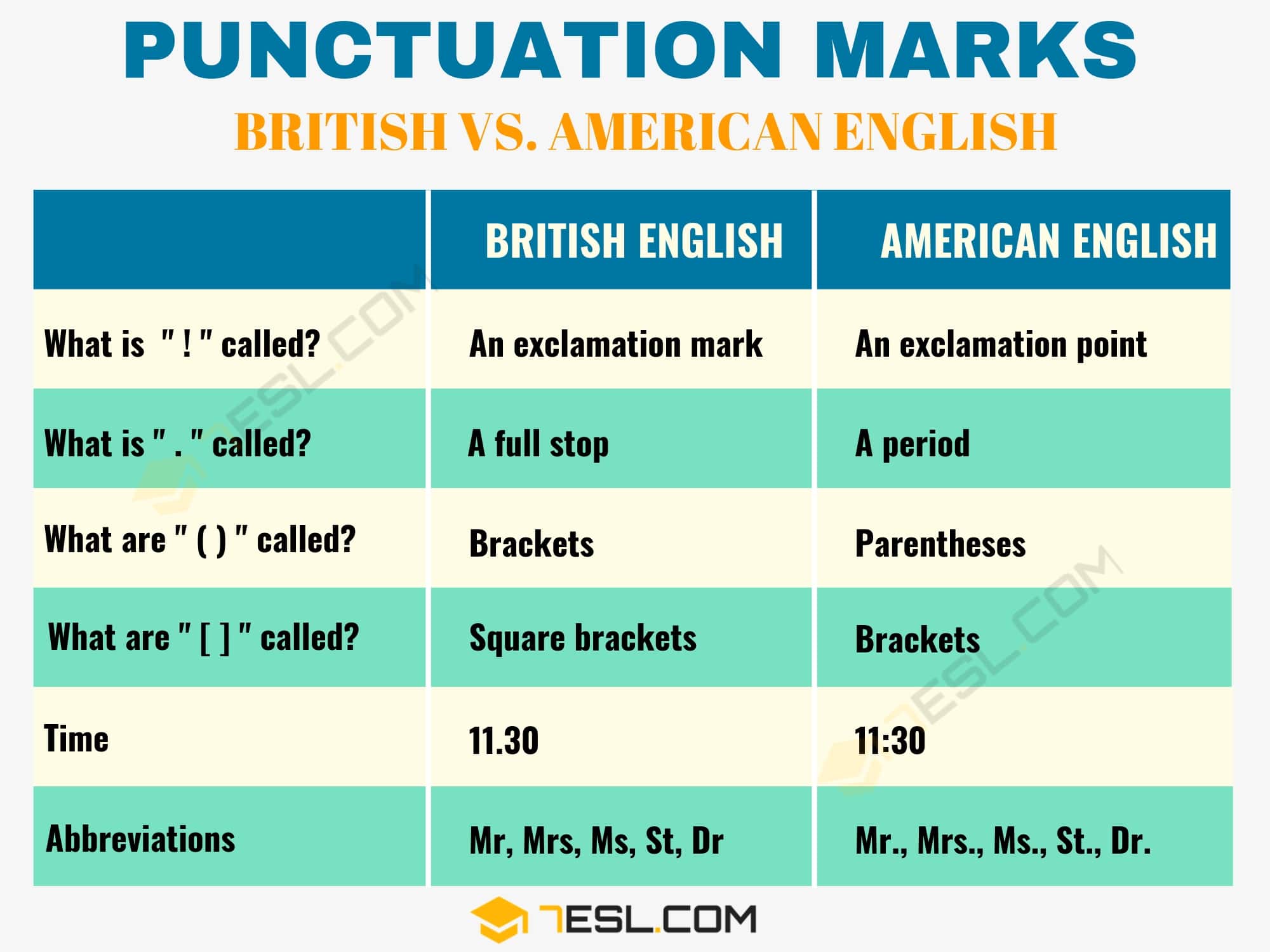 Thanks for this valuable summary, What about using the exclamation mark after appreciation such as; have a good day!

Yes, You can use exclamation mark

thank for the summary

Sorry but no it can help others

Wats so useless about it

It not. rather it will help you more in life

what punctuation mark to use for a list of things if not in bullet pints?
E.g.
Things to bring: pens; rulers; erasers
Is the above correct? Or would a comma be better than a semi-colon?

Please correct the part of comma: as you mentioned “users” instead of uses , I know such typing error may happen but sometimes it is best to make web error free.