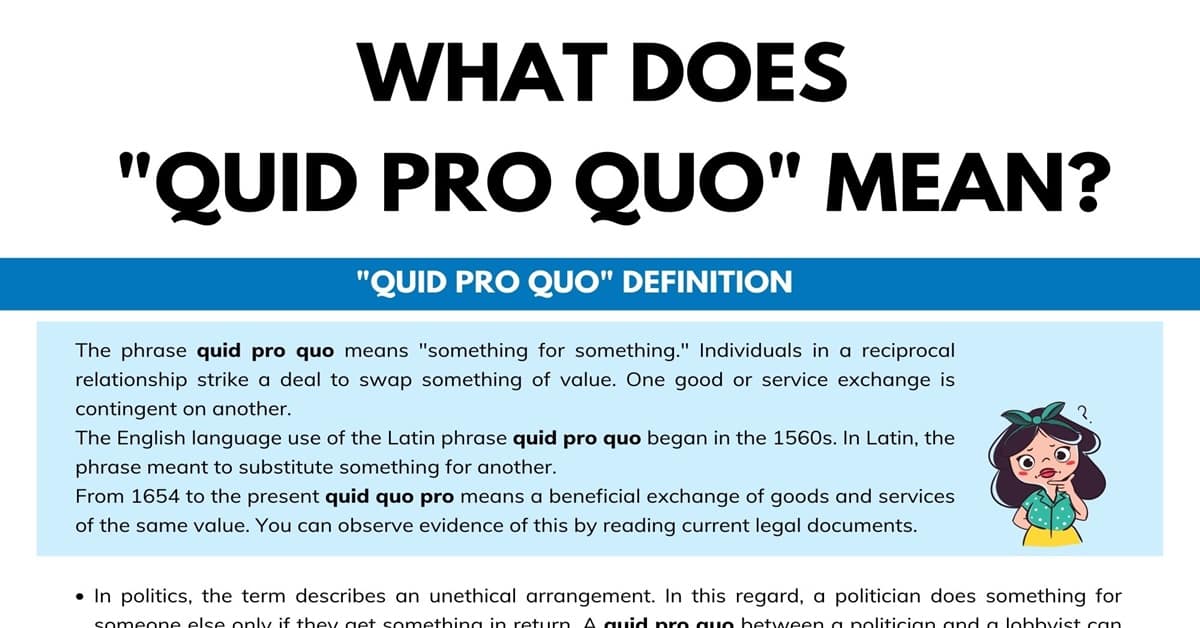 What does quid pro quo mean? The phrase quid pro quo has received a lot of attention in recent years. This is due to the impeachment trial of the 45th American President. Newscasters and politicians fought to define the term for the general public. Sometimes they used broad definitions. Other times reporters and public officials tried to define the phrase in legal terms.

This article will examine the definition of the term, its origins, how to use the term in common discourse. It will discuss synonyms related to the phrase.

What Does Quid Pro Quo Mean?

The phrase quid pro quo means “something for something.” Individuals in a reciprocal relationship strike a deal to swap something of value. One good or service exchange is contingent on another.

In politics, the term describes an unethical arrangement. In this regard, a politician does something for someone else only if they get something in return. A quid pro quo between a politician and a lobbyist can sew corruption in the political arena. In this arrangement, legal ramifications can develop depending on the favors dispatched.

In the business industry, the phrase has a negative connotation. The term becomes even more dubious when associated with two multibillion-dollar companies. Exchanging large amounts of money for favors can decimate an industry. It can be hard for small businesses to compete with companies that stack the deck in their favor.

Trouble arises when companies breach ethical and legal boundaries to establish these agreements. With huge resources at their disposal companies can sometimes escape legal consequences.

Engaging in a quid pro quo can be tricky; especially, if you are in a position of power. The actor’s motivations determine the legality of a quid pro quo.

The English language use of the Latin phrase quid pro quo began in the 1560s. In Latin, the phrase meant to substitute something for another.

The Reign of King Charles: An History Disposed into Annalls (1654) recorded this phrase. The text reflects on Christ’s covenant. He states that Christians had their own tasks to complete if they wanted God’s acceptance. Believers had to forsake the devil and his ways. In this way, the covenant locked worshipers into a reciprocal agreement with God. The term came to mean an exchange for personal benefit.

From 1654 to the present quid quo pro means a beneficial exchange of goods and services of the same value. You can observe evidence of this by reading current legal documents.

English speakers use quid pro quo the same way other language speakers use the Latin phrase do ut des. Do ut des means I give so you may give. Languages like French, Spanish, and Italian use the term qui(d) pro quo to mean making an unintentional mistake.

How to Use “Quid Pro Quo” Properly

If you want to use quid pro quo in a sentence correctly, be sure to treat it as a noun.

A noun is a person, place, or thing. They help build sentences. Nouns can be common, proper, abstract, concrete, countable, uncountable, compound, collective, possessive, singular, or plural. Also, nouns can modify other nouns.

A quid pro quo is an abstract noun. This noun represents a concept or idea rather than a concrete object. You can employ the noun in the plural, singular, and possessive forms.

In the above examples, the sentences discuss one quid pro quo. To keep to the singular expression of the term you keep the root the same.

To make quid pro quo plural you need to add an “s”.

Possessive nouns indicate ownership. To transform a noun into the possessive form, you need to add an apostrophe. Sometimes the apostrophe precedes an s. In this case, the noun uses an apostrophe followed by an s.

You may want to emphasize that your agreement does not meet the requirements of this term. After all, the term has a negative connotation associated with it in some circles

Place “not” before the noun to make it negative. You can also use another negative word like never or neither to make the sentence negative.

The English language offers a plethora of synonyms for the term quid pro quo. Some of these equivalents are benevolent or innocuous. Others take on a sinister tone.

One phrase often listed as a synonym for the term is “tit for tat“. A tit for tat refers to a reciprocal arrangement made by two parties, but unlike a quid pro quo, no one receives any benefit. Instead, a tit for tat is an agreement for retaliation. One person does something upsetting and the first person retaliates. The second person responds to the first person’s retaliation. This continues unless something disrupts this agreement or does not respond to a specific act of retaliation.

A more even-handed synonym would be “one hand washes the other” which means you help me I help you.

Another word for “quid pro quo”: