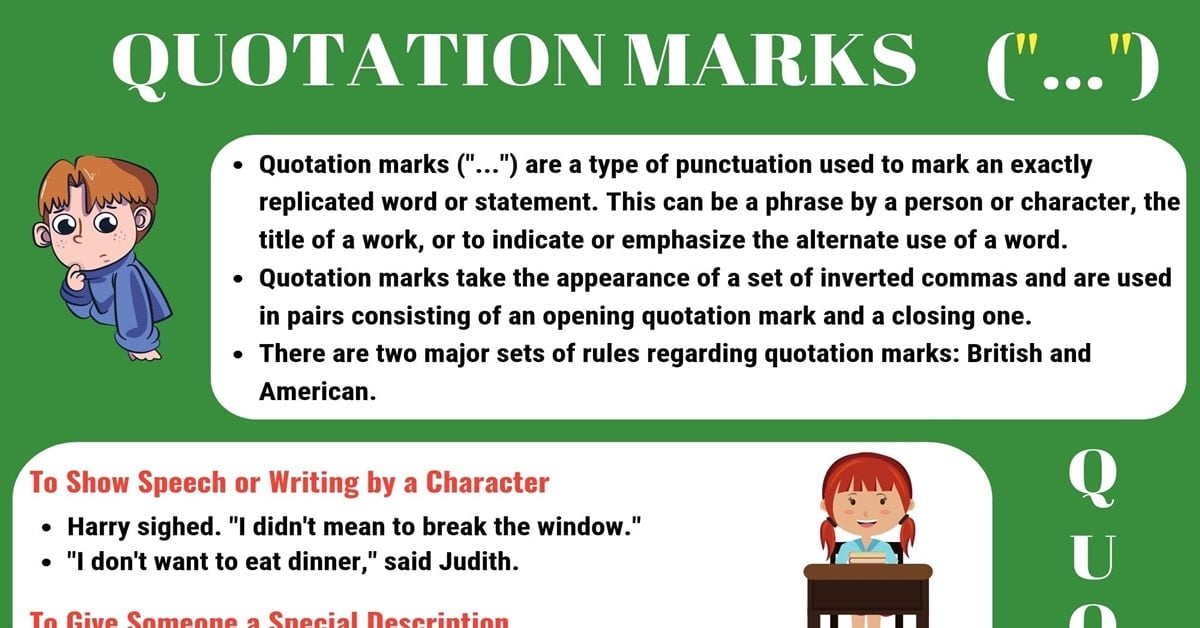 What Are Quotation Marks

Quotation marks or double quotation marks, (” “) are a type of punctuation used to mark an exactly replicated word or statement. This can be a phrase by a person or character, the title of a work, or to indicate or emphasize the alternate use of a word. Quotation marks take the appearance of a set of inverted commas and are used in pairs consisting of an opening quotation mark and a closing one.

There are two major sets of rules regarding quotation marks: British and American.

If we are quoting what somebody said directly, we use double quotation marks. For example:

Scare quotes are used to show irony, sarcasm, or cast doubt on something within a sentence. Essentially, we use scare quotes to show that we mean the opposite of what we say, or we doubt something. Like this:

Although we have already covered it in another article, it’s also important to point out that we use single quotation marks for two reasons only, so we should never use double quotation marks in the following scenarios:

When to Use Quotation Marks

To Show Speech or Writing by a Character

Quotation marks are used to indicate speech or writing by another person in your writing. This can be seen in the following examples:

At times, a longer quotation, or block quote, may be needed that takes up an entire paragraph(s). Quotation marks should not be used in these cases. Instead, special formatting, font, or indenting is used to emphasize the quote.

To Give Someone a Special Description

Quotation marks are also used to indicate unique or unusual descriptors for a person or item, commonly in the form of a nickname or general identifier for an unnamed item.

In the first example, the nickname “Impossible” is a unique descriptor for Ben Jones. He is not known by that nickname to everyone, and it is an uncommon identifier for Ben.

In the second example, “fuzz” is used as a placeholder for a yet unnamed attribute of the mentioned star. Literal fuzz was not seen in the images transmitted by the satellite, but something describable by the word “fuzz” was seen and “fuzz” is used as a filler until that thing can be named.

To Emphasize a Word

Quotation marks are used to indicate an unusual expression of a word, an alternate description of a common word, or any other way in which the word differs from standard usage.

Here, the word “chat” is used as a euphemism. He didn’t actually chat with the neighbors; he more likely scolded or argued with them.

To Notate Smaller Sections in a Larger Composition

Short and complete pieces such as poems and short stories use quotation marks. With these two exceptions, works that do not stand on their own, but belong to a larger composition, such as book chapters or articles in a newspaper, conventionally use quotation marks.

At times, it may be necessary to have a quote within another quoted passage. This is commonly seen when characters are re-quoting themselves or other characters, but may occur for any of the four reasons noted above. When such a scenario occurs, the primary quote is marked with double quotation marks as per usual and the secondary quote, or quote within a quote, is emphasized with single quotation marks.

Learn more about how to quote a quote properly in American and British English.

When to Use Quotation Marks | Picture 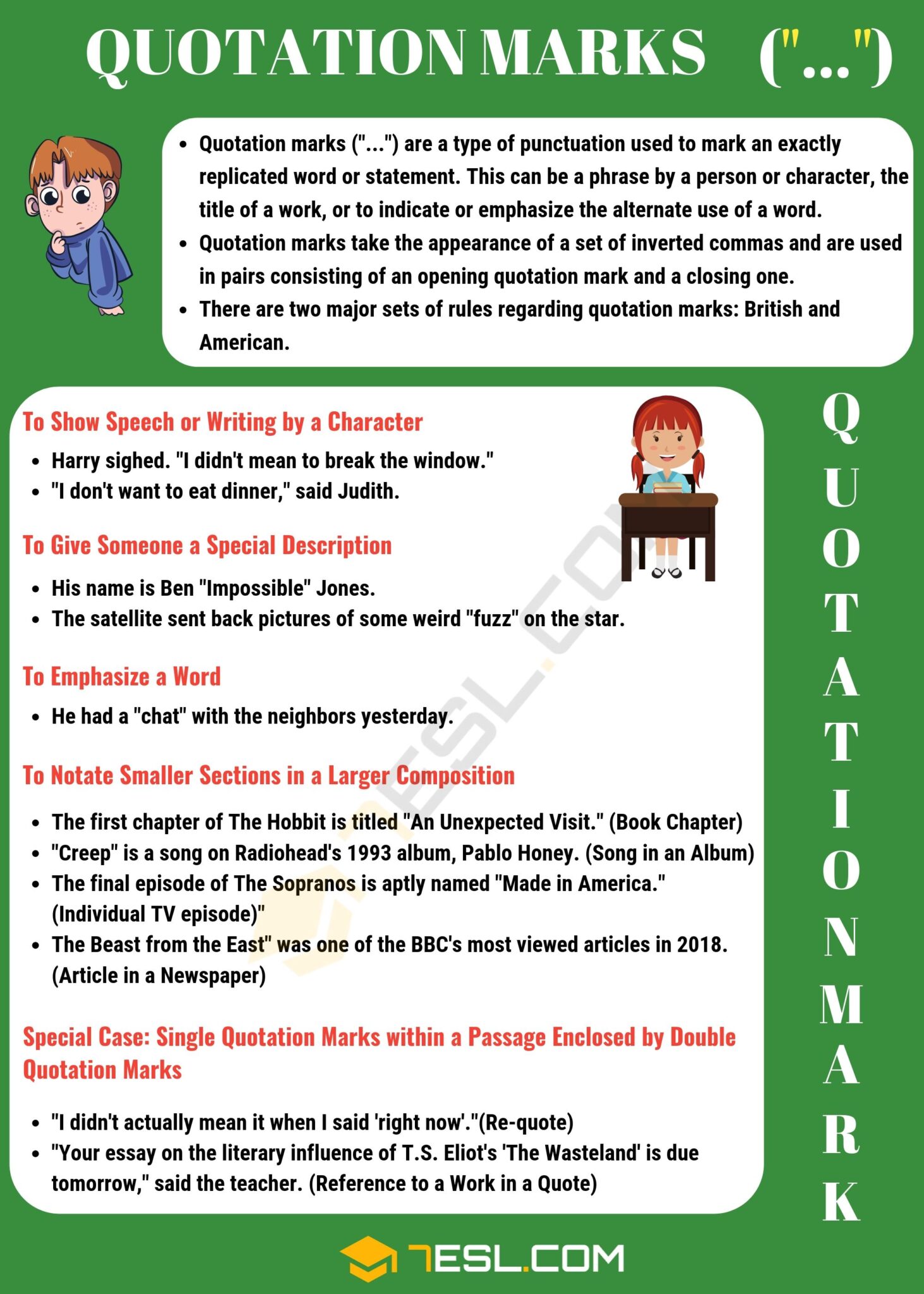 Within American English, punctuation marks such as periods and commas are generally included within the quotation mark whether they are part of the original quote or not. This practice is known as “full stop quoting”. In British English, on the other hand, commas and periods are kept outside the quotation mark if they are not part of the sentence, a practice known as “logical quoting”.

Here, the phrase “burned beyond recognizability” is not a full quote and so the end punctuation, or period, differs depending on whether American or British rules are used.

Here, the phrase “I don’t know” is a complete quote and hence the end punctuation/ period is included within the quotation marks in both American and British styles.

In both styles, the use of question marks or exclamation points depends on the context. The sentence:

is valid for both American and British styles.

There are many conventions regarding the proper use of quotation marks in both British and American punctuation styles. At the end of the day, however, punctuation is a stylistic element. While there are times in which formal and established rules ought to be followed, there are also opportunities for the author to wield punctuation as a creative tool in crafting their characters and story. 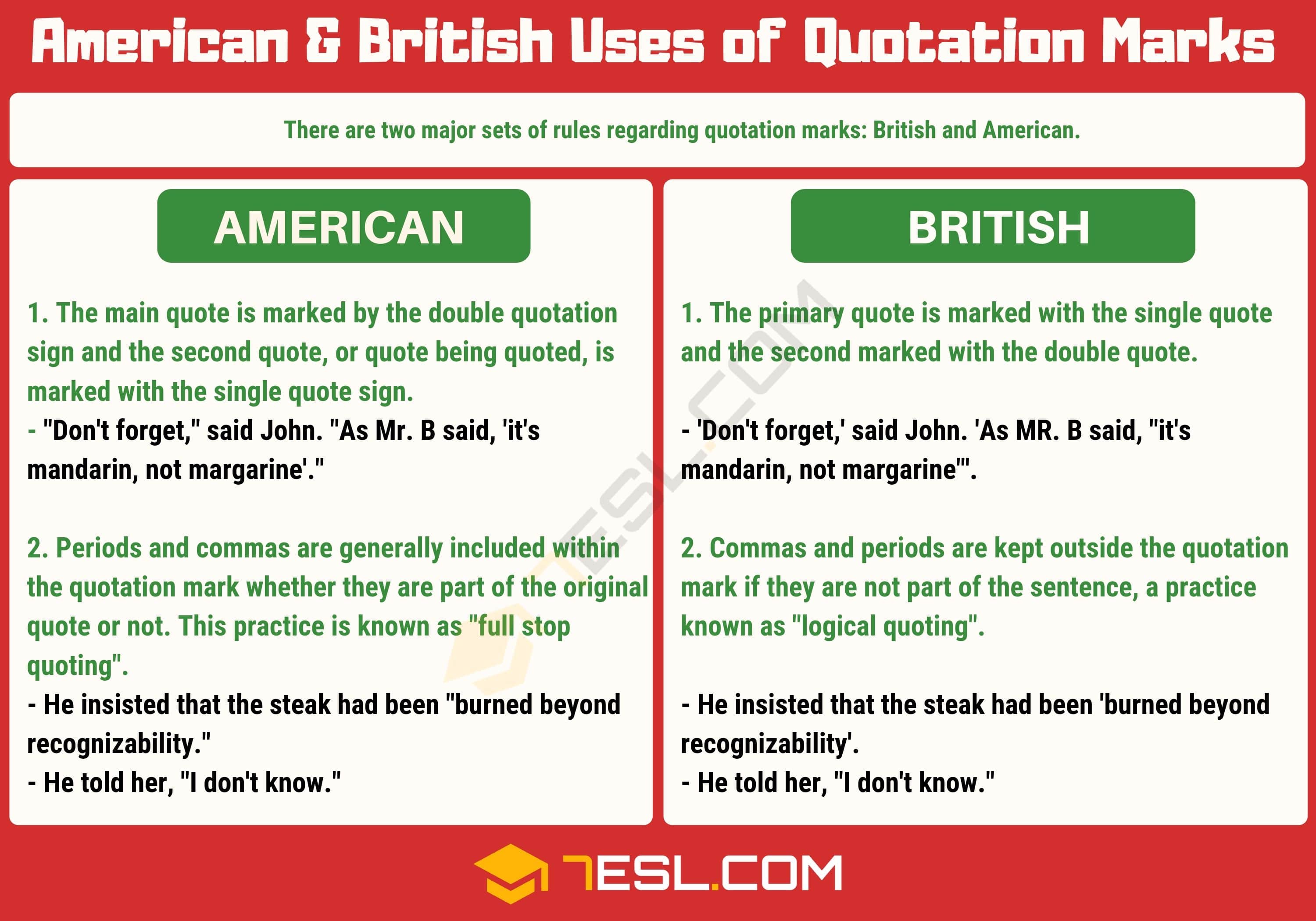 Quotation Marks Mistakes and How to Avoid

Honestly, the most common reason for a mistake when using quotation marks is punctuating them incorrectly. Scare quotes rarely suffer these same mistakes as direct quotes do, so we will focus solely on direct quotes for this next section. Hopefully, by highlighting the common mistakes here, and showing the correct way, you will avoid making them too.

Now that we are using quotation marks to show part of what somebody said within this sentence, we do not need to capitalize the first letter. We do, however, still need to punctuate the quote properly for the rest of the sentence to continue, so a comma is placed again, inside the quotation marks.

Whenever we use part of a quote embedded within a sentence, we do not capitalize them. We also have to punctuate it properly for the rest of the sentence, so a comma is necessary here.