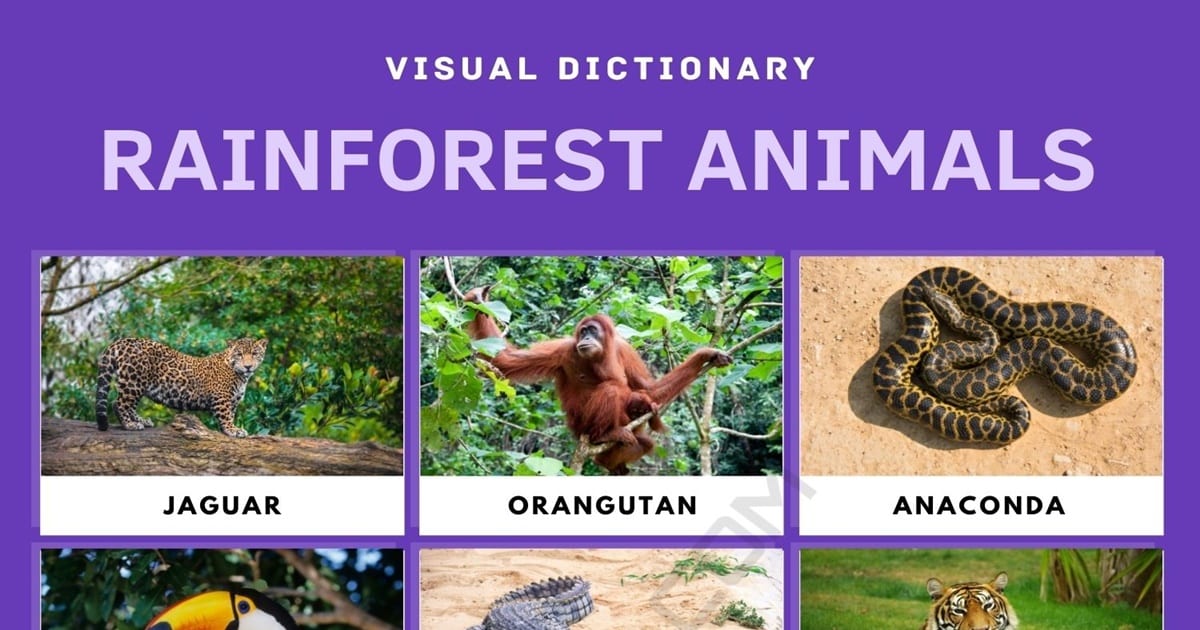 What are rainforest animals? Rainforests are tree-filled ecosystems that are distinguished by their rainfall, with annual precipitation measuring at least 55 to 66 inches per year. These forests can be temperate or tropical, with temperatures between 34 and 59 degrees Fahrenheit for temperate rainforests — and temperatures averaging above 64 degrees Fahrenheit monthly for tropical rainforests. As such, these ecosystems make great conditions for a variety of plants and animals, with some 40 to 75 percent of all known species native to these areas.

What Are Rainforest Animals?

Rainforest animals are reptiles, amphibians, insects, birds, fish, mammals, and other creatures that inhabit the rainforest ecosystem. They are species that have adapted to the conditions of the rainforest — notably the rainforest’s precipitation and temperatures.

Rainforest animals may inhabit the tropical rainforest, which receives at least 66 inches of rain a year and has monthly temperatures of at least 64 degrees Fahrenheit (at times much greater). Tropical rainforests are located in Central and South America, Africa, Asia, and Australia.

Rainforest animals may also inhabit the temperate rainforest, which gets at least 55 inches of rain a year and normally has temperatures between 34 and 59 degrees Fahrenheit. These rainforests are located in North and South America, Europe, Asia, Australia, and New Zealand.

There are several types of rainforest animals, and they can be broadly divided by their biological class type. Among these are mammals, birds, reptiles, amphibians, fish, and invertebrates.

The jaguar is native to Central and South American rainforests. It is a big cat that favors somewhat large prey — whose size can range from 99 to 187 pounds — including the rodent Capybara and the Giant Anteater. 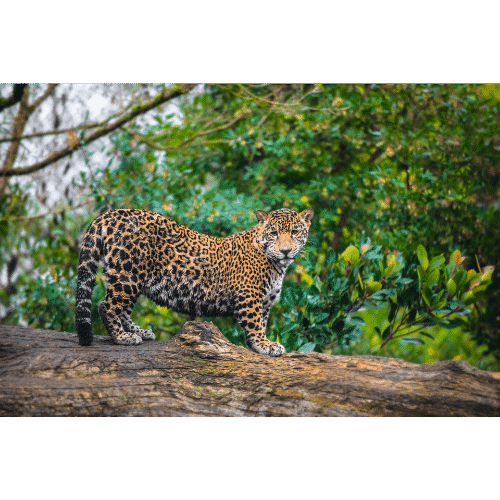 Orangutans are a great ape species that are native to the rainforests of Borneo and Sumatra. They are mostly tree-dwelling and consume figs, mangosteens, and lychees. They drink water from holes in the trees around them. 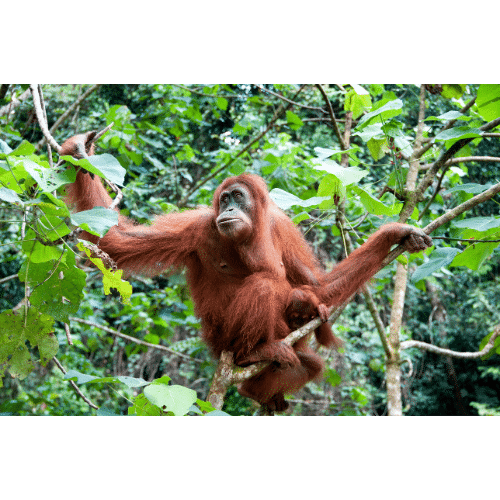 The Green Anaconda is a large snake species that is native to the South American rainforest. It can get as long as 22 feet and is a snake that constricts its prey. It feeds mainly on prey near the water of rivers or swamps, including caimans, peccaries, tapirs, deer, and birds. 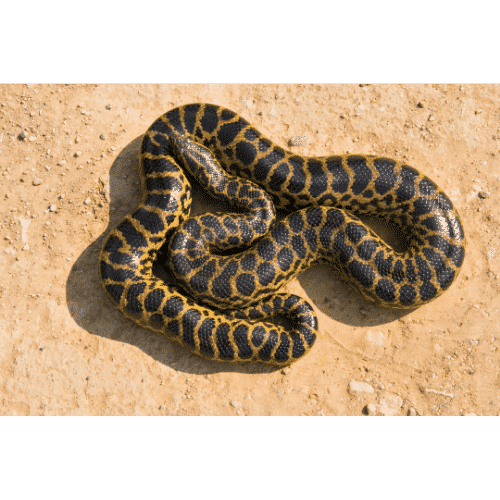 Toucans are native to the rainforests of Central and South America; they are also found in the Caribbean. They are noted for their long, colorful, curved beaks — that are used to pick up fruit and tear away out the fruit’s outer layers and rinds. 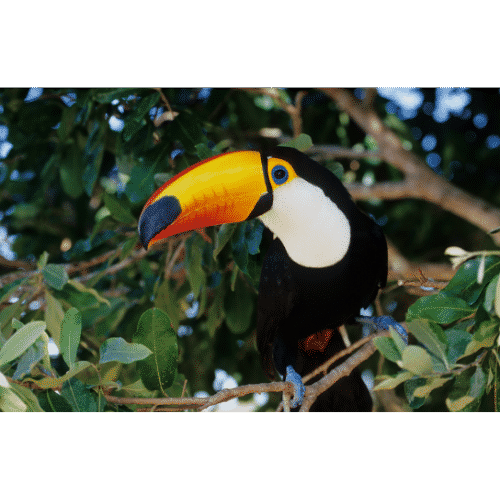 Crocodiles are large carnivorous reptiles that are found in rainforests all over the world, including South America, Africa, Asia, and the Australia/Pacific Region. The Dwarf Crocodile (Osteolaemus tetraspis) of Central Africa feeds on birds, snails, fish, mammals, insects, lizards, bats, shrews, and frogs. 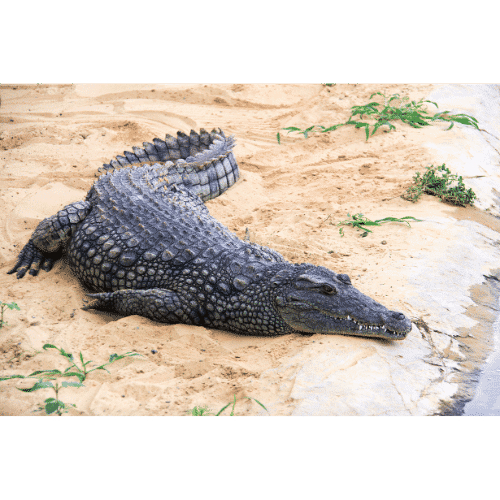 Though tigers can inhabit a number of colder ecosystems, a few species inhabit the tropical rainforest. These include the Bengal Tiger, the Malayan Tiger, the Indochinese Tiger, and the Sumatran Tiger. Tigers inhabit forested regions and feed on deer, wild boar, bovines, and smaller animals. 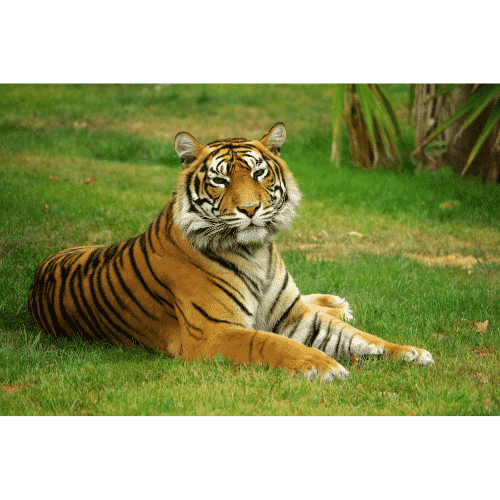 Tarantulas are large spiders that inhabit warm regions in all continents (especially Africa and South America) except Antarctica. Though they do release venom from their fangs into their prey of insects, small birds, and mammals, their bite is mostly harmless (though painful) to humans. 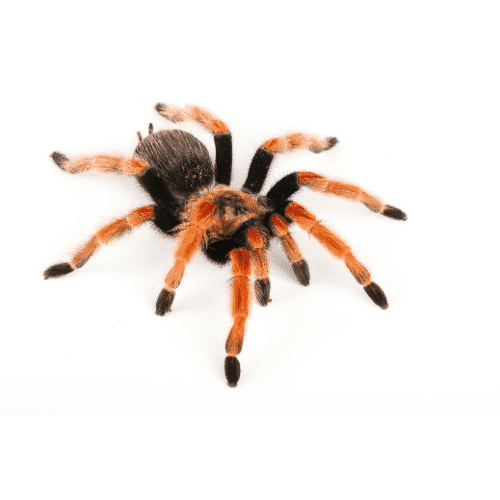 The Okapi is an even-toed hoofed mammal that is native to the rainforests of Central Africa, especially the Democratic Republic of Congo. It is a dark-coated, horse-like animal that has a pattern of zebra-like stripes on its rear legs. It is, however, more closely related to giraffes than zebras. 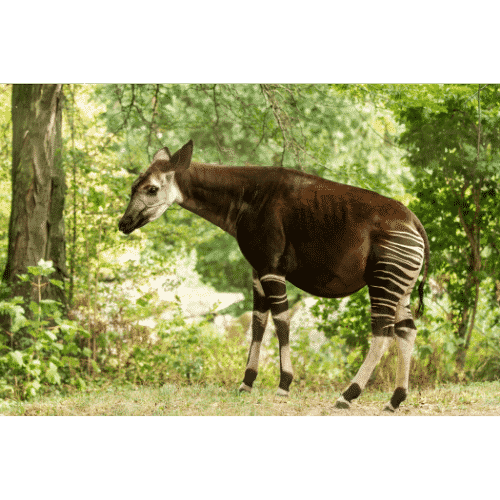 The Electric Eel is not actually an eel, but a type of knifefish (of the order Gymnotiformes). It inhabits the river basins of the Amazon and Orinoco rivers. The Electric Eel has the capacity to emit low-voltage and high-voltage charges of up to 1 amp and up to 860 volts. 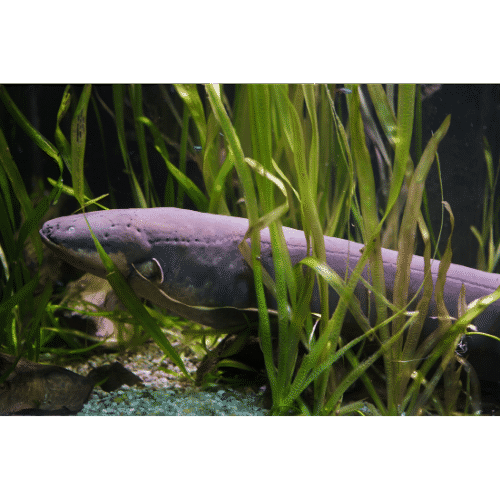 Jaguar are so cool.