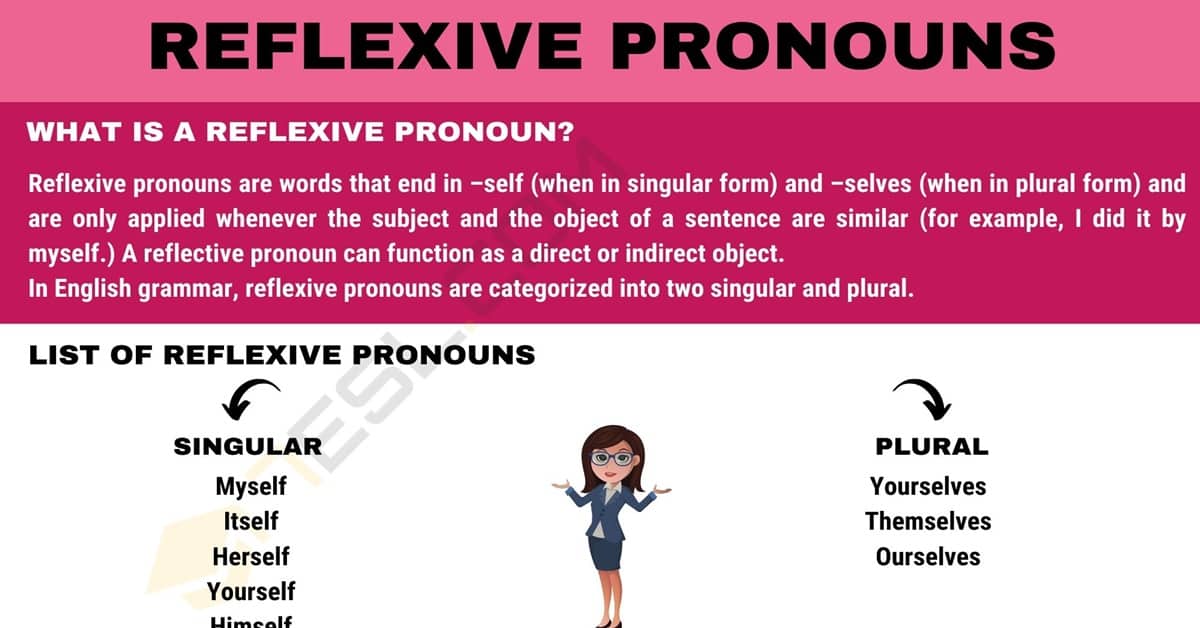 Reflexive Pronouns! What is a reflexive pronoun? A reflexive pronoun is used when we wish to speak about the self, for example words which end in either -self or -selves. This is a frequently used type of pronoun in English and it is important for the English student to fully understand their function.

In this section, we are going to be looking at exactly what the reflexive pronoun is used for and how it functions within both spoken and written English. This will enable you to gain a greater understanding of the concept as well as allowing you to form more grammatically correct sentences.

What Is a Reflexive Pronoun?

Reflexive pronouns are words that end in –self (when in singular form) and –selves (when in plural form) and are only applied whenever the subject and the object of a sentence are similar (for example, I did it by myself.) A reflective pronoun can function as a direct or indirect object.

In English grammar, reflexive pronouns are categorized into two singular and plural.

There are eight reflexive pronouns:

How to Identify and Define Reflexive Pronouns

As from above, identifying reflexive pronouns in a sentence is effortless since they end in –self (when in singular) and –selves (when in plural) and refer back to a noun or pronoun that has already been mentioned. These pronouns are preceded by a verb and act as an object in a sentence making it easy to identify them.

In the first sentence, the subject/noun is represented by “I” the verb here is “taught” and “myself” is the reflective pronoun that refers back to the noun “I.” Here the verb “taught” is being answered by the object “myself.”

How to Match Reflexive and Personal Pronouns?

Since you are familiar with their working, the following a list of reflexive and personal pronouns that correspond.

The following are examples of each reflexive pronoun in sentences. 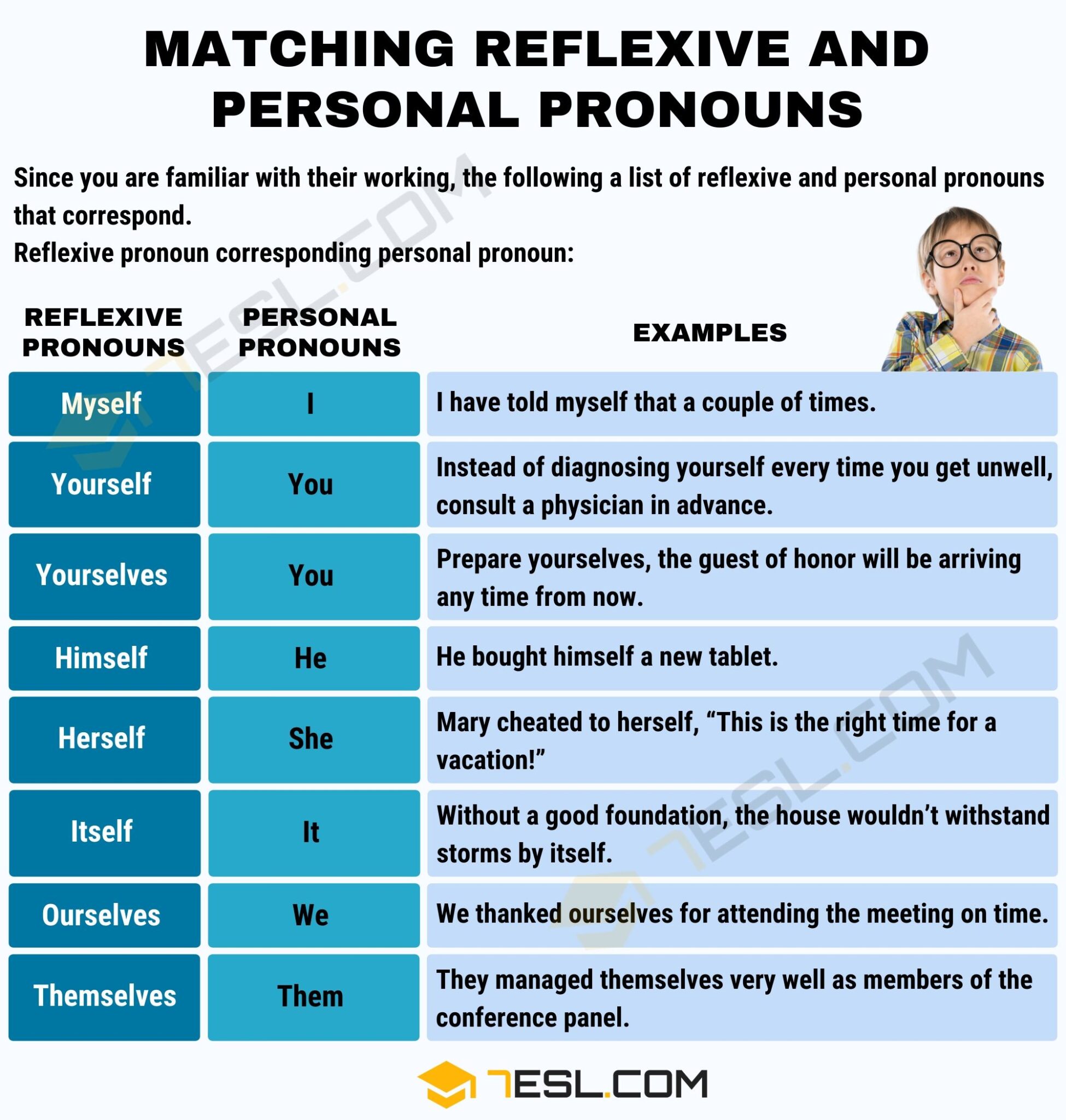 When to Use Reflexive Pronouns

Reflexive pronouns are, in most cases, used to determine whether the subject is performing an action by or to itself. Rather than exerting its action on a different object, the subject exerts the action on itself literally or figuratively.

This is more common whenever the third-person plural is being used. Let’s look at the following sentences:

In the first sentence, you’re not certain whether “them” is denoting to something different or referring back to “they,” which is the subject of the sentence.

In the second sentence, it’s evident who the subject “they” is referring to, and in this case, it refers to the reflexive pronoun “themselves.”

Reflexive pronouns can be used in conjunction with the word “by” to indicate “alone” or “with no help.” Here are the examples:

A reflexive pronoun qualifies to be a direct object if the subject and the direct object in a sentence are similar. Here is an example to illustrate this.

In the first example, Jacob (object) is the receiver of the reward. In the second sentence, Jason (subject) is the object that received the reward, thus the use of the reflexive pronoun himself.

They can act as indirect objects in a sentence. Here is an example.

Always use reflexive pronouns in your writing to make it informative and engaging to your readers. Correct use of these pronouns is necessary if you’re to improve your grammar as well as your writing skills. 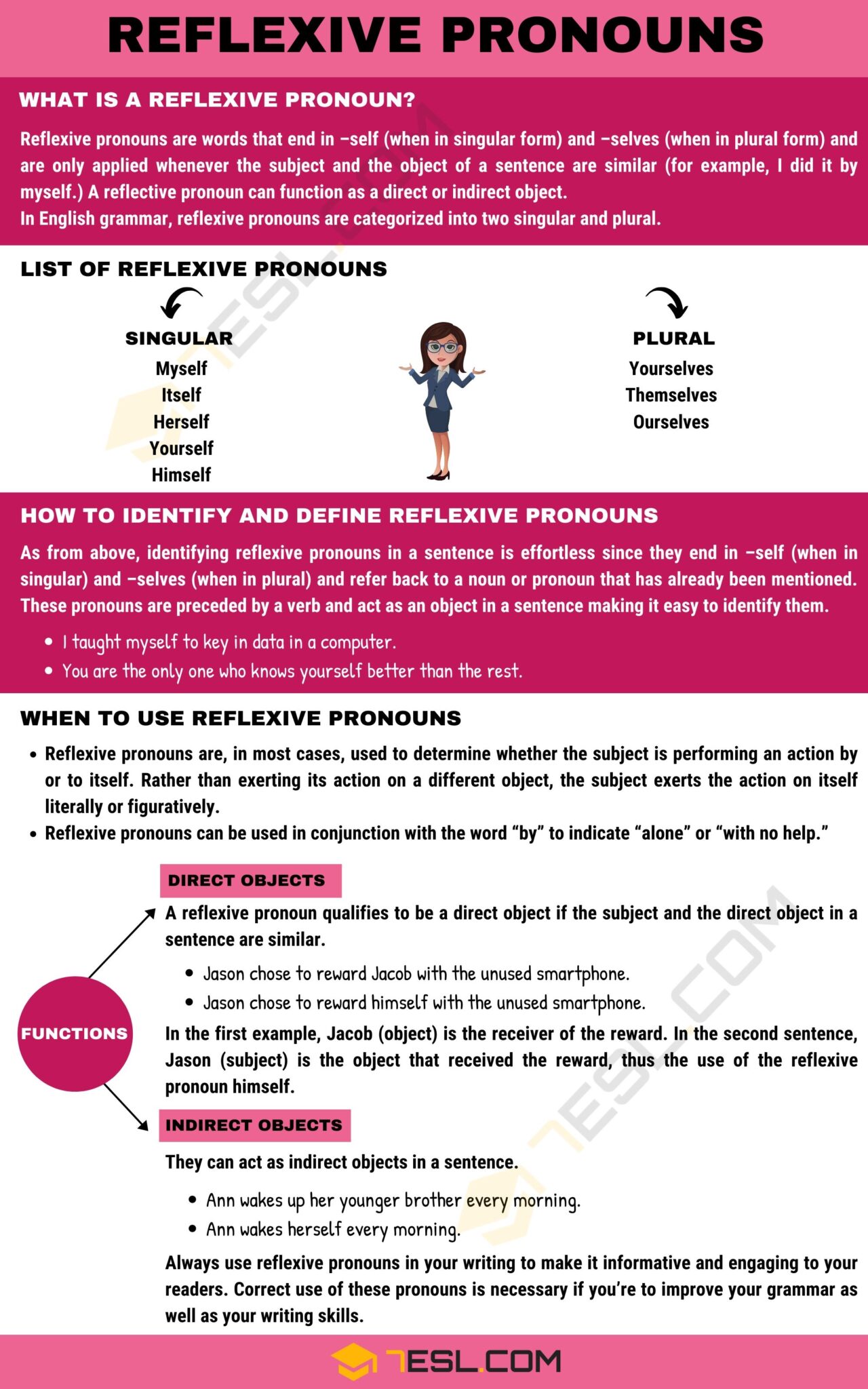