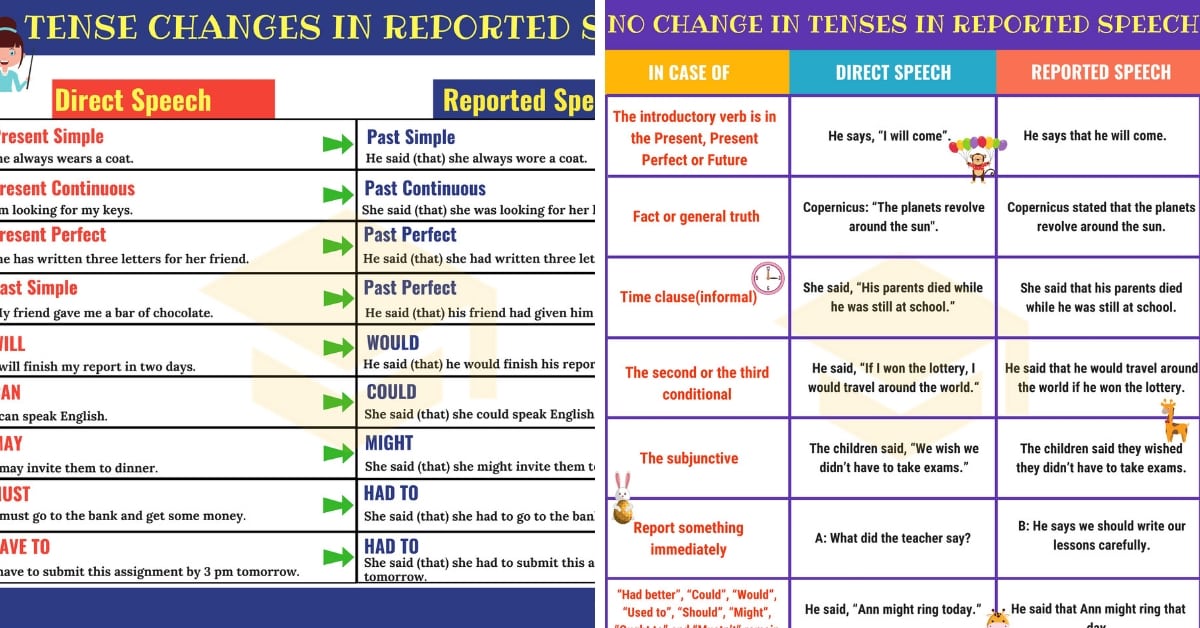 Reported speech is a very common thing in the English language. We do it almost every day, in conversation and in writing. The problem is, sometimes there can be some confusion around the topic. So today we’ll take a look at reported speech: what it is, how to use it, and we’ll look at some good examples of reported speech too, so you can see how it looks in everyday conversations or writing.

When we use reported speech, we are referring to something that was said either by ourselves or by someone else in the past. An example of this might be ‘he said that he was going shopping.’

This type of speech is used very frequently during both spoken and written examples of English and it is an important part of the language which any English student will find useful to learn. In this section, we are going to look at types of reported speech as well as how we can use it.

What is Reported Speech?

Reported speech is simply when we tell somebody what someone else said. You can do this in your writing, or in speech. Reported speech is very different from direct speech, which is when you show what somebody said in the exact way that they said it. In reported speech though, you do not need to quote somebody directly.

Instead, we use a reporting verb, such as ‘say’ or ‘ask’. These reporting verbs are used to report the speech to someone else. There are many different reporting verbs that can be used, and we’ll try to use different ones throughout this article to show you some examples, but you can always do some research too if you want to learn more examples for yourself.

In short, reported speech is the linguistic technique that we use to tell somebody what someone else’s direct speech was. In reported speech though, you may need to make certain changes to the grammar to make the sentence make sense. So, we’ll look at some grammar change examples below and highlight what needs to be changed.

When we use reported speech, we are usually talking about the past (because obviously, the person who spoke originally spoke in the past). The verbs therefore usually have to be in the past too.

When changing from direct to indirect speech, you need to change the grammar in certain ways. In this section, we are going to be looking a little more closely at direct and indirect speech and how they are used.

If the reporting verb is in the present tense, then very little needs to be done to the direct speech sentence to change it. Here’s an example.

Here nothing really needed to be changed except the pronoun, because you are now talking about somebody else, so ‘I’ becomes ‘She’ or ‘He’. The tense is still the same because ‘says’ is the present tense version of the reporting verb. But what happens if the sentence needs to be changed to past tense?

Sometimes it is necessary to change the reporting verb into the past tense if what was said is no longer relevant, or was said sometime in the past. Here are the changes that would need to be made.

As well as changing the pronouns here, we’ve had to change the tense of both the reporting verb and the verb. So, ‘says’ becomes ‘said’ and ‘like’ becomes ‘liked’. 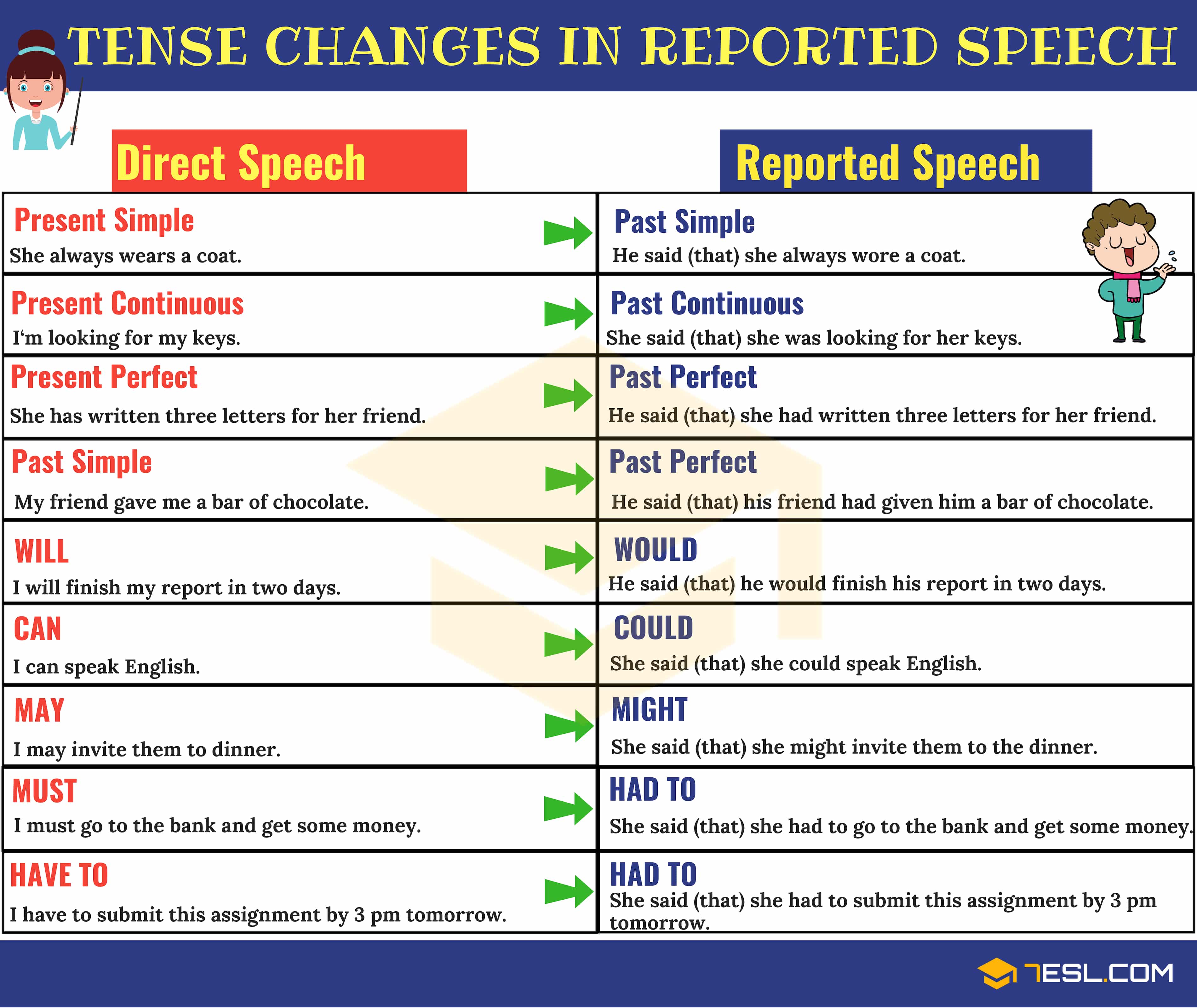 When the reporting verb is in the past tense, verb tense forms usually need to change. The tenses generally move backward in this way:

If somebody is talking about what will happen in the future then, again, you will need to change the tense of the reporting verb.

Notice how ‘shall’ and “will” become ‘would’ here in order for it to make sense.

Modal verbs actually have a very interesting relationship with reported speech, so we’ll look at that below too.

We’ve already covered modal verbs in another article, but it’s interesting to see how they are changed in reported speech.

Let’s take a look at some examples.

Sometimes though, modal verbs do not need to change tense because they already read correctly. Here’s an example.

Both of these sentences make grammatical sense, because we added the pronoun ‘me’ after ‘told’ in the first sentence, but we didn’t after ‘said’ in the second one. Here is the incorrect versions so you can see why it doesn’t work grammatically:

The above sentence makes sense, but sometimes you have to watch your wording of certain things to make sure that you aren’t over-speaking/writing. This can be a problem if you are trying to get your point across quickly. You should always choose the option that is quickest to say/write because it sounds/looks better and you run less risk of making a grammatical mistake.

This guide could not possibly be extensive, because there are many grammar rules that need to be followed when reporting speech, but they vary wildly. The take-home message should really be that when reporting speech, it is important to think carefully about what you are going to say or write, so you know it makes sense. Hopefully, this guide served as a good starting point though, so you can identify reported speech now, and start to think about which grammar rules are applied.

Changes in Time and Place in Reported Speech

Time and place references often have to change in Indirect Speech

Changes in Time and Place in Reported Speech | Image 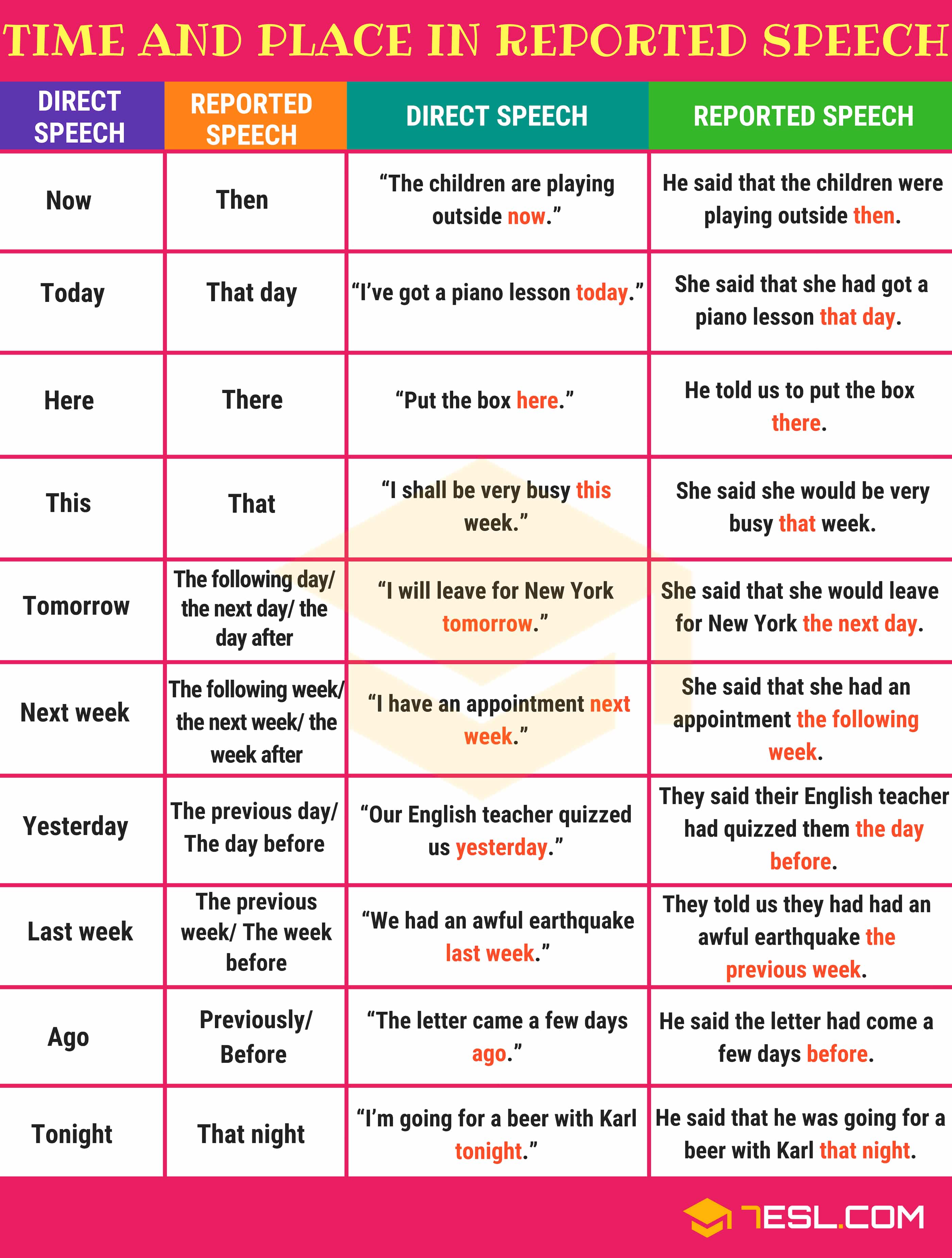 No Change in Verb Tenses in Reported Speech

There is no change in verb tenses in Indirect Speech when:

No Change in Verb Tenses in Reported Speech | Image 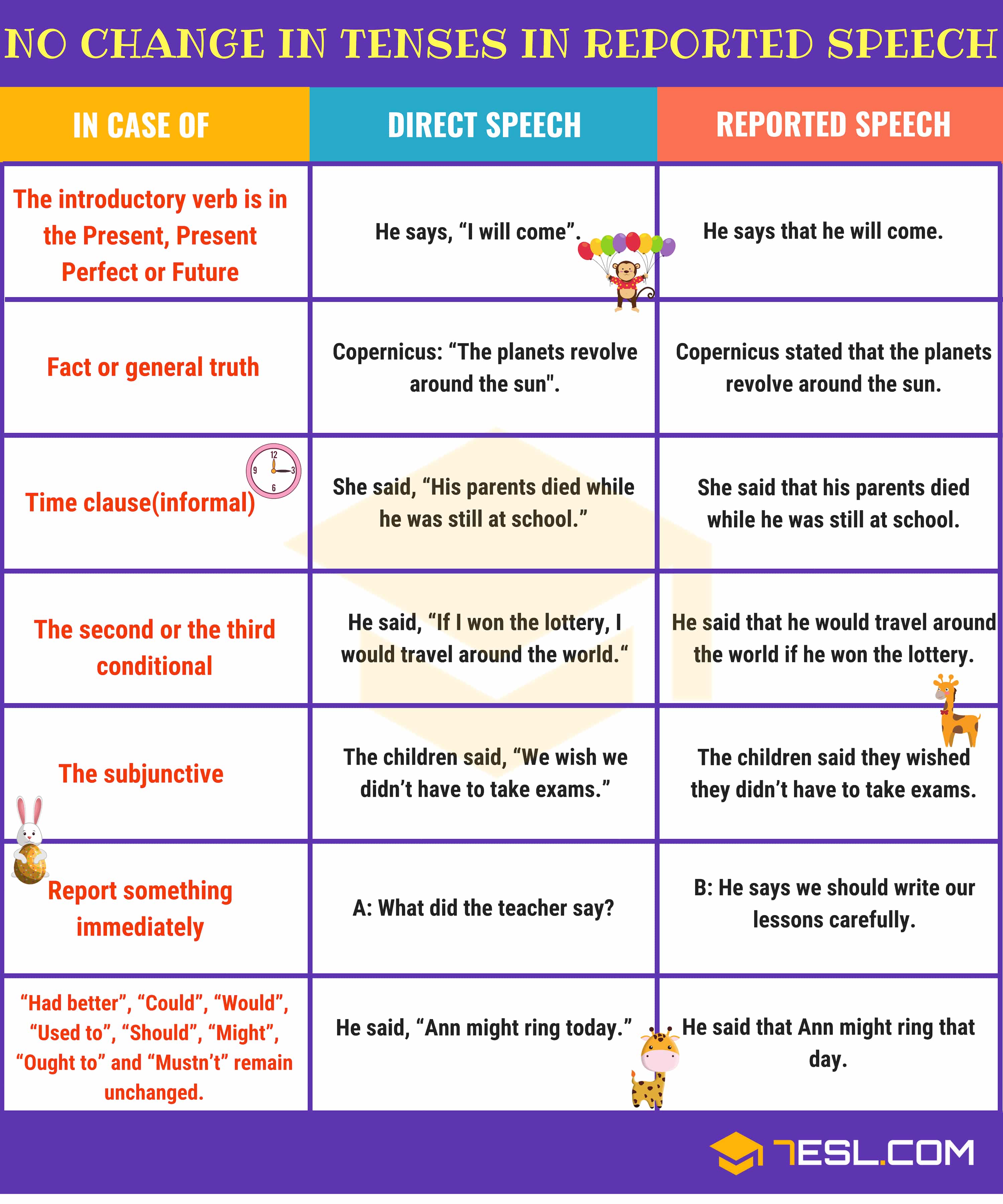 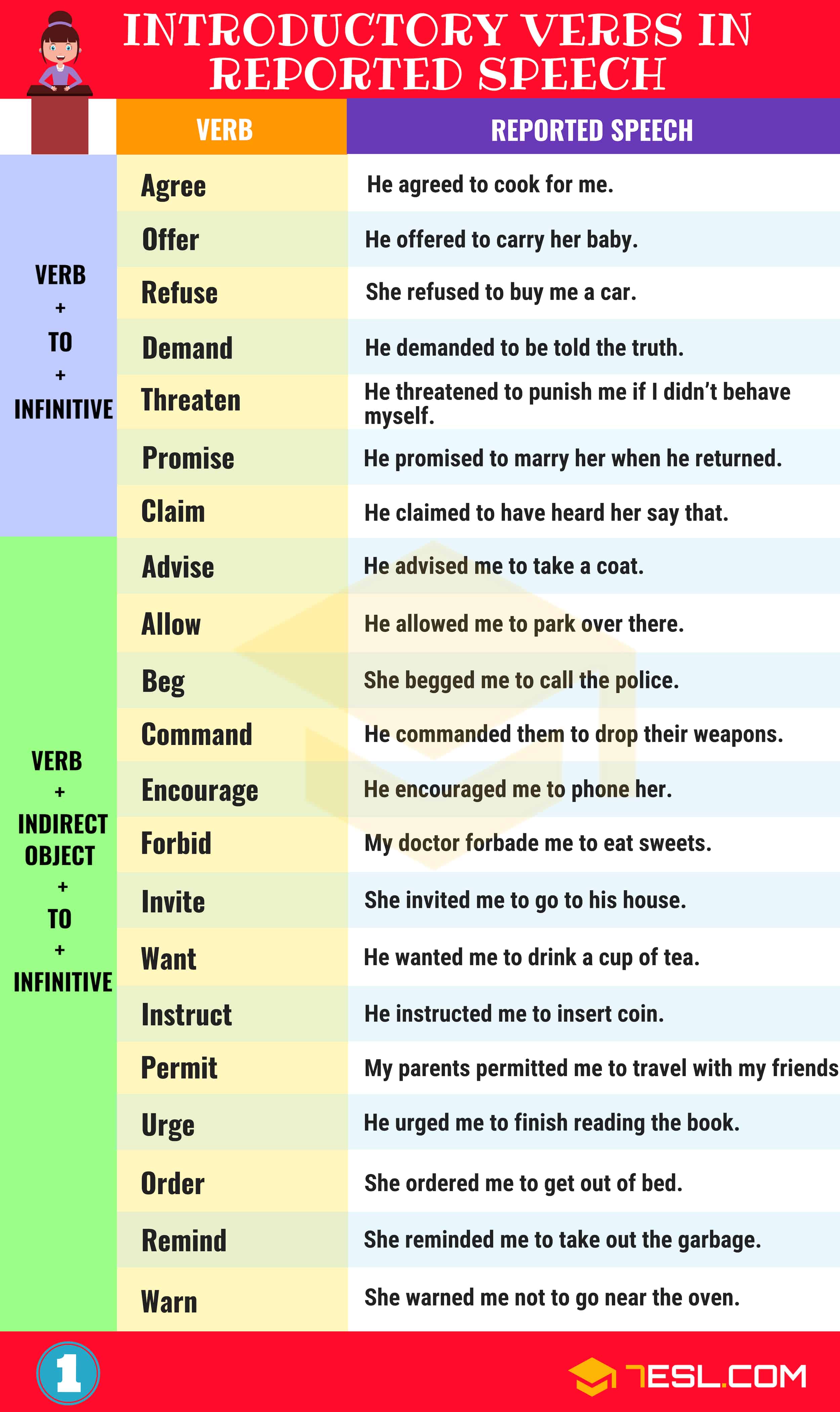 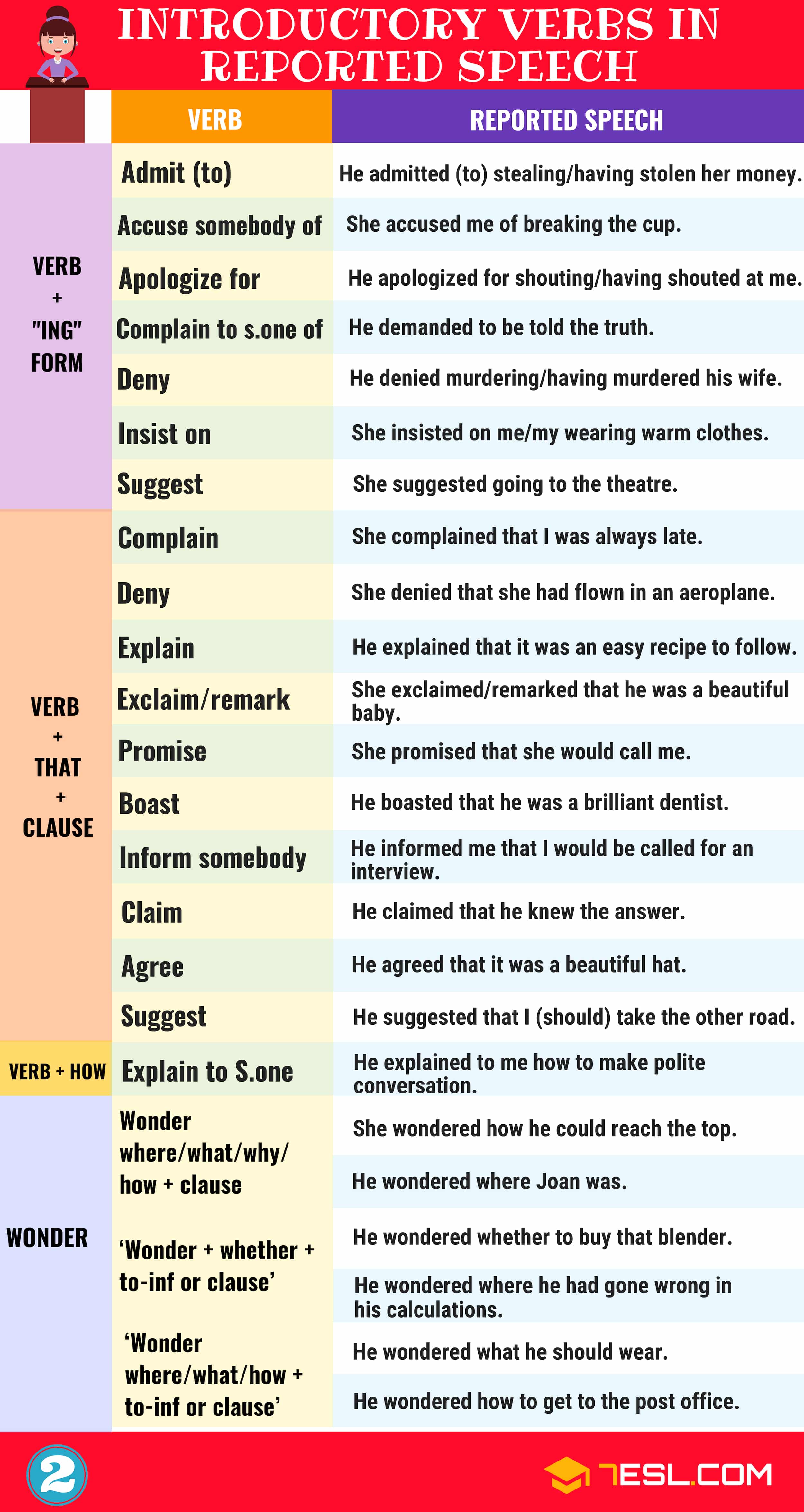 In indirect speech, you need to be careful with personal pronouns. They need to be changed according to the situation. You need to know the context. 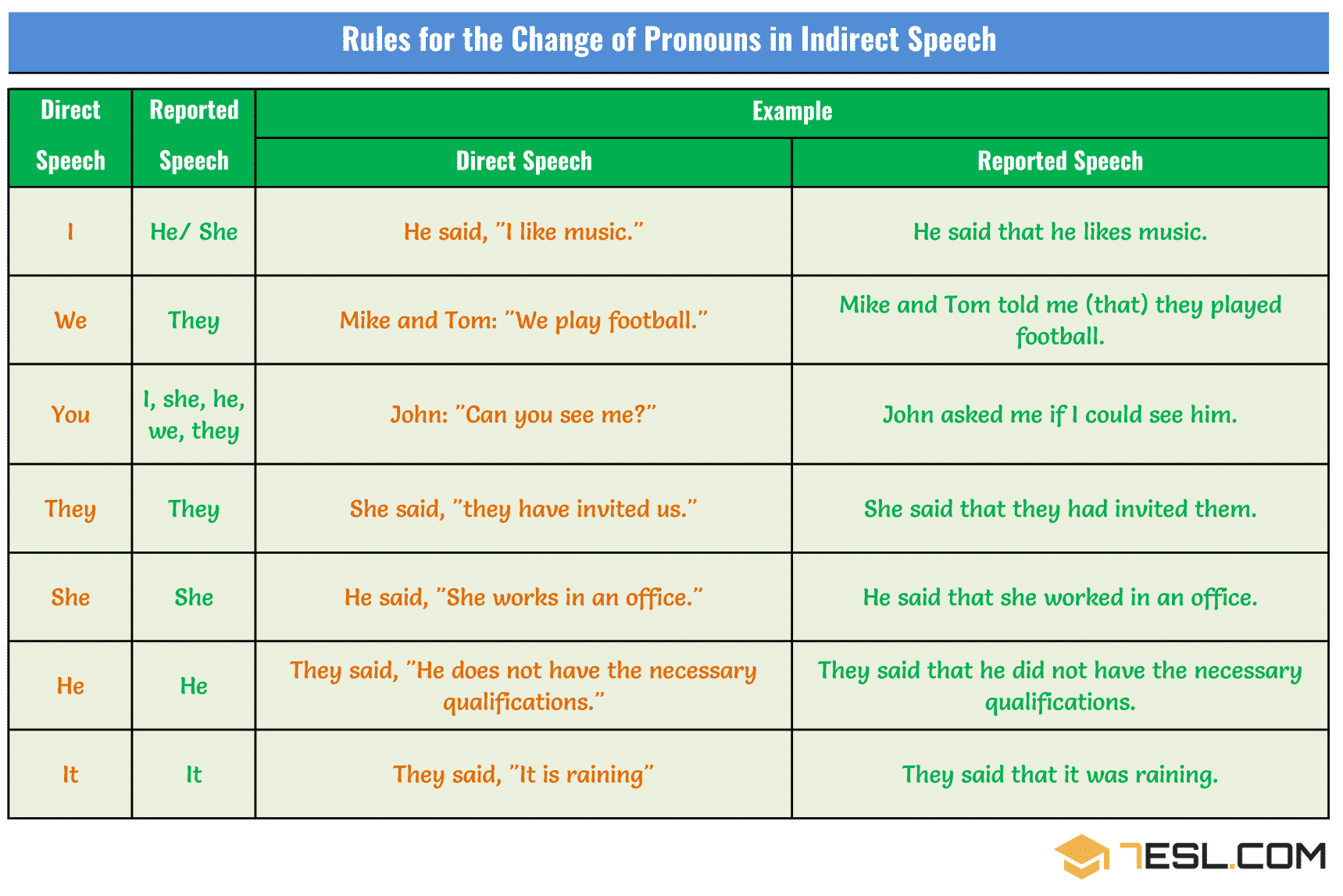 When you are changing a question from direct speech into indirect speech, you follow the same kinds of rules as for statements.

To report a question, we use verbs such as inquire, wonder, want to know, ask… 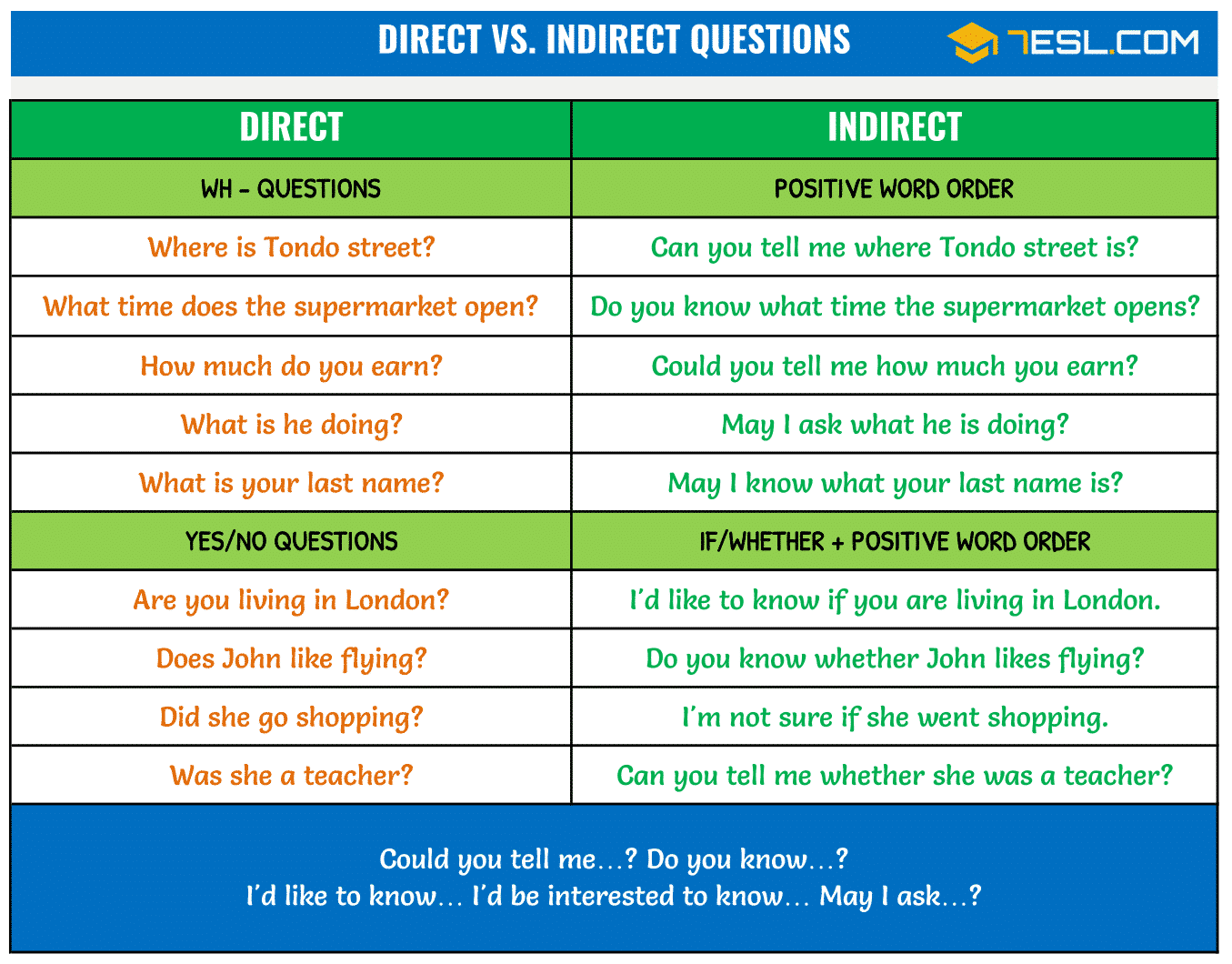 Reported Commands and Requests in English

When we change from direct to indirect speech, the pronoun and tense changes are also needed. 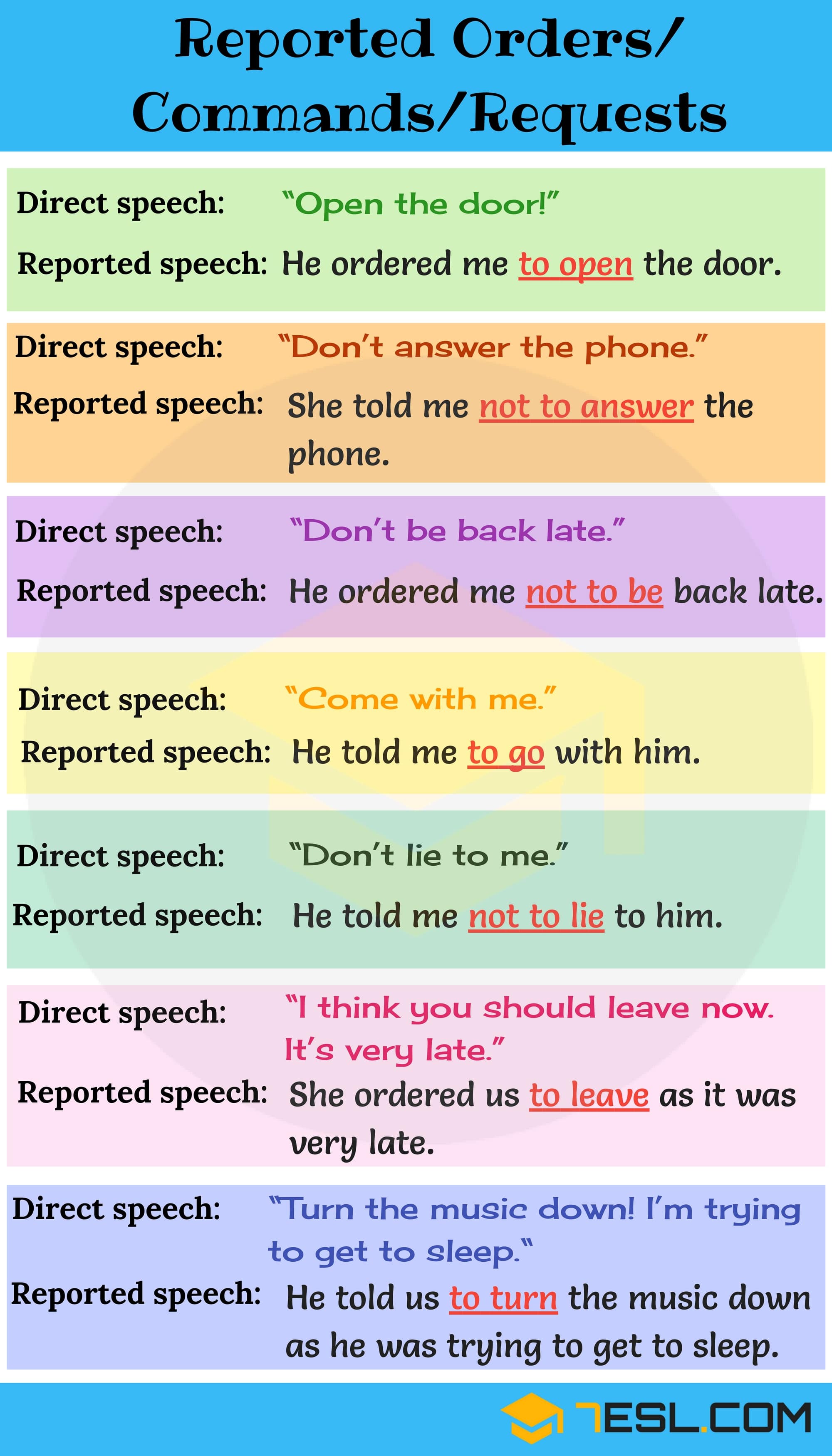 No, because it is a time clause

Sorry it will not change because it is a time clause

You have mentioned the reporting verb as ‘said’ which is past tense. If you report the same sentence 2 years later, does ‘tomorrow’ remain ‘tomorrow’ itself? It represents the same day which is your ‘tomorrow’ in the report and reports are made to provide the news to the readers. If ‘tomorrow’ doesn’t change, what do the readers understand? Don’t they assume that the exact report is of the same day that they are reading the news on?

Your ‘this’ also has remained ‘this’ itself. If you have to report it after 5 days, ‘this’ has to change into ‘that’. Will you say now ‘this’ also remains itself ‘this’ because ‘this’ is a demonstrative pronoun? LOL

More examples joined in this

idont undrstand can you clarfil plez

wt do u mean u dont understand

lol i am addicted to this web l**o