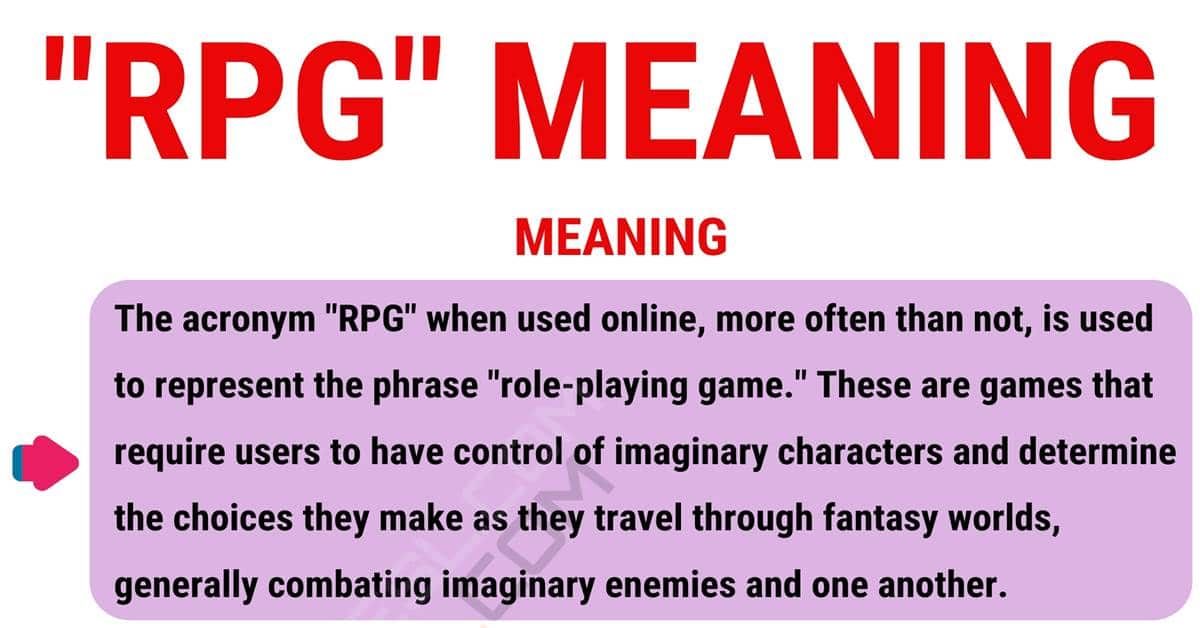 More than likely, when you hear or see the acronym “RPG” being used online it represents one of the popular phrases for this acronym. If wondering what this acronym meant is what led you here, then keep reading below. The meaning of this acronym can be found here, along with information regarding its origin if there is any available, and some other possible meanings. You will also find some conversation examples featuring this acronym used correctly. The article will draw to a conclusion by highlighting some synonyms you can use in place of the acronym “RPG” in conversation.

What Does RPG Mean?

The acronym “RPG” when used online, more often than not, is used to represent the phrase “role-playing game.” These are games that require users to have control of imaginary characters and determine the choices they make as they travel through fantasy worlds, generally combating imaginary enemies and one another.

“RPG”s have been in existence since the 1970s. When the internet came about, these games were developed for online play connecting fans of role-playing games worldwide so they could play with one another. The first role-play game for any video game console debuted in 1982 on the Atari 2600 and was called Dragonstomper. Since 1982, RPGs have become popular among players of online video games and the games have evolved tremendously.

The most common alternative meaning for the acronym “RPG” is “rocket-powered/-propelled grenade.” This is a military weapon with so much firepower that it can stop tanks. However, it must be stated that although most people believe “RPG” stands for the phrase stated, that phrase is wrong. The weapon was initially made in the Soviet Union and represents the phrase “Ruchnoi Protivotankovye Granatamyot” meaning “handheld antitank launcher.” There are even more businesses, organizations, and things represented by the acronym “RPG” and there are way too many to list them all here. Some of these other things include “Rebounds Per Game,” “Rules For Posting,” “Random Password Generator,” “Risk Purchasing Group,” and “Research Program Grant.”

A text between two people who know each other well.