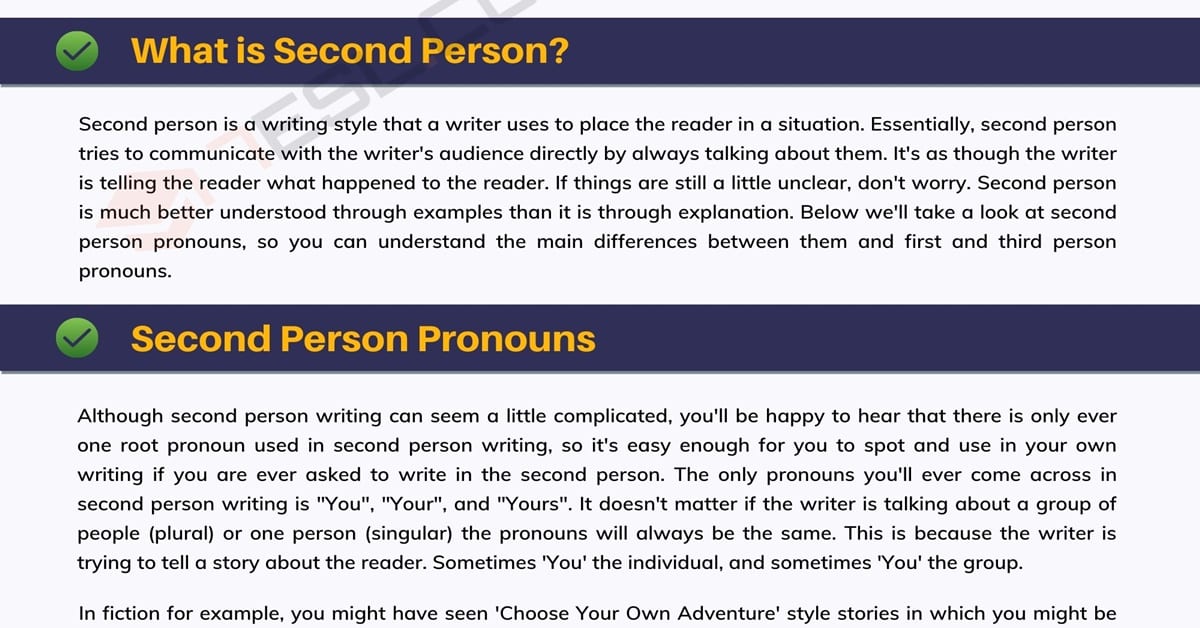 Although it is less common than first and third person in writing, you really ought to understand the second-person point of view and what exactly it means, because you never know when you might be asked to identify it or even write in second person yourself. So, we’ve put together a helpful guide explaining everything you need to know!

What is Second-Person Point of View?

The second-person point of view is a writing style that a writer uses to place the reader in a situation. Essentially, second person tries to communicate with the writer’s audience directly by always talking about them. It’s as though the writer is telling the reader what happened to the reader. If things are still a little unclear, don’t worry. Second-person point of view is much better understood through examples than it is through explanation. Below we’ll take a look at second-person pronouns, so you can understand the main differences between them and first and third-person pronouns.

In fiction, for example, you might have seen ‘Choose Your Own Adventure’ style stories in which you might be told to turn to a certain page after making a certain choice. Usually, you’ll see sentences like “You unlock the door with the skeleton shaped key. A roar breaks out from the room in front of you. You try to run, but your path has been blocked.“.

You see, the writer is putting you in the driving seat of the story. You are making the decisions and it is you that is supposed to be the main character. If that seems a little confusing still, then why not take a look at that sentence again from a first-person point of view, and then a third-person point of view.

If we take the same sentence from above and try to turn it into first person, we need to change the main character to the writer. Remember, first-person point of view is somebody recounting what happened to themselves. So, it’ll look something like this:

It’s easy to understand which style of writing it is if you just ask yourself ‘who is the main character?’. If it’s the person telling the story, it’s first person, if it’s the reader, then it’s second person point of view.

If we try to change that sentence into third person, we need to change the main character again. Third person is somebody recounting a story about what happened to somebody else. So, it would look like this:

Let’s take a look at some more second person writing examples so you get used to the sort of sentences you might read and write in the second person, or even hear in conversation or speeches.

Examples of Writing in Second Person

“Your heart started to beat the moment you looked through the door. It was obvious. You were in love; you wanted them to be yours.” The writer in this case is telling a story about the reader. They are trying to put the reader in an imagined scenario directly. This writing technique is often used as a way of making a reader feel more connected to the story. Remember in second person writing you should always look for “You”, “Your”, and “Yours”.

“You didn’t study for the test. It’s your own fault that you failed. You haven’t been trying hard enough.” This is an example of speech that you could hear in a classroom for example (although we hope that teachers aren’t quite so cruel). Here the teacher we have imagined is telling the listener’s story for them. The teacher is trying to recount a story about the listener. It work’s in exactly the same way as it does in fiction writing, and the teacher is probably using this technique to make the listener feel more connected to what they are saying so they don’t fail the next test.

When using second-person point of view in speech or in writing, for fiction or for non-fiction, the purpose is almost universally the same: to make the reader or listener feel more connected to what you are saying. You’re trying to put them in the driver’s seat so they have to listen or read a little more actively.

Hopefully this guide has helped you to understand second-person point of view a little more!