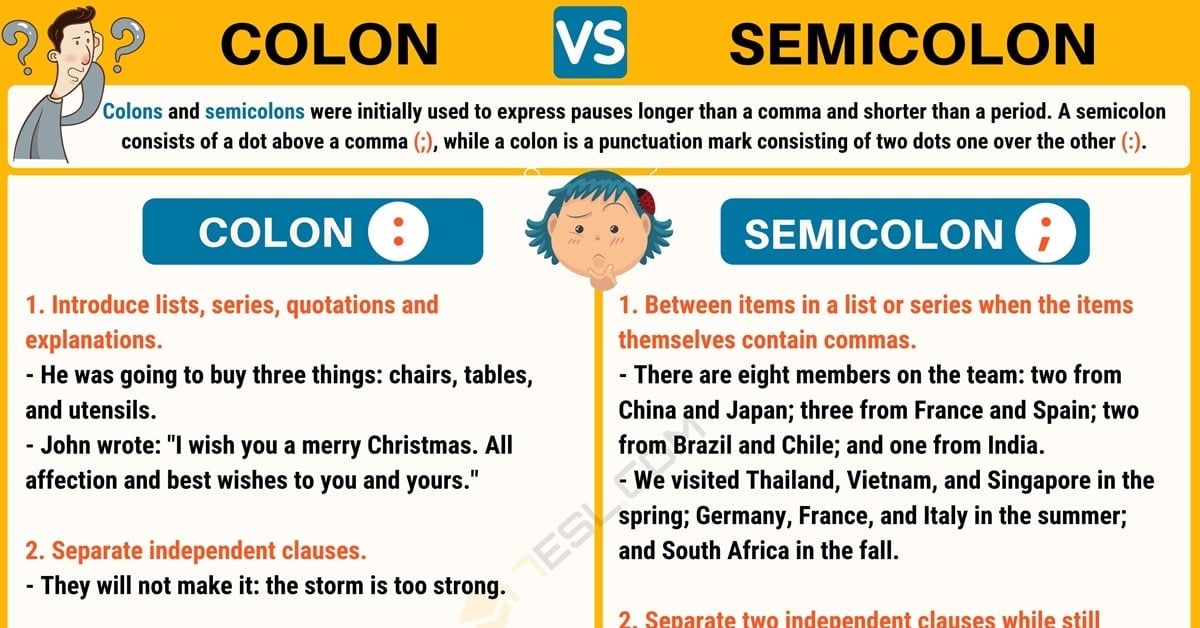 Semicolon vs. Colon! Semicolons and colons are punctuation marks with separate functions. A colon precedes elements or multiple elements that illustrate the previously provided information. In contrast, a semicolon indicates a connection between two distinct independent clauses.

What is a Semicolon?

What is the symbol (;) called in English? It is called a semicolon which consists of a dot above a comma ( ; ).

A semicolon is mainly used to separate two independent clauses while still demonstrating that a close relationship exists between them. The semicolon does a better job of showing the connection between two statements than a full stop would.

When to Use a Semicolon with Examples

1. We use a semicolon between items in a list or series when the items themselves contain commas.

2. We use a semicolon to join two independent clauses that are not connected with a coordinate conjunction.

A semicolon is used to separate two independent clauses while still demonstrating that a close relationship exists between them. The semicolon does a better job of showing the connection between two statements than a full stop would.

What is a Colon?

What is the symbol (:) called in English? It is called a colon which is a punctuation mark consisting of two dots one over the other ( : ).

A colon is a fairly common punctuation mark with a varied number of uses. It can be used to introduce a quotation, an example, a series, or even an explanation. Secondly, it can be used to separate two independent clauses. Finally, a colon can be used to show emphasis.

When to Use a Colon with Examples

1. We use colons to introduce lists, series, quotations, and explanations.

A colon is used to announce, introduce a list, a quotation, and before a final clause that explains something in the sentence.

Examples of colons with lists, series:

Examples of colons with quotations:

2. We use colons to separate independent clauses.

3. We use colons to show emphasis.

4. We use colons to separate units of time.

Examples of Colons and Semicolons in Sentences

Colons precede lists. The information before the colon introduces a type of list. You would interrupt the colon as meaning “and they are”. For example:

The colon indicates that a list of the types of ice-cream in the dispenser is forthcoming. The colon replaces the need for writing “and they are” before vanilla, strawberry, and chocolate.

You can also signal the clarification of a specific concept with a colon.

The colon silently communicates these choices without having to use the words “and they are.”

Colons can introduce quotations. You can use quotes to clarify a statement.

When using a conductive adverb to join two independent clauses a semicolon needs to precede it. Some examples of conjunctive adverbs include, however, otherwise, and finally.

American vs. British Usage of Colons and Semicolons

British English users do not use a capital after a colon. This in contrast to American English users. American users capitalize the beginning of the word that follows the colon if it precedes an independent clause.

British and American semicolon usage is the same. Words following a semicolon are not capitalized unless they describe a proper noun or appear as part of an acronym.

Common Mistakes Using a Colon vs. Using a Semicolon (and How to Avoid)

Alternatively, using a comma instead of a semicolon leads to a comma splice.

Sometimes people place a semicolon where they should place a colon. People get confused with how to use the two in lists. A colon introduces a list of elements. In contrast, a semicolon only separates elements within the list.

People often forget that colons cannot separate verbs and objects or subject complements. Nor can colons disconnect a preposition from its object. Also, when writing you do not separate subjects/ predicates and noun/verbs with colons.

Wrong       The three places I wanted to go were: Denmark, China, and Canada.

Dashes are usually not grammatically necessary, unlike colons and semicolons. Dashes are primarily used for 4 reasons. They provide emphasis and break up dialogue. Dashes indicate a sentence conclusion or introduction. In addition, dashes highlight additional words or phrases not necessary for the meaning of a sentence. Commas usually surround these additional words and phrases. Using dashes can help break up the text when too many commas are already at play.

Learn the differences between a colon and a semicolon in English with this useful table. 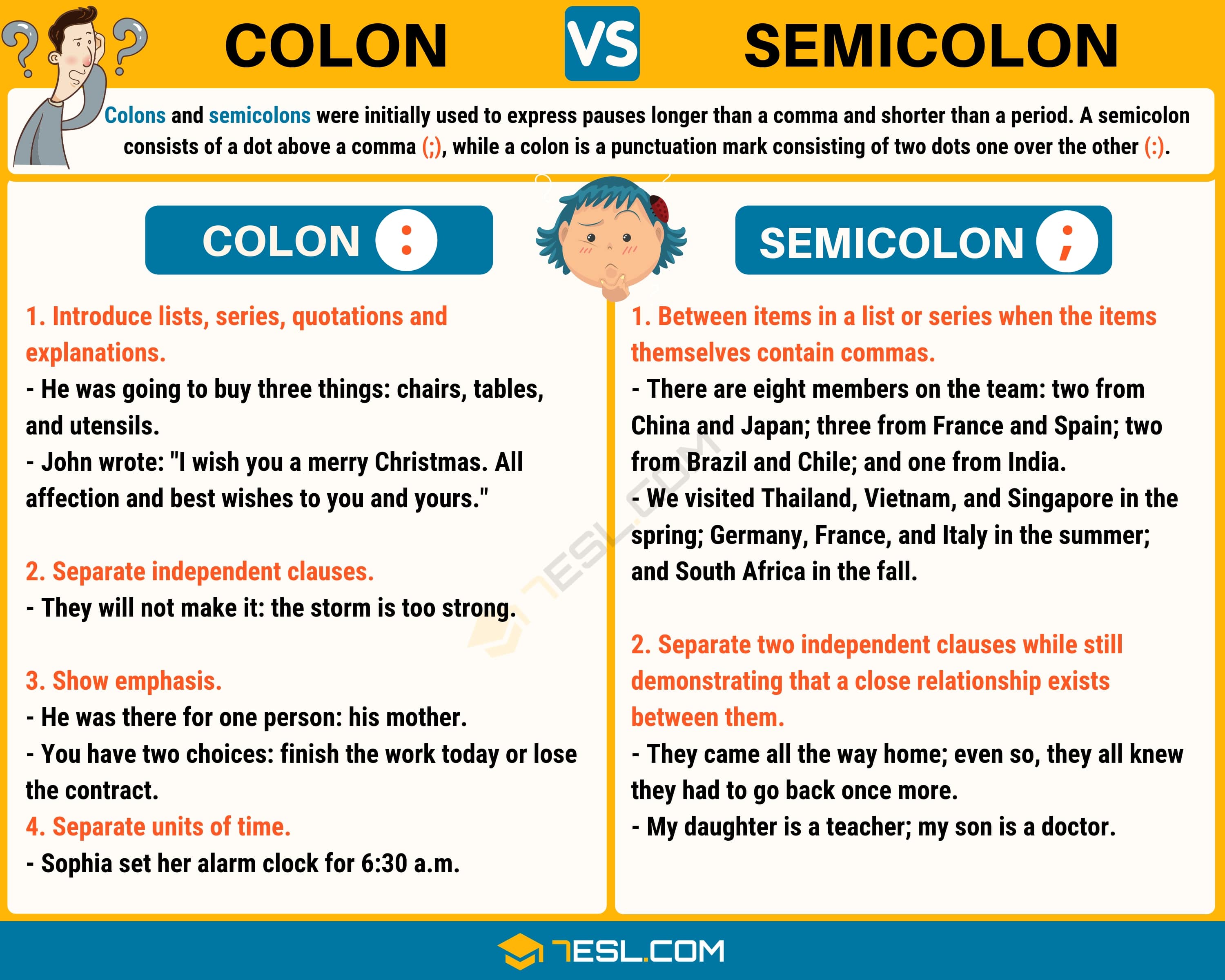 Circle the correctly punctuated sentence in each question.

This is why mom doesn’t love you ER BUI

Hey Guest
-Someone who doesn’t have any relation with you

thats my sister u ashol

who wants to talk about games🎮🎮:)

Cody did not know colon and semi colon

we are dude perfect

we make you tube videos