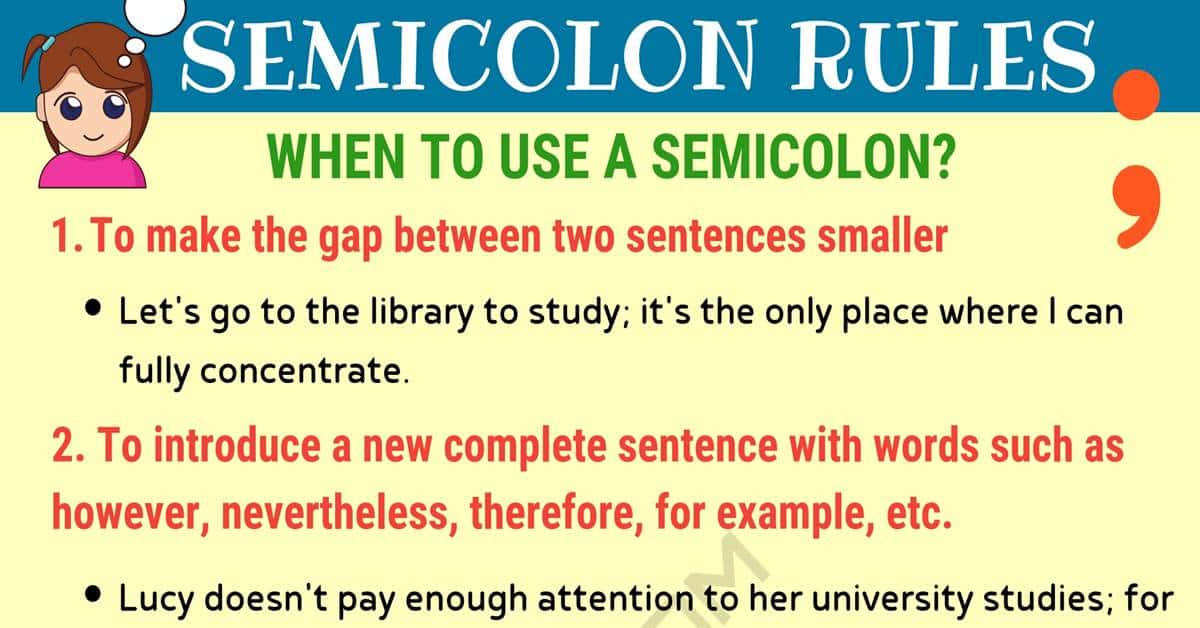 Much like colons, semicolons can become a little confusing. So, we’ve put together this helpful guide that should tell you everything you need to know about what they are, when you should use them, when you shouldn’t use them, and provide you with some key points to remember so you never forget the correct use of a semicolon again!

Understanding semicolons is a difficult thing. So, we’ll take you through different cases of using semicolons correctly and incorrectly, discuss some more nuanced rules surrounding them, show you some more examples, and then quiz you on everything semicolon related to see how you get on. Sound good? Then read on!

A semicolon is a punctuation mark that is used to separate complicated information in a list, or it is used to link two independent clauses that refer to similar ideas together. It is quite similar to the colon (:) but it looks slightly different (;) and it has some unique uses too.

What Is A Semicolon?

A semicolon (;) looks like a full stop on top of a comma and, in fact, it has some similarities with both of these punctuation marks. However, it can’t be used to replace either one of them. In addition, even though it looks a lot like a colon (:) and even has a very similar name, their uses in a sentence also differ significantly.

Writers turn to semicolons most often when they want to create a pause in the text; this pause will be longer than the one created by a comma but shorter than the one caused by a full stop. A semicolon also has a variety of other important functions. So, if you aren’t sure about semicolons, there’s no need to be scared or to try to only write texts with commas and full stops, avoiding it. After reading this article you’ll be able to confidently insert the marks (;) into any piece of writing you produce.

Learn more about the difference between a colon and a semicolon.

Key Points to Remember When Using a Semicolon

When To Use a Semicolon

As we’ve already mentioned, there are really only two reasons you would need to use a semicolon:

1) As part of a list that is more complicated because it provides additional details.

2) To join two independent clauses that have a similar theme or idea but could work separately as two sentences in their own right.

Unlike a colon, which is usually used to introduce the list, a semicolon is used to separate information within a list. Here’s an example of a list that would simply require a colon and commas to be properly punctuated:

Because it is a simple list above, a colon and commas work just fine. If they provided additional information about each individual item in the list, it would need semicolons instead. Like this:

Notice how a colon was used to start the list, but a semicolon thereafter. That’s because typically in lists, it is the commas that a semicolon replaces, not the colon itself. Although it would have been grammatically correct if you removed the emphasis in the first part of the sentence to write something like this:

Because we have removed the emphasis of the list style (“three items”), you can just use semicolons without a colon being necessary.

Just like a colon, you can use a semicolon to join two ideas together. The difference is, a colon is used to emphasize the second part of the sentence after the colon, but you use a semicolon to show that the ideas are connected and are of equal weight in terms of their importance in the sentence. Here’s how it would work:

The semicolon here shows that it connects the two independent clauses, and they are equally important. If we wrote it like this:

We would show that the second part of the sentence was more important than the first, which might not be the message we want to send to our readers.

Remember when using a semicolon to connect two ideas together, we are saying they are equally important ideas of the same value.

When Not to Use a Semicolon

The most common mistake that people make is when they use a semicolon in place of a colon or comma. These are the two major ways you will accidentally misuse a semicolon. So, we’ll highlight the differences so you don’t make the mistakes that most people do.

This is the most common mistake to make, because they are so similar in terms of how they look, and in how they function within a sentence. The easiest way to remember the difference is that you should only use colons to introduce lists, but you can use semicolons as part of a list. When connecting two independent clauses as in the examples above, colons show emphasis, and semicolons show equality in terms of their importance.

The second most common mistake writers make with semicolons is mixing them up with commas. This is most common in lists following a colon. If the information in the list is complicated because it supplies additional information, then a semicolon is necessary. You use a comma when the list is simple. Here’s how they would both look correctly:

If you have a dependent clause in a sentence, don’t use a semicolon. The reason is pretty obvious: you simply don’t need to separate a dependent clause from an independent one that much. In fact, if you make such a big pause that a semicolon suggests, you’ll only make your writing more confusing. Nothing more than a comma is needed.

When To Use a Semicolon | Image 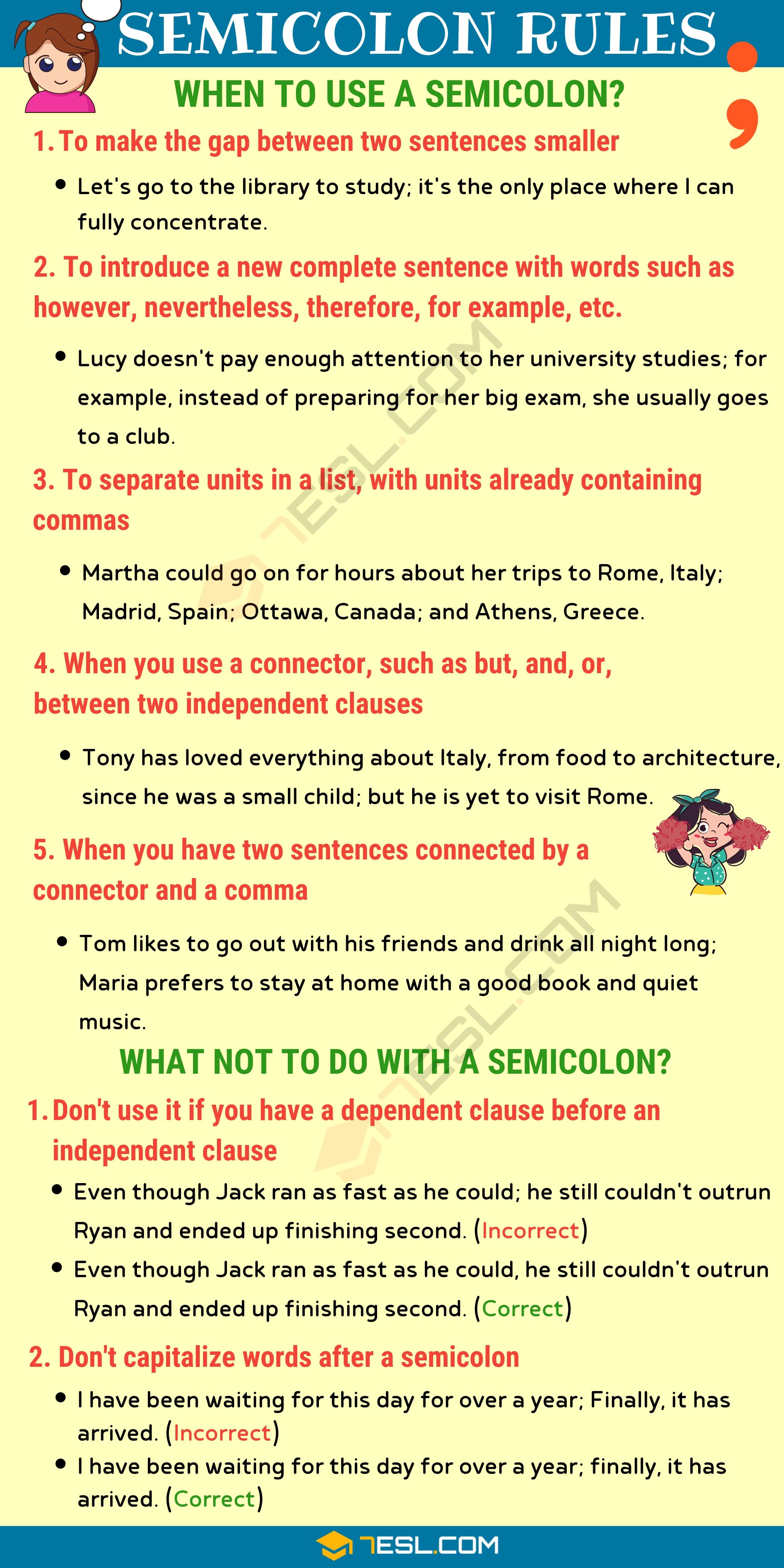 Should You Capitalize the First Letter After a Semicolon?

You shouldn’t capitalize the first letter after a semicolon unless it is a proper noun. Treat the semicolon like a comma and follow normal grammatical rules after placing one.

Don’t capitalize words after a semicolon!

Semicolons vs. Colons vs. Dashes

Hopefully, we’re now pretty clear on colons and semicolons. But we might need a quick refresher on dashes to know when we should use them.

First off, dashes only replace colons and semicolons when connecting clauses. Dashes will never be appropriate in a list. To decide whether you want to replace a colon or semicolon with a dash, ask yourself how formal or informal the piece you are writing is. We use dashes to show a more informal tone, or to create an extra emphasis on the moment of surprise or drama in the sentence. It comes down to a writer’s own decisions again here, it’s up to you whether you think a dash is more appropriate. If you’re writing academically or at work, it’s best to stick with a colon or semicolon.

How To Use a Semicolon with Quotation Marks

Now that you can be confident with how semicolons work in sentences and what their functions are, there’s only one question remaining: what happens if you have both a semicolon and quotation marks?

This is important enough to look at separately from the above section. You can use colons to introduce quotations, but you can’t use semicolons for this. However, sometimes you might find that you need to use a semicolon right after a quotation, so where does it go then?

Here you show that “most serious” was the quote the doctor used, but you then connect that idea to the second part of the sentence. You should always include semicolons outside of the quotation marks, and never to introduce a quote. When introducing a quote, use a colon.

Common Semicolon Mistakes and How to Avoid

As we already mentioned, the most common mistakes are almost always to do with mixing semicolons up with either colons or commas. So we’ll inspect those again with some specific examples for you to see why it is wrong, and we’ll remind you briefly about how you can remember to avoid these common grammar mistakes.

In Place of Colons

There are two reasons that you should use a colon to connect ideas: to emphasize the second idea over the first, or to connect with a dependent clause. With semicolons, only use them to connect two independent clauses that are equally important. In both cases, the two ideas should relate to one another.

You should also use colons to introduce a list, and semicolons as part of a complicated list where additional information has been provided about the items. So, look at these examples and see if you can spot the problems based on the rules we have discussed:

2) I’m heading to the park after work: it’s Christmas in a few weeks. (Incorrect)

3) I’ll need you to pick up these five things; my lunch, my water bottle, my stapler, my pen, and my laptop. (Incorrect)

Did you spot all the problems? Here are all the mistakes that were made.

1) The first one should have been a colon, because ‘chicken tonight’ is a dependent clause. Like this:

2) This one was a trick to see if you remembered the fundamental part about colons and semicolons: the ideas must always be related! Because they are not in this case, a period is better used:

In Place of Commas

Second, we use commas in simple lists, and we use semicolons in lists with additional information. See if you can spot the problems below:

1) I like ice cream; but my sister prefers candy. (Incorrect)

2) I need four things from the store: cheese; wine; bread; and chicken. (Incorrect)

Here’s what was wrong:

1) We’ve used the coordinating conjunction ‘but’ so we need to use a comma, not a semicolon. If we didn’t use ‘but’ then a semicolon would be fine. Here’s how we might write them both correctly:

2) The list isn’t providing any additional information, so we should use commas. If we added more information, then we could use semicolons instead. Here’s how they’d both look:

Examples of Semicolons in Sentences

Now that you know everything there is to know about semicolons, we thought we’d put you to the test. Below are some examples of semicolons being used in a sentence. Decide if they are correct or not and see if you can correct them yourself if you think they are wrong.

1) To make this cocktail, you will need these four things: gin; lemonade; rum; and ice.

2) Lily walked the long way home; so she could see the beach.

4) Sally asked me to grab a few things from work for her: her photograph of her family; her old laptop with her files on; and the box of papers on her desk.

5) I needed to remember three things from the store; sausages for breakfast tomorrow; eggs to go with them; and tomato soup for lunch.

1) Incorrect! The list is simple, so commas are all that is needed:

2) Incorrect! The coordinating conjunction ‘so’ is used. You need to either use a comma, or remove the conjunction:

3) Correct! It joins two independent clauses that are related and equally important!

4) Correct! A colon is used where it is made clear that a list will follow, and we use a semicolon afterwards because each item on the list has additional information.

OK, we were mean on this one. BUT, a colon should start the list because we emphasised that a list was going to follow in the first part of the sentence. Technically, it should look like this:

I am doing my secion!”

What is a type of toy you want

Hi I am good Rula