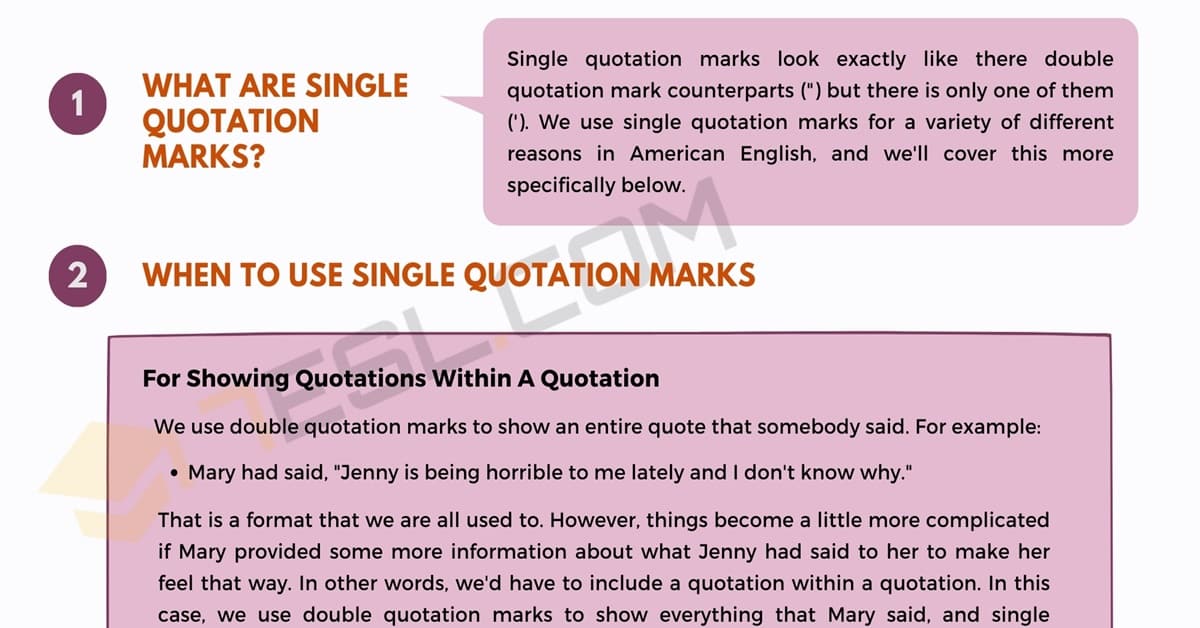 This guide will take you through everything you need to know, from what they are, when to use them, and common mistakes we see with single quotation marks all the time. We’ll also discuss British and American differences (they are big in this case) and then finish on a quiz like always!

What are Single Quotation Marks?

When to Use Single Quotation Marks

For Showing Quotations Within A Quotation

We use double quotation marks to show an entire quote that somebody said. For example:

That is a format that we are all used to. However, things become a little more complicated if Mary provided some more information about what Jenny had said to her to make her feel that way. In other words, we’d have to include a quotation within a quotation. In this case, we use double quotation marks to show everything that Mary said, and single quotation marks to show just what Jenny had said to Mary. So it might look something like this:

When Not to Use Single Quotation Marks

The most common mistakes that occur with all quotation marks, not just single, is an inconsistency in style. For example, if the following sentences appeared in the same piece from the same writer, it would be incorrect:

You notice the difference? They’re inconsistent. If you use double quotation marks for the entire speech, and single quotation marks for quotes within quotes, then this is the style you should stick to. But why would you mix them up anyway? Well, that’s where American vs British English comes in, and it’s probably why there is so much confusion around quotation marks to begin with.

British English uses single quotation marks most often to show the entire quote. Like this:

And for quotes within quotes? You guessed it, British English uses double quotation marks, like this:

Below, you must decide if the following sentences are correct or incorrect. If they are incorrect, then how should they be written? In the interest of fairness, we will test the American English way, as those are the rules we’ve focussed on most.

2. Incorrect. In headlines, we should always use single quotation marks. They do the same in British English, too. So it should be:

Nice post, it really provides clear idea between single and double quotations. Thanks

Someone who is too proud of her knowledge of English said recently, “Titles of an Art Work need not be written with either single inverted comma or double inverted comma, but writing the same in just ITALICS is correct way nowadays. ” Can the article writers or anyone else, provide an authentic answer, preferably with a reliable reference of a book or so to prove the correct usage? Example of what was being discussed is below to be used for a catalogue containing artists’ works. ‘Guernica’ Pablo Picasso, oil on canvas Her idea is that Guernica (or any title) should… Read more »