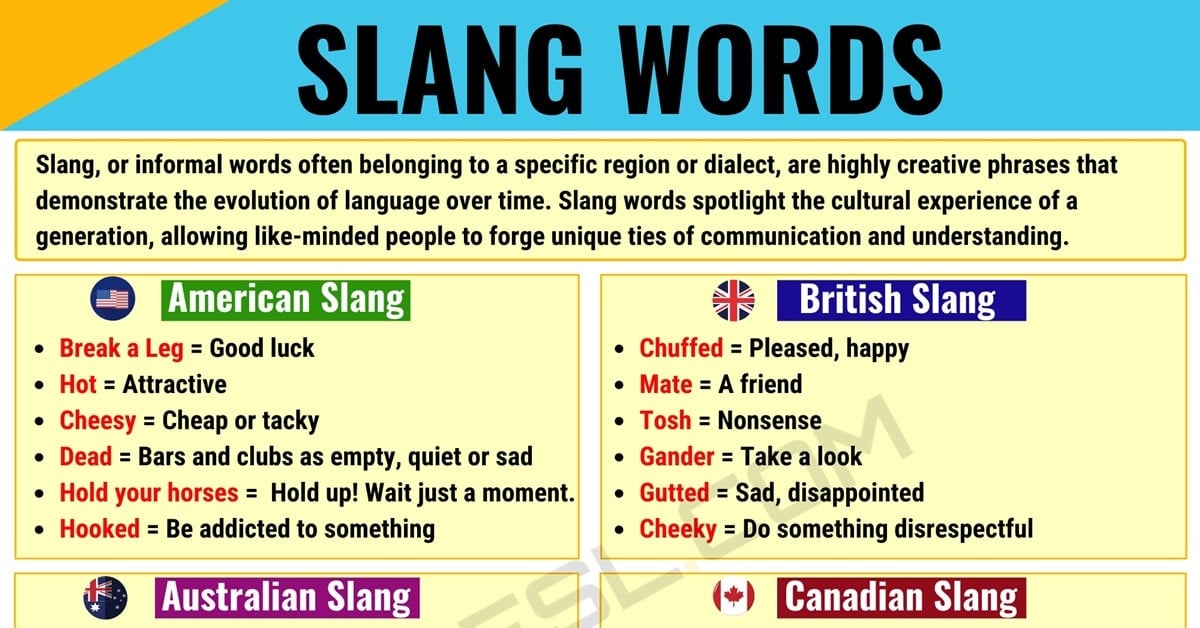 What are slang words? Here you will find thousands of common slang terms, including internet slang, American slang, British slang, Canadian and Australian slang words, with meaning and useful examples.

Anyone who has ever learned another language knows that you begin with the basics: verb tenses, common phrases, grammatical structure, word syntax. That’s because you have learn all the rules before you can break them.

While that may be true, there’s something to be said for all the “inappropriate” or “incorrect” usages of language. Slang, or informal words often belonging to a specific region or dialect, are highly creative phrases that demonstrate the evolution of language over time. Slang words spotlight the cultural experience of a generation, allowing like-minded people to forge unique ties of communication and understanding. Because slang terms are often understood by select populations in specific areas of the world (especially sub groups within majority cultures), they showcase a sense of belonging, and simultaneously act as a means of maintaining identity.

Slang words have also been coined by people responsible for shaping history – authors, poets, artists, musicians, soldiers and protesters – who continue to impact us today. Art, literature, history, entertainment and advertising are all packed with slang words which add passion, meaning and intensity to our everyday lives.

How to Learn Slang Words

Therefore, while you might focus on learning a new language “properly” (as you should), truly understanding a language means mastering every aspect of it. This includes slang words, idioms and regional dialects. So, how do you learn slang? Slang is typically learned outside of the classroom for a reason. It’s learned through cultural immersion, perhaps by visiting a foreign country and spending time in local bars and restaurants. You can also hear foreign languages in real-world contexts by watching subtitled TV shows and movies.

If you’re a native English speaker, try listening to a favorite sitcom (like Friends or Seinfeld) in French or Spanish while reading English subtitles. Who knows? You might gain a richer appreciation of Joey’s speech mannerisms or Kramer’s ridiculous responses. Another way to learn slang words is to read them online, as the internet is full of slang. And for the truly ambitious, there are plenty of online resources, like classes and books, that you can thoroughly immerse yourself in in order to understand the ins and outs of language.

With 1.5 billion speakers worldwide, English is the most widely spoken language. And in our current Technology Age, English has assumed the dominant language of global communication on the internet. But that doesn’t mean English sounds the same wherever it’s spoken. Some American slang terms and words can seem like an alien language to Brits and Australians – or even to other Americans, depending on your regional dialect.

In addition to internet slang, there are several types of slang words. Below, we’ll take you through just a few of the most popular ones that you’re likely to hear in some of the most widely-spoken languages.

Even if you’re not a native English speaker, use these sayings and you’ll soon be sounding the part!

It might not be the Queen’s English, but these phrases are guaranteed to familiarize you with how the Brits talk. Here are examples of British slang words you should learn:

These popular Canadian slang words will help you fit in in the Great White North.

Places like social media forums and online messaging might seem like a foreign world. But with these helpful abbreviations, they won’t feel quite so scary. Here are some example of internet slang words: 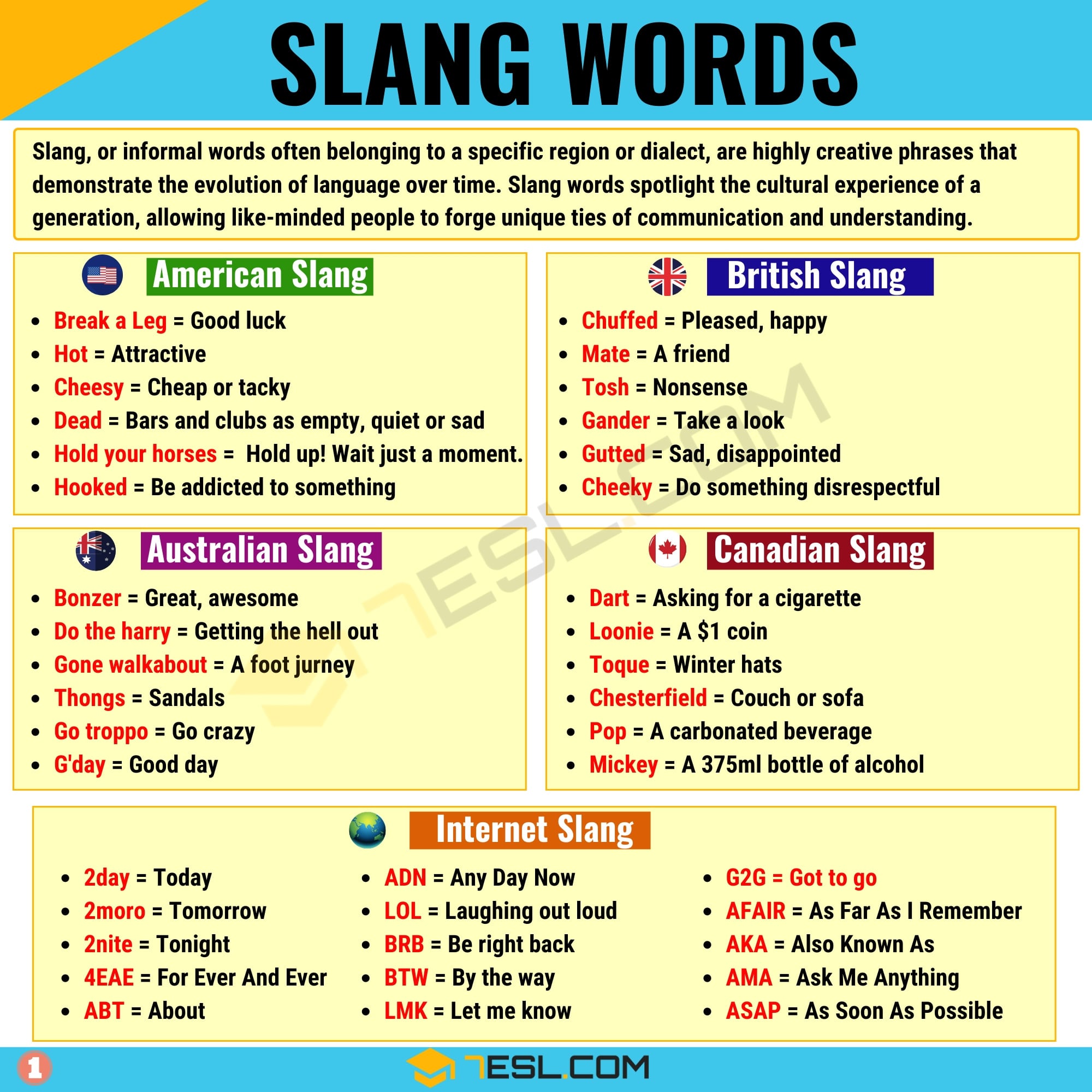 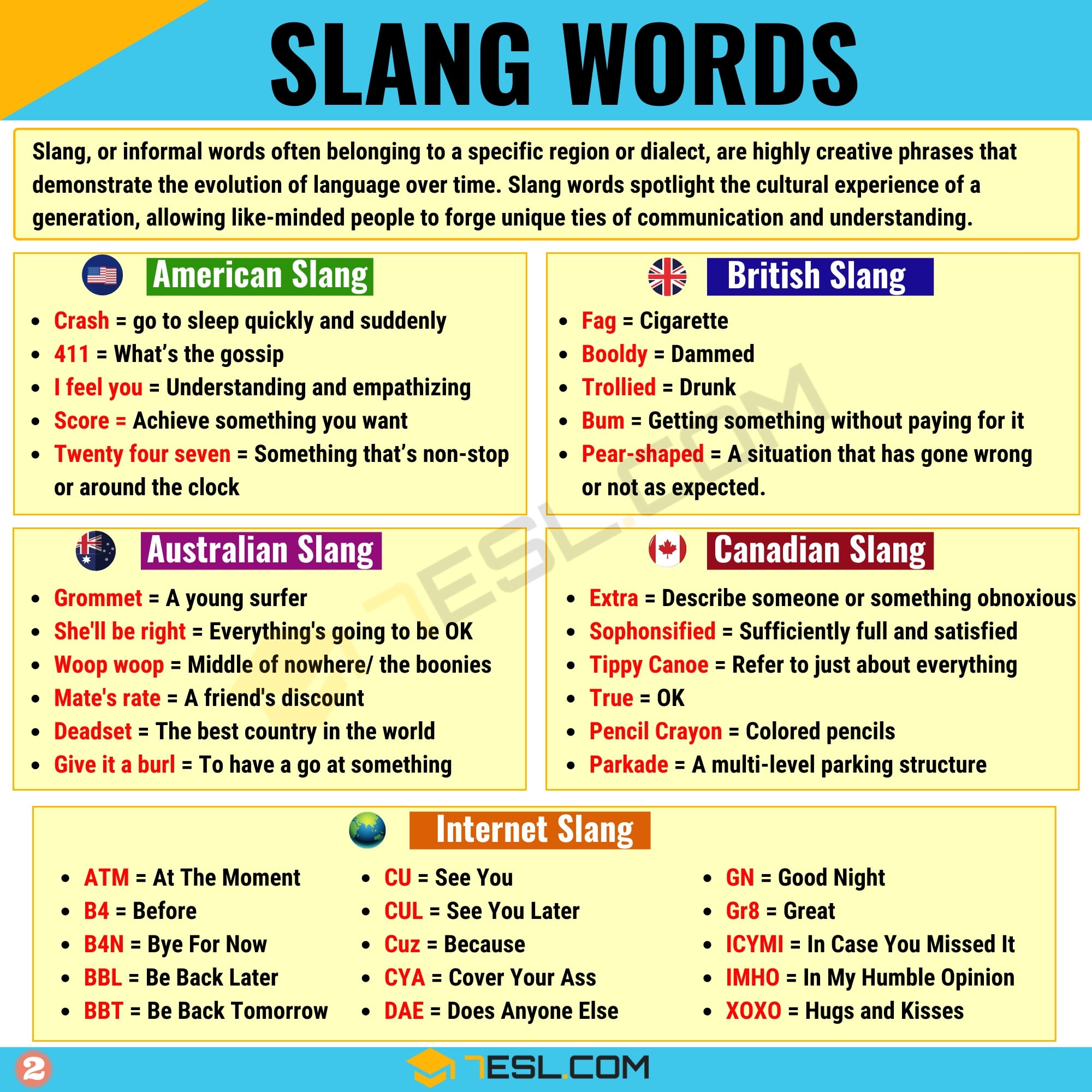 One of the best websites I have came across.

One of the best website for non-native speakers to improve their English. Loved it!