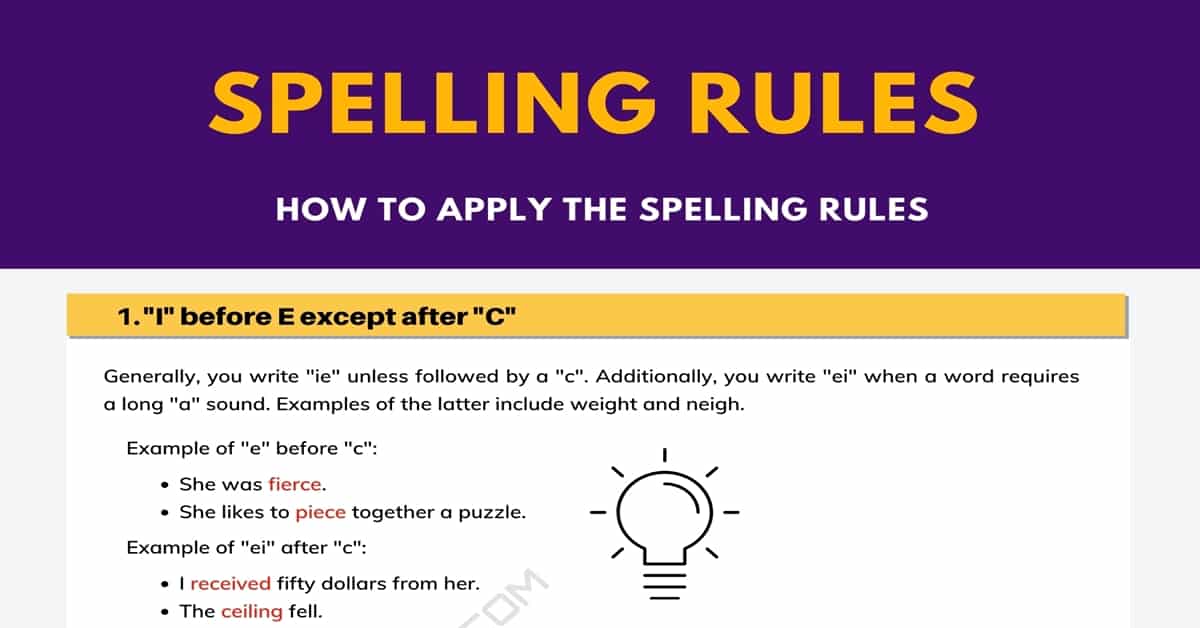 Spelling in English can be challenging. Several spelling rules exist to navigate the treacherous spelling realm. Once you think you have a handle on one spelling rule, a rule exception throws you off course. Not to mention, many archaic phonetic words are mudding the English language waters.

Have you ever wondered why some words have such peculiar spellings? When you learn the alphabet you learn each letter makes a specific sound. Yet this does not account for when letters are silent. Consider the words knife and knight. The “k” is not sounded. Instead, these words begin with “n” sounds.

Once upon a time, you would have heard the “k” pronounced in “knife”. Engish speakers dropped the pronunciation of the “k” yet the old spellings persisted. With all these elements of chaos thrown in, where do you begin?

English writers begin by learning the rules that govern most English word spellings and their caveats.

Spelling Rules at A Glance

Note: Words in the English language consist of vowels and consonants. Every word and every syllable contain one or more vowels.

How to Apply the Spelling Rules

Exceptions to the rules occur. These exceptions include words like weird, height, and either.

When a suffix begins with an “e” and the word ends in “y“ you change the “y” to an “i” before adding the ending. Suffixes that begin with “e” include ed, es, er, and est.

Suffixes beginning with the letter “e”

2 consonants with “y” and suffix “ly”

When you have 2 consonants come before “y” it is necessary to change the “i” into a “y” before applying the suffix “ly.”

Note: the word “dry” does not follow this rule when applying the “ly” suffix. You write dryly not drily.

When “e” appears at the end of a word followed by a consonant it is silent. The “e” changes how the vowel before the consonant sounds. It makes a short vowel long. In bite, the vowel “i” is long. Remove the “e” and you get a different word with a different sound. The word becomes “bit” with the short “i” vowel.

To add a suffix like “ed” to a word with a silent “e” you usually drop the “e” and add the suffix.

When pluralizing a word you use “es” after these letters or letter combos: s, z, sh, ch or x.

Most other words will use an “s” in the plural form

Note: some words do not require a change to become plural. Words like fish and sheep are examples of unchanging words in a plural form.

The suffixed word pronunciation sometimes changes, but the spelling remains consistent. For example, you can either express “blessed” as one or two syllables.

In almost all English words, the letter “u” follows “q”. You can see the “qu” combo in words like queen, aqua, and quick. In scrabble, there are some correct English words without a “u.” These include “qi” and “said”. However, no one ever uses these words in common discourse.

Thank you… I was searching for this information.