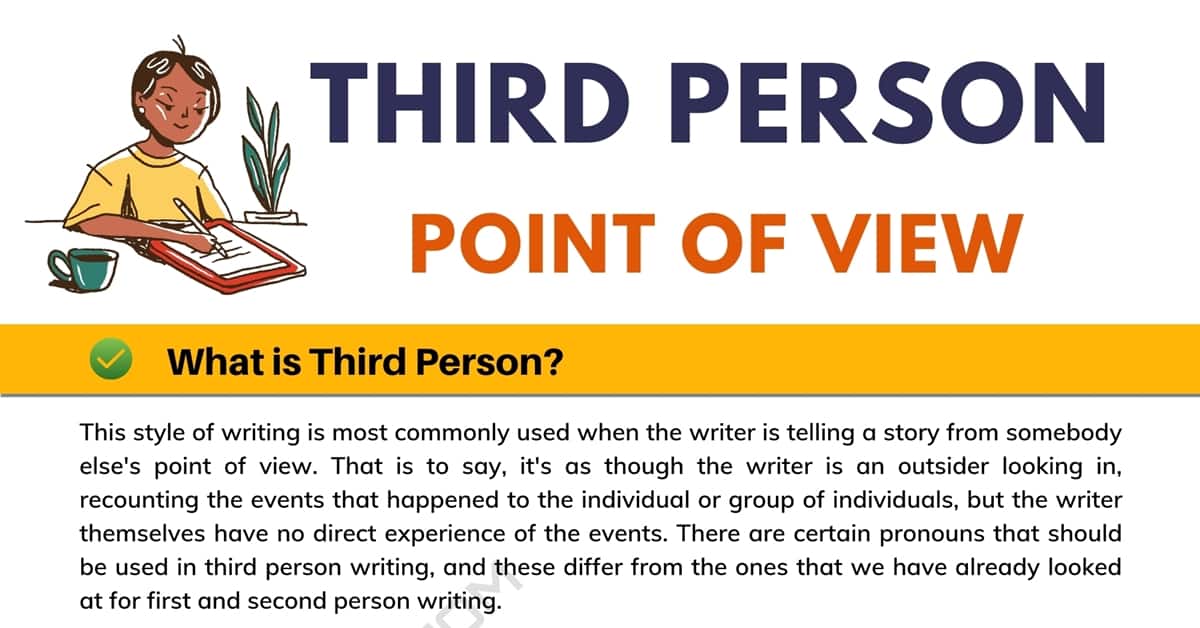 What is the third-person point of view? Third-person writing is arguably the most common form of writing that an individual will come across. But, it can still be difficult to understand exactly what it is, how to identify it in other people’s writing, and how to use it on your own. This guide will take you through exactly that, and seek to provide a clear and definitive explanation that is supported with examples. So, what is third person?

What is Third-Person Point of View?

This style of writing is most commonly used when the writer is telling a story from somebody else’s point of view. That is to say, it’s as though the writer is an outsider looking in, recounting the events that happened to the individual or group of individuals, but the writer themselves have no direct experience of the events. There are certain pronouns that should be used in third-person writing, and these differ from the ones that we have already looked at for first and second person writing.

As third-person writing is concerned with telling a story about somebody else, you will need to use pronouns that suit this style of writing. So, you should expect to see pronouns such as “She/He, Her/Him, They/Them” depending on whether they are talking about one person (singular) or multiple people (plural).

How to Write in Third Person

When writing in the third person it is key to remember that you are narrating for somebody else’s experience, but you still have to relay their thoughts, feelings, and actions in a way that the reader can relate to. Essentially, as a third person writer in fiction, you are trying to tell a story from an objective point of view, but it gives you the power of being able to know everything that happens and how the characters feel, without being in the situation yourself. It’s an excellent tool in creative writing because it allows you to tell everything from a character’s thoughts and feelings, but also provide detailed setting descriptions, etc because you are telling a story in a completely objective way.

As well as writing in the third person for fiction, you should also use third person writing in non-fiction, and especially in academic writing or writing when you need to have a more formal tone. This is because the objectivity of this style of writing allows you to stop putting too much of your own thoughts and feelings into the written piece, which should almost always be avoided in academic and formal writing because so often you need to remain slightly removed from the writing to look at things in that objective way. By removing your own thoughts on a subject, you are making you, and your writing and research, seem even more credible because you are presenting the facts as they are, not as you understand them.

Examples of Writing in Third Person

Let’s take a look at third-person writing in fiction first then. This style of writing for creative purposes will focus on somebody else. Here are some examples:

“She walked towards the closed door and lifted her hand towards the cold metal handle. As she turned the handle steadily and peeked inside, she realized that the sword sitting on the desk wasn’t just anybody’s as she had thought: it was hers.”

Above you can see the use of the third person pronouns “She”, “Her”, and “Hers”. If you want to understand this on a more technical level, then “She” and “Her” are examples of a third-person singular pronoun. “Hers” is an example of a third-person possessive pronoun, because it is talking about something that is owned by the character in this piece.

If we were looking at more than one character above, this is how the previous sentence would likely look:

“They walked towards the closed door and lifted their hands towards the cold metal handle. As they turned the handle steadily and peeked inside, they realized that the sword sitting on the desk wasn’t just anybody’s as they had thought: it was theirs.”

“Jones and Jones conducted a study in 2003 that found that monkeys like to eat bananas more than any other fruit. They placed four bowls of various fruits…”

Obviously, the above example is made up, but you can see how writing in this style makes the writer seem more credible because they haven’t spoken about what they themselves think. Instead, they are simply reporting what others have done in their research in order to present the facts in a way that creates an argument in favor of bananas being a monkey’s favorite fruit, or whatever the argument may be in an actual academic piece of writing. Whilst the above example uses the plural third-person pronoun “They”, you could likewise use the pronouns “He/She” etc. if the researcher you are discussing works alone and you know their gender.

The above guide and examples should help you spot when third-person writing has been used and hopefully provide you with some ideas about how to start using the third person point of view within your own writing. Just remember that the key to third-person writing, either in fiction or non-fiction, is to remain objective and tell the story about other people, without including your personal thoughts and feelings.