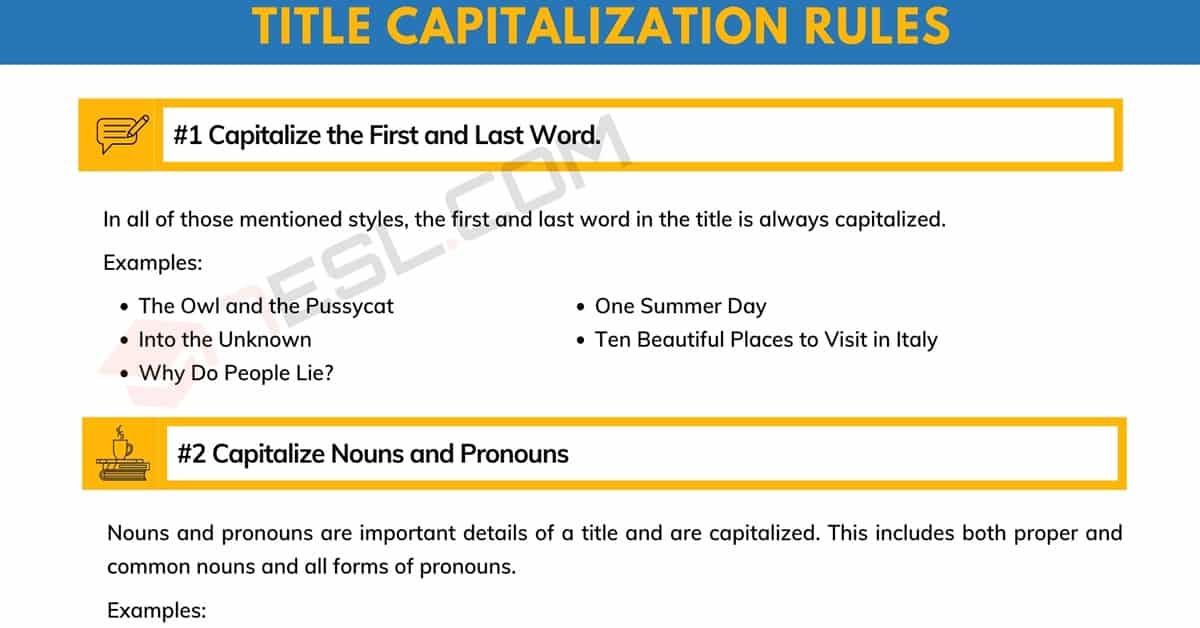 In addition to having a catchy title, writing it correctly with proper capitalization is a must in every article. Capitalization of titles is another one of the many things that are mistakenly done in writing. If you’re one who has a difficult time judging whether a specific word should be capitalized or not, feel free to continue reading this article. Below are the rules that you must follow in writing titles with correct capitalization.

There are actually four main title capitalization styles: the Chicago, APA, MLA, and AP style. They have guidelines that are slightly different from each other. However, in general, here are the common capitalization rules that you need to remember.

Capitalize the First and Last Word

In all of those mentioned styles, the first and last word in the title is always capitalized.

Nouns and pronouns are important details of a title and are capitalized. This includes both proper and common nouns and all forms of pronouns.

Verbs are essential parts of a title as it determines the action. Adjectives and adverbs serve as modifiers of the noun, pronoun, or verb that they follow. These three also need to be in the uppercase when applied in a title. Linking verbs are included in this rule.

Do Not Capitalize Articles

Articles include the words a, an, and the. They should be written in lowercase unless they are found at the beginning of the title.

Do Not Capitalize Short Conjunctions

A conjunction is a part of speech that is used to connect words, phrases, and clauses. Short conjunctions include the terms and, but, or, nor, and for. These words should be written in lowercase.

Do Not Capitalize Short Prepositions

Title capitalization regarding prepositions is quite tricky. Generally, short prepositions are written in lowercase. These include the words of, to, in, on, at, for, and many others. However, there are prepositional words that are being used as adverbs. You can tell if the preposition functions as an adverb if it is not followed by a noun. In this case, it should be capitalized. A term that can play both as a preposition and adverb is to. Additionally, it can also be used as part of an infinitive. If “to” is employed as such, it should not be capitalized.

The first element of a compound word with a hyphen should always be written in uppercase. The other elements are also capitalized unless they function as prepositions or conjunctions. If the first element is a prefix that cannot stand by itself, the second element should be written in lowercase.

Both elements of a spelled-out number or simple fraction that is linked by a hyphen require capitalization.

The first element of a scientific name is always written in upper case. The second is written in lowercase.

For more specific rules on title capitalization, handbooks are available for different styles. Be sure to note the appropriate guidelines according to the style you want to follow.