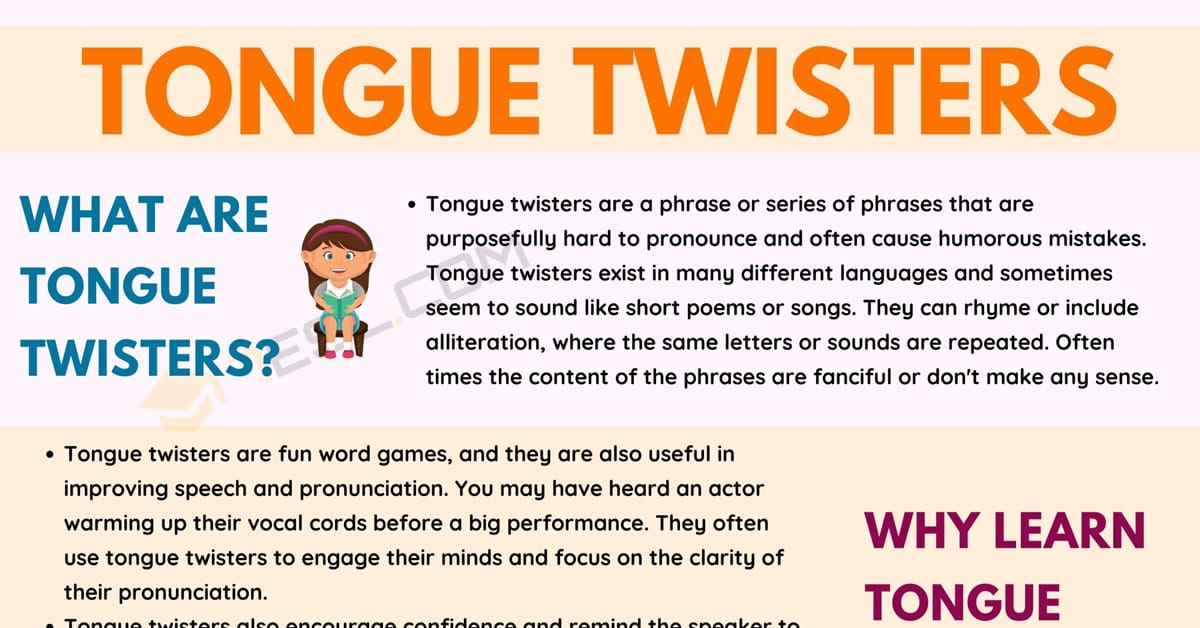 Tongue Twisters in English! Have you ever heard someone say a funny phrase like “If a dog chews shoes, whose shoes does he choose?,” and wondered, what are they saying? This is a popular example of a tongue twister. Tongue twisters are fun and nonsensical, intended to confuse both the speaker and the listener. They have been used since early English literature and folklore to both entertain and teach. The humor of tongue twisters is apparent when they are spoken rather than read silently.

What Are Tongue Twisters?

Tongue twisters are a phrase or series of phrases that are purposefully hard to pronounce and often cause humorous mistakes. Tongue twisters exist in many different languages and sometimes seem to sound like short poems or songs. They can rhyme or include alliteration, where the same letters or sounds are repeated. Often times the content of the phrases are fanciful or don’t make any sense.

There are also some tongue twisters that are based off of real people like Peter Piper and Mary Anning, who inspired a tongue twister about selling seashells. Regardless of meaning, the common characteristic of tongue twisters is that they are intended to be difficult to say and even cause mistakes. The goal is to pronounce the phrase correctly, and people can challenge themselves further by saying the tongue twister quickly or in repetition.

Most people think of longer series of complicated phrases when they think of tongue twisters, but they can also just be a few words like “unique New York” or “truly rural.” These shorter tongue twisters are used to help practice speaking with clarity.

Tongue twisters are fun word games, and they are also useful in improving speech and pronunciation. You may have heard an actor warming up their vocal cords before a big performance. They often use tongue twisters to engage their minds and focus on the clarity of their pronunciation. Politicians and public speakers like news anchors also use tongue twisters for the same purpose. Although it might sound funny to hear, it’s actually a great mental and vocal exercise that helps to improve the speaker or actor’s performance.

Tongue twisters also encourage confidence and remind the speaker to pace themselves and give proper attention to each word and syllable. Practicing tongue twisters is just like practicing any physical activity. The more you practice, the more your muscles learn and remember to properly pronounce the words. In fact, it’s not uncommon to find tongue twisters taught in public speaking and acting classes. Some people even believe that tongue twisters can help to cure hiccups, as the speaker has to focus and speak slowly and carefully, thus controlling their breath and pacing.

Tongue twisters are also commonly used as tools to teach kids how to speak English. This helps introduce more fun activities into the classroom, and varies the students’ lessons. For kids learning English, tongue twisters are particularly helpful to improve pronunciation and work through difficult sounds. This can also identify sounds that are different in their native language, which helps the teacher better focus on the individual student’s needs.

There are many fun tongue twisters out there that vary in difficulty. Some tongue twisters have even become popularized as songs like “I scream, you scream, we all scream for ice cream.” Here are a few popular ones you may have heard of. Try these quickly and in repetition and see if you can do them, but remember pronunciation is key!

1. How can a clam cram in a clean cream can?

which witch would watch which watch?

3. If a dog chews shoes, whose shoes does he choose?

He would chuck, he would, as much as he could, and chuck as much wood

If Peter Piper picked a peck of pickled peppers

6. She sells seashells on the seashore.

The shells she sells are seashells, I’m sure.

And if she sells seashells on the seashore,

Then I’m sure she sells seashore shells.

But she said the butter’s bitter

If I put it in my batter, it will make my batter bitter

But a bit of better butter will make my batter better

These sheep shouldn’t sleep in a shack;

Sheep should sleep in a shed.

10. I saw Susie sitting in a shoe shine shop.

11. Amidst the mists and coldest frosts,

With stoutest wrists and loudest boasts,

He thrusts his fists against the posts,

And still insists he sees the ghosts.

14. A tutor who tooted the flute tried to tutor two tooters to toot.

Said the two to the tutor, is it harder to toot or to tutor two tooters to toot?

19. When she shifts, she sips her Schlitz.

These are just a few examples of tongue twisters. There are many more fun and difficult ones to discover. The best part is finding the ones that are most challenging for you, as well as the ones you can say with ease. Practicing frequently helps to improve your vocal abilities and makes the more difficult tongue twisters easier with time. You can even try to write a few of your own or challenge your kids to make some as well. Either way, you’ll have a great time improving your pronunciation, vocabulary, and speech. 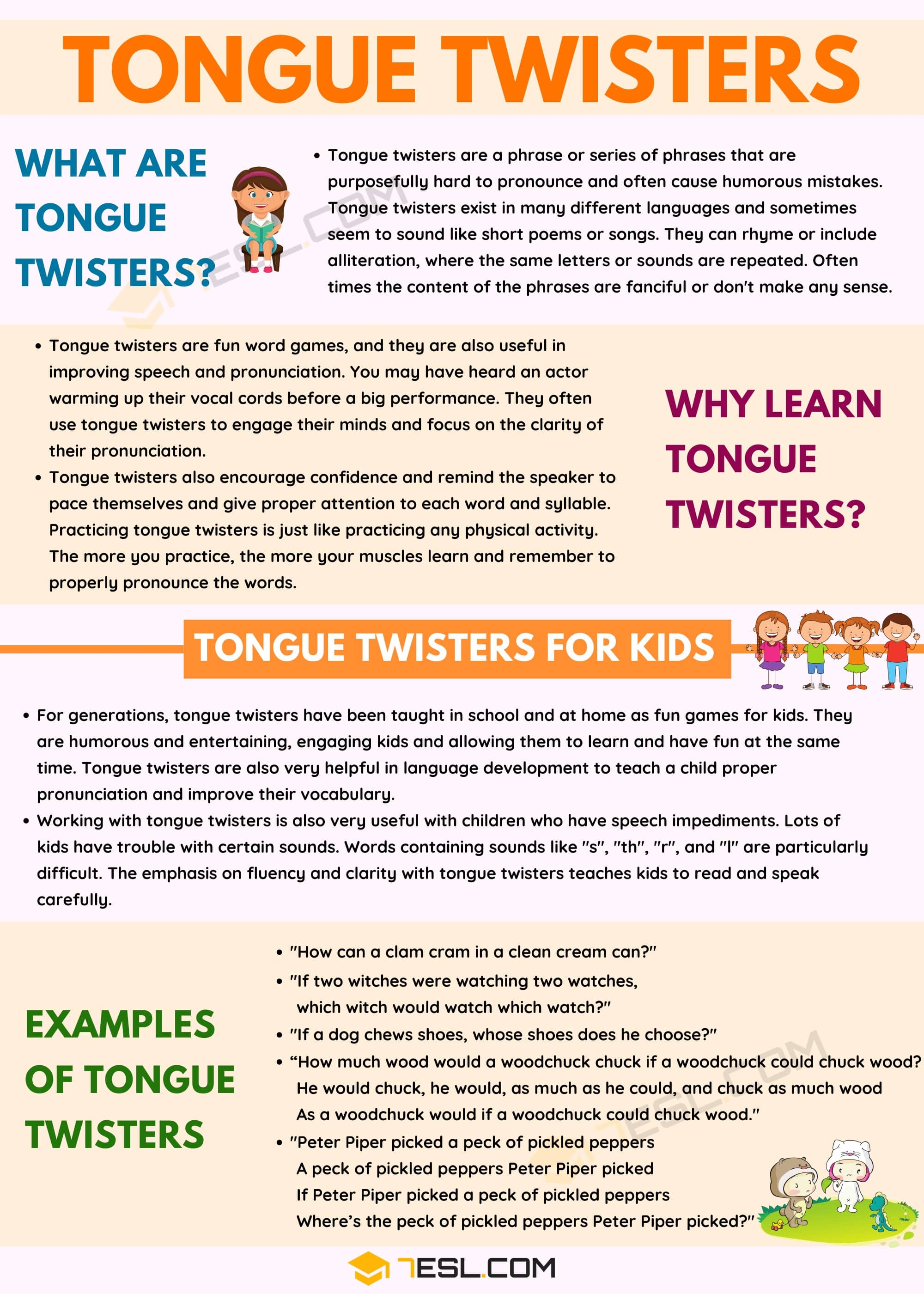 I scream you scream we all scream for icecream