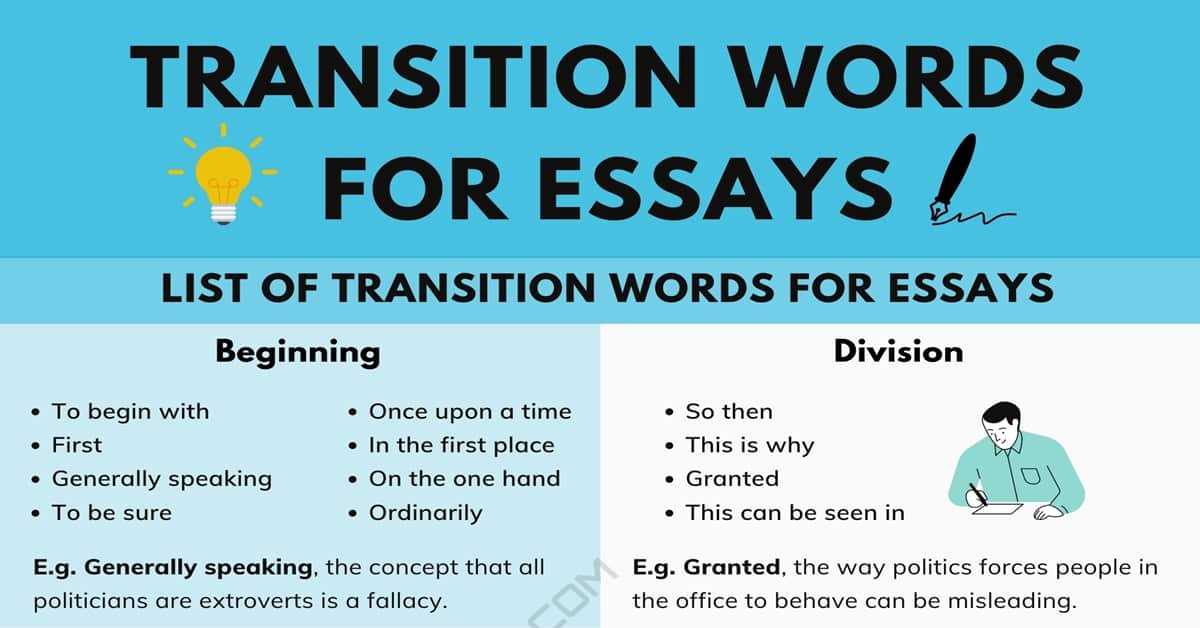 List of transition words for essays! All right, everyone in the world who enjoys writing essays, turn all your lights on for two seconds. Right…NOW! Whoa…was it our imagination, or did the world go black for two seconds? There is no denying that on a list of 100 hobbies and fun things to do, essay writing tops out at about 201.

But, like clipping toenails, sometimes you just have to do it. And if you are going to write an essay, you might as well do the best you can, and write one that is great! In this article, we are going to take a look at some important transition words for the essay. With these lists of transitions, you can do just that.

When writing essays, it is always important to know how to make a smooth progression from one subject or division to another. Otherwise, you will end up with a lot of brilliant information, but no one will be able to understand it. Transitions are street signs in writing. They tell the reader what street the writer is headed toward, and which thoughts need to be brought to the on-ramp – among other things.

In order to arrive at your destination, and impart knowledge – perhaps even causing someone to see your point of view on a topic, transitions are a necessity.

Following is a list of transition words for essays you can use to master your writing skill.

Some of these are a bit more argumentative than others. It’s smart to weigh the first words of an essay very carefully since they set the tone for the rest of the piece. Do you wish it to be thoughtful? Insightful? Assertive? Aggressive? That’s why we have transitions—

Example: Generally speaking, the concept that all politicians are extroverts is a fallacy.

Example: Granted, the way politics forces people in the office to behave can be misleading.

Example: For that matter, politics is simply misleading.

Now, unless your essay is bone dry, there will be more—much more—to it than just a couple of divisions and a conclusion. It will manipulate time like a Sci-fi writer, be more interesting than a romance novel, be as accurate as an atomic clock, and will stick in the reader’s mind like an old Temptation’s song. Transitions exist to help your essay do all of this. And they can serve very specific purposes.

Here are transitions that serve to…

Accent or Highlight a Point

These Accent or Highlight, but with a touch of drama, seeming to “stop the show”:

The difference between the two accent transitions is rather obvious. The top words are more laid back. The ones that add drama leave no wiggle room.

To manipulate time or the concept of time:

Example: Generally, politicians deserve to be pelted with tomatoes from that market. They can deal with cleaning their suits later on.

Example: Chiefly, irritating politicians with too much tan and bad hair deserve to pelted with tomatoes.

One transition which is often overlooked so far as importance is concerned is the comparison/contrast. This might be one of the most important in essay writing. In all forms of speech, really, because it shows the ability of the person speaking or writing to see other perspectives and weigh them in an intelligent, objective manner.

Example: Still, it would be a terrible waste of tomatoes, so we won’t pelt the politicians.

Along with the argument for or against something, is the expansion of an idea. These transitions help lay the foundation for taking an idea or thought, then adding more to it.

Expand on an idea

Example: Indeed, we need tomatoes right now. Politicians? Not as much.

When you are moving into the cause with its accompanying effect.

Example: Under these circumstances, I believe we need to ignore politicians and grow tomatoes.

Now you have the tools—the transition words for essays. All you need now is to remember a couple do’s and don’ts.

Transitions are great tools, but tools aren’t really usable unless the person wielding them understands how they are supposed to be used. When writing your essay, do it as required, then do the all-important task of reading and re-reading it. This will check for usage and flow.

This is a very inclusive list and nicely organized. Keep up the splendid work!