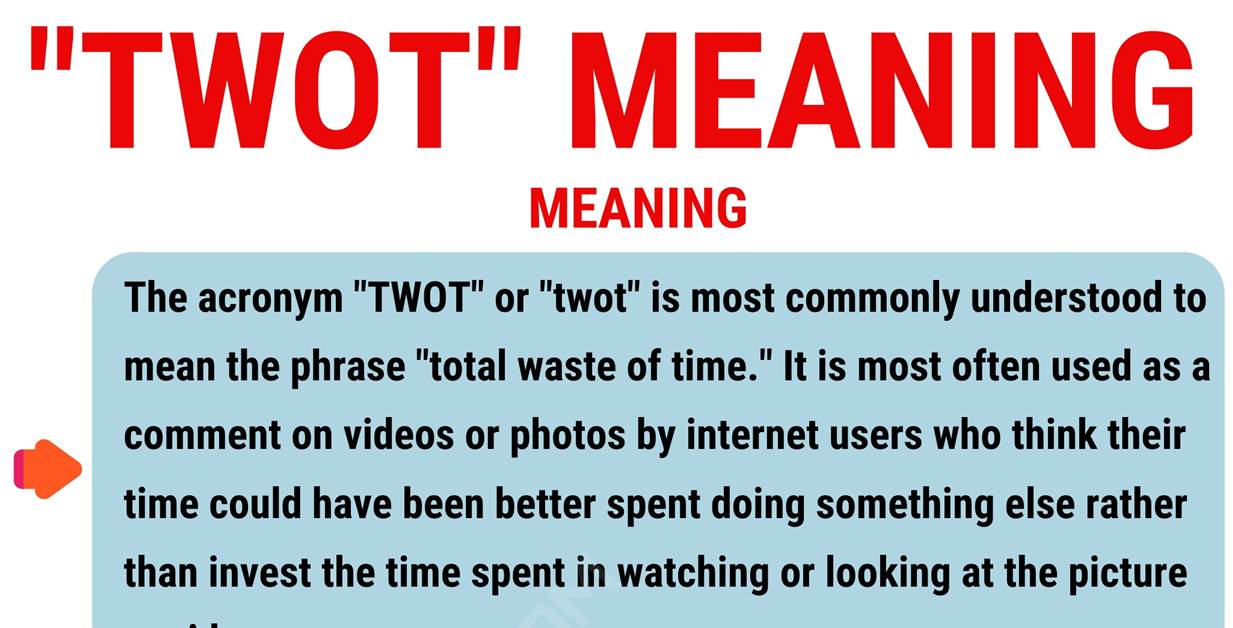 The acronym “TWOT” is one that is used popularly on the internet and in text conversations. If you ever wanted to know all about this acronym, then you have come to the right place. Here you will discover the meaning of this acronym, the origin of the phrase associated with the acronym, and possible other meanings that may relate to this term in any form. You will also see the acronym used properly in example conversations and see some alternatives to use in place of “twot” that convey an identical meaning.

What Does TWOT Mean?

The acronym “TWOT” is most commonly understood to mean the phrase “total waste of time.” It is most often used as a comment on videos or photos by internet users who think their time could have been better spent doing something else rather than invest the time spent in watching or looking at the picture or video.

The phrase “that was a waste of time” has been used for years in regular offline communication when someone felt they invested time that could have been better spent elsewhere. With the dawn of the internet, some of the popular phrases that already existed were reduced to acronyms like “twot” used to represent common phrases already spoken. These phrases were reduced to acronyms to make electronic communication easier, faster, and more convenient for users, while still allowing them to maintain a regular conversation. The exact year that the phrase first appeared and the acronym first appeared is unknown.

According to user contributions of the Urban Dictionary, the acronym “twot” can also be used as a stand-alone word for an alternate spelling of the insult “twat.” “Twat” is used to refer to a female’s vagina or can be used to describe a person who is useless and/or successfully getting on someone else’s nerves with their behavior.

There are several alternative ways you can say this acronym and still convey the same meaning. A few synonyms for this acronym include: