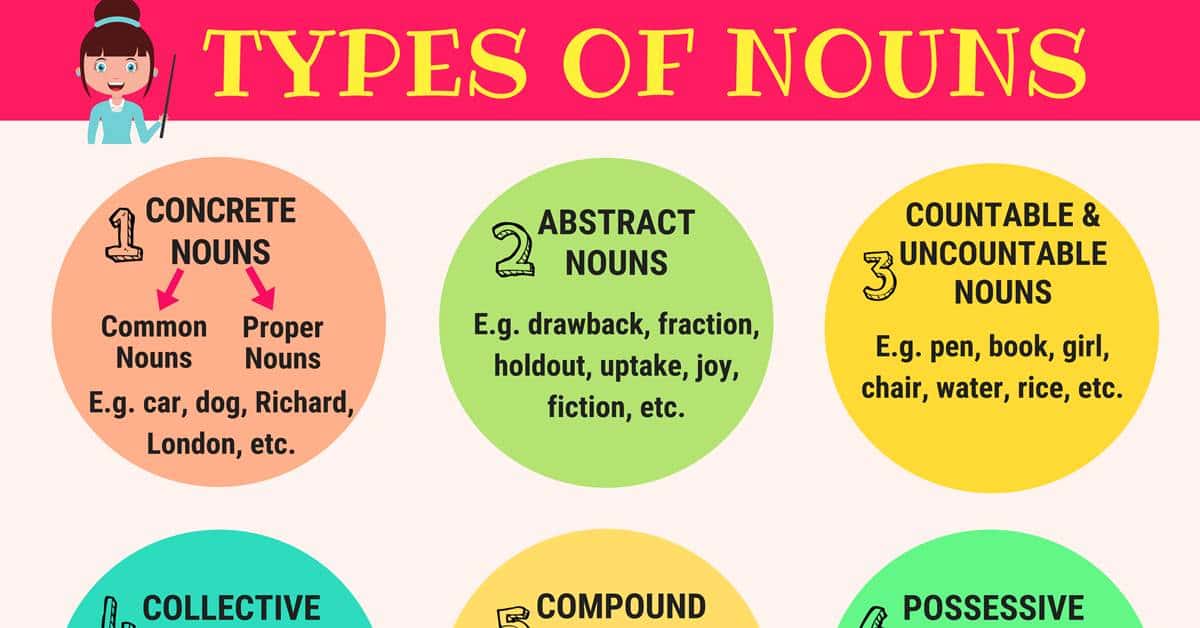 What are the different types of nouns in English grammar? You don’t know? Well, I’ll explain it to you. In this article, you will learn the various noun types and you will be given examples for each of them. When you are studying the nouns in the Standard American English language, you will have probably noticed that these types of words fall into several smaller subcategories.

Understanding the different types of nouns and what they are used for will allow you to use them correctly in your written and spoken language. Learning to use these nouns properly will give you the confidence to speak them as well as further your understanding of English grammar. In this article, you will also find examples of each noun as well as sentences to help you better understand the concepts.

We are going to be looking at the various types of nouns as well as what they are used for. This will give you the confidence in using them as well as furthering your understanding of English grammar.

What is a noun?

A noun is a word used to describe a person, place, thing, or idea. It is the most valuable part of speech in the English language. In a properly structured sentence, a noun can perform the function of the indirect object, direct object, object complement, subject complement, appositive, subject, or adjective.

Why are nouns important?

Nouns are arguably the most important part of speech in American Standard English. Nouns make up essentially all of the objects, people, and ideas that surround us in our everyday lives. Without nouns, we would not be able to communicate effectively with those around us. Nouns often answer questions such as “who”, “what”, or “when”.

Concrete nouns are people, places, or things that we can experience with our five senses (taste, touch, sight, hearing, or smell). They are tangible, unlike ideas or thoughts, which are abstract nouns. They can be singular, plural; and proper, or improper. If you are unsure if a word is a concrete noun ask yourself the following questions: Can you touch it? Can you hold it? Can you see it? Is it tangible? Can you smell it?

Concrete nouns can be divided into common nouns and proper nouns.

Common nouns are the opposites of the proper nouns. It is not anything, person, or place, in particular. They do not need to be capitalized unless they are the first word of a sentence.

A proper noun is any noun that refers to a specific thing, person, organization, corporation, team, or place. Proper nouns are to always be capitalized, whether or not they are used at the beginning of a sentence.

Abstract nouns are unlike concrete nouns. Abstract nouns refer to abstract objects such as ideas, thoughts, or concepts that can not be seen, felt, or held. They can be experienced or directed towards someone or something, however, they are not tangible. They include qualities that we cannot taste, feel, see, or smell. If you are unsure if a word is an abstract noun ask yourself the following questions: Can you touch it? Can you hold it? Can you see it? Is it tangible? Can you smell it? Is it something that is formulated in the mind or heart? Is it an emotion?

Collective nouns are a specific group of nouns that refer to groups that are made up of more than one individual or item.

The majority of English compound nouns include phrases that are composed of a noun modified by adjectives or another noun. They ordinarily are made up of more than two other words that can be constructed by joining two words at one time. Combining “mother”, “in”, and “law”, for example, can result in the compound “mother-in-law”.

A possessive noun is a noun that names who or what owns or has possession of something. In most cases, for singular nouns to show that possession, we add an apostrophe and the letter “s”. When making a pronoun possessive, however, you will not need to add the apostrophe.

Learn how to form regular plural nouns in English with examples.

Learn the difference between plural and singular nouns; and different ways to form Irregular Plural Nouns in English.

Countable nouns are simply nouns that have the ability to become plural and/or be counted. Singularly, they will most likely be preceded by the words “a” or “an”. The vast majority of nouns in the English language fall into the classification of countable nouns.

Uncountable nouns are simply nouns that do not have the ability to become plural and/or be counted. 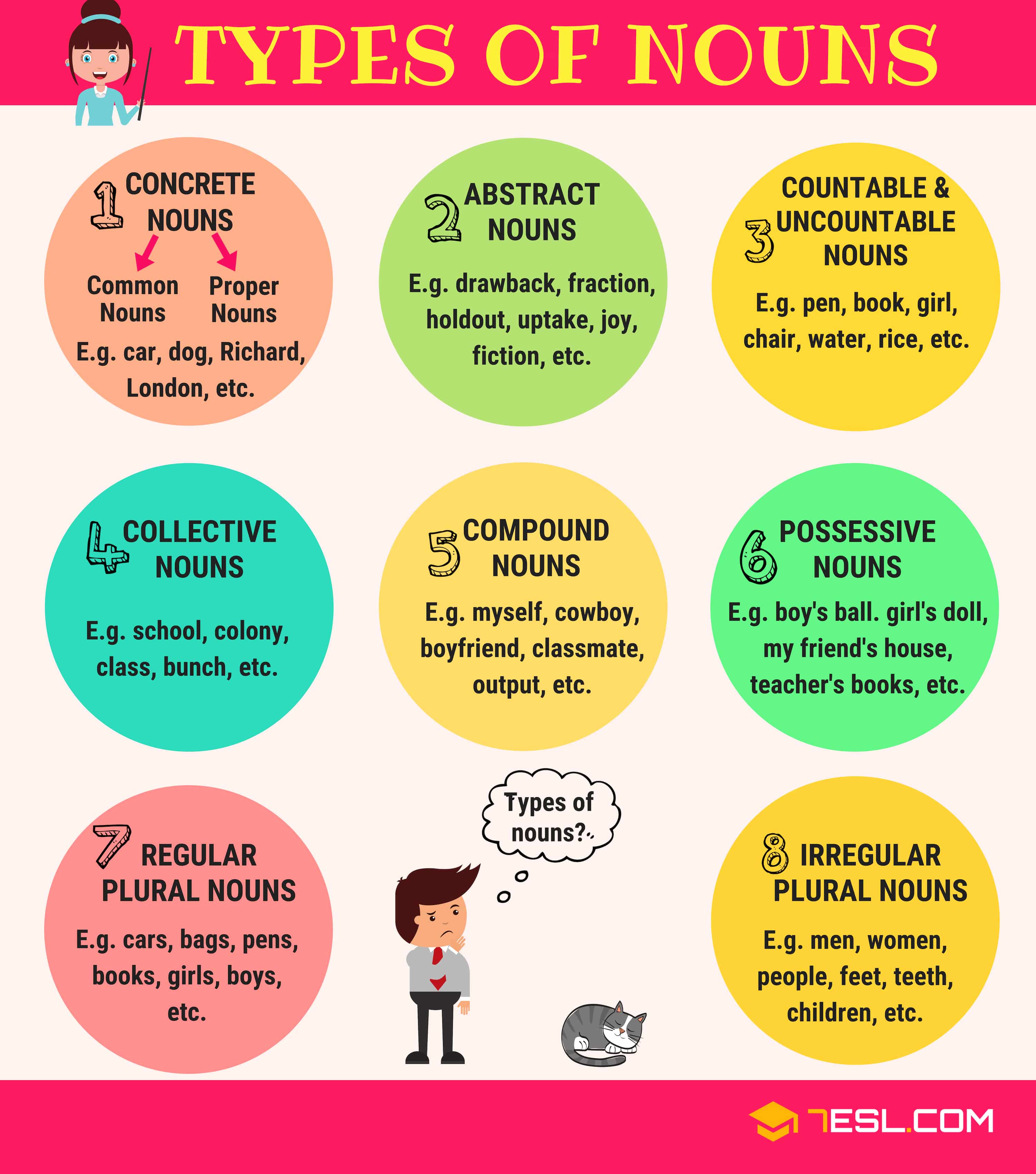 10 Types of Nouns in English with Examples

I appreciate all people that worked this wery beautiful job!

Thank you for this resource