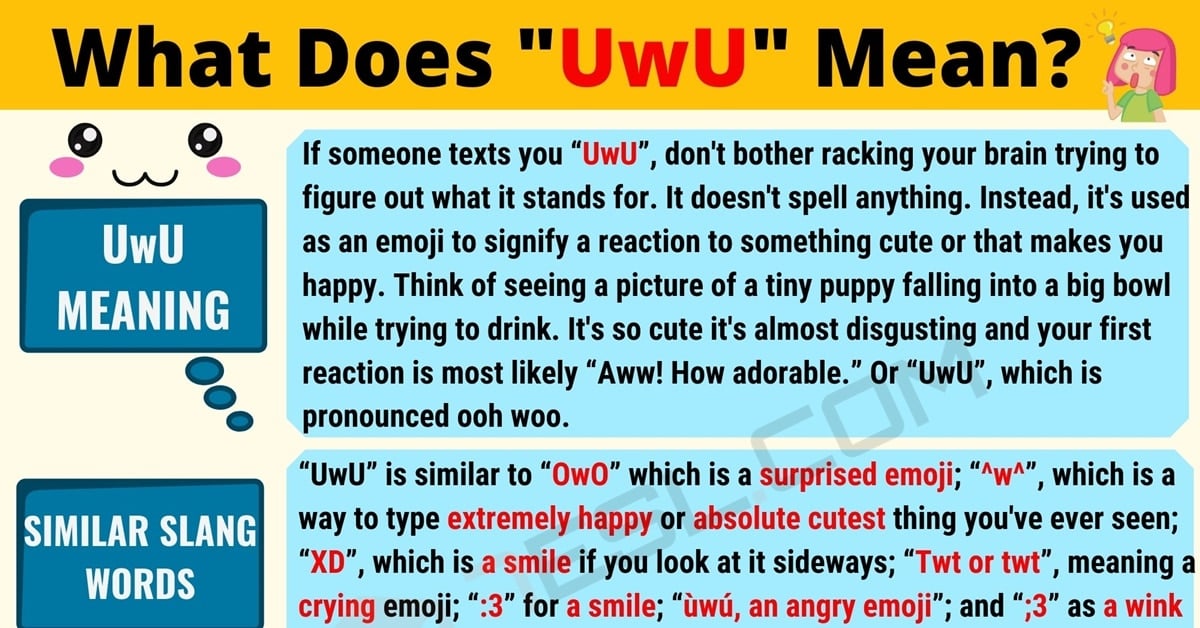 What does UwU mean? If you text a lot, like most of us do, you’ve probably seen the UwU emoji. What is UwU? When should you use it? We’ll be going in depth about this internet term, so you’ll know…

Normally, when you see a string of letters in a text message or online, it’s an acronym for a long-phrase, shortened by taking the first letter of each word and combining them together. Such as “IDK” is short for “I don’t know”, or “wyd” meaning “what are you doing?” Some of these could be easy to decipher without help, while others have us scratching our heads in confusion.

When a string of letters and characters get strung together, this confusion can magnify tenfold. This is usually because these acronyms aren’t shorthand words. Instead, they’re called emojis. Some of you have already seen the Emoji movie if you have kids, or you might use emojis yourself. But for those of you who don’t, emojis are little images that have facial expressions, used as a substitute for words, or to express an emotion.

Sometimes, these emojis will turn into a cute little yellow circle with a face. Other times, if the user is just using characters, you might end up with something like: “:) or ;)”. This is old school, and was being done before the new format of emojis came out. In some places, you’ll see this type of emoji used more often than the new-gen.

What Does UwU Mean?

UwU is used as an emoji to signify a reaction to something cute.

If someone texts you “UwU”, don’t bother racking your brain trying to figure out what it stands for. It doesn’t spell anything. Instead, it’s used as an emoji to signify a reaction to something cute or that makes you happy. Think of seeing a picture of a tiny puppy falling into a big bowl while trying to drink. It’s so cute it’s almost disgusting and your first reaction is most likely “Aww! How adorable.” Or “UwU”, which is pronounced ooh woo.

There’s no exact record of when “UwU” was coined, but most say that it occurred in 2005, when someone included it in their fanfiction work titled “Genie of the Puzzle”. This piece of fiction is based on the well-known anime series “Yu-Gi-Oh”. You most often see it being used by furries, littles (which are submissive sexual partners who like to display childish behavior), and in Japanese and Korean cybercultures, in which it reverts back to the original meaning of cute, or “kawaii”, but not generally sexual.

“UwU” can also be used to signify relaxation; as a way to flirt; “same”; “cool”; to be condescending; smug, or when you can’t think of a response but don’t want to be rude and not say anything. In the furry community, it can also be considered foreplay. A “furry” is someone who likes anthropomorphic animals, which basically means they like to make animals seem like humans, whether it’s by talking or giving them human physical features in art, film, or costume.

Furries often enjoy wearing animal accessories, such as cat ears, foxtails, or masks. Some furries go as far as to wear full head to toe costumes and might engage in sexual behavior while wearing them. Some people believe to be a true furry, you can’t just look like it but must sound like one as well, meaning using languages like “UwU” or “TwT”. “UwU” also became a popular song. 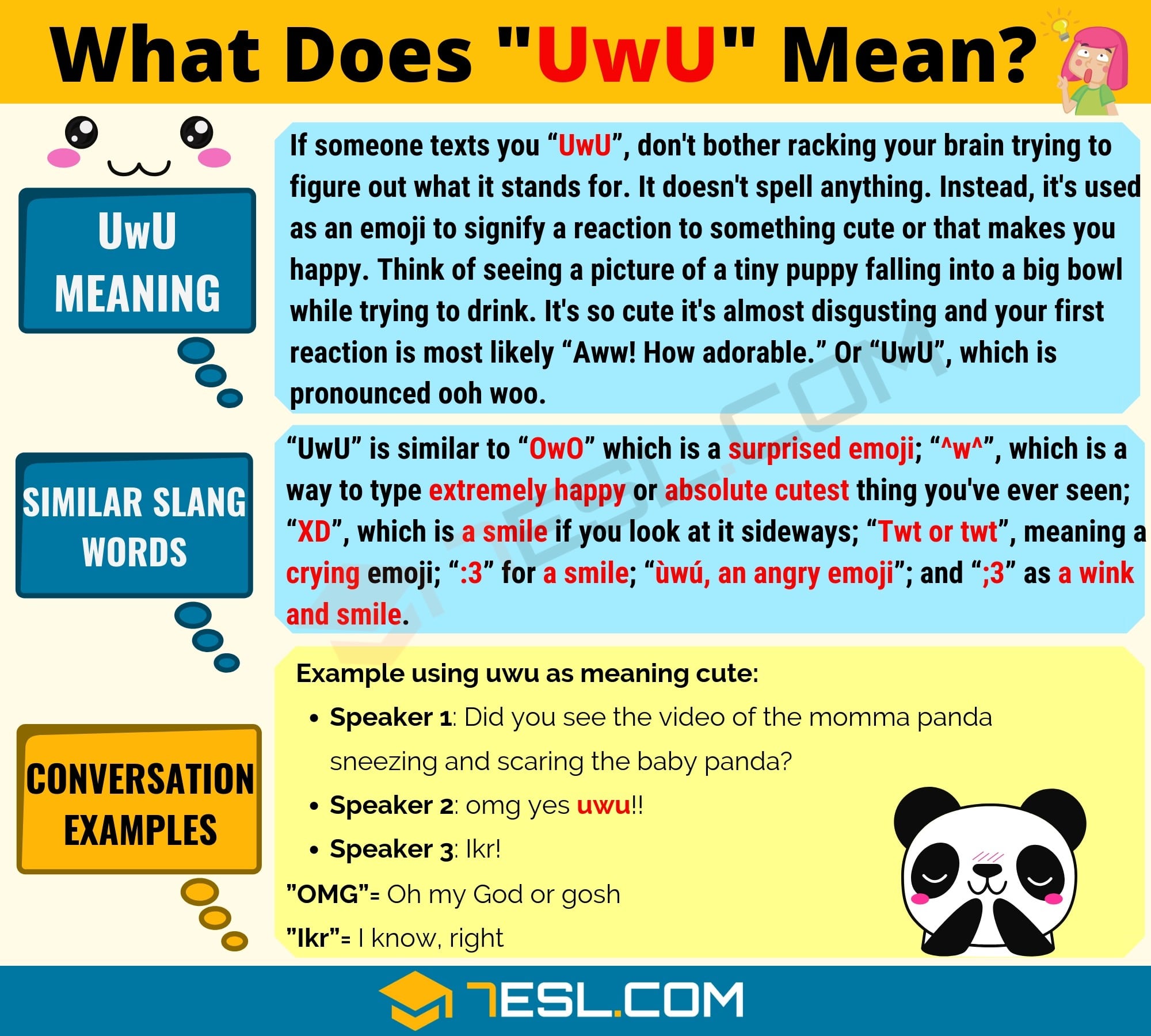 Ok, I know the is a really bad idea but.. im already here so here we f*****g go Rawr X3 pounces on you UWU YOUR SO WARM COULDNT HELP BUT NOTICE YOUR BULGE FROM ACROSS THE FLOOR NUZZLES YO NECKY WECKY MURR HEHE UNZIPS YO BAGGY PANTS OOF BABY U SO MUSKY TAKE ME HOME, PET ME, N’ MAKE ME YOURS AND DONT FORGET TO STUFF ME SEE ME WAG MY WIDDLE BABY TAIL, ALL FOR YOUR BOLGY-WOLGY KISSIES N LICKIES YO NECK I HOPE DADDY LIKIES NUZZLES N WUZZLES YO CHEST I BE GETTIN THIRSTY HEY I GOT A… Read more »

please stop this. come home we miss you.

james stop this. please your mother is in tears

James your coursework is still incomplete, please come to catch-up in my room after school.

Hello james UwU! You haven’t done your tier 3 twitch subscription or your 500$ a month onlyfans subscription to my channel! Just a reminder xoxoxo

Diem._. , we are sorry to inform you that you have been banned from Ubisoft club due to continuous harassment and racism on our popular game Rainbow Six Siege.

Your TFU key caps have been successfully been ordered. Would you like your keyboard to be signed by the famous band BTS?

no u
Reply to  james clode

Cheese👁👄👁
Reply to  jazmine catching predators reporting them to cops

Yall shut the f**k up

BROTHER WHERE HAVE U BEEN???

We are in hope for your health, please come back to your parents. Amen

Dear James! We are sorry that your 1500$ of merch hasn’t arrived to your house. Because you have bought the most Bullet proof boy scout merch we would like to invite you up onto the stage in our next tour! We will be visiting Chislehurst War Memorial for a one off tour! See you soon!

i love this app