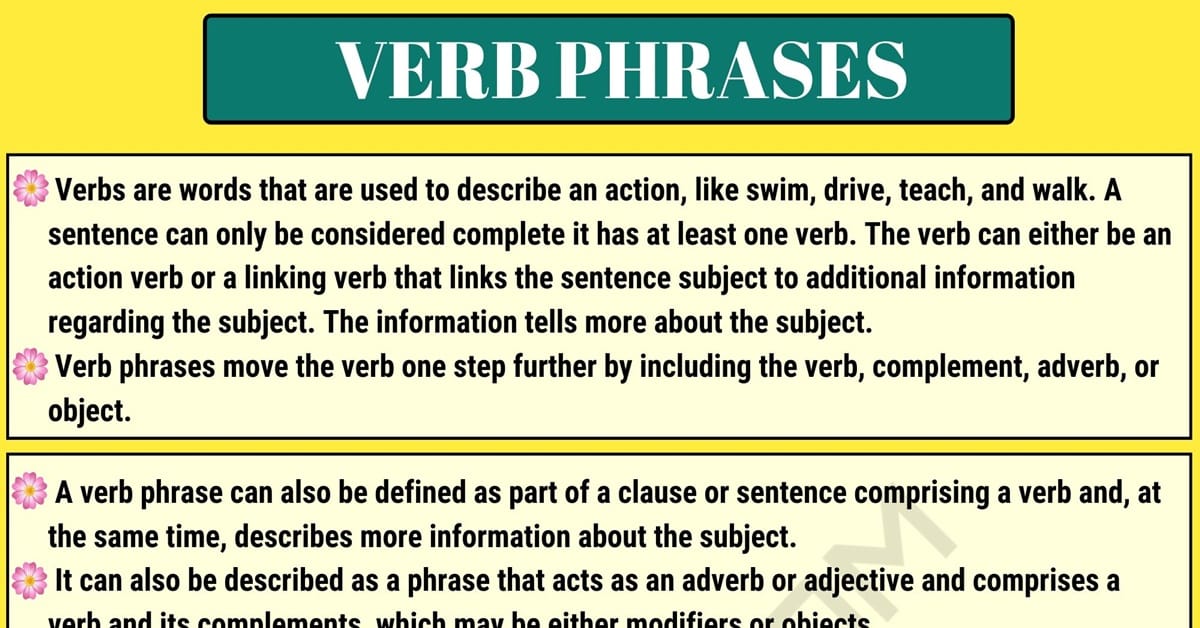 A verb phrase comprises an auxiliary verb and the primary verb. The auxiliary verb, also known as helping verb comes before the main verb. In this article, we are going to look in details of what verb phrases are and their examples.

What Is a Verb Phrase?

Verbs are words that are used to describe an action, like swim, drive, teach, and walk. A sentence can only be considered complete it has at least one verb. The verb can either be an action verb or a linking verb that links the sentence subject to additional information regarding the subject. The information tells more about the subject.

Active verbs are used to demonstrate doable activities, whereas linking verbs define conditions. The illustrated by the following examples:

Verb phrases move the verb one step further by including the verb, complement, adverb, or object. A verb phrase like “He was walking quickly to the bank” has a verb (walking) and a compliment (to the bank).

A verb phrase can also be defined as part of a clause or sentence comprising a verb and, at the same time, describes more information about the subject. It can also be described as a phrase that acts as an adverb or adjective and comprises a verb and its complements, which may be either modifiers or objects.

As a Predicate of the Sentence

Let’s look at some of the examples of verb phrase where the verb phrase functions as a predicate of a sentence. Here, the verb phrase comprises of the main verb and auxiliary verbs (also known as helping verbs).

As an Adverb or Adjective

Verb phrases with a single function can either act as an adverb or an adjective. The phrase would comprise of verb, modifiers, complements, or even objects. This is illustrated in the following examples:

Categories of the Verb Phrase

A verb phrase is said to be finite if there is only one verb phrase in a sentence. The head verb, which is categorized as finite, can either be in the present or past tense. For example:

This kind of verb phrase has the head verb as an infinitive, participle, and can even be a gerund.

Typical Applications of the Verb Phrase

Here “went” is the verb phrase.

Here “are going” is the verb phrase.

Here the verb phrase is “may need”.

“is traveling” is the verb phrase, and “overseas” is the complement of the subject.

Here “is concerned” is the verb phrase acts as a compliment of the objective phrase “about learning new languages.”

The use of verb phrases in your content makes it informative and eloquent and is very crucial to make your writing easily understood by your readers. 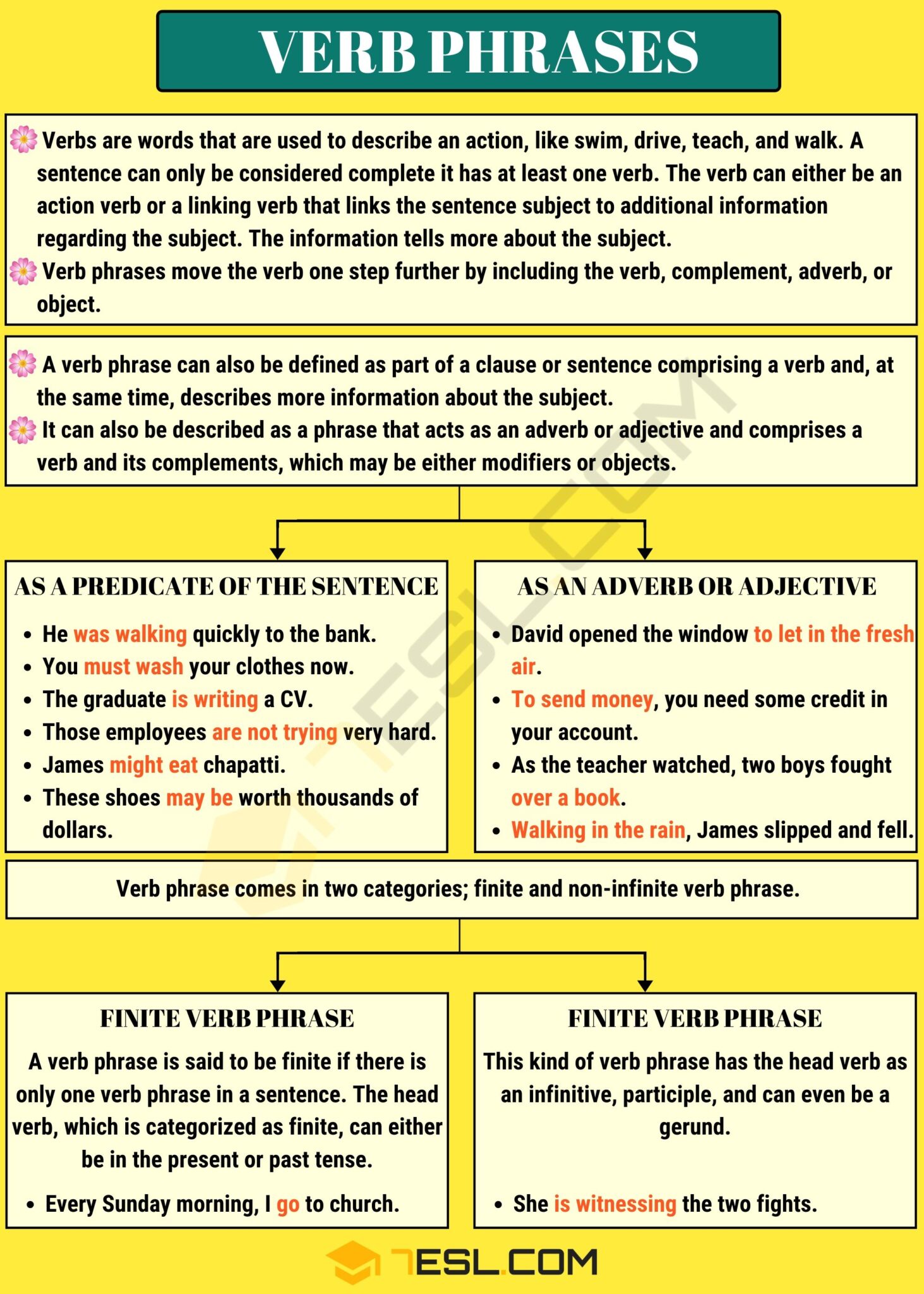 “The use of verb phrases in your content makes it informative and eloquent and is VERY CRUCIAL to make your writing easily understood by your readers.”

No. Wrong. Embarrassing. Fail. This is a grammar page. Crucial is an absolute. Something is either crucial or it isn’t. Nothing can be “very crucial”.

Dear Ian, maybe you should also work a bit on the manner you deliver a speech so that it doesn’t make others feel extremely uncomfortable. After all, the author has created much quality material to help everyone who is trying to learn the language. This is one of the best and complete free grammar pages I have come across. Mistakes can be corrected.

I disagree with you. “very crucial” is rarely used, and there is nothing wrong with that. It may be preferable to avoid it, but it doesn’t mean it is wrong. Here some examples were taken from famous websites; 2- it is very crucial that oil mist lubrication condition in branch pipe for oil mist particles in the pipeline transmission. 2. It is very crucial to calculate the coupling factor between cavities and to design the geometry structure of the coupling irises. 3. The establishment of credit investigation system is very crucial for that of the social credIt’system. 4. The establishment… Read more »

Please what is another name for verb phrase
Ki